Supervisor Diane Dillon said many people may not be aware of PG&E’s plans to shut down the power in high wind conditions.

“PG&E is actively engaged and planning for Public Safety Power Shutdowns. This year, they are expecting this will occur four to five times between July and November, when there is a high wind warning,” Dillon said during an Emergency Preparedness meeting held in mid-April at the St. Helena Fire Department.

Deanna Contreras, spokesperson for PG&E, confirmed what Dillon said in an email on Thursday.

“We anticipate that a Public Safety Power Shutoff could occur several times per year in PG&E’s service area although it is impossible to predict with complete certainty when, where and how often extreme weather conditions could occur given the rapidly changing environmental conditions,” Contreras said. “Because the energy system relies on power lines working together to provide electricity across cities, counties and regions, your power may be shut off, even if they do not live or work in an area experiencing high winds or other extreme weather conditions. This is done to ensure the safety of all communities and customers.”

Contreras added, “We want all of our more than 5 million electric customers to be prepared for this possibility no matter where they live or work.”

And, the power won’t be turned back on when the wind dies down until PG&E has checked all the lines, she added, “so that’s another 24 to 48 hours before they can restore power.”

“If there’s one message you can take away today, this is it: There can be no emergency, no earthquake, no fire, no anything else, we still all need to be prepared for this power shutdown,” Dillon added.

On their website, PG&E has “lots of great information,” Dillon said. Although PG&E is legally not required to notify people when they’re shutting down the power, they are engaged in informing people about their plans. To have PG&E send you notification of when the power’s going out in your neighborhood, you need to go to their website and, if you’re a customer, sign up.

PG&E will try to send customers alerts at 48 hours, 24 hours and just prior to shutting off power. This will be done through automated calls, texts and emails, Contreras said.

Calistoga residents and businesses experienced a mandatory turnoff in October 2018 during a high-wind situation that PG&E said threatened transmission lines feeding power to the town. The shutoff prompted complaints about lack of notice and economic losses to businesses left in the dark.

Living in a new normal

“We all know we live in a new normal,” Dillon said. “In Napa County, it has been a new normal for about five years,” listing the events from August 2014 to March 2018:

- The August 2014 earthquake, although it didn’t much affect the Upvalley, it “certainly affected us at the county — we just opened the courthouse two months ago” that was damaged in the earthquake. “It can take a long time to do recovery,” Dillon added.

- In 2015, the county had “what was then the second largest evacuation in the state, hosting 1,000 people from Lake County come from those wildland fires to our fairgrounds.” She said the county learned a lot about its emergency response following those September wildland fires.

- In January 2017, Napa County had major landslides, when the cliff above Silverado Trail came “crashing down” at Pratt Avenue. “We have roads that are still one lane in the western part of the county and a temporary bridge that still needs to be replaced,” she said.

- In March 2018, Dillon recounted, “We had an active shooter and hostage-taking situation in Yountville, which greatly affected that community.”

“We do emergency response pretty well in Napa County, because of our experience,” Dillon said. “There is only one responder for every 100 of us, so the better prepared we are when one of these events occurs, the better we’ll all be.”

Dillon said she has been attending lots of fire-related events in Sonoma County and they have a mantra that she thinks is key: “What we do before the next emergency is more important than what we do during or after.”

Dillon then introduced Jennifer Palmer, who is a project manager for the county’s Health and Human Services, although when the county’s Emergency Operations Center is activated, Palmer is the chief. “On an ongoing basis, the county provides training to all 1,400 of its employees, who can be activated during times of disaster,” she said. The training covers a wide range of topics, including evacuations, shelter operations and public communications.

Palmer addressed two alert systems, Nixle, which people can sign up for free by going to Nixle.com and clicking “sign up now;” and IPAS (Integrated Public Alert System), which she calls a significant improvement over Nixle.

IPAS is run through the Federal Emergency Management Agency (FEMA), which will send a message to every single cell phone within a certain geographic area, whether you’re registered or not. “If you are here during a time of extreme emergency and we activate the IPAS system, you will receive an alert on your phone,” Palmer said.

It is a way to quickly and effectively get a message to everybody during an emergency. “We encourage everybody to register for Nixle, but also know there is an added notification system through IPAS,” Palmer said.

Following the October 2017 wildland fires, the county sheriff’s department has also developed “evacuation tags” that can be placed on the front of your house or on your mailbox when you leave, so that emergency personnel are not wasting their time notifying a person who has already left the area.

Sgt. Chet Schneider said during the wildland fires “we were duplicating services as far as double-checking or triple-checking some residences, because we hadn’t confirmed they had been evacuated.” He added the sheriff’s department will be handing out the evacuation tags, which can be rolled up and placed with your emergency preparedness bag.

Sheriff’s Deputy Matt Macomber said they learned something else after the wildland fires: all emergency sirens sound alike. So, they developed a high-low siren that’s only used by the Napa County Sheriff’s Office that tells people there’s an evacuation coming. In the event of an emergency or natural disaster, “when we don’t have time to go door-to-door, we’ll drive through the neighborhood with the siren going,” he said. The sheriff’s office is the only agency that uses the high-low siren.

The next Emergency Preparedness meeting will be 6-8 p.m. Tuesday, May 21, at the St. Helena Fire Department on Railroad Avenue.

The 7 Ps of Preparedness

-People: Your top priority is always to ensure that all the people in your home get to safety. Plan with your family what you’d do in the event of an emergency. Make sure your vehicles have a full tank of gas.

-Pets: Plan for your pets, too. Keep carriers and leashes handy. Consider where your pets will stay if you can’t go home.

-PCs: If your personal computer is a laptop or notebook – something you’ll be able to pick up and take with you easily – consider keeping a record of your household inventory on it.

-Prescriptions: If anyone in the family needs to take prescription medication, make sure that they have a sufficient supply at hand.

-Photos: By taking a photographic record of your property and everything in it, you’ll speed up any insurance claims. Use a photo scanning service to digitize your prints, slides, VHS tapes or other visual media; keep the digital copies on a flash drive and upload them to an online storage account.

-Paperwork: Birth certificates, passports, insurance policies, deeds to property, etc. are all examples of valuable documents. Keep your important documents in a secure but easily accessible place, such as a lockable box.

-Phone: Keep your cellphone charged. If you have a smartphone, use this to help record your household inventory.

Steps to take now to be prepared

There’s an “Emergency Preparedness” button on the City of St. Helena’s website, cityofsthelena.org, that includes lots of information. There are nine sections, all of which take you to official government websites and information.

-Build A Kit, a list for basic supply kit, plus additional supplies needed;

-For earthquakes, fires and floods, each section tells what it is and how to prepare now, survive during and be safe afterward. Each includes associated content;

Applicants are being sought to be part of the Northern California Coastal Region of the American Red Cross.

The City of St. Helena and Napa County are planning two fairs with one purpose: Preparing for the next emergency. The first will be 10 a.m. to…

As a new year begins, I want to take a moment to acknowledge and celebrate the City of St. Helena’s organizational accomplishments of 2018. Th…

The wildfires that erupted throughout the North Bay, including Napa and surrounding counties, on Sunday, Oct. 8, 2017 were unpredictable, terr…

When a natural disaster knocks out major roads, it becomes extremely difficult to deliver food and emergency supplies and evacuate vulnerable …

The city of St. Helena’s 2019-2020 General Fund revenues and expenses are expected to top $15 million for the first time in the city’s history.

Problems with the Pratt Avenue bridge

At St. Helena’s Grace Episcopal Church, Sunday was a day of preparation in a season of expecting and preparing for the next disaster. 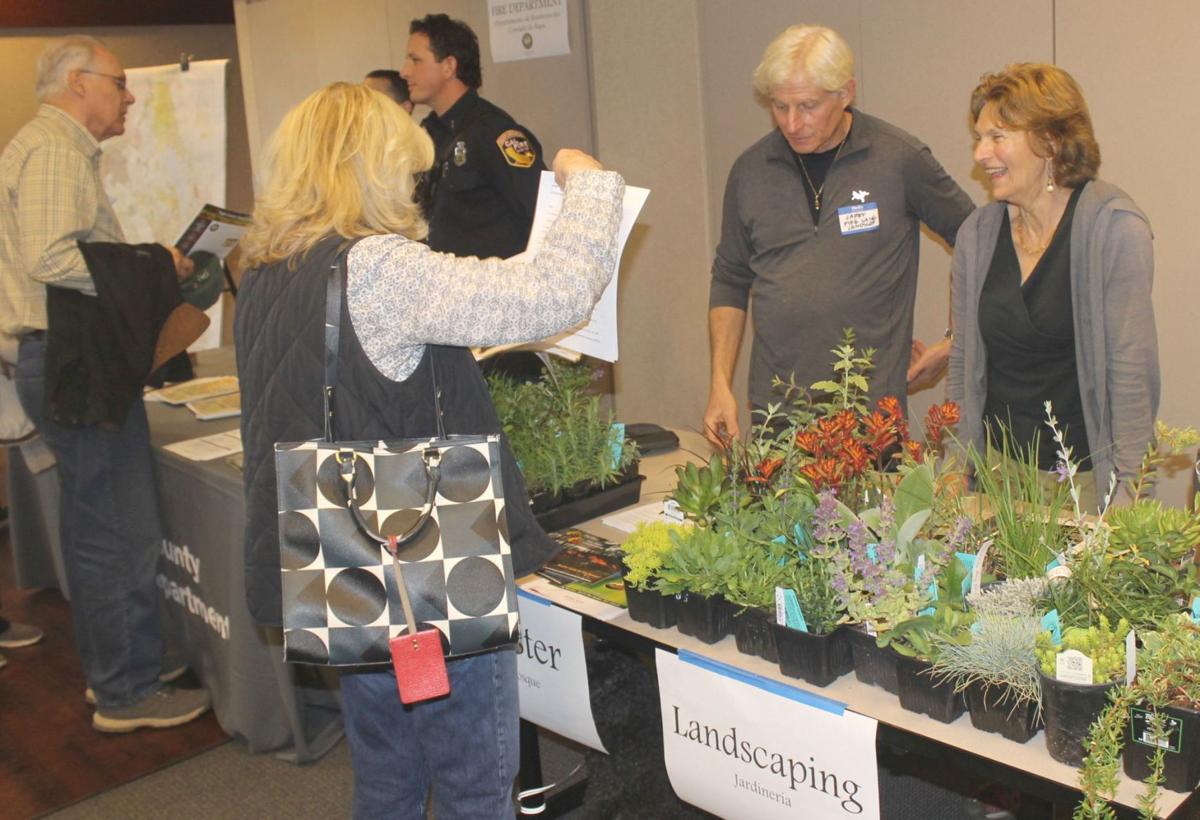 A number of emergency personnel, including CalFire, were on hand for the recent Emergency Preparedness meeting, held at the St. Helena Fire Department. Also on hand were Larry Rugoff from Fire Wise Landscaping and local landscaper Edie Kausch, who displayed a number of plants that create a landscape that is fire safe. 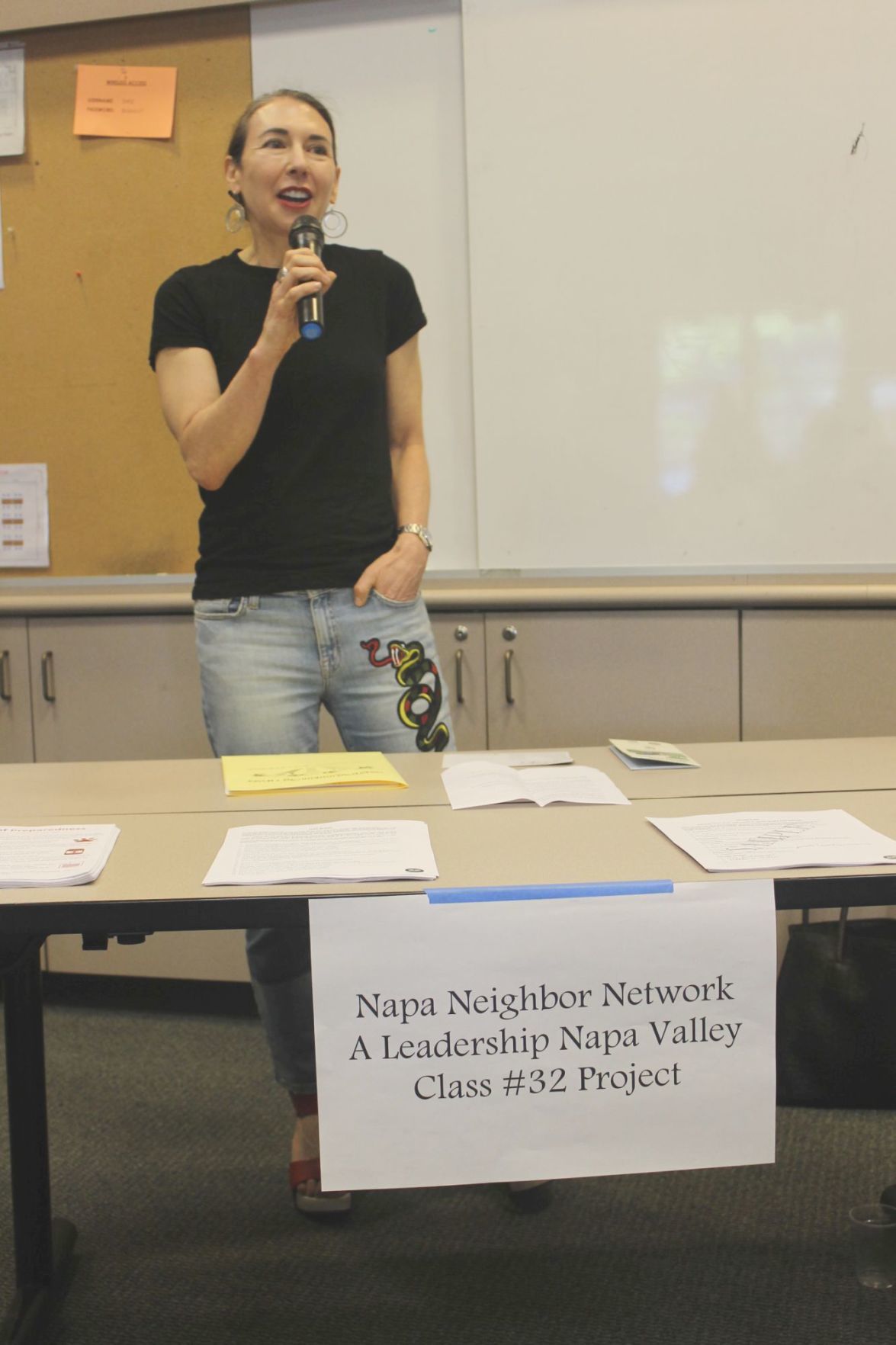 Angela Hoxsey, who is a member of Class 32 of Leadership Napa Valley, spoke on Saturday, April 13 about a class project called Napa Neighbor Network, a way for neighbors to get to know each other before a disaster strikes. 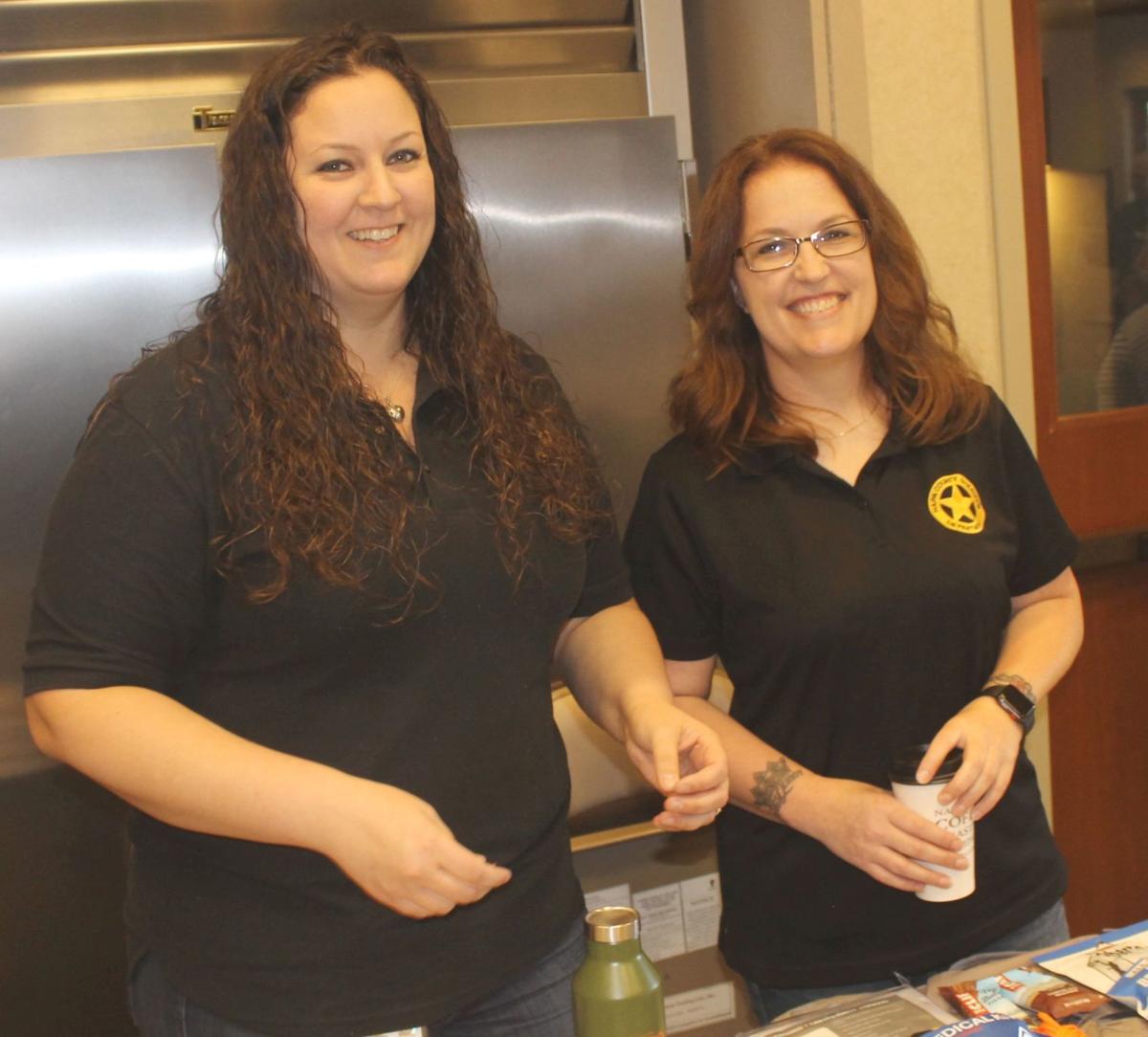 Cora Simmons, right, and Sarah Mitchell were part of the emergency personnel who spoke to the public at an Emergency Preparedness meeting, held Saturday, April 13 at the St. Helena Fire Department. They are both part of the records department of the Napa County Sheriff's Department. 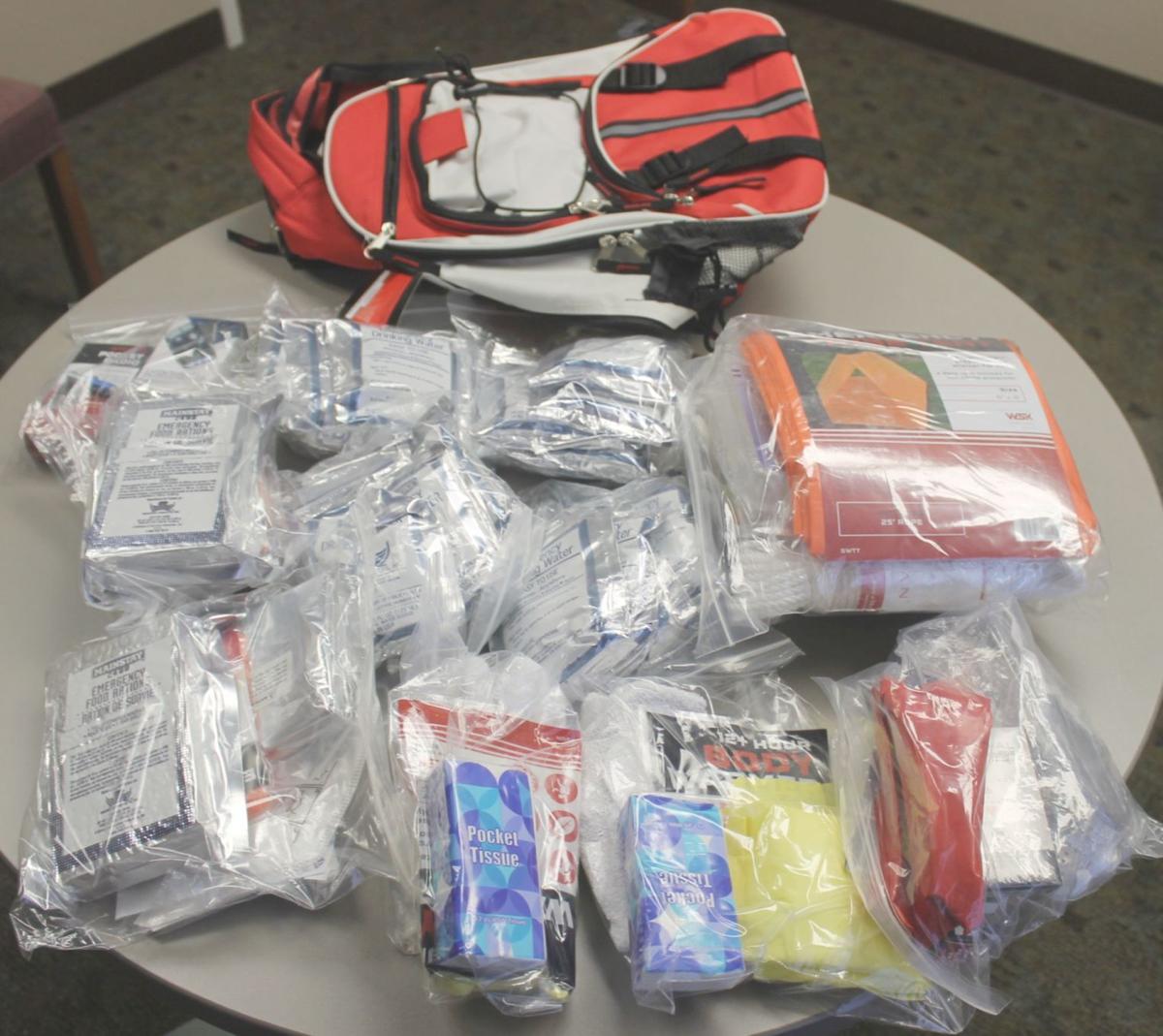 The contents of an emergency kit/survival bag includes enough food and water for two people for 72 hours. It also includes a portable tent, pocket tissues, gloves, tools, an emergency radio and flashlight and other items. 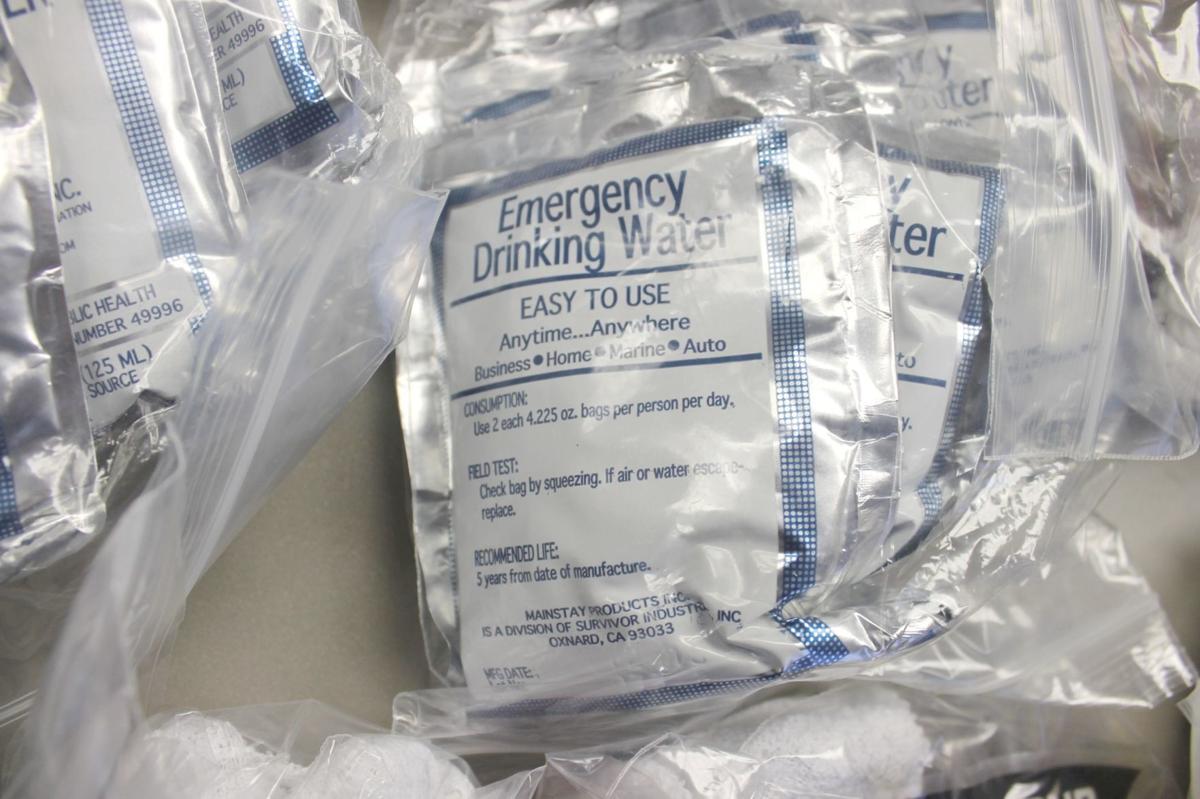 In the past few weeks, St. Helena Mayor Geoff Ellsworth has carried around his emergency/survival kit that allows two people to survive for 72 hours. The water and food are in small bags and are good for five years. The kit is available from the American Red Cross or Stealth Angel for around $120.