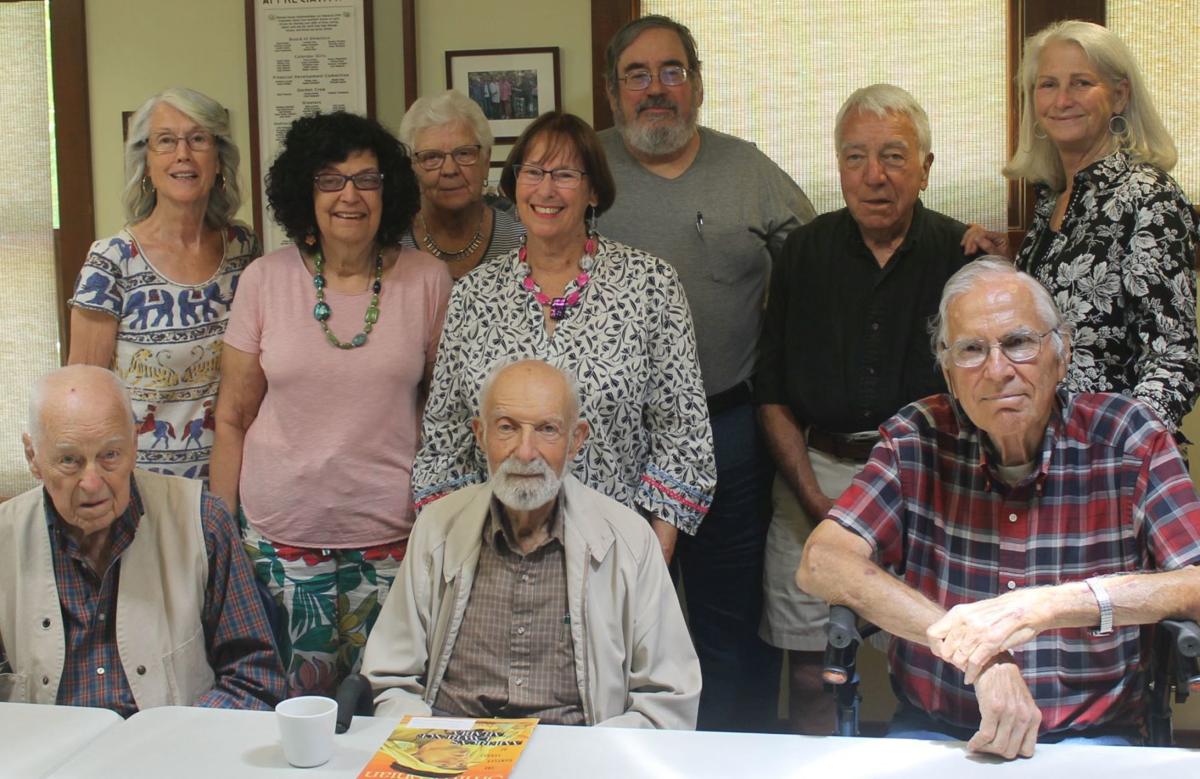 The current events group at St. Helena’s Rianda House Senior Activity Center gathered on Friday for a special request – to remember where they were on July 20, 1969, the day Neil Armstrong took the first steps on the moon. They are, front row, from left, Guy Kay, Bob Forest and Dave Kernberger. In the back, from left, are Ann Newton Holmes, Debbie Schlesinger, Catherine Singels, Jerri Patton, James Scanlan, Christophe Webber and Julie Spencer. 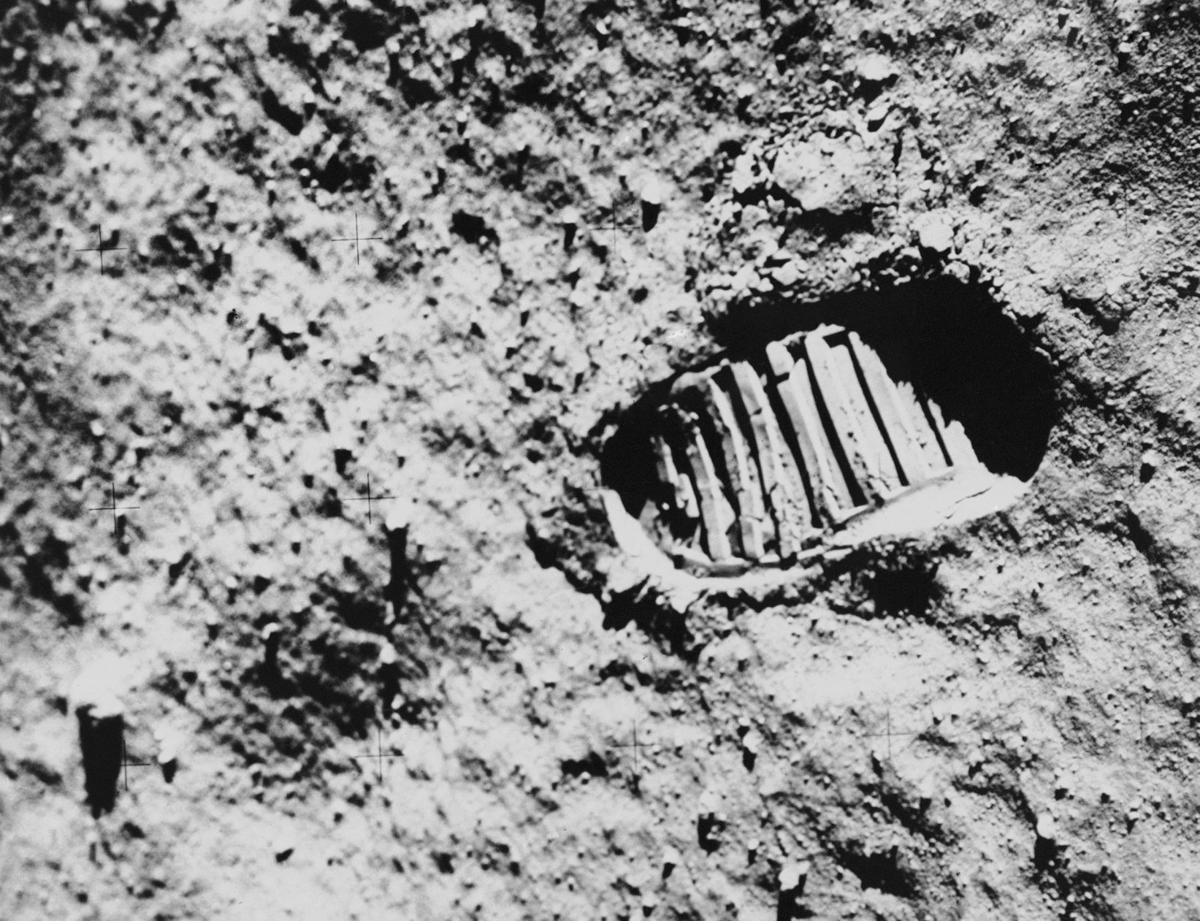 View of Astronaut footprint in lunar soil, Apollo II Astronauts Neil A. Armstrong. Michael Collins and Edwin E. Aldrin, Jr., were launched to the Moon by a Saturn V launch vehicle 9:32 a.m. EDT on July 16, 1969 in Houston, Texas from Complex 39A Caps Kennedy. Fla. Armstrong and Aldrin landed on the Moon on July 20, 1969 and, after take off from the Moon on July 21, joined Collins in the Command Module circling the moon. The astronauts splashed down in the Pacific Ocean and recovery was made by the U.S. S. Hernet at 12:50 p.m. EDT on July 24, 1969. (AP Photo)

The current events group at St. Helena’s Rianda House Senior Activity Center gathered on Friday for a special request – to remember where they were on July 20, 1969, the day Neil Armstrong took the first steps on the moon. They are, front row, from left, Guy Kay, Bob Forest and Dave Kernberger. In the back, from left, are Ann Newton Holmes, Debbie Schlesinger, Catherine Singels, Jerri Patton, James Scanlan, Christophe Webber and Julie Spencer.

View of Astronaut footprint in lunar soil, Apollo II Astronauts Neil A. Armstrong. Michael Collins and Edwin E. Aldrin, Jr., were launched to the Moon by a Saturn V launch vehicle 9:32 a.m. EDT on July 16, 1969 in Houston, Texas from Complex 39A Caps Kennedy. Fla. Armstrong and Aldrin landed on the Moon on July 20, 1969 and, after take off from the Moon on July 21, joined Collins in the Command Module circling the moon. The astronauts splashed down in the Pacific Ocean and recovery was made by the U.S. S. Hernet at 12:50 p.m. EDT on July 24, 1969. (AP Photo)

Fifty years ago, American astronaut Neil Armstrong made history by taking the first steps on the moon. He and his Apollo 11 crewmate Buzz Aldrin landed their craft and, more than six hours later, stepped onto the lunar surface.

On Friday, 10 people from the current events group at St. Helena’s Rianda House Senior Activity Center gathered to remember where they were on Sunday, July 20, 1969.

“I was in Flat Head, Montana at my grandparents’ house,” said Julie Spencer, Rianda’s executive director. “I was with my mom and sister and grandparents and there was a black-and-white TV in the living room and we all gathered around it.”

To watch Armstrong walk on the moon was a “big, big deal,” Spencer added. “It felt so strange to be in Flathead Lake, at a place we love, to be thinking of a person way up on the moon. It was very memorable to me.” Spencer was 11; her sister was 10.

Debbie Schlesinger said she was in Winnipeg, Canada with two small children, “a 2-year-old and a 3-year-old. My husband was teaching at the university for the summer session and I made the kids stay up late. They didn’t know what they were watching, but they knew that Mommy and Daddy were very excited.”

Schlesinger said they watched history unfold on a very small black-and-white TV set, with a fuzzy picture. “It was awesome. It was late at night, it was way past their bedtime and they were running around.”

Armstrong and Aldrin landed on the moon at 3:17 Eastern Daylight Time, which was 2:17 p.m., in Winnipeg. Armstrong stepped on the moon’s surface at 10:56 p.m. Aldrin joined him 18 minutes later.

On July 20, 1969, Christophe Ulrich Webber was on his honeymoon in Zermatt, Switzerland, a famous ski resort. He said he remembers going down into the town and “they had American flags all over. That was 50 years ago.”

Closer to home, Ann Newton Holmes and her husband were in Anderson Springs in Lake County, near Middletown. “My husband and I were house-sitting there while we started construction on our place in Deer Park.” She said the house was on a creek “and it was lovely.”

On that Sunday, her husband was home and “the two of us sat down and watched the television and there was a celebration going on. Everybody was all smiles” when Armstrong stepped onto the moon and spoke his famous words, “That’s one small step for man, one giant leap for mankind.”

The images on the television were fuzzy, Newton Holmes said, but “we were just thrilled. We knew the Russians had done their moon shot (they sent the first human in space, Yuri Gagarin into space on April 12, 1961) and (President John F.) Kennedy said we were going to the moon and we were going to step on it and he was absolutely right.” Kennedy spoke those famous words in a speech at Rice Stadium in Houston, Texas on Sept. 12, 1962.

In Ponca City, Oklahoma, James Scanlan was attending college, although in July, he was on a summer break. That day, he had been hauling hay and doing other farm chores, but he came home and continued following the coverage of the Apollo 11 mission.

“I was listening to Walter Cronkite, people telling us the latest news and then finally the word ‘go’ for the moon landing,” Scanlan said. He added he had read science fiction when he was younger and realized on that day, “We were finally in space. It was such a major step and it felt like a high point of the human race at that time. Everybody across the globe was celebrating it at that time.”

Cronkite, the anchorman for CBS News from 1962 to 1981, won many awards for his reporting, including for the moon landing. The journalist was widely revered “as the most trusted man in America,” according to an opinion poll.

In July 1969, David Kernberger was 28, a new Napa resident and a schoolteacher who’d graduated from Cal Poly in San Luis Obispo. On that Sunday, Kernberger was “with a lady who later became my wife (Kathy), at her aunt’s home in Rutherford, having dinner.”

Afterward, they watched the coverage on a black-and-white TV. Kernberger said he remembers more than anything else “the idea that not only was this (moon landing) a new thing, but we were actually seeing this live. It was amazing that the technology was possible to be able to see it as it was actually happening. I remember very clearly we were amazed.”

Jerri Patton watched the coverage of Apollo 11 on a “fancy” color TV at her mother-in-law’s house in Newport Beach. A high school friend was visiting from Tucson, and Patton was 25.

“I just remembered that I was so proud to be an American,” she said. “President Kennedy said he was going to do this and he did it. I loved that.” She added that her friend was Catholic and “in the middle of all of this, she went to Mass. I was praying for the astronauts, of course, and a lot of people went to church that day.”

Fifty years ago, St. Helenan Guy Kay was a supervisor at a company that owned a freeze-dried coffee plant in Sunbury, Ohio. “When the efforts to get to the moon started, we put the radio program about it on the address system in the factory. For the duration of the effort, everybody who worked in the factory heard it going on. I wasn’t there when the first foot went on the ground, but I’m sure they all cheered.”

St. Helenan Jeff Farmer is a part of Rianda’s current events group, but was on vacation on Friday. However, he did send his memories of the moon landing.

“I was 18 and a busboy in a local restaurant in my hometown of Port Chester, New York. I remember listening to the audio of Armstrong and Aldrin as they safely navigated to their landing. It was one of the few bright spots during the horrible ’60s. After that, I went to work on the evening shift at the restaurant.

“But my connection to Apollo runs a bit deeper. My father, Gene Farmer, was a senior editor of Life magazine. As you probably know, Life had an exclusive contract with NASA to tell the (sanitized) story of the astronauts and their families. Dad was part of the Life team to make it happen. In May 1969, I visited him in Houston to experience the control of the Apollo 10 flight. I met a few astronauts including Wally Schirra, who was a bit of a joker and he inducted me into an Army Air Force club for pilots called “The Turtles.”

“A year after Apollo 11, Little Brown (Boston) published the personal account of the three astronauts, “First On the Moon.” It was ghost written by my father and Dora Jane Hamblin.”

Farmer adds, “I just finished reading ‘Chasing the Moon’ a very vivid story of the history of rocketry from the late 19th century through the end of the Apollo program. There are many personal vignettes and side stories.”

Editor’s note: For the life of me, I can’t remember where I was 50 years ago, when Armstrong first walked on the moon. I don’t remember sitting in front of the TV, although I know I’ve seen Armstrong’s “giant leap” on video, including during the writing of this story. Growing up in Naperville, a suburb of Chicago, I could’ve been home with my parents, or I could have been with my uncle and aunt in Sausalito because I spent a month with them in the summer of 1969. Rianda House participant Catherine Singels is the same way. “I have no memories of that day,” she said. “I lived in New York and I remember it was very awesome, but where I was in New York, I have no memory.”