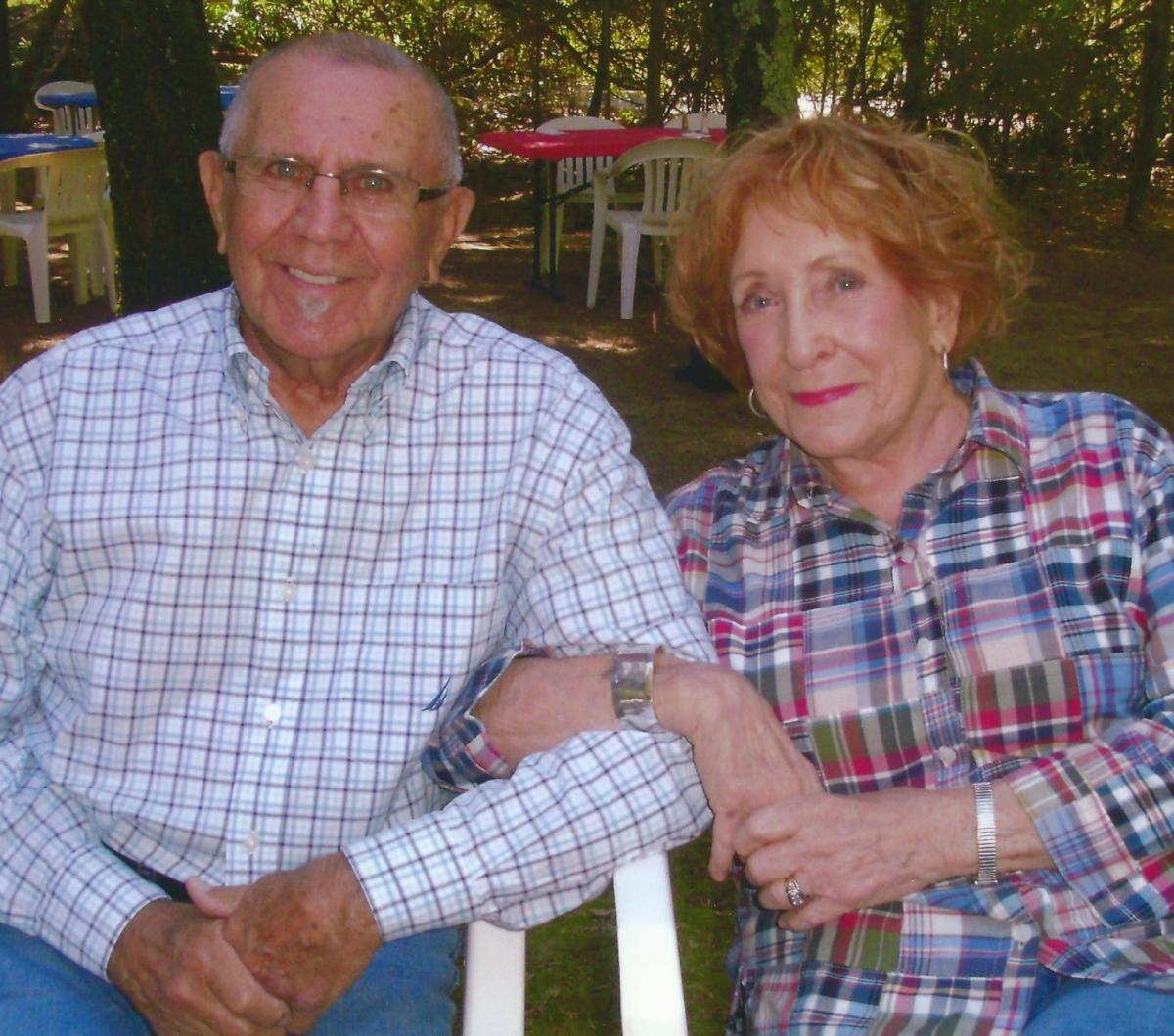 Former St. Helena residents Bob and Kate Skupny moved to The Orchards in Napa about eight or nine years ago. Bob passed away on Monday, May 11 at age 94. 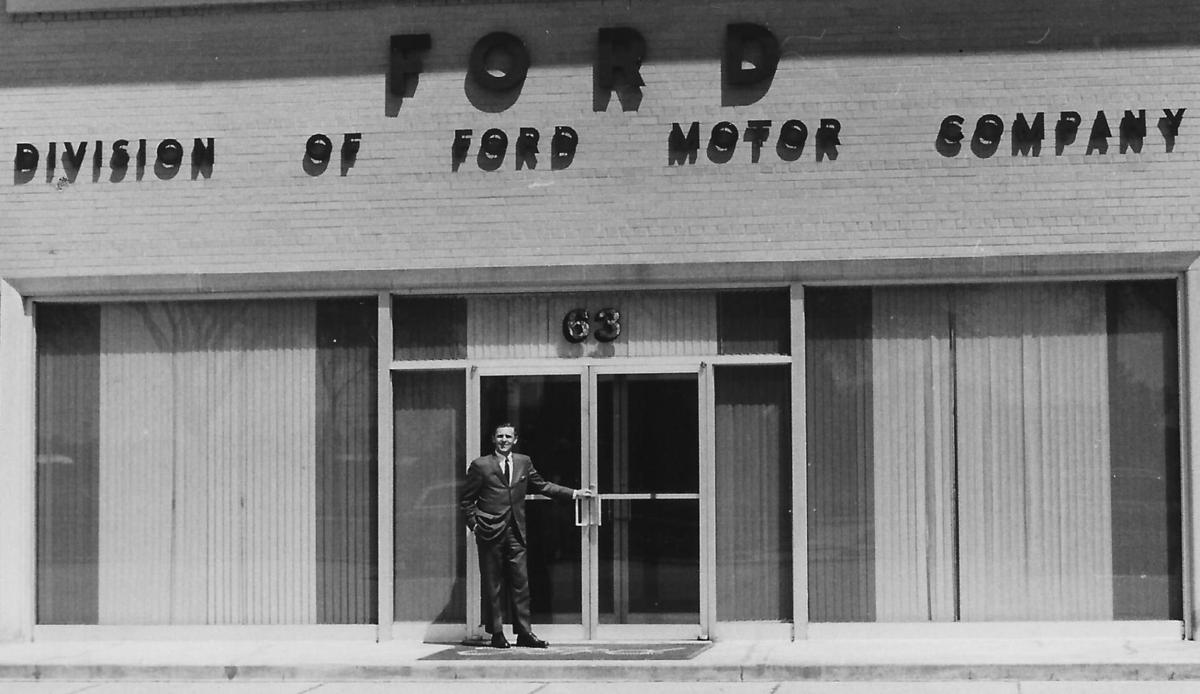 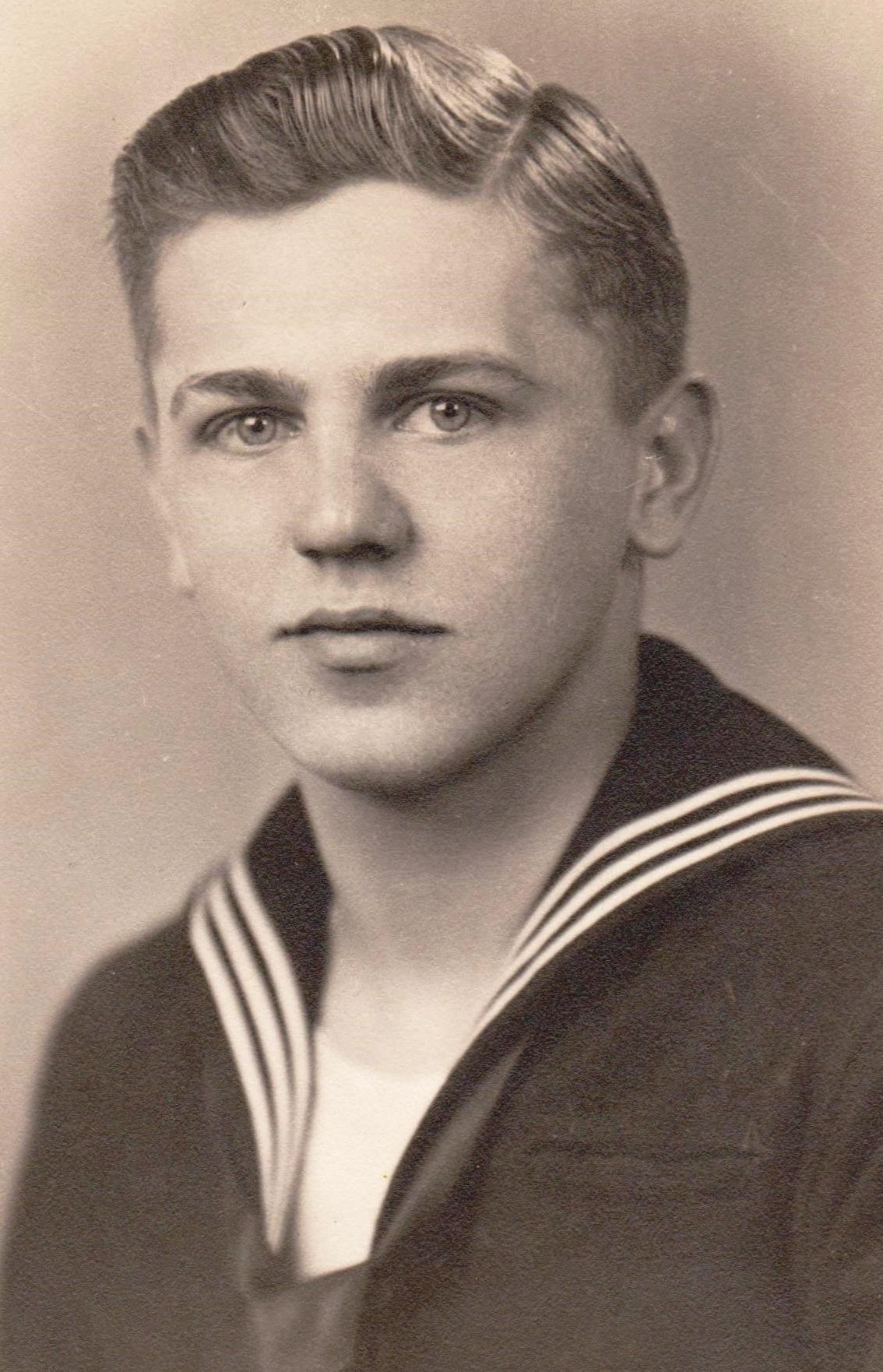 After graduating from Wilbur Wright High School in 1943, Robert "Bob" Skupny enlisted in the U.S. Navy and served during World War II near Normandy and was later stationed in La Havre, France. 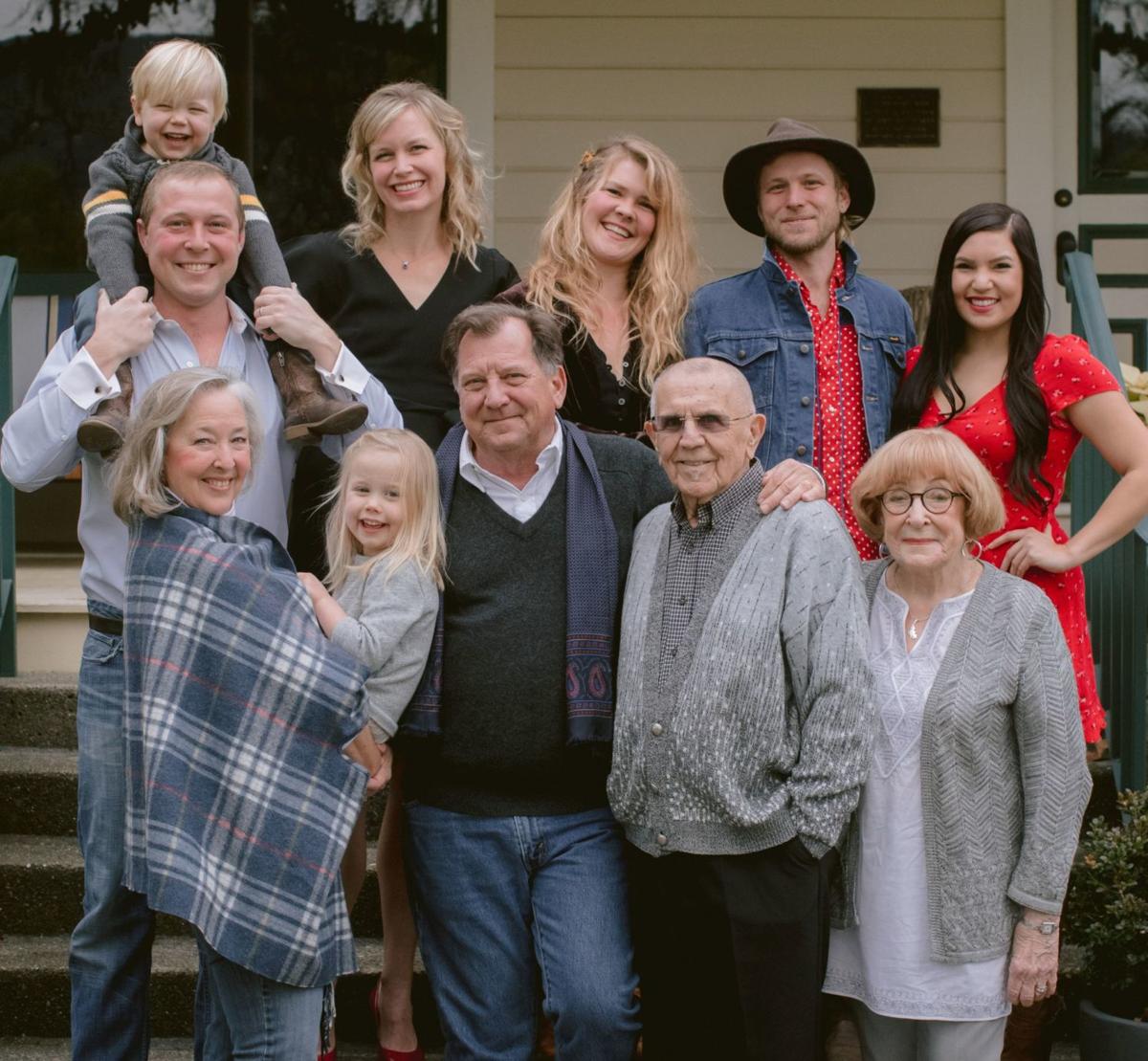 St. Helena's Bob Skupny family gathered for a photo. They are, back row, from left, Hawk, Reed, Megan, Rita, Jerzy and Alex. Front are Tracey, Felton, Joh, Bob and Kate Skupny. Bob passed away on May 11 at his Napa home.

Another member of the Greatest Generation has died.

Former St. Helenan Robert J. “Bob” Skupny passed away on May 11 at age 94 at The Meadows of Napa Valley, where he and his wife Kate had lived for the past several years.

His son, John Skupny, said, “My last sight of my dad was him being wheeled away from their apartment, covered in an American flag in honor of his WW II service. We can all raise a toast to him for a life well lived.”

Bob’s life was split into two parts: The first was growing up in Detroit, serving in World War II, graduating from the Lawrence Technological University, marrying and raising children, and having a 31-year career with the Ford Motor Company.

The second was in St. Helena, where he and Kate spent time with family and volunteered for more than a dozen Napa Valley nonprofits. Additionally, Bob worked part-time for 18 years for a now-closed St. Helena winery and helped his son, owner of Lang & Reed Wine Company, understand how business worked.

After a couple of up-and-down months of health issues, Bob Skupny announced, in his typical decisive manner, that he was ready and went into hospice care.

“(Hospice) said he would probably last around 72 hours and they were right, he slipped away on Monday, May 11,” Skupny said. In spite of the complete lockdown because of the coronavirus pandemic, Skupny added, “We were allowed access at the points in which they needed our help.”

In the early 1990s, a few years after Bob and Kate moved to Vineyard Valley, father and son were in a garage in the back of the Nieman-Coppola estate in Rutherford. They were looking at two cars, a Cord and a Tucker. John tells the story: “Dad says to me, ‘Do you know the difference between these two cars?’” John’s reply: “Yeah, about 25-30 years.” Bob told his son, “No, no, no. That’s a classic,” pointing to the Cord, “And, that’s an oddity,” as he pointed to the Tucker. “It’s a one-off.”

Bob should know with the 3 decades at Ford, from 1951 to 1982, when he retired. After serving in the U.S. Navy in World War II, Skupny used the G.I. Bill to attend the Lawrence Technological Institute, and graduated in 1950. His first job was in the tractor division at Ford.

“Well, obviously, a kid born in Detroit has some options, but one of them happens to be that he could probably get a job working in the automobile industry,” Skupny said.

The elder Skupny’s career with Ford involved a lot of moves, living in Detroit, Minnesota, Chicago, Kansas City and again in Detroit. After a few years in the tractor division, Skupny was in charge of first minor, then major parts depots. His son said a parts depot “manages about 6 million parts. One time, it was all picked and packed by sight. Then they started doing scanners, all in real-time inventory.”

At the end of his Ford career, when the family moved back to Detroit, Bob was assigned to special operations, solving problems of warehouses in the future. “He managed a group of 15 young engineers, who were transferring all the records to computer. And my father was brought in to say, ‘That ain’t going to work,’” his son said.

After a couple of years in Lawrence, Kansas, Bob and Kate Skupny followed their son and daughter-in-law, John and Tracey Skupny, and moved to St. Helena in spring 1986.

When Bob and Kate moved to Vineyard Valley, “they were the youngest people in the whole community,” Skupny said. “Everybody loved them there because they had a lot of vim and vigor.”

They both got busy with their volunteer work. Kate was part of the Federated Women and a new neighbors’ league. Bob volunteered at the elementary school, administering spelling tests to fifth-grade students. “He’d do a day of training, then two days later, he’d do the test. He got to know all the teachers,” Skupny said.

Both volunteered for Auction Napa Valley (ANV) and were year-round volunteers at the Napa Valley Vintners, spending one day a week at the offices, stuffing enveloping or wrapping booklets. During ANV, the Skupnys first were part of the wine service and then security for the press table.

Volunteering was part of their social fabric, their son said -- to give back. “They weren’t particularly wealthy, so it wasn’t possible to be philanthropic financially. They just gave their time,” Skupny said. The two volunteered for things they really liked.

Even though Bob was a part of the “Mad Men” era, where there were martinis for lunch, a daily cocktail hour and bottles of good scotch, he never really drank during his career, because wine gave him headaches. But he was curious about wine, his son said. “He’d see all these guys bring big wads of money to buy Caymus Special Selection, and he’d shake his head,” Skupny said. “All that fuss over a little grape juice.”

Bob signed up for a wine appreciation class and then took all the wine classes, taught by Richard Miami, offered at the Upper Valley Campus of Napa Valley College. “We’d talk about it and the wine didn’t seem to bother him. There were no more headaches and he started to really like it.”

Bob helped his son at Caymus, stuffing envelopes, and then got a part-time job at St. Helena’s St. Clement Winery, where he worked a half day a week and then one day on the weekend.

“He was a weekend warrior and a fixture there. A lot of people thought he was the owner,” Skupny said, working first with Dennis Johns and then Aaron Pott. He worked there for 18 years and when Beringer bought St. Clement, they brought in all the employees and did threshold tastings to test their knowledge of wine.

“My dad’s ability to perceive wine was rock-steady, middle America,” his son said. “He could describe something and not get too flowery.”

A bottle of Champagne

A few years ago, after Bob and Kate had moved to Napa, the family gathered for Sunday dinner.

“My dad brings out a bottle of Champagne,” which was unusual, because the elder Skupny “was a red wine drinker. He had a bottle of bubbly in his hands and he told us, ‘I just wanted to make a little toast. I just wanted to let you know, as of last Wednesday, I’ve been retired from Ford Motor Company longer than I worked for them,’” Skupny said. His father crowed that the actuaries had it all wrong, “They didn’t count on me living past 65,” he said. At the time, the elder Skupny was 85 or 86.

Skupny said his father was “sometimes so level-headed it would drive you nuts. He’d always have that sense of moderation about everything, which was really good.” Additionally, Bob had a lot of wisdom — some of it was funny, some of it was not suitable for print. He had great sayings and an understanding of how business worked.

“He said, economics is really easy. When your outgo exceeds your income, your upkeep will be your downfall. That’s all you gotta remember.”

A timeline of Robert J. Skupny

1980 —  John and Tracey moved from Kansas City to San Francisco

St. Helena has a new tasting room, for Lang & Reed, on Oak Avenue.

Former St. Helena residents Bob and Kate Skupny moved to The Orchards in Napa about eight or nine years ago. Bob passed away on Monday, May 11 at age 94.

After graduating from Wilbur Wright High School in 1943, Robert "Bob" Skupny enlisted in the U.S. Navy and served during World War II near Normandy and was later stationed in La Havre, France.

St. Helena's Bob Skupny family gathered for a photo. They are, back row, from left, Hawk, Reed, Megan, Rita, Jerzy and Alex. Front are Tracey, Felton, Joh, Bob and Kate Skupny. Bob passed away on May 11 at his Napa home.