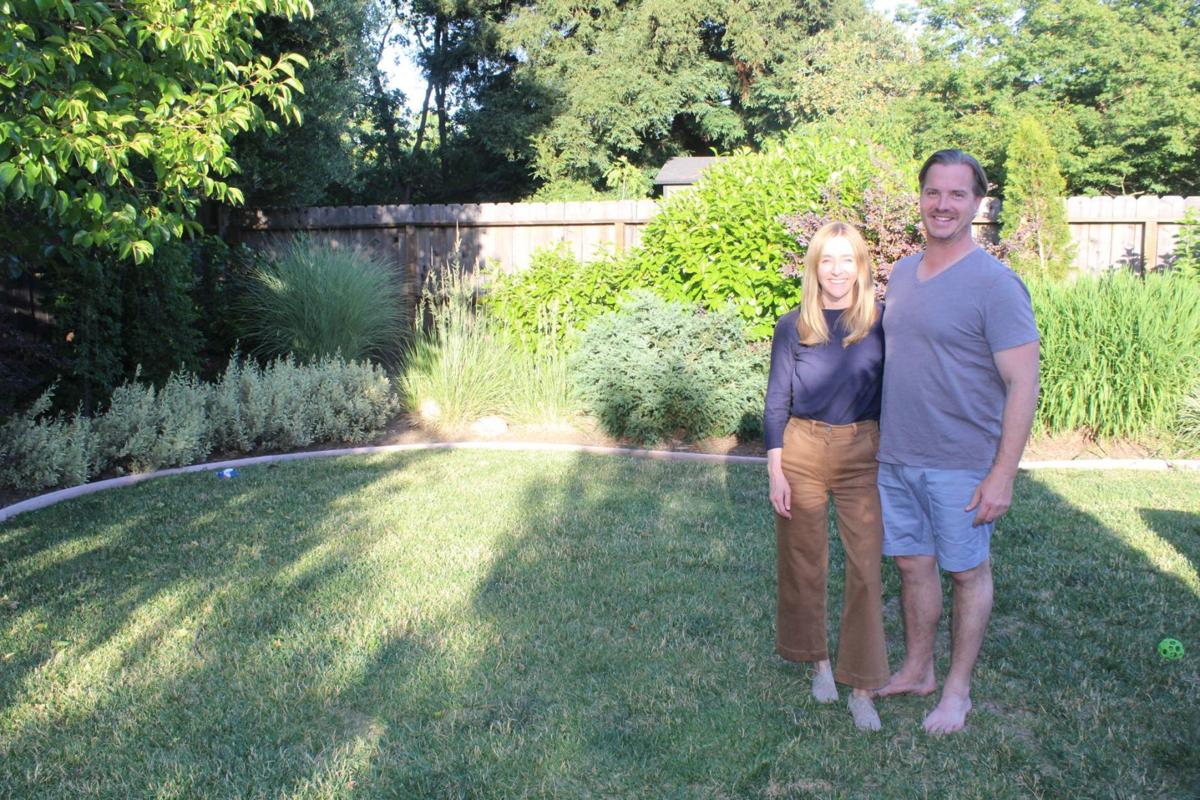 Jessica and Kevin Hague stand in the backyard of their Hudson Avenue home, where PG&E is proposing to build a tower. 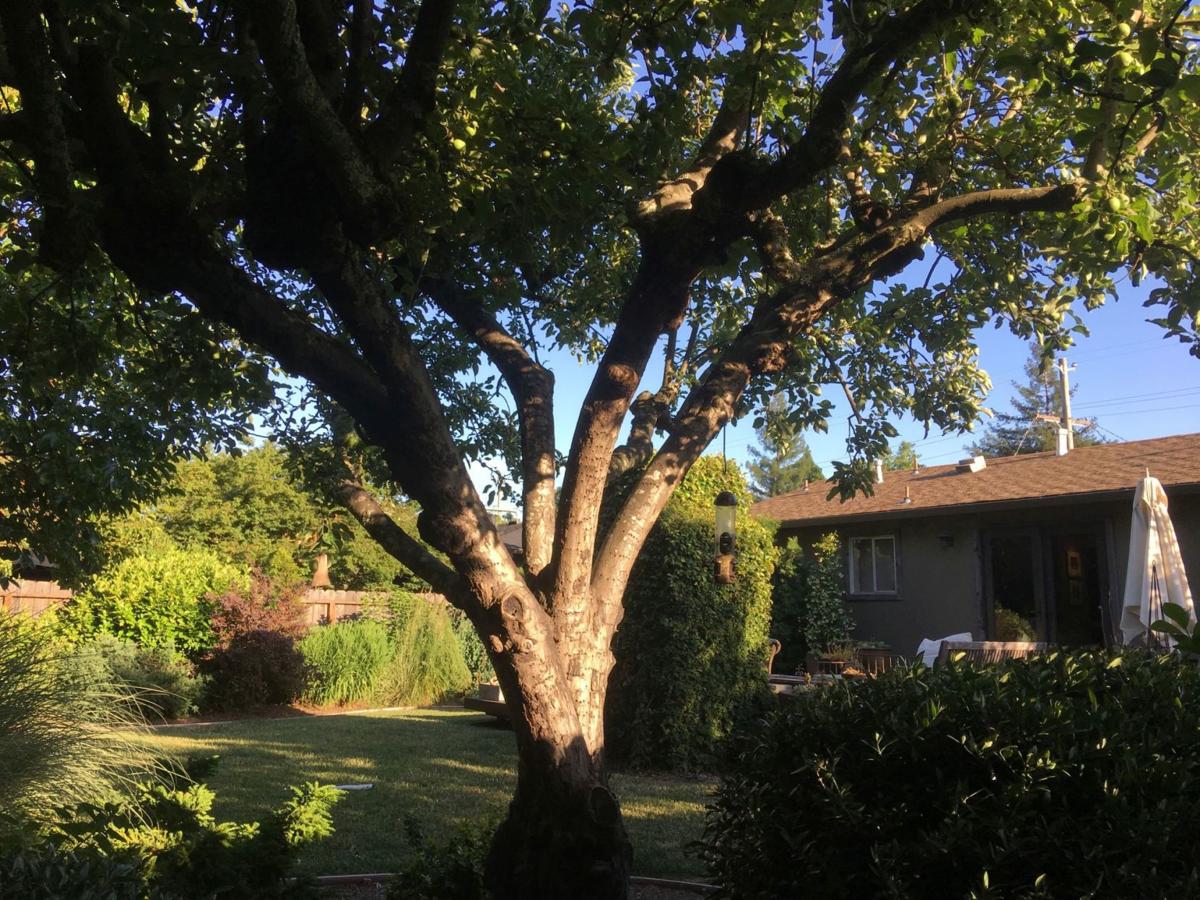 The backyard of Jessica and Kevin Hague's house on Hudson Avenue, where PG&E wants to install a tower.

St. Helena officials are urging regulators to order a stop to PG&E construction in the city after a local couple said they were blindsided by the utility’s plan to install a tower in their backyard.

Jessica and Kevin Hague were unaware of the proposed high-voltage transmission line support tower until a PG&E subcontractor came to their Hudson Avenue home around May 20 and told them about the tower in a subsequent phone call. A PG&E representative confirmed the plan to the Hagues on June 5.

On April 9, PG&E representatives briefed the City Council on plans to remove and replace 13 existing towers along the 60-kilovolt Fulton-Calistoga transmission line, but they didn’t mention any poles or towers in new locations.

The way the Hagues found out about the tower was “wholly inappropriate,” said Jessica Hague.

“This solution is intended to last for two generations – 150 years – and PG&E has taken no time to evaluate it, disclose it, describe it, or provide documentation for it,” Hague said.

As a legal basis for installing the tower, PG&E showed the Hagues an apparently unrecorded easement from 1928 that states no new poles can be installed without the property owner’s agreement.

On Tuesday, the council authorized staff to send a letter asking the California Public Utilities Commission to force PG&E to stop work until it clarifies the details of the project, obtains any necessary permits, and reduces impacts on the city and its property owners.

The city’s letter cites lack of adequate notice, undisclosed environmental and aesthetic impacts, a lack of clear legal authority to install the new tower, and PG&E’s failure to work with the city on possible alternatives such as undergrounding the lines or changing their alignment.

According to the letter, the language of the easement raises “serious concerns” about whether PG&E has the legal right to build the new structure. The letter also asks if PG&E plans to install other poles or towers that haven’t been disclosed.

Councilmember Paul Dohring said he was “extremely disappointed” that PG&E didn’t send anyone to speak at Tuesday’s council meeting. PG&E owes the city and residents an explanation for the lack of notice, inadequate legal documentation, and discrepancies in PG&E’s project description, he said.

“They may need to do this elsewhere and we don’t even know about it yet,” Dohring said.

According to the city’s letter, the project design seems to have changed after PG&E briefed the City Council on April 9. The project’s public comment period closed the next day.

The project is intended to enhance safety, reduce the risk of fire, and bring the line into compliance with state regulations.

The 12-mile-long transmission line only passes over backyards for 800 feet, and the Hagues say it would be safer to underground the line within that short span.

The Hagues were scheduled to meet with PG&E again on Wednesday after the Star’s deadline. The Hagues and their neighbors have built a website, hudsonavenue.org, with information, documents, and links to contact elected officials.

A PG&E spokesperson did not provide comment in time for the Star’s deadline.

CALISTOGA — Terry Gard’s family has owned and farmed property at the corner of Highway 29 and Dunaweal Lane for generations.

More PG&E power blackouts are coming. Here's what you should do to prepare

The era of available electricity whenever and wherever needed is officially over in wildfire-plagued California.

PG&E shuts off power to 1,300 in eastern Napa County

About 1,300 local Pacific Gas & Electric Company customers lost power at 6 a.m. on Saturday to preempt a possible fire hazard during a per…

SAN FRANCISCO — Pacific Gas & Electric Co. has restored power to more than 20,000 customers in Northern California after it shut it off ov…

A Red Flag Warning was issued for portions of Napa County this weekend, with Pacific Gas & Electric saying it might proactively turn off t…

Pacific Gas & Electric will be holding an open house in Napa to take questions and feedback from customers, and discuss wildfire safety an…

City of Napa says PG&E at fault for gas leak

The City of Napa says the Pacific Gas & Electric Company failed to properly mark its gas line, which resulted in a leak when city crews st…

Two weeks after adopting St. Helena’s General Plan, the City Council started talking about how to perfect it.

PG&E has advised the City of Calistoga that the Highway 29 generators will be in operation this week and next week as follows:

Be prepared for power shutdowns

The St. Helena City Council will hold its next regular meeting at 6 p.m. Tuesday, June 25, at Vintage Hall.

The newest team member at City Hall has a background in transportation and economic development, a keen interest in local government, and aspi…

After a St. Helena couple was startled to hear that PG&E planned to install a pole in their backyard, the utility says it’s still deciding…

After a St. Helena couple was startled to hear that PG&E planned to install a pole in their backyard, the utility says it’s still deciding…

PG&E has been forced to halt construction after St. Helena residents and city officials say the utility failed to disclose the full impact…

PG&E has been forced to halt construction after St. Helena residents and city officials say the utility failed to disclose the full impact…

PG&E has decided not to build a new pole in the backyard of a Hudson Avenue home, to the relief of homeowners who said they were not notif…

PG&E has decided not to build a new pole in the backyard of a Hudson Avenue home, to the relief of St. Helena homeowners who said they wer…

Jessica and Kevin Hague stand in the backyard of their Hudson Avenue home, where PG&E is proposing to build a tower.

The backyard of Jessica and Kevin Hague's house on Hudson Avenue, where PG&E wants to install a tower.