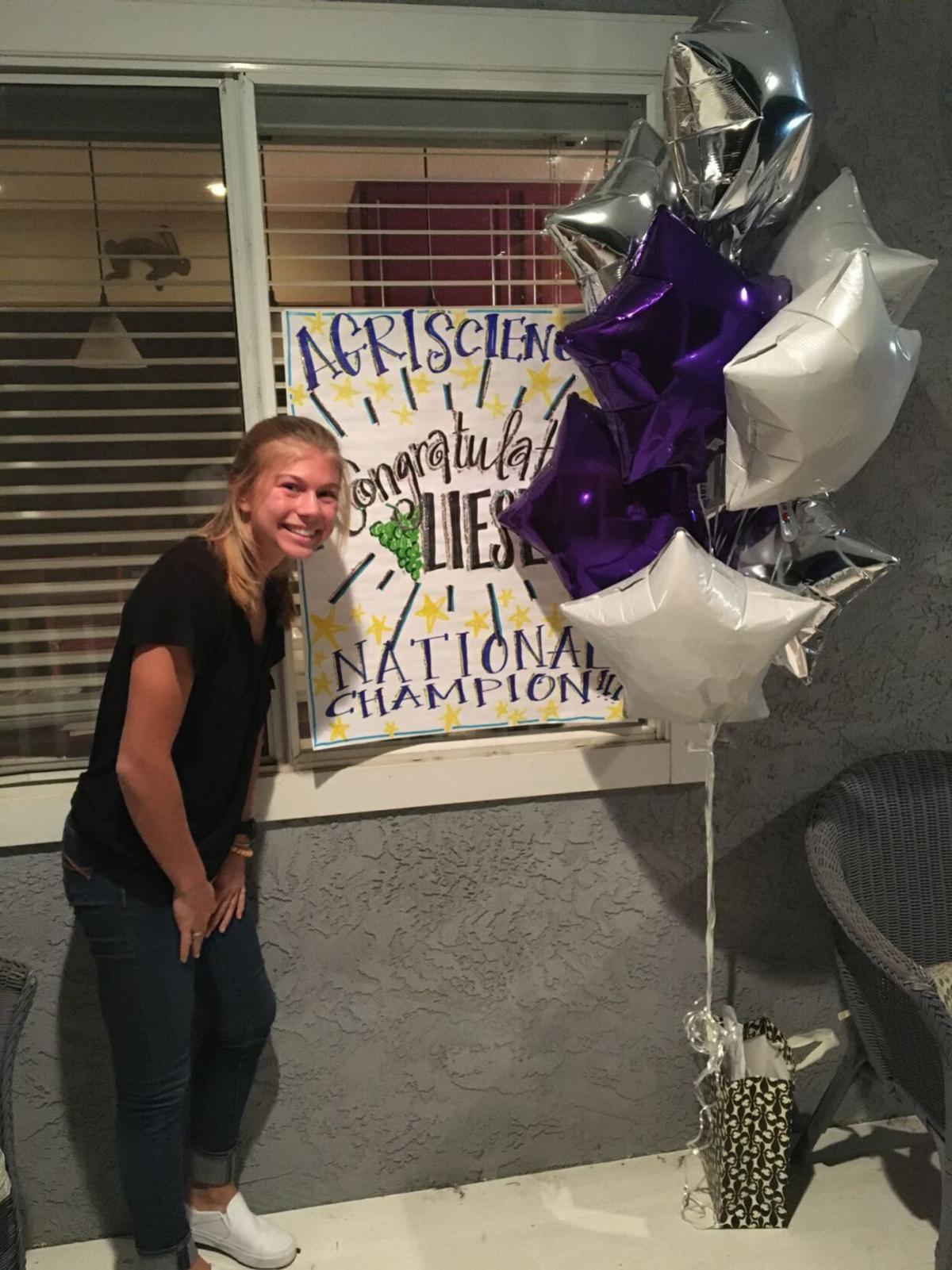 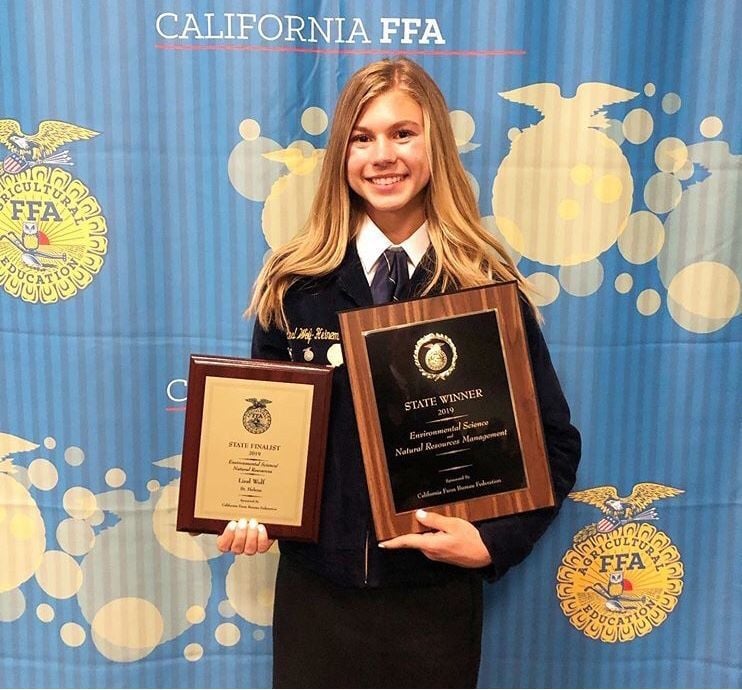 Liesl Wolf Heinemann in 2019, after winning a state championship for her FFA project. She went one step further this year, winning the national championship. 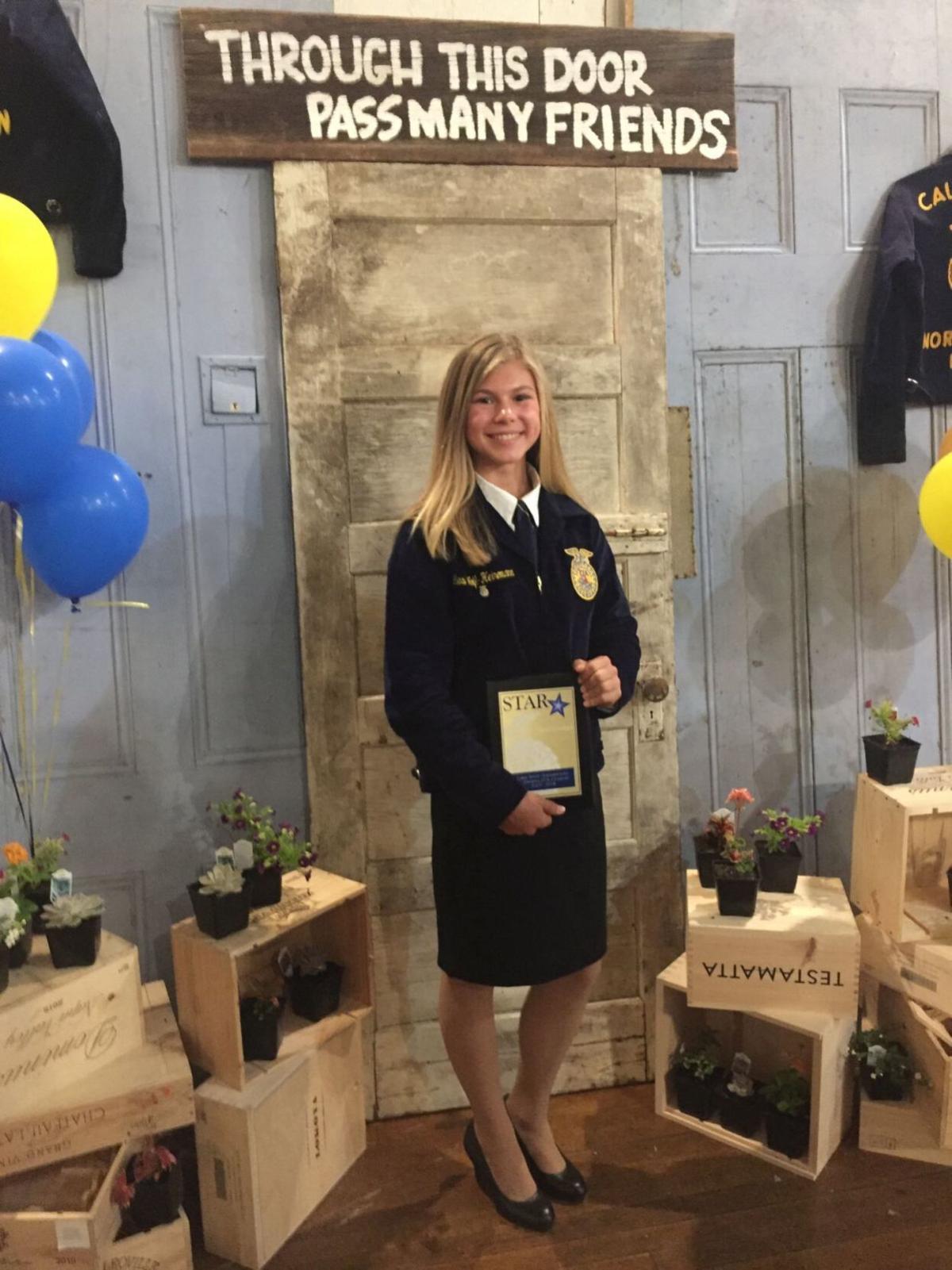 Liesl Wolf Heinemann, president of St. Helena FFA, won a national award from the organization for her research project on consumers' detection of mildew in wine.

Liesl Wolf Heinemann can tell you everything you need to know about the smell of mildew in wine. Never mind that she isn’t even old enough to drink it yet.

Wolf Heinemann, president of St. Helena FFA and a senior at St. Helena High School, performed a research project that won the national championship for her division in the Food Products and Processing Systems category on Oct. 27 at the National FFA Agriscience Fair, held virtually this year.

“I put a lot of work into this project, so seeing it pay off is really rewarding,” she said.

As part of her Advanced Ag Systems class, Wolf Heinemann researched important contemporary topics in viticulture and decided to study how much mold or mildew consumers can tolerate in wine.

Before the pandemic, Wolf Heinemann invited 30 members of the community to St. Helena High School, where they sniffed wines that were tainted with varying levels of mildew. School rules prohibited tasting, so participants could only use their noses.

The answer, she found: 50% of participants were able to detect a difference when the mildew threshold was at 15%.

She collaborated with researchers at Fresno State University and honed her paper at regional FFA field days. When she submitted it to the state competition, it placed first in her division.

From there, a national committee judged whether it deserved bronze, silver, gold or — for the most exceptional papers — a shot at the national championship. A paper Wolf Heinemann wrote last year got a gold ranking. This time, the judges placed her viticulture paper one notch higher than that, putting her one step away from a national championship.

Then she was notified by email that her paper was one of the top three in the country.

“That’s when the excitement really hit,” she said.

At this point Wolf Heinemann ordinarily would have presented her paper at the National FFA Convention in Indianapolis. Due to the pandemic, she joined the conference via Zoom and found out she’d won first place.

Word got around quickly. While she was away, her ag teachers left balloons and other decorations on her house.

“They’re really great people who’ve been super-supportive through this whole process,” she said. “They’d do this for anyone in the chapter because they know how hard we all work.”

Judy Aschwanden, Wolf Heinemann’s Advanced Ag Systems teacher, said the paper probably stood out to judges because it deals with a topic that’s currently of great interest in the field of viticulture and because it piggybacked on similar research conducted at Fresno State.

“The information gathered in her study can be useful in industry at this time. It’s very pertinent,” Aschwanden said.

Wolf Heinemann is in the middle of the college application process and plans to study wine and viticulture.

Rebuilding a dream on the mountain: Behrens Family Winery and the Glass Fire

Lisa Drinkward and Les Behrens lost a winery in the Glass Fire, but are still optimistic about their business.

Dan Berger On Wine: A decade of disaster

In a year when more than 200,000 Americans died because of a rampant virus; and when normal life nationally was shattered by wide-ranging weather catastrophes, a bad vintage in wine country might seem trivial.

Allison Levine Please The Palate:The next generation of family-owned wineries

Meet four women from Argentina, France and Italy who are carrying on their famiilies' legacies in wine.

Harvest is reaching its climax and could be mostly over in two or three weeks.

St. Helena school administrators glad to have kids back in class

Administrators say it was the right call to resume in-person instruction on Nov. 2.

Columnist Audrey Ward on regarding young ones with the esteem and wonder they so deserve.

Regarding Children: My girl

Columnist Audrey Ward asks that we respect young women’s bodies and help them do the same.

Liesl Wolf Heinemann in 2019, after winning a state championship for her FFA project. She went one step further this year, winning the national championship.

Liesl Wolf Heinemann, president of St. Helena FFA, won a national award from the organization for her research project on consumers' detection of mildew in wine.