And until the last moments of the auction, Arvid’s painting was shaping up to be its biggest financial disappointment too.

The 23-inch-by-41-inch artwork blends printed newspaper articles about the historic tasting with an oil painting of the winning bottle, a glass of wine and a corkscrew. Auctioneer Devon Bell started the bidding at $25,000 – well below the painting’s gallery price of $42,000 – but there seemed to be no takers.

Bell said Arvid’s painting would instead be sold on the open market, with the proceeds benefiting the historical society in its quest to establish a physical home in St. Helena. The artist’s wife, Vanessa Arvid, attending the event on her husband’s behalf, said he would also create limited editions of the painting, with a portion of the proceeds going to the historical society.

As one last round of applause seemed to bring the auction to an anti-climactic end, Napa Valley resident Peter Campbell raised his paddle to bid $25,000 – the highest bid of the night by far. There were some whoops of excitement, followed by a collective sigh of disappointment when auctioneer Devon Bell announced that $25,000 was below the painting’s reserve price.

That was when Vanessa Arvid played her trump card. As Campbell was considering whether to raise his own bid, Arvid rushed to Bell’s side and offered to throw in a bottle of 2015 Stag’s Leap SLV Cabernet Sauvignon.

Arvid said the Stag’s Leap painting presented a unique challenge for her husband because the only bottle of that vintage that could have served as a model is at the Smithsonian in Washington, D.C. The winery did provide Arvid with some labels, as well as the bottle that sealed the deal at Saturday’s auction.

Arvid’s Stag’s Leap painting was the top-grossing among the 39 art, wine and vacation lots that were auctioned off during Saturday’s live auction. Arvid also created the top-grossing lot last year, when one of his paintings sold for $8,500.

The concept of “History Becomes Art,” now in its third year, was dreamed up by Arvid and Susanne Salvestrin, then-chair of the St. Helena Historical Society, during one of his stays at Salvestrin’s bed-and-breakfast. Artists would choose a photo from the society’s collection, use it as inspiration for a work of art, and allow the art to be auctioned off at a fundraiser.

The format is especially appealing for local artists like St. Helena’s Marvin Humphrey, who submitted two paintings this year. One was based on a 1920s-era photo of the entrance to Salvestrin Winery during a rare snowstorm and the other was based on a 1921 photo of two girls standing under the square-arched entryway to Shady Brook Farm in Calistoga.

The Salvestrin painting is a fairly faithful recreation of the photo, with more visible snowflakes. But for the Shady Brook painting, Humphrey made it look like the two girls, painted in color, were standing in front of a black-and-white matte painting of the original photo, surrounded by a color landscape outside the arch.

“I thought it would be kind of novel to treat it as if it was the backdrop for an old Hollywood set back in the ‘20s,” Humphrey said. “So I painted the black-and-white backdrop with the two girls in the foreground.”

June 12, 1883 marked an important epoch in the history of St. Helena, reported the St. Helena Star. “It was the birthday of a new enterprise, …

Many thanks to all of you who supported the St. Helena Historical Society’s 3rd annual “History Becomes Art” fundraiser at Brasswood on March …

Garrett Cosenza, 35, has been named the new winemaker for Pope Valley Winery. For the past year, he had been an assistant to David Eakle, one … 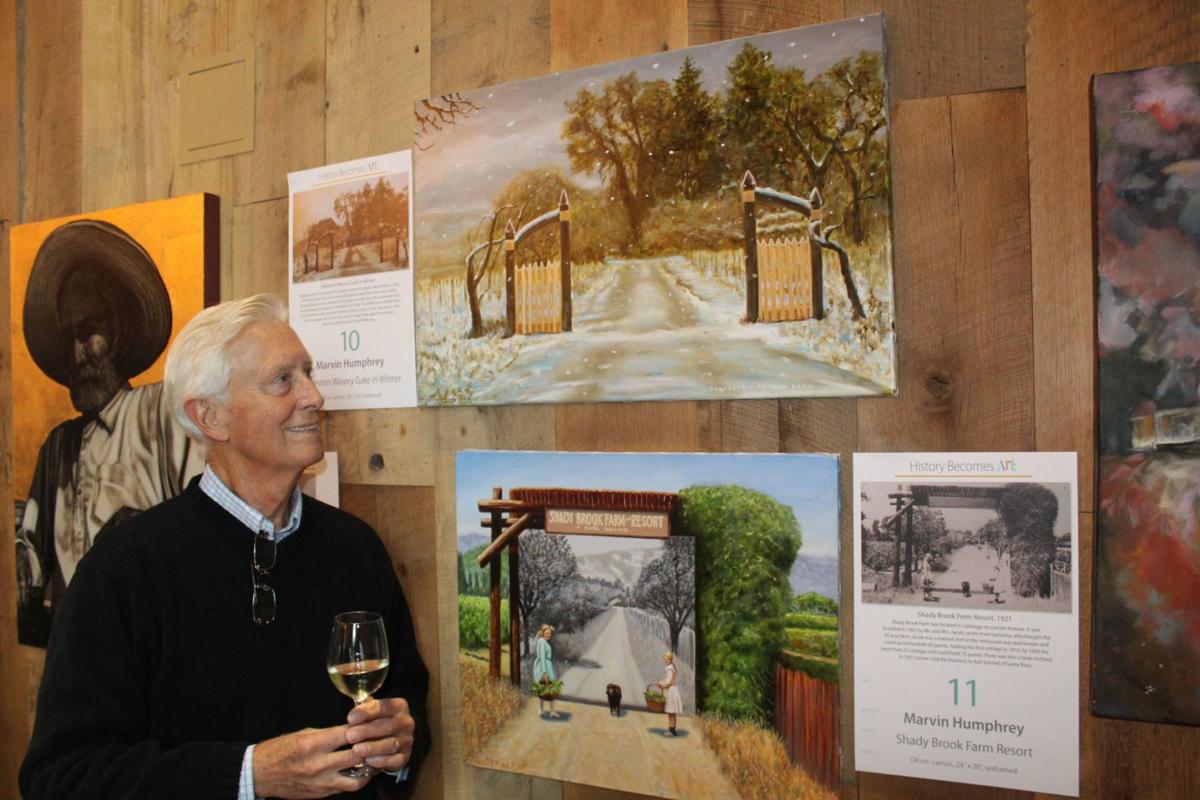 St. Helena artist Marvin Humphrey with the two paintings he contributed to the St. Helena Historical Society's "History Becomes Art" fundraiser. The top one depicts the entrance to what is now Salvestrin Winery. The bottom one is based on a photo of Shady Brook Farm in Calistoga. 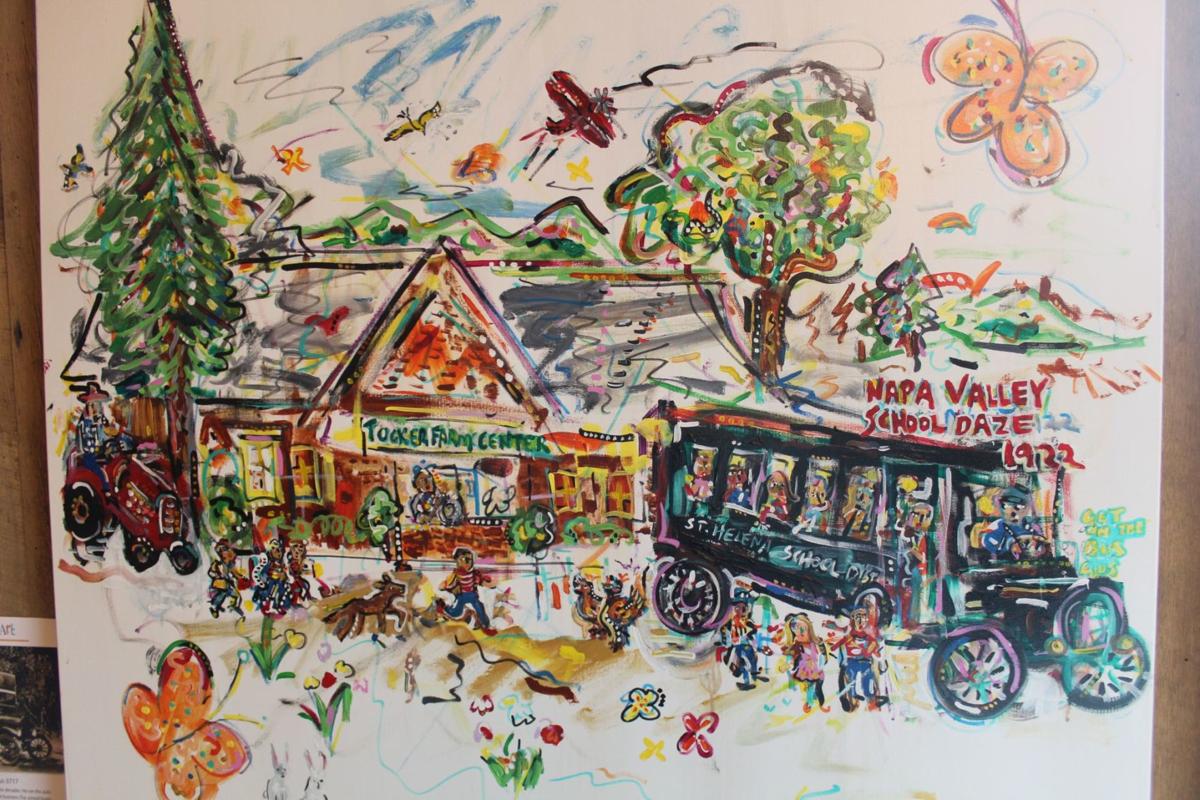 Geoff Ellsworth's painting is based on an old photo of Philo Grant's homemade school bus. Ellsworth's reimagining places the bus in front of the Tucker Farm Center. 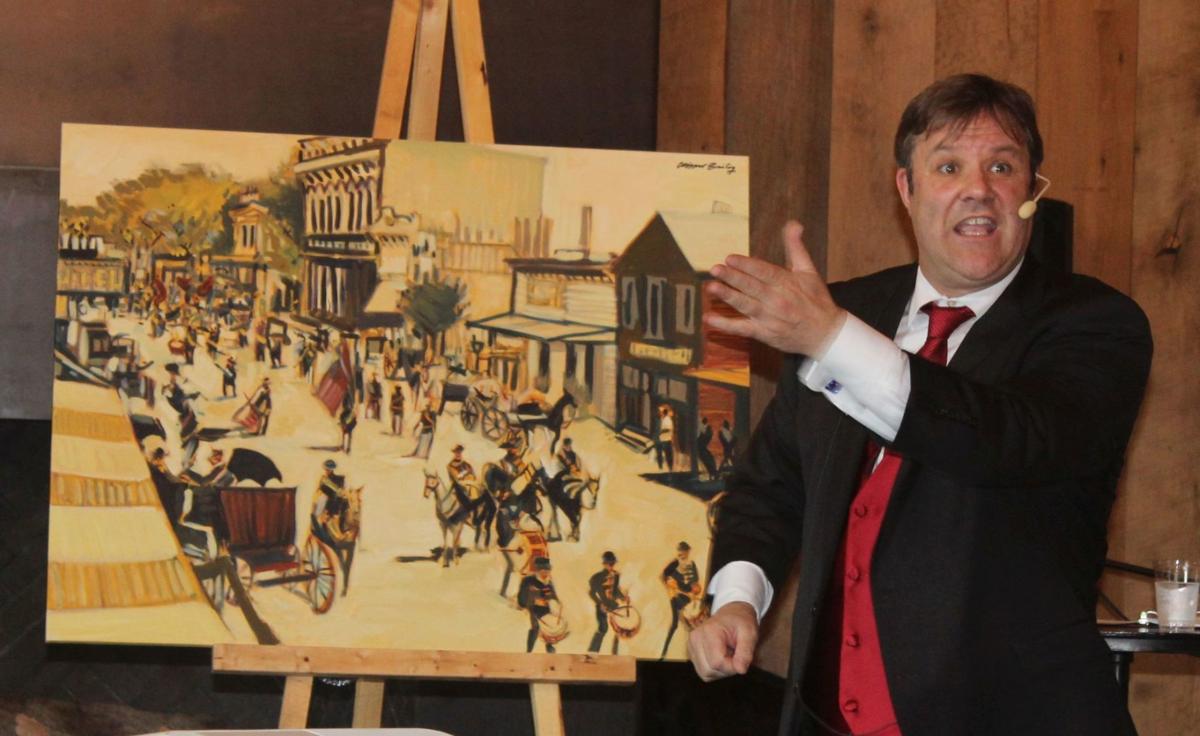 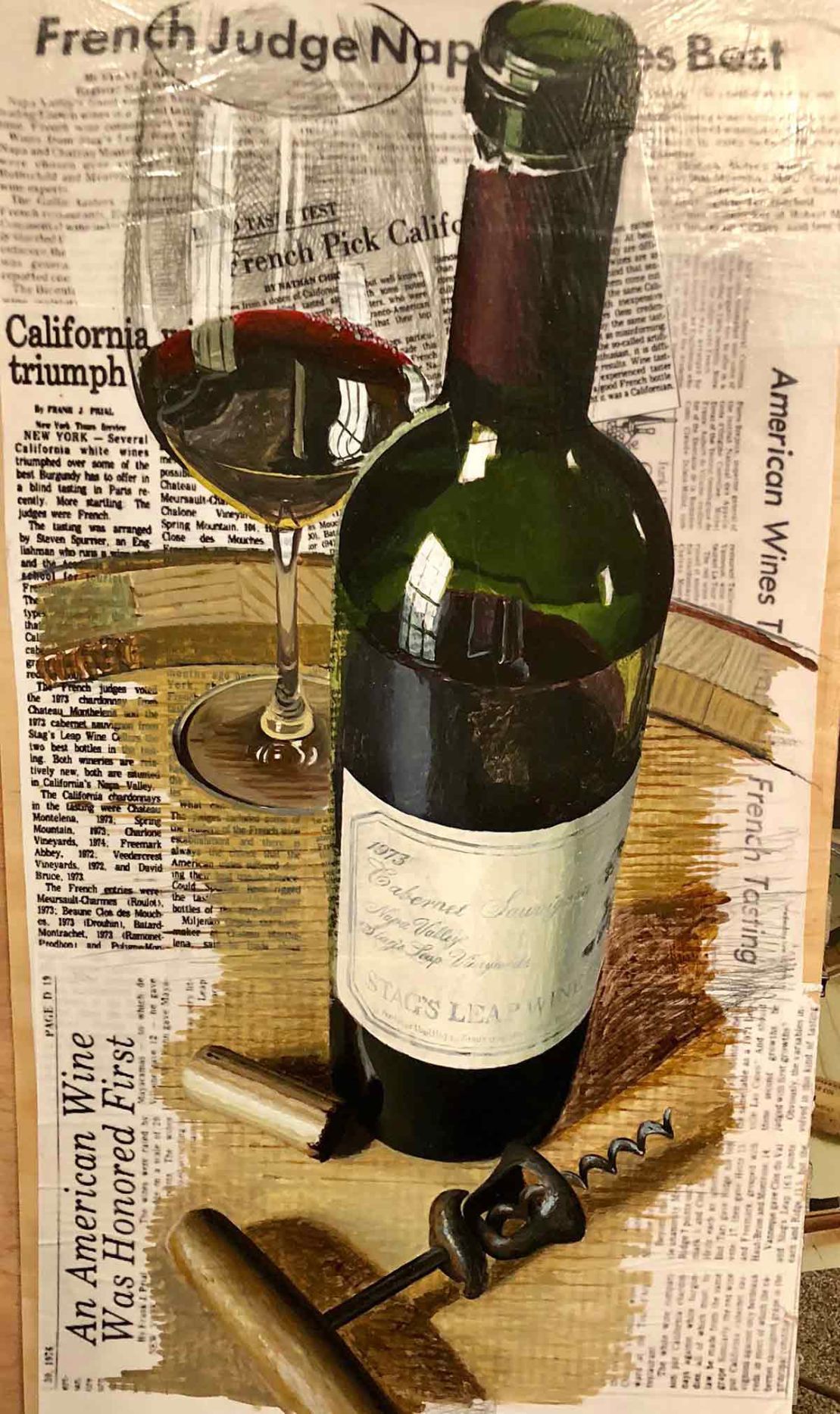 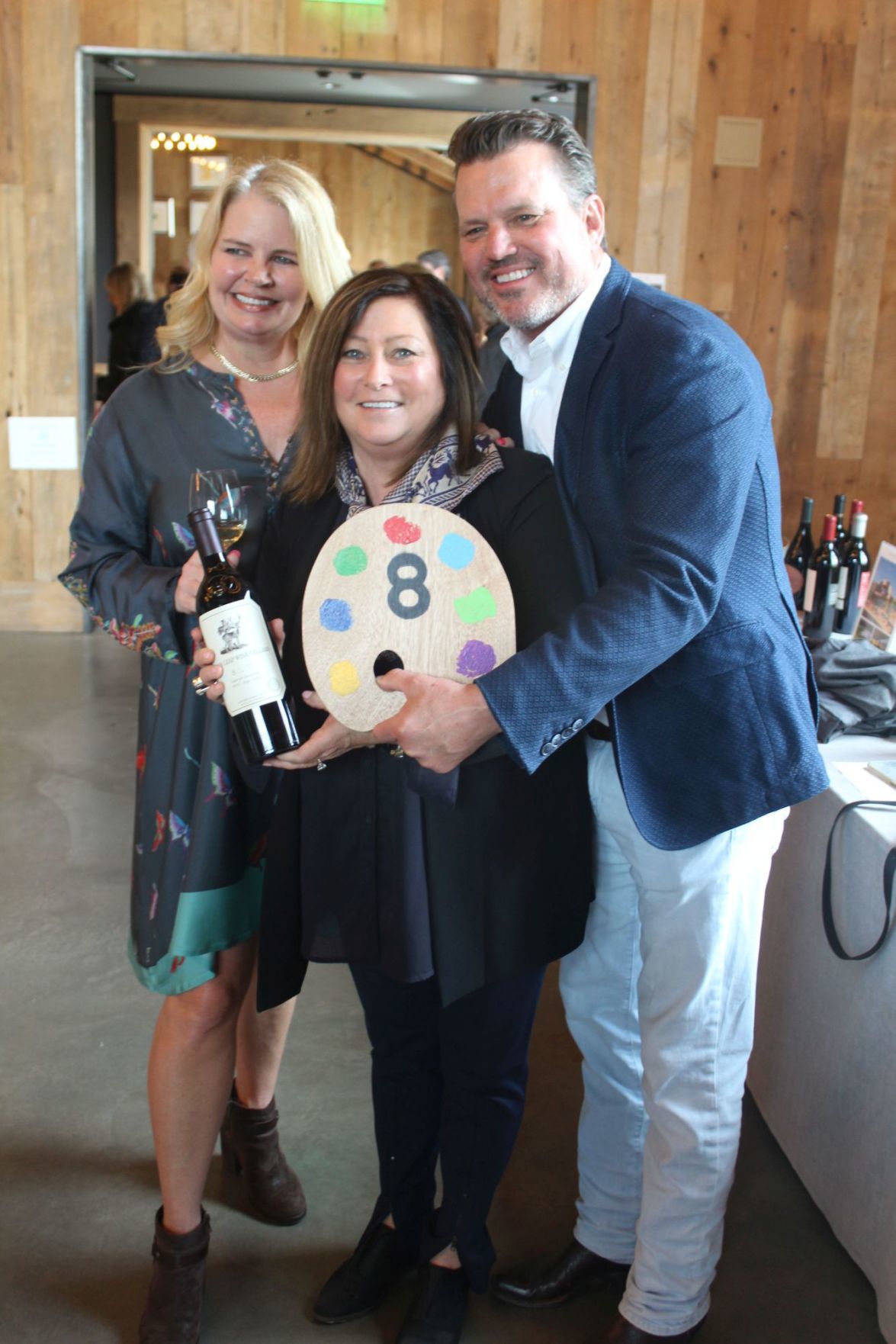 Vanessa Arvid, wife of artist Thomas Arvid, with Lindsay and Peter Campbell, who cast the winning bid of $30,000 for Thomas Arvid's painting of the 1973 Stag's Leap Wine Cellars Cabernet Sauvignon.