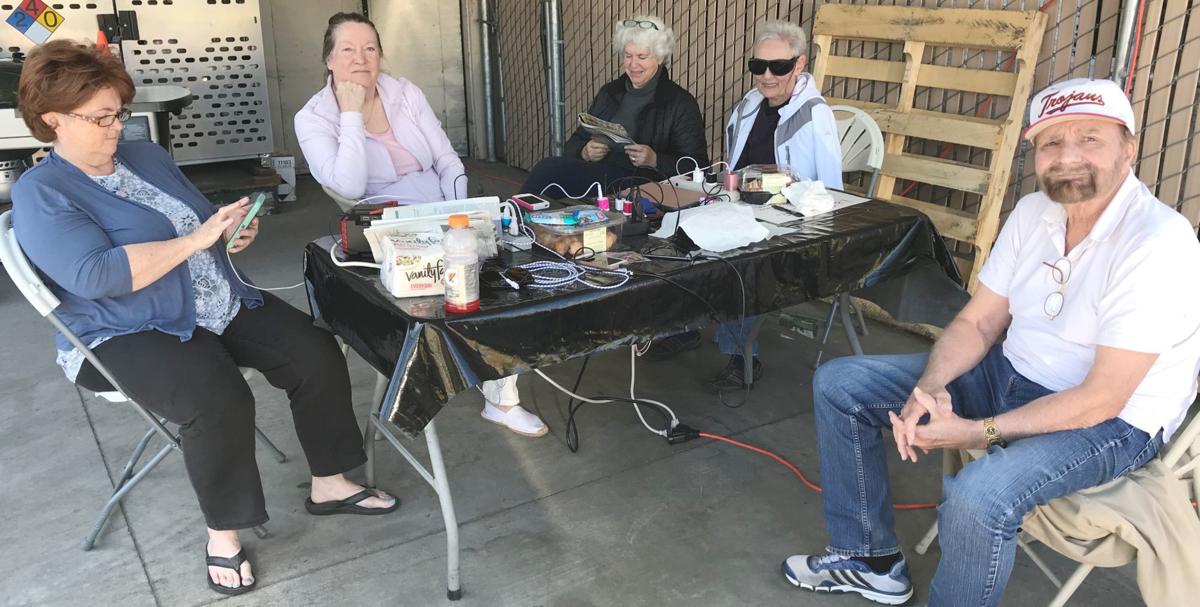 A group of people gathered Thursday morning in the parking lot of Steves Hardware in St. Helena to charge their cellphones and laptops during the power shutdown. 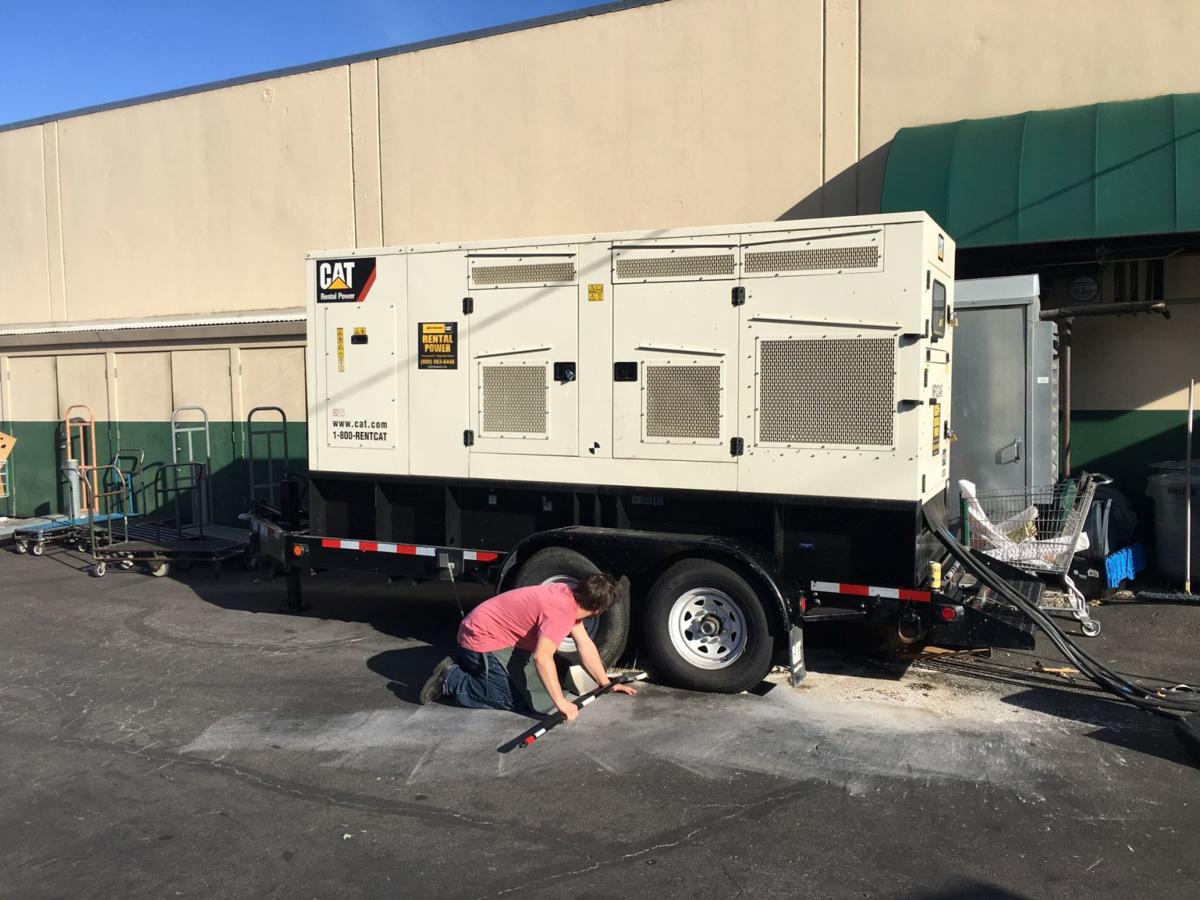 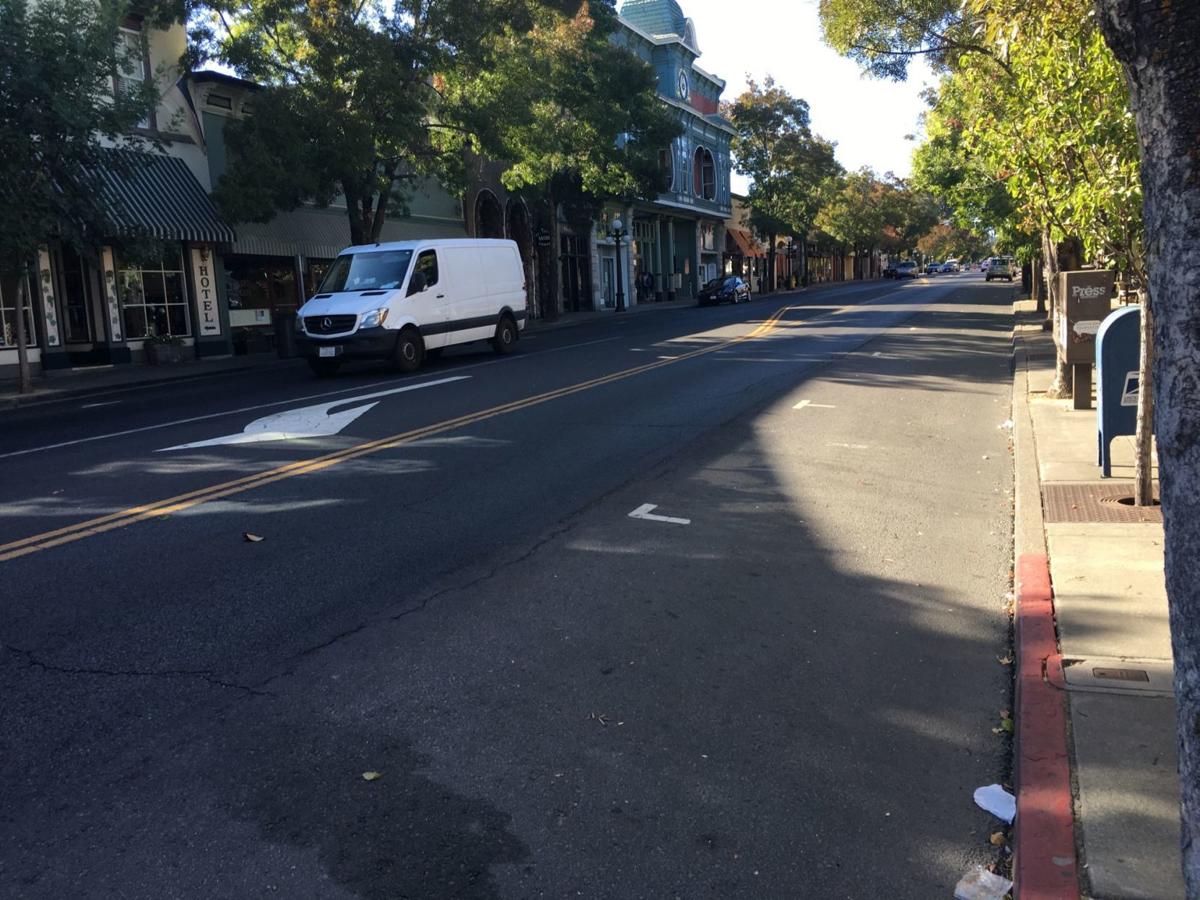 A lone vehicle drives through downtown St. Helena late Wednesday afternoon as most of the shops were closed, because of PG&E's Planned Safety Power Shutoff. 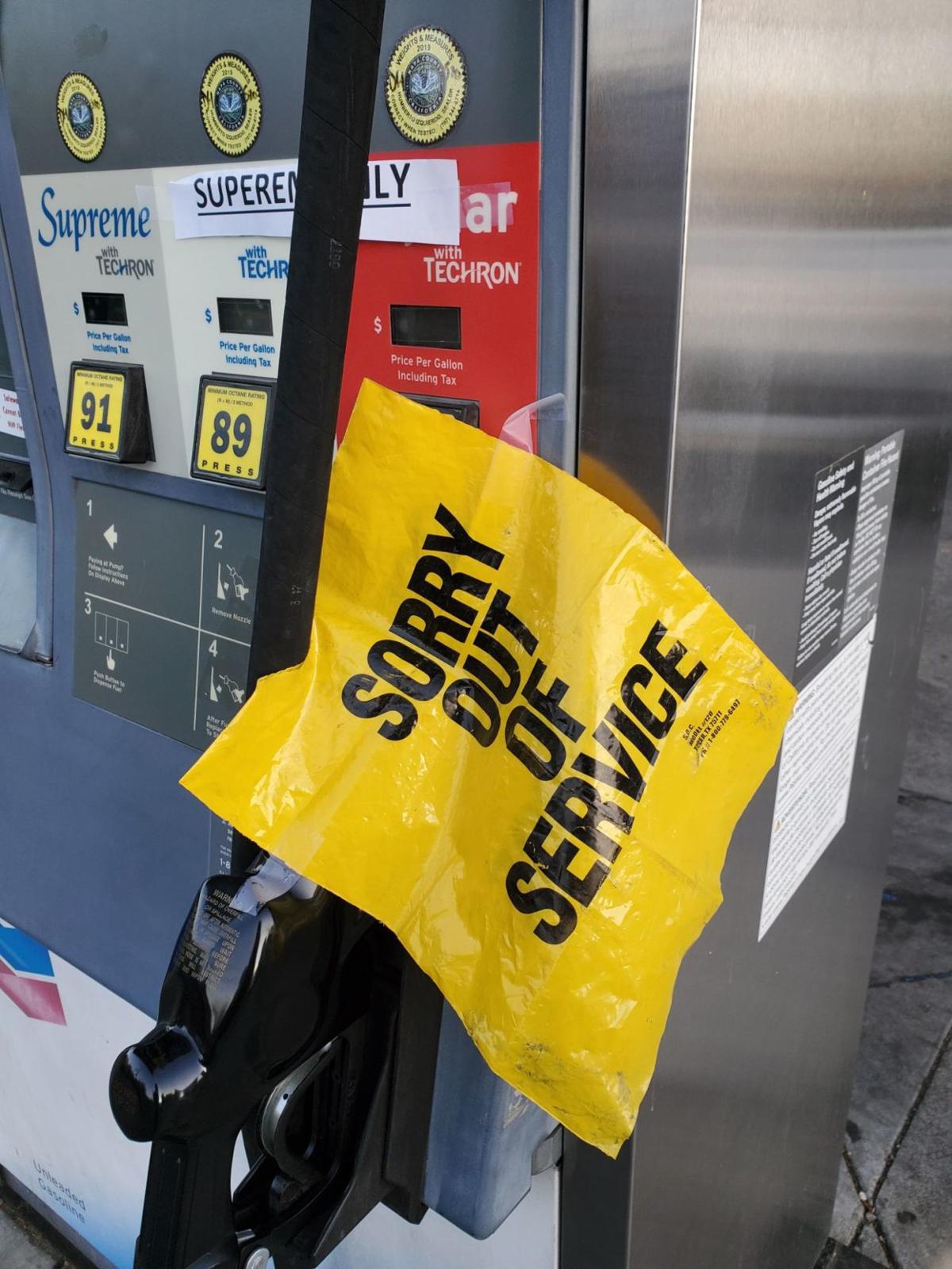 St. Helena's Chevron station was temporarily out of service on Wednesday morning, because there was no power throughout St. Helena, including in the downtown.

A group of people gathered Thursday morning in the parking lot of Steves Hardware in St. Helena to charge their cellphones and laptops during the power shutdown.

A lone vehicle drives through downtown St. Helena late Wednesday afternoon as most of the shops were closed, because of PG&E's Planned Safety Power Shutoff.

St. Helena's Chevron station was temporarily out of service on Wednesday morning, because there was no power throughout St. Helena, including in the downtown.

On Wednesday morning, word quickly spread about where to get hot coffee (Sunshine Foods and the Farmstead café were popular options) and charge cell phones (Steves Hardware, City Hall, the library) during PG&E’s most extensive Public Safety Power Shutoff (PSPS) to date.

St. Helena residents Sloan and Priscilla Upton had invested in a generator that kicked in when the power went out. When they got up Wednesday morning and realized how loud it was, they felt a bit guilty, so they invited their neighbors over to charge their phones, cool off and hang out.

“It seems like the town did really great,” Priscilla Upton said. “(The Model Bakery) was open, people were plugging in at the hardware store. Everybody seemed to be in good shape.”

Upton said she’s glad they invested in a generator.

“Gosh knows how many more times we’re going to have to go through this,” she said.

A massive rented generator kept Sunshine Foods in business, although the loss of Internet service prevented the store from processing credit and debit cards.

“When you have the lights out, nothing feels normal to people. Everything feels all messed up,” said owner Jay Smith. “If we can keep the lights on in here and keep the refrigeration on and have some smiling and friendly faces and hot coffee, it makes people feel almost normal for a little while.”

The outage came less than a week after Gary’s Wine & Marketplace opened in the old Dean & DeLuca space. With the help of a small generator, the store was able to serve hot coffee during the outage.

“We couldn’t process credit cards, so we gave away a lot of coffee,” said proprietor Gary Fisch.

As many as 30 people at a time met behind the generator-powered Steves Hardware to charge their phones and laptops and swap stories. Inside the store, generators were selling so fast — 20 from Tuesday through Thursday — that the staff was directing some customers to Parriott Motors, which sells Honda generators.

“Besides a little bit of frustration from not having power, a lot of the people outside were positive and in good spirits,” said Courtney Menegon of Steves. “Inside we were just trying to keep up with the demand (for generators).”

Charles Krug was among the wineries that stayed open during the outage, hosting nearly 100 customers on Oct. 9. Staff placed handmade signs along Highway 29, chilled wine in coolers, and offered tastings outside on the lawn where there was plenty of light.

“They didn’t have electricity in 1861 when Charles Krug first made wine here, did they?” Jim Morris, vice president of estate management and guest relations, said in a statement. “So many visitors to Napa Valley save for and plan their trip for months; we will make sure they get to enjoy some wine, hospitality and hopefully a memorable experience at Charles Krug, even if we are in the dark.”

The St. Helena Public Library, which stayed open but didn’t have power, served around 200 people on both Wednesday and Thursday. That’s fewer than usual, but the solar-powered charging station outside the building was “constantly busy,” said Library Director Chris Kreiden.

Without power in their own homes, library patrons resorted to books. “I don’t think I have ever seen so few DVDs leave the building,” Kreiden said.

St. Helena’s police and fire departments called in extra staff in case of any fires or other emergencies. Mayor Geoff Ellsworth said the city will create an after-incident report to study what went well and where there’s room for improvement.

“In the meantime I will say on the good side that the community remained generally calm through the event, which is always good in such situations and the numerous charging stations and businesses remaining open allowed some normalcy throughout the event,” Ellsworth said.

Electronic communication “continues to be an issue that needs to be improved during any emergency,” Ellsworth said.

“We share with many cities, as well as the California Governor, continuing concern and frustration with PG&E’s approach and follow through on these types of events,” Ellsworth said. “Our dialogue with PG&E will be ongoing, as well as our efforts in ensuring redundant/backup power for future events of this nature.”

State Senator Bill Dodd urged the Public Utilities Commission to hold PG&E accountable for what he called a “poorly handled power shutoff, which caused unnecessary suffering and inconvenience to hundreds of thousands of Californians.”

“It was severely bungled on the part of PG&E, and it can’t be allowed to happen again,” Dodd said in a statement. “While public safety power shutoffs have a role to play, they cannot be executed in a cavalier or haphazard manner.”

A dozen St. Helena downtown stores were open Wednesday during the first day of the PSPS.

A sign outside Ana’s Cantina stated, “Open. No Power, No Problem. Cash Only.” Late afternoon on Wednesday, six people were at the bar, while two others sat at a table near the door.

Down the street, Kokopelli Gallery was open with signs in front proclaiming 50% to 75% store closing sale, the same signs that have been in use for months.

Although Model Bakery was open early on Wednesday, by late afternoon, it had closed, with a sign saying it would open on Friday.

Not much traffic was traveling on Main Street and there were few people walking in the downtown, although one couple was spotted window shopping.

Jeannie Kerr, operations manager for the St. Helena Chamber of Commerce, said she was making sure that guests are welcome, adding the downtown storefront was busy, in part because of its public restrooms. “I’ve been able to talk to them and everyone is in a good mood,” Kerr said. “It’s been a good day, a beautiful day outside, not like the last time power was out downtown, with fire and smoke in the air.”

She said many of those who stopped by wanted to know the restaurants that were open – Farmstead at Long Meadow Ranch, Gott’s Café, Brasswood and the Pizzeria at Tra Vigne, which was selling from its food truck.

Sunshine Foods, Steves Hardware and Brown’s Auto Parts were all using generators to open their doors. Looking up and down Main Street, Liz Macias at Brown’s Auto Parts commented, “It’s pretty damn empty downtown,” adding there are not many tourists to be seen. “It looks like it’s after 6 p.m. and the stores are shut,” she said.

Brown’s, though, was busy, selling batteries, oils, spark plugs and other parts. “Everyone wants to get their generators going, even if they haven’t touched them in 20 years,” she said.

Woodhouse Chocolate, with its pumpkins and ghouls in the front display window was open as was New West Knife Works and Lolo’s Consignment, whose clerk was wearing a headlamp as she pulled the clothing racks from the sidewalk into the darkened store.

Chris Patrick, co-owner of Sportago with Ahren Trumble, was open for business, adding the sporting goods shop is “always open, along with Ana’s Cantina and Steves Hardware, even during the fires.” She said they got a lot of notice of the power going out, so they could prepare for it, including making sure they could take credit cards for sales with a Bank of America app on their cellphone. She said the staff was also writing up receipts. “It’s been a decent day, we like being open for the community,” she said. Patrick has owned Sportago in St. Helena for the past 36 years.

Rob Nelson, store manager at St. Helena Cyclery, had two clothing racks of sale goods on the sidewalk, left over from the sidewalk sale that happened the first weekend of October. “We’ve rented three or four bikes and sold a few things,” he said, for cash. “It’s nice to be here when people need us,” he said. “We’re a small-town bike shop and we’re dealing with people we know.”

Outside behind the store, service manager Justin Gresh was “cranking on repairs,” Nelson said, adding there’s always work that can be done, even without electricity. “Two years ago, during the fire, the only places open were us and Steves Ace Hardware,” Nelson said.

St. Helena's in the dark

St. Helenans are coping with a PG&E Public Safety Power Shutoff that began early Wednesday morning, with no estimate on when power would b…