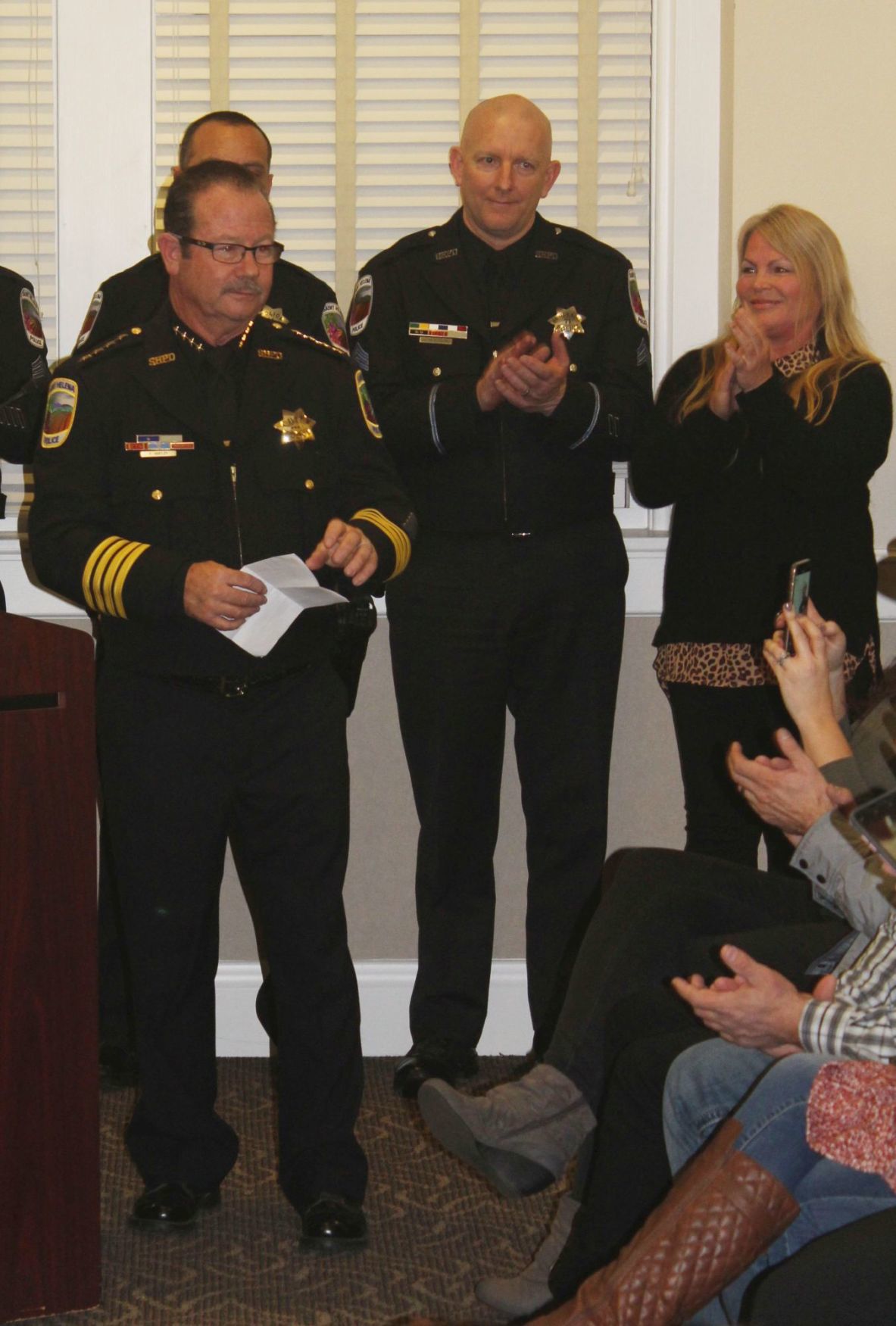 Police Chief Chris Hartley receives a round of applause after taking the oath of office at Tuesday's City Council meeting. 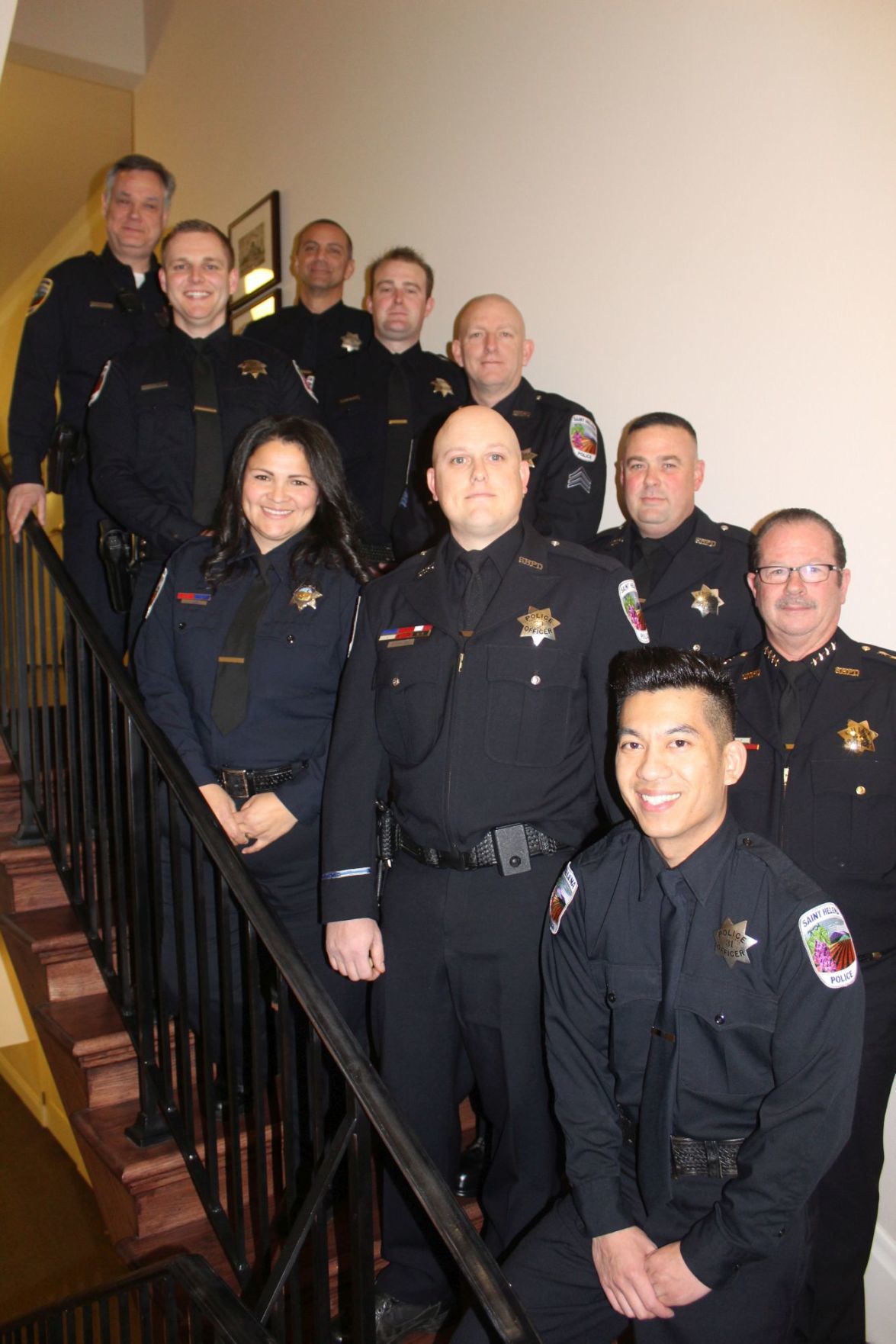 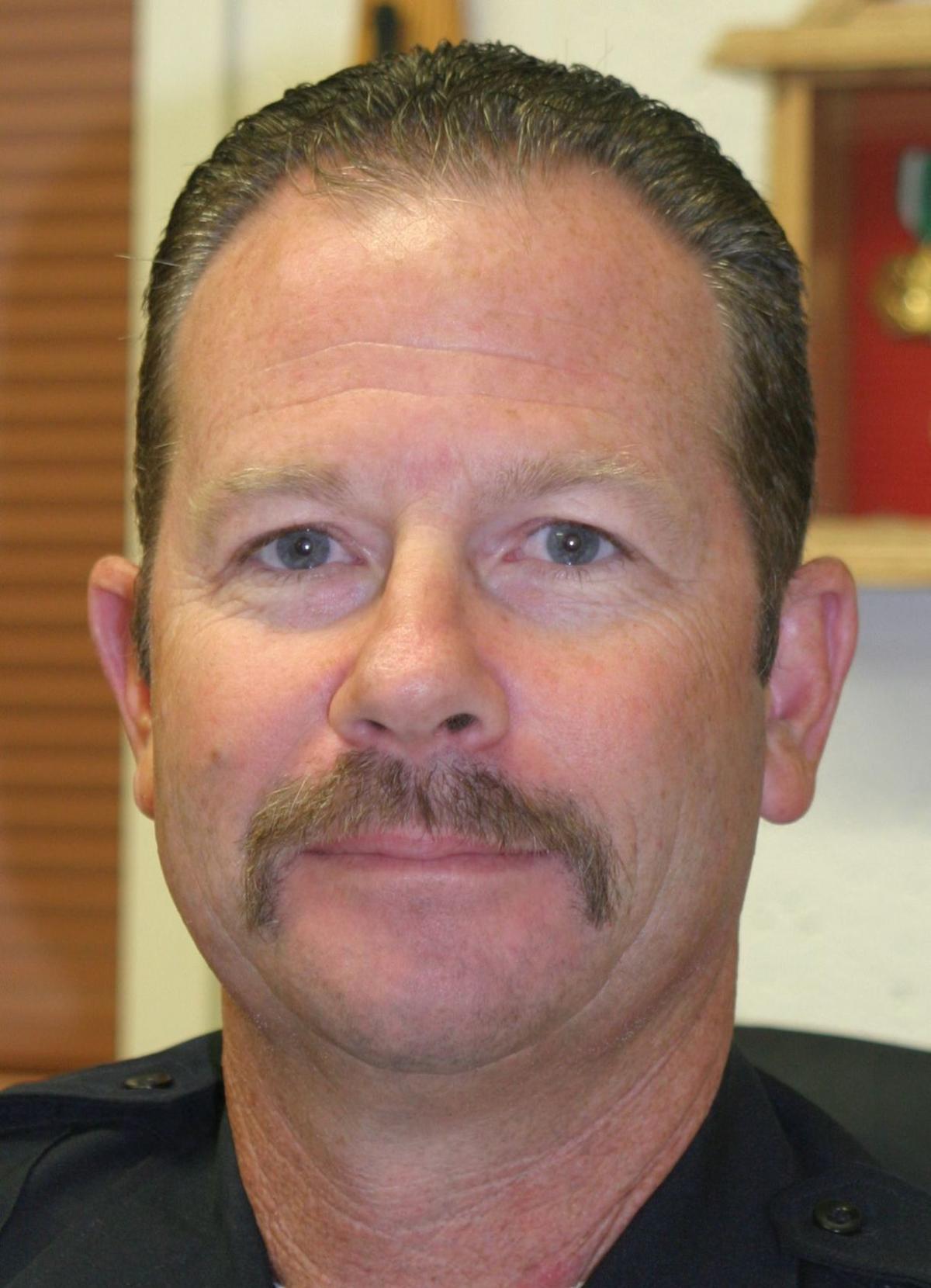 Police Chief Chris Hartley receives a round of applause after taking the oath of office at Tuesday's City Council meeting.

Chris Hartley spent almost 21 years working his way up through the ranks of the St. Helena Police Department, a long climb that culminated Tuesday when former Chief Jackie Rubin pinned the police chief’s badge on his chest.

Last week Hartley briefed the Star on a pair of burglaries and then took a few minutes to look back on his career, share his vision for the department, and explain why a 59-year-old grandfather of eight is still doing a job where people often retire at 50.

“I’m still having fun,” Hartley said. “I love interacting with the public and training and mentoring (officers).”

Hartley’s most memorable experiences include saving the life of a woman who’d tried to commit suicide with a pair of scissors – he drew upon his Marine Corps training to stanch the bleeding – taking a prolific burglar into custody at gunpoint, and collaring a child molester who’d fired a gun at the elementary school.

Shortly after joining the department in 1999, Hartley told the Star he hoped to make sergeant and had always aspired to be Napa County sheriff. He struck a mellower tone last week.

“It came to the point where it’s no longer about me anymore – it’s about these guys out here,” he said, indicating the rest of the department.

Hartley said he’s served under good chiefs and bad chiefs, and he’s learned from all of them. He’s observed how unwelcome outside influences can hurt morale among the rank and file if the chief doesn’t act as a buffer.

“There are times when a resident isn’t happy with City Hall or the garbage company or whatever, and the patrol guys who are responding to these calls are taking the brunt of it,” he said. “But if you have a chief with an open door who actually listens to the community, that stuff can be handled long before patrol gets involved.”

That’s why effective chiefs are “approachable and out there in the community,” Hartley said. He wants to be one those chiefs.

“I’m out there, people know my face,” he said. “I will never not return a call … and I check my emails constantly. It drives my wife crazy.”

He also wants to be a buffer against distractions involving the future of the police station. The outdated and dilapidated building is “falling down around us,” as Hartley put it, but he wants to shield officers from the debate over where the department will move – the Napa Valley College Upper Valley Campus, the Adams Street property, the old CDF building, the Corporation Yard, etc.

Up through the ranks

Hartley spent 20 years in the Marine Corps, retiring as a decorated officer who’d trained and commanded hundreds of troops. He left to become a small-town cop in St. Helena, not far from his hometown of Napa.

Bert Johannsson, police chief at the time, and Dave Curtin, one of Hartley’s training officers, both taught him the importance of community engagement. Hartley said the last few chiefs have done a good job with that, and he wants to do even better.

“My expectation of my people is no more lip service. Get out there and do it,” he said.

He noted that the department has obtained a grant for a school resource officer, sent regular officers to school campuses during lunch, and established “Cup with a Cop” get-togethers at coffee shops (started by officers Melissa Brown and Fil Bianco).

In 2016 Hartley completed a course at the FBI National Academy that trains local law enforcement officials in advanced forensics, investigative techniques and the handling of sensitive personnel matters.

St. Helena’s last two permanent police chiefs, Jackie Rubin and Bill Imboden, had each completed the course before becoming chief. Hartley’s participation was one sign that he was being groomed for a higher post.

Hartley credited Rubin for instituting succession training during her tenure (2012-2015). She sponsored Imboden and Hartley for the FBI training and created the rank of lieutenant, an intermediate level between sergeant and chief that was filled by Imboden and later Hartley.

“This department always runs much smoother when there’s someone internal who’s promoted up,” he said.

The idea of merging the Calistoga and St. Helena police departments came up last year. Hartley said he looks forward to the opportunities and challenges that would come along with a combined department, but “realistically I don’t think Calistoga wants to lose its police department.”

And despite occasional talk of St. Helena contracting with the sheriff’s office, he doesn’t see it happening.

He pointed to cities in Riverside County that eliminated their police departments and contracted with the county sheriff to save money. Things went fine until the contracts got more expensive. Within 10 years, cities were trying to get out of those contracts but couldn’t afford to reestablish their own departments.

St. Helena is also accustomed to a high level of service they probably couldn’t expect from a contract, Hartley said. Recent police logs show officers changing the battery in a woman’s smoke detector and trying to catch an Australian shepherd that’s been eluding capture for months.

“(The sheriff’s office) isn’t going to go to Miss May’s house because she has a skunk on her porch or help someone shut off their water when they have a leak,” Hartley said.

“I look at the PD more as a family more than an organization,” he said. “It’s all about communication. The job’s always got to get done, but people come first.”