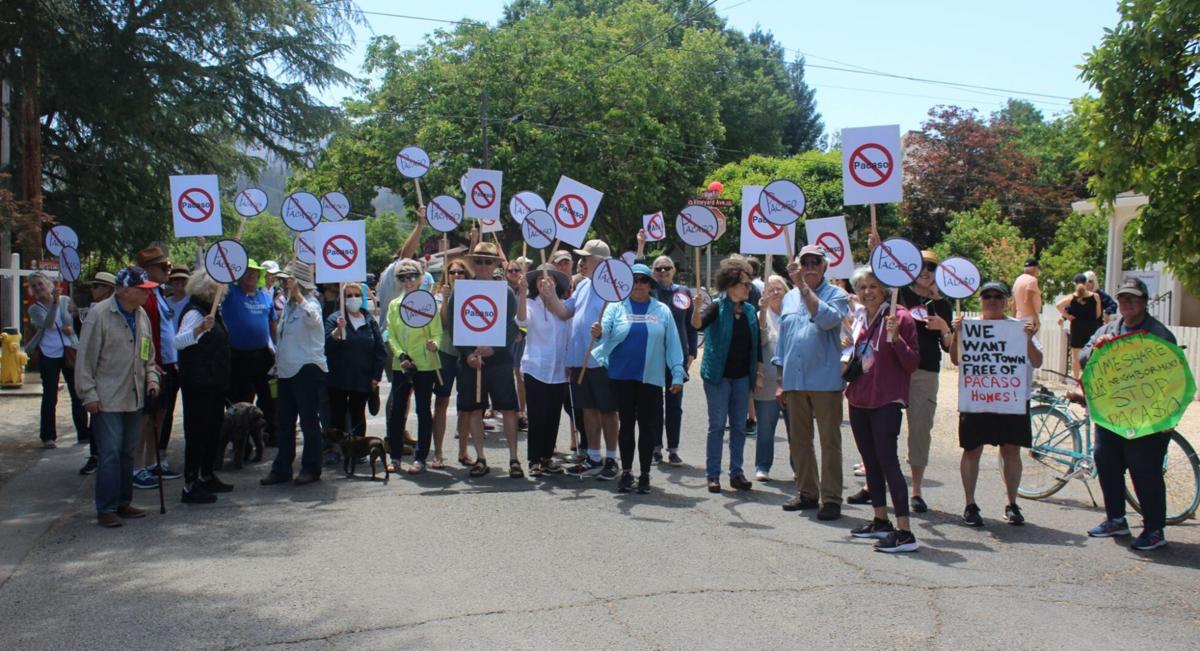 Anti-Pacaso activists gathered for a protest Saturday at the corner of Hillview Place and Vineyard Avenue. 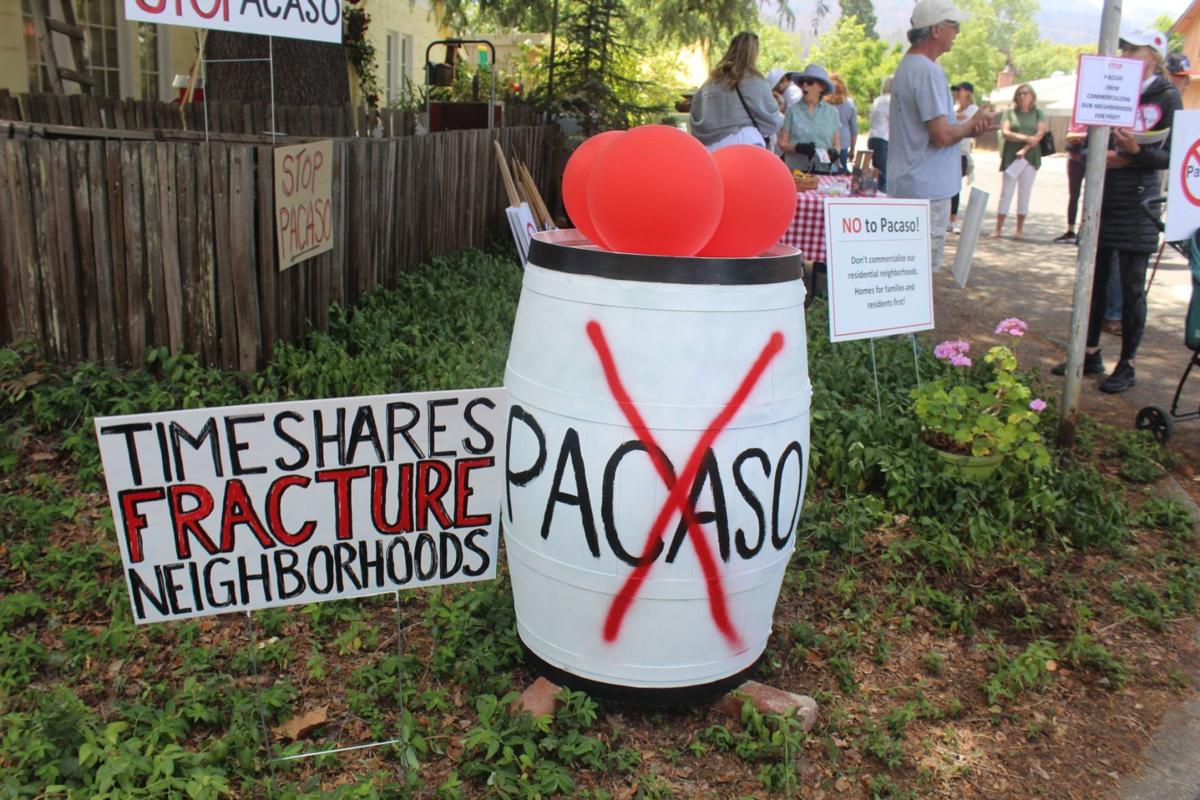 "Timeshares Fracture Neighborhoods" and "Stop Pacaso" were among the signs on display during Saturday's protest. 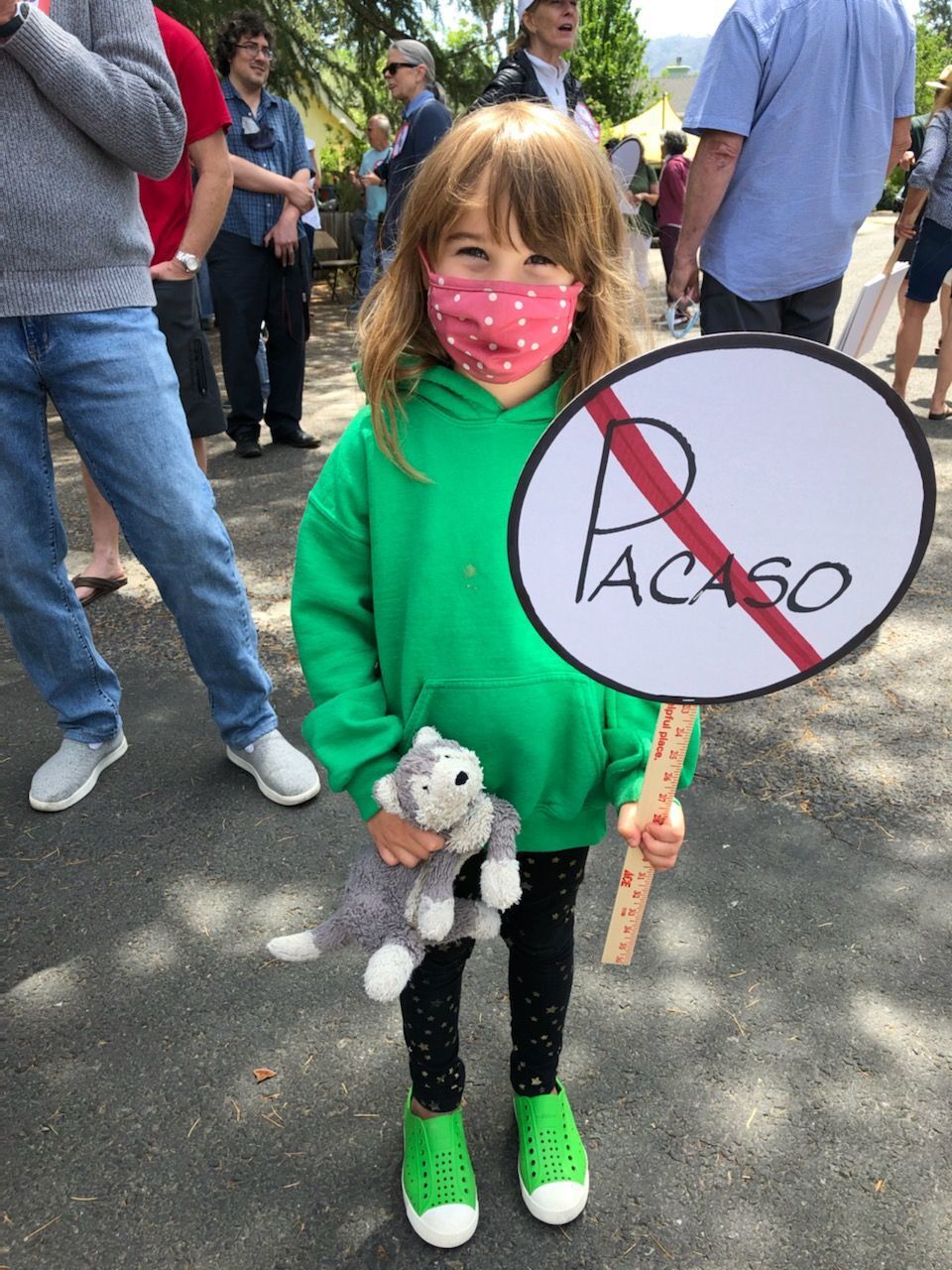 With a $1 billion valuation, the home-sharing startup Pacaso is the business world’s newest unicorn.

But neighbors of Pacaso’s St. Helena houses say they’re the ones getting gored.

Scores of anti-Pacaso residents held a protest Saturday outside a newly built Pacaso house at Hillview Place and Vineyard Avenue. They held signs decrying “timeshares” and warned that a wave of fractionally owned homes could transform St. Helena’s residential neighborhoods.

“This will never be a home,” said Leslie Stanton, who lives near the Hillview house. “Our town is a community, and this is not helping our community at all. … I’d rather have a family there.”

Pacaso sets up a limited liability company (LLC) to hold the title to each home, and then allows up to eight parties to buy a stake in the LLC. Co-owners with a 1/8 share can stay for between 2 and 14 days at a time, for a maximum of 44 nights per year.

Pacaso sued the city in April over officials’ efforts to enforce St. Helena’s ban on timeshares. The company claims its home co-ownership model differs from a timeshare. City officials have declined to comment on the lawsuit other than to say that the City Council directed staff to defend the city against it.

As of Wednesday morning, 1,571 people had signed an online petition to "strongly oppose the incursion of 'time-shares' by any other name into our neighborhoods."

Residents who fear the worst point to a house on Valley View Street that neighbors say has had a reputation as a party house since before Pacaso acquired it.

According to a promotional article on Pacaso’s website, the “exquisite” house’s previous owners held a birthday party for 30 people. The next day, more than 100 people showed up for a house party at what Pacaso calls the “Poolhouse.”

“They’ve had quite a few parties, with speakers blasting, that have gone until 1:30 in the morning,” neighbor Debbie Polverino told the Star recently. “Loud music, parties out by the pool — last weekend it was a birthday party with a bunch of families and kids. That’s what this house is for. It’s not a quiet vacation home.”

After three calls to the police about noise continuing past 10 p.m., Pacaso sent a representative to meet with Polverino and other neighbors of the Valley View house about loud music, drunken revelry, cars parked in front of neighbors’ houses, and other nuisances.

According to Polverino, the Pacaso representative agreed to send someone to measure the speakers’ decibel level and limit their maximum volume.

“After she showed up and talked to us, there was a party the following day,” Polverino said.

“They’re not our neighbors. All they are is a detriment to the neighborhood,” Jim Davis, who also lives near the Valley View home, told the City Council on May 11.

Neighbors of other Pacaso homes on Hillview ($418,000 for 1/8 ownership) and Madrona ($525,000) worry that the same thing will happen to their neighborhoods.

Mari Jansdotter was once a second homeowner herself, but over a year ago she bought a house near RLS Middle School and became a full-time resident. Thanks to a few Pacaso homes that are in the works nearby, “this is already not the neighborhood I bought my house in,” she said.

She has nothing against second homeowners, but she’s worried that if fractional owners can’t spend their allotted time at the house, they’ll either rent it out under the table or let someone else use it. (Pacaso prohibits rentals, but fractional owners may have guests.)

“Then you have commercial visitors in a residential neighborhood,” Jansdotter said. “That’s why we have residential zoning in the first place.”

A Pacaso spokesperson released a statement in response to Saturday’s protest.

“Discriminatory harassment and intimidation are violations of fair housing laws,” the statement said. “Real estate co-ownership is a legal right and common practice throughout the Napa Valley. It is also a powerful tool for lowering barriers for traditionally underrepresented groups to own real estate. In St. Helena, more than half of the active Pacaso owners are families of color or identify as LGBTQ+.”

“Community members have made derogatory comments against Pacaso owners, trespassed on Pacaso properties, and attempted to intimidate buyers. The image of exclusively white residents protesting against a business that opens the door for more diversity in the community is disconcerting.

“This behavior will not deter Pacaso from continuing to serve buyers who wish to co-own real estate together. Pacaso is reporting this behavior to fair housing groups.”

Anti-Pacaso neighbors reject the company’s argument that it promotes diversity.

“What kind of diversity are they bringing to town when they’re only bringing in people who can afford a quarter-of-a-million-dollar six-week-a-year vacation home?” said Ric Henry.

Saturday’s protest attracted some Napa residents who are concerned about Pacaso’s effects on their own city.

“Our communities need to support one another,” said Kathleen Stewart-Lightner, who said she lives in a close-knit Napa neighborhood. “We don’t want people there who are not invested in the community.”

A lot of her neighbors are elderly, and she’s worried about their homes being snapped up by Pacaso.

Another protest against Pacaso is scheduled for 1 p.m. Saturday at Lyman Park.

Photos: These Napa homes—priced around $750,000—are hot properties. What do you get for that price?

The Town Council debates whether fractional arrangements amount to ordinary second-home ownership, or a dodge of a short-term rental ban.

It's about preserving the community

Letters: It's not about not blocking diversity.

With help from the Measure T sales tax, the City of St. Helena is planning to repave the Crinella subdivision.

Activists gathered on Sunday outside of a Pacaso house on Kearney Street to protest the home-sharing start-up.

A judge has dismissed part of a lawsuit brought by the home-sharing company Pacaso against the City of St. Helena, in a dispute centering on a definition of a timeshare.

A St. Helena house has become the latest flashpoint in an ongoing conflict between the home co-ownership company Pacaso and its critics.

Anti-Pacaso activists gathered for a protest Saturday at the corner of Hillview Place and Vineyard Avenue.

"Timeshares Fracture Neighborhoods" and "Stop Pacaso" were among the signs on display during Saturday's protest.