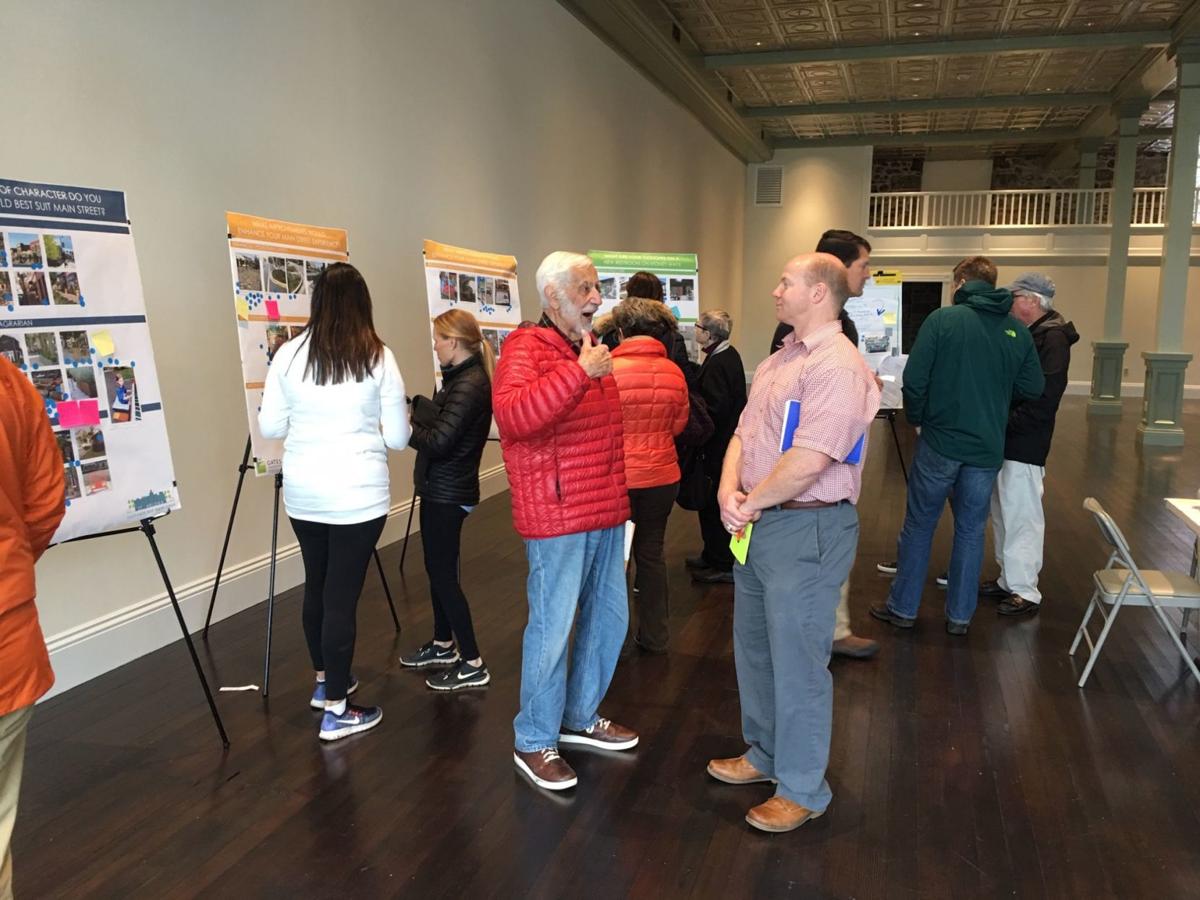 Bill Ryan chats with Alex Croskey of BKF Engineers, one of the city's consultants, during a recent open house about downtown St. Helena's streetscape. 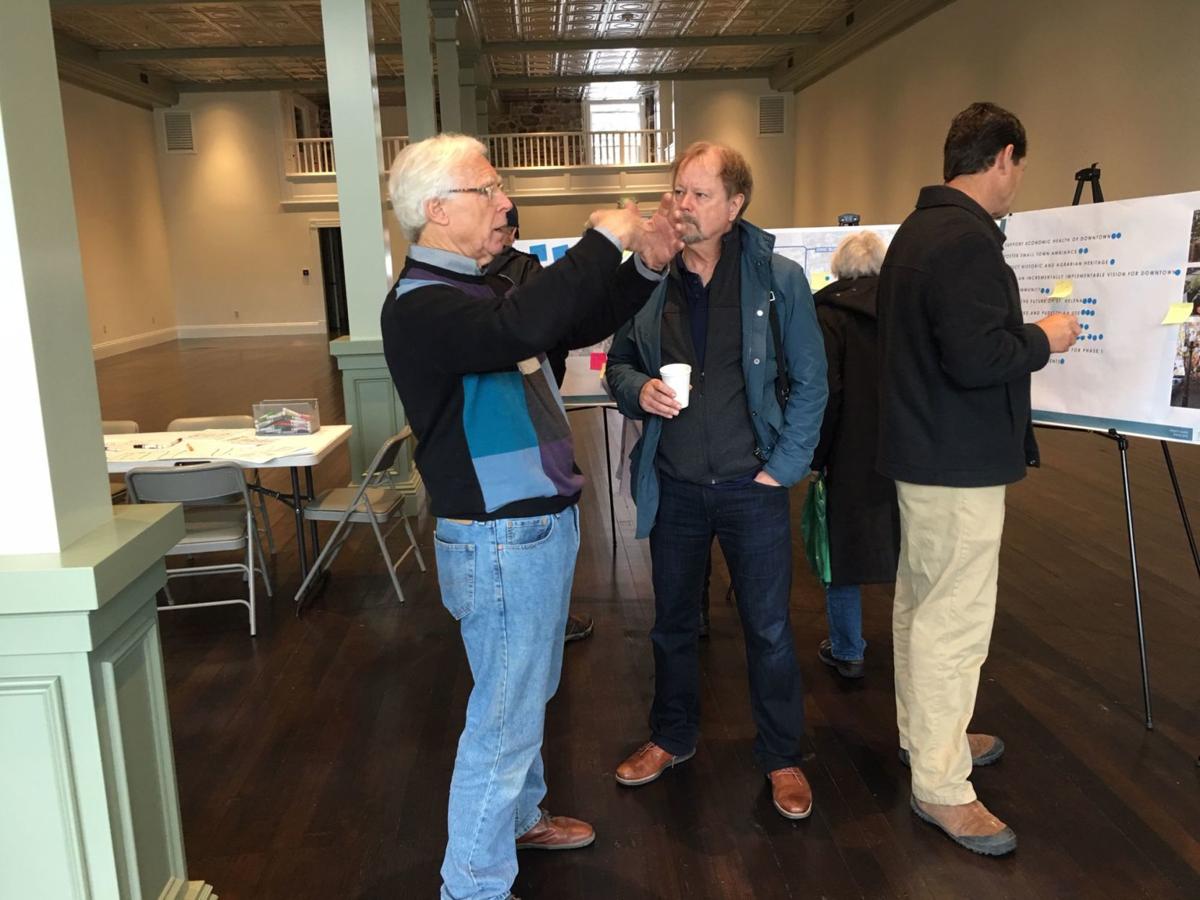 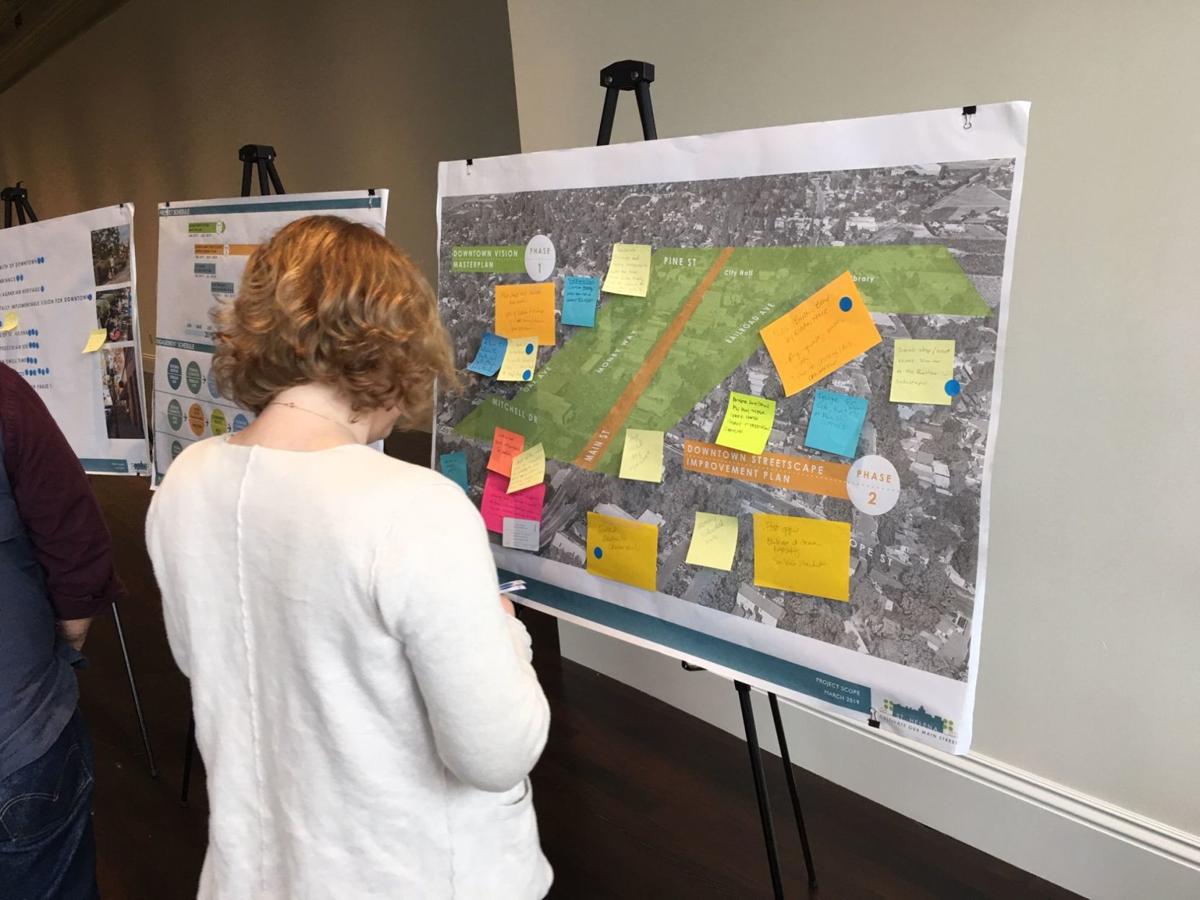 People used sticky notes to jot down suggestions on improving the downtown. 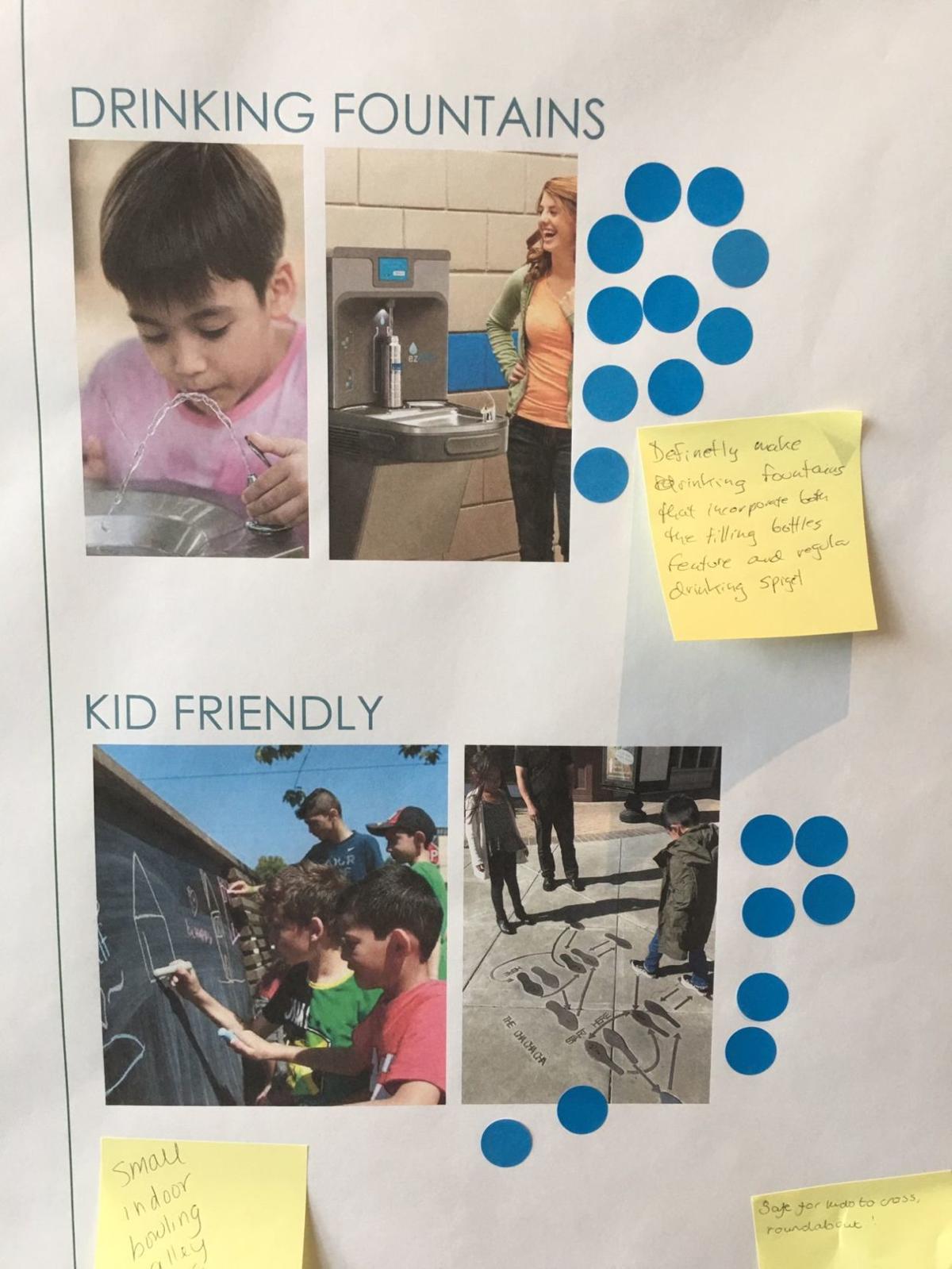 Attendees were encouraged to stick blue dots next to their favorite concepts, such as drinking fountains and kid-friendly improvements.

About 180 people signed in during the four-hour drop-in event at the vacant Masonic building, and consultant David Gates estimated the total crowd at between 200 and 250. Four students from St. Helena Elementary School’s fourth- and fifth-grade leadership class also attended to share input provided by 240 classmates.

Photos of streetscape concepts and architectural designs from other cities were displayed, and guests were given blue colored dots to stick next to the most appealing photos.

“Pots and planters, that’s nice. Make the street look pretty,” said Ester Akersloot, placing one of her dots, then gesturing toward another photo of a planted median strip. “This would be pretty arty, wouldn’t it? But I don’t think it’s necessary myself. We need better sidewalks, for sure.”

Last year Akersloot successfully lobbied the city to design a continuous sidewalk on the south side of Hunt Avenue so that residents like her can safely walk to the downtown. During the open house, she spoke in favor of building a new public restroom off Main Street and installing directional signs to help people find the existing restrooms at Lyman Park and Lewis Station Park.

Bill Ryan, one of the organizers of the St. Helena Street Piano at Lyman Park, said he’d like to install a second piano at a new “mini-parklet” – a pocket of public space created by bulbing out the sidewalk, often at the site of a crosswalk.

“They’re all over San Francisco,” Ryan said. A street piano at a mini-parklet “would have a nice local, organic appeal, and it suits both locals and visitors,” he said.

Tom Allen, whose Downtown Renaissance project explored similar ideas, was excited about the renewed push to spruce up the downtown space.

“Streetscape improvements, gathering places for pedestrians, fixing up the alleyways, more attention and resources for the trees – this is great,” Allen said.

In addition to comments about the streetscape, people used the open house to weigh in on the Adams Street property, City Hall, a potential new hotel, and the need for a community center.

“We asked them to design the stove but they’re looking at the whole kitchen,” said David Gates, one of the consultants guiding the project.

He saw that as a sign that there’s strong public will to design a comprehensive project that builds on St. Helena’s unique sense of place.

“People are starting to realize they have an opportunity here,” Gates said. “It’s very exciting.”

The input from Friday’s open house will help shape the design of the downtown streetscape project. Construction of the new sidewalks is scheduled for spring 2021.

The city of St. Helena and a team of consultants are looking for input to guide an extreme makeover of the downtown’s public spaces.

The removal of the York Creek Dam, the Hunter project, and the Farmstead hotel are just a few of projects and proposals that are working their…

Youth and family services, housing, and a plethora of Public Works projects are on the city of St. Helena’s to-do list for 2019.

The next six months are shaping up to be a pivotal time for Main Street businesses as the city promises swift action to stimulate commerce.

The first “Spruce Up St. Helena” spring cleaning day will be held from 9 a.m. to noon Saturday, May 4.

New landscaping, a mid-block crosswalk, and an art walk are among the ideas that could be part of a comprehensive overhaul of St. Helena’s dow…

St. Helena's Adams Street property is not for sale

The St. Helena City Council will discuss the future of the Adams Street property at 6 p.m. Tuesday, May 28, at Vintage Hall.

Setting the record straight on the Adams Street parcel (Part 1)

We missed the meeting on the Adams Street parcel as we were on an archaeological tour of Ancient Greece. History is important — no less so in …

Thanks for helping with the St. Helena Street Piano

St. Helena Street Piano founder Bill Ryan thanks three people who help each year with the piano, which is located from spring through fall, in Lyman Park.

Bill Ryan chats with Alex Croskey of BKF Engineers, one of the city's consultants, during a recent open house about downtown St. Helena's streetscape.

People used sticky notes to jot down suggestions on improving the downtown.

Attendees were encouraged to stick blue dots next to their favorite concepts, such as drinking fountains and kid-friendly improvements.