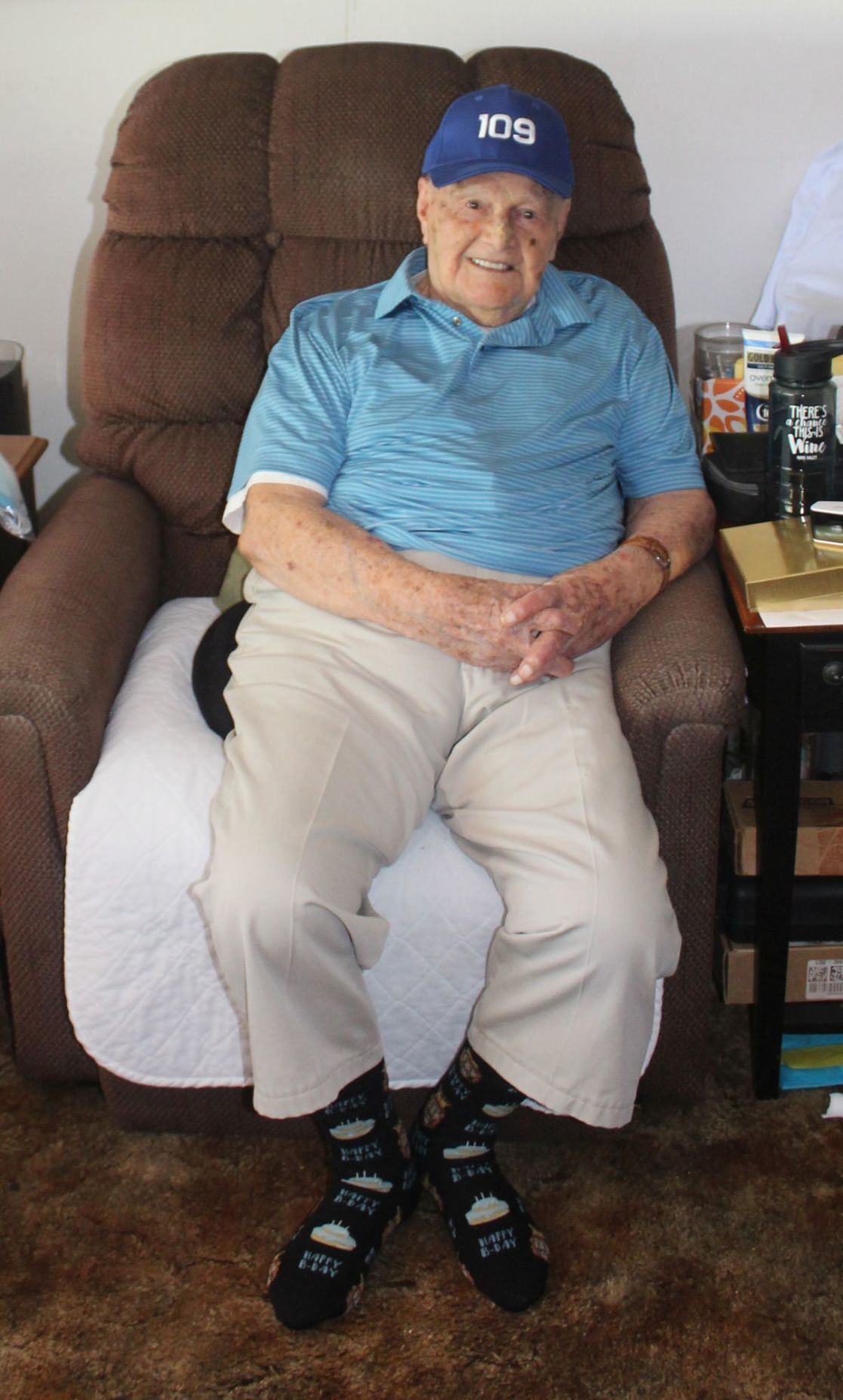 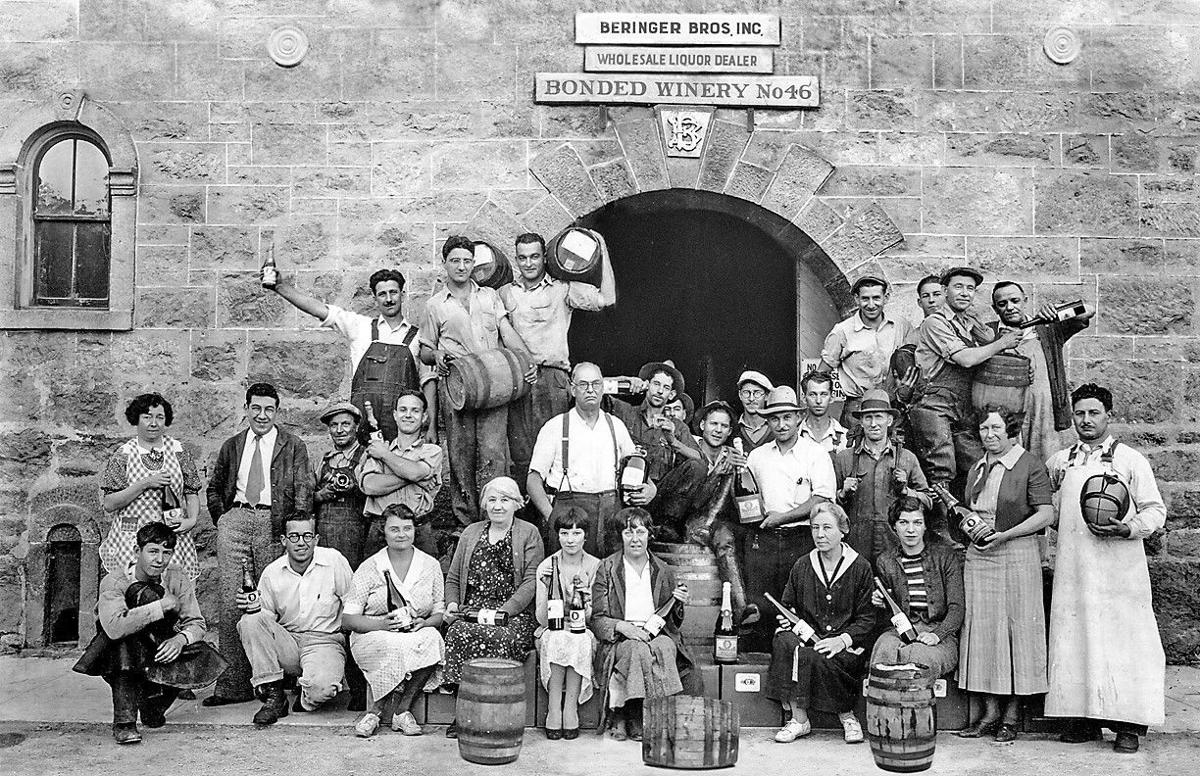 Beringer employees celebrate the end of Prohibition in 1933. Raymond Monroy, who worked at Beringer at the time, is in the second row, fourth from the left, holding a wine bottle. 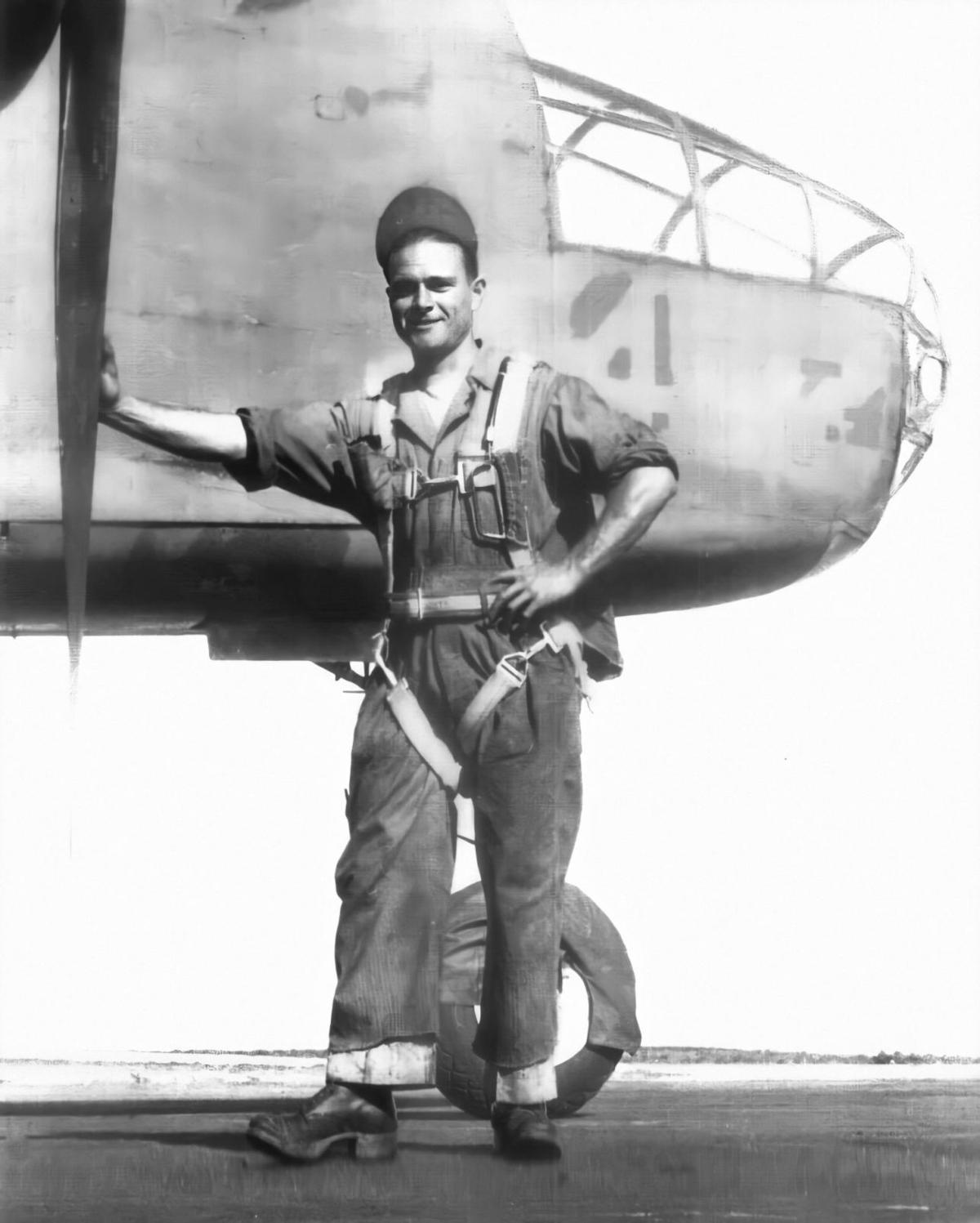 An enhanced photo of Raymond Monroy during World War II.

As Raymond Monroy celebrated his 109th birthday this week, he sipped from a plastic bottle with the message, “There’s a chance this is wine.”

Given his remarkable longevity, easy smile and firm handshake, it’s more likely to contain something that bubbled up from the fountain of youth.

Monroy turned 108 during the early days of the pandemic, so he couldn’t have visitors. St. Helena firefighters and police officers made up for it by driving past his house with their lights flashing and wishing him happy birthday over their loudspeakers.

This year, with vaccines widely available, Monroy was able to celebrate his 109th birthday in the company of his family, in the south St. Helena home he built with his own hands. His birthday was on Tuesday, but the family celebrated it on Sunday.

Monroy is liable to greet you with the sort of handshake you’d expect from an athlete one-fifth his age. If you wince or register surprise, he might mischievously ask, “You up for another?”

And when you leave, he’ll send you off with his longtime motto: “Happy always.”

It’s difficult to put Monroy’s age into perspective. The Titanic sank one month before he was born on May 11, 1912. Arizona had recently been admitted as the 48th state. Incumbent President William Howard Taft was soon to beat former President Teddy Roosevelt for the Republican presidential nomination. The thought of a world war was inconceivable, much less two of them.

Born in Arizona and raised in Humboldt County, Monroy came to the Napa Valley in the early 1930s and got a job working for Fred Abruzzini at Beringer Brothers, one of the few wineries that remained open during Prohibition under a federal license authorizing the production of sacramental wine.

He remembers going to San Francisco with co-workers Otto “Tiny” Beringer and Roy Raymond to join 200,000 other people who paid a quarter apiece to walk across the Golden Gate Bridge on the day it opened on May 27, 1937.

Farmworkers and cellar workers tended to speak Italian back then, so Monroy learned Italian. Over the years, Italian gave way to Spanish, so Monroy learned Spanish too, eventually becoming fluent enough to teach the subject at St. Helena High School, where he was also a vocational arts aide.

After leaving Beringer, Monroy worked as a shipfitter at Mare Island. He had Sundays off, so he was puzzled to be called in to work on Sunday, Dec. 7, 1941. He didn’t have a phone at the time, so he got the news from a neighbor. Monroy’s response: “Where’s Pearl Harbor?”

Enlisting months later at the age of 30, Monroy was the “old man” of his unit, with his new wife Maria carrying their first child back home, he told the Star’s Carolyn Younger in 2006.

“Boy that was a hard decision, what with a baby coming and all,” he said. “I had a little card in my pocket that said I was going to be drafted. You know what that meant — I was going to go to the front lines. That wasn’t for me.”

His decision to enlist rather than be drafted, along with his experience at Mare Island, got him assigned as a mechanic in the Army Air Corps, working on planes in the Mariana Islands and Guam as the U.S. military island-hopped toward Japan.

It was safer than being on the front lines, but not by much. He was once in a B-25 that was shot down by enemy fire.

“The rudders were shot off and we went down but we were rescued — me, the copilot and the pilot and the gunners, all kids,” Monroy told the Star in 2006. “They were good kids. I was sorry that I saw a lot of them go. They didn’t come home.”

He spent most of the rest of his career as a flight engineer at what is now called Travis Air Force Base.

Raymond and Maria, who died in 2011, had seven children together. Today he has 10 grandchildren and four great-grandchildren.

Bob Frescura has been Monroy’s neighbor for 44 years.

“You couldn’t meet a nicer man,” Frescura said. “He’s one of the sweetest people I’ve known. … And he has wonderful children. Their support has helped him live as long as he has.”

One of Monroy’s daughters, Anita Peters, said he was a very loving but strict father.

“If we weren’t home by 6 o’clock at night, we were in trouble,” she remembered.

The entire family remains close, but Sunday's party was the first time they’d been together in over a year. Monroy often said the secret to living a long life is “raising a good family,” and he was obviously delighted to be surrounded by them.

St. Helena resident Raymond Monroy turned 108 on Monday. And no, that's not a misprint.

Four generations of family and good friends gathered for lunch at Pacifico in Calistoga to celebrate the 106th birthday of their patriarch, Ra…

A coronavirus-themed piñata took a bashing at this senior residence in Virginia Beach. Watch the festive video, filmed at Westminster-Canterbu…

In a survey asking St. Helenans to describe their priorities for city services, fire and police services ranked highest.

City officials expect revenues to rebound significantly in the next fiscal year as St. Helena recovers from the pandemic, but balancing the budget will still take some work.

The St. Helena Unified School District is poised to become Napa County’s first school district to make the promotion of social justice and equity one of its core goals.

Beringer employees celebrate the end of Prohibition in 1933. Raymond Monroy, who worked at Beringer at the time, is in the second row, fourth from the left, holding a wine bottle.

An enhanced photo of Raymond Monroy during World War II.