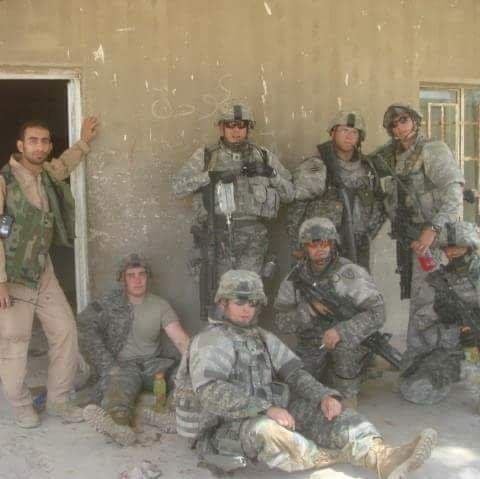 LJ Montelli (sitting, second from left) serving in Iraq in the late 2000s. 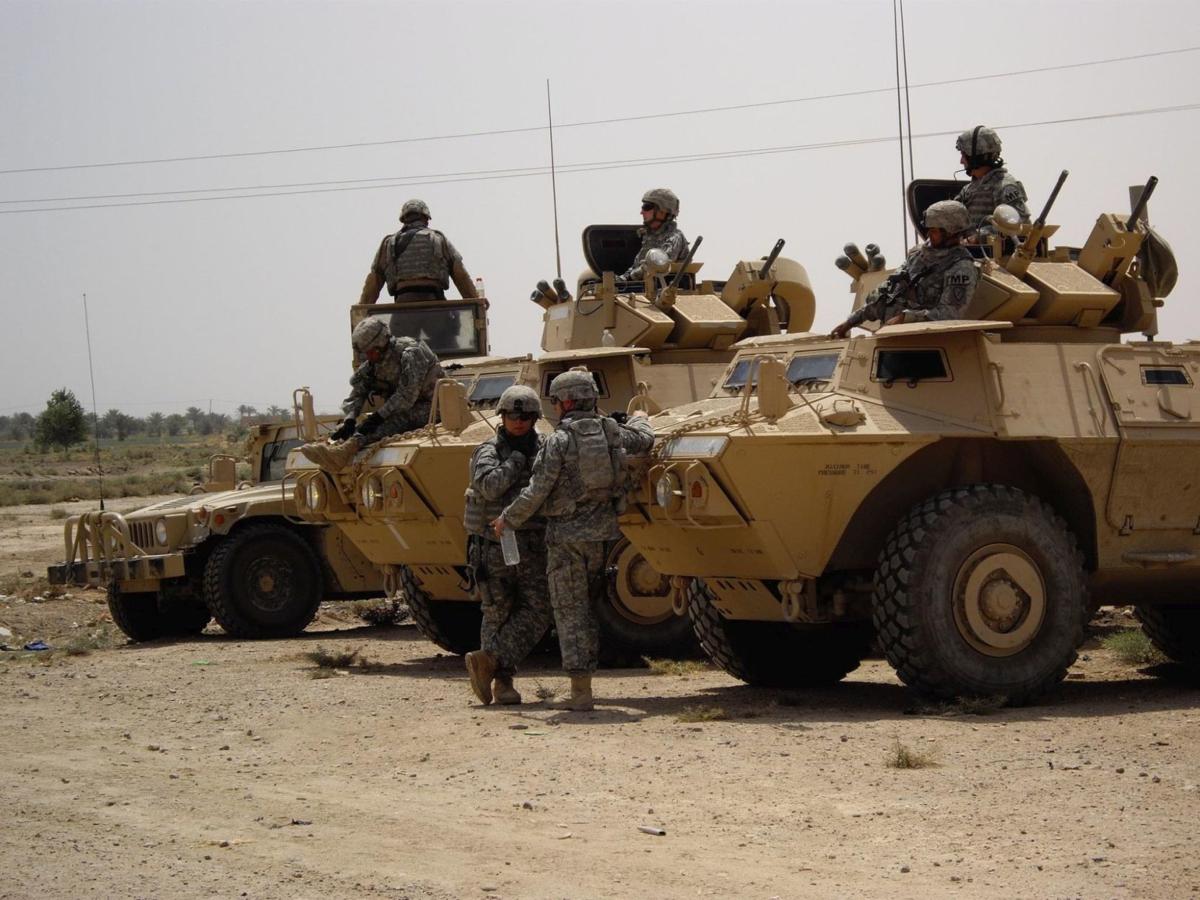 LJ Montelli took this photo of U.S. troops with their Armored Security Vehicles. Montelli was the driver of one of the vehicles. 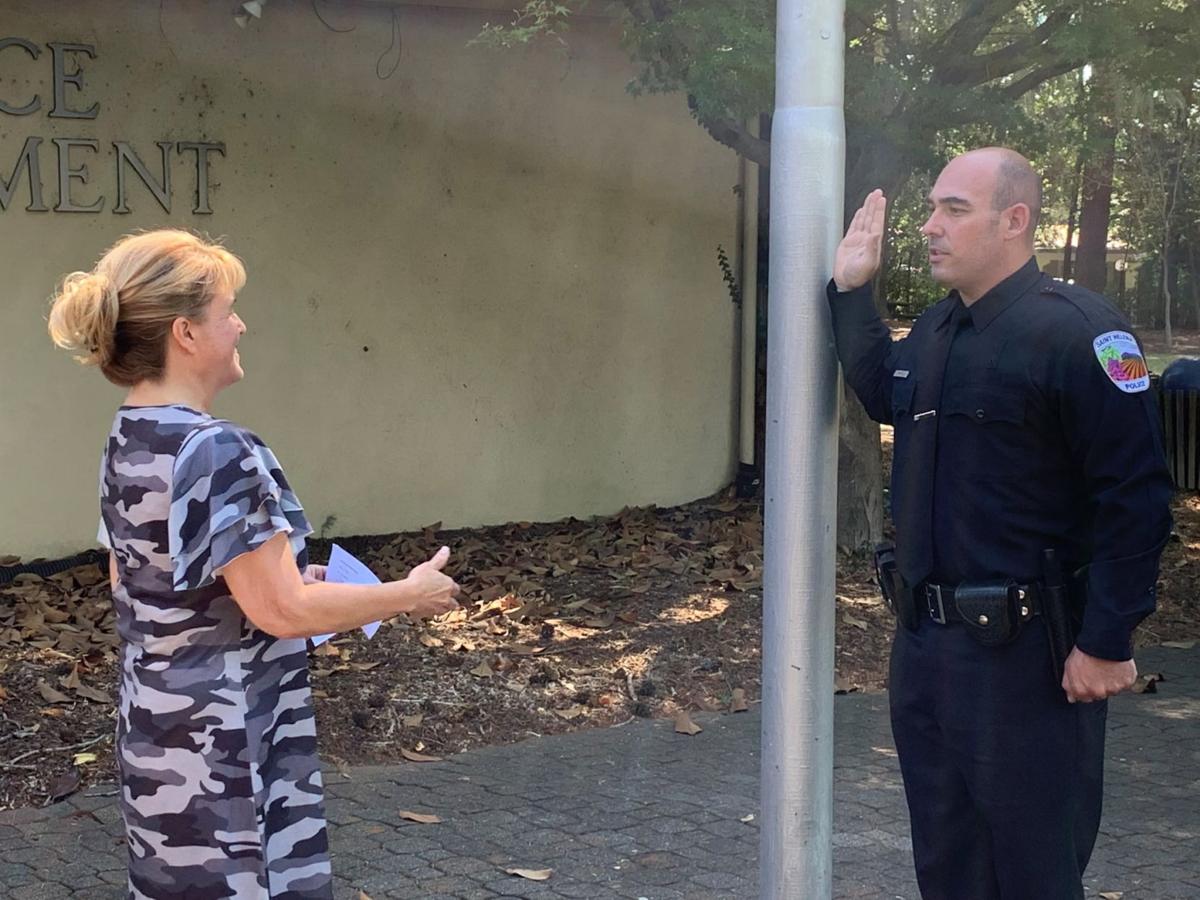 LJ Montelli has served in some of the world’s most dangerous places and shed blood for his country more times than he cares to talk about.

Nobody in their right mind could say he owes America, or his home town of St. Helena, another hour of his time. Yet here he is, the newest member of the St. Helena Police Department.

From Ramadi to Railroad Avenue, public service has been a constant for Montelli, who comes from a military family.

“Growing up in St. Helena, everybody knows each other and helps each other out,” he said. “But when you look outside our small town, not a lot of people help each other. I felt like I could help everybody by joining the military.”

The 9/11 attacks, which occurred when Montelli was 14, only solidified his plans to join the Army. He graduated from St. Helena High School in 2005 and immediately left for boot camp in Missouri.

Montelli had always been drawn to law enforcement, so the military police was an obvious choice. His first overseas posting was in South Korea, conducting joint operations with the South Korean army and training them to do police work.

After a stint at Fort Lewis in Washington, Montelli was sent to Iraq, where he trained Iraqi police on how to do police work while having positive interactions with civilians.

“Our model was hearts and minds, so giving out learning supplies was a huge thing,” said Montelli, who was kept well-supplied by his mother, Lisa Montelli, library media specialist at St. Helena Primary School.

Like ours, Iraq’s social structure is hierarchical, with some people having more power and privileges than others, Montelli said. But unlike America’s, Iraq’s social hierarchies are extremely rigid.

Regular Iraqis also have a unique attitude toward guns, Montelli said. They’re not fazed by the presence of rifles, which are commonplace, but they’re scared by the sight of a pistol. Noticing that, Montelli urged Iraqi police not to wave their pistols around to shoo people away.

“I told them I understood this was a useful tool, but they were instilling fear instead of trust,” he said. “Once you build trust and break that barrier, you can communicate and get things done more easily and safely.”

In addition to training local police, Montelli worked with U.S. troops to find and confiscate weapons caches and capture suspected insurgents, who would be placed under Montelli’s supervision once they were in custody.

Montelli downplays the injuries he sustained in the military. He’d rather recall handing out candy bars and Airheads to Iraqi kids and watching “The Unit” with the other members of his squad.

On Dec. 5, 2007, Montelli suffered burns and major head and lung injuries when a convoy he was riding in was rocked by an explosion. He was briefly treated in Germany before returning to his unit in Iraq.

It was only then he found out about an article in the St. Helena Star in which his family revealed his various injuries: skull and facial fractures sustained while clearing a building in Korea, two flesh wounds from enemy fire in Iraq, a concussion and compressed nerves sustained after falling two stories through a booby-trapped house, and then the recent explosion that had required doctors to drain fluid from between his skull and brain.

The article also told of Montelli earning recognition “for outmaneuvering the enemy during a firefight and spotting a trip wire,” as well as receiving a wedding ring in the mail from the widow of a sergeant who’d died in Iraq after telling his wife of Montelli’s life-saving heroism.

Montelli was taken aback to learn of the article. He’d joined the military to help people, not get clubbed in the head, shot and blown up. He thought the article glorified the wrong aspects of military service and revealed things that were “nobody’s business.”

“It was like glorifying a parent who works 18 hours a day and then only spends four hours with their kids,” said Montelli. “People do things because they have to, not for the glory of it.”

He knew other members of the military who bragged about the decorations they’d received for valor in combat, but that concept never appealed to him.

“Most of the time in the military when you’re overseas you’re just helping people, interacting with the locals, passing out food and learning supplies, or just talking,” he said. “I didn’t even know I had any awards until after I got back.”

Back to St. Helena

By 2010 Montelli had left the military and was back in St. Helena. He got a job doing construction work for Josh and Steve Galusha (“great people,” he said) and later as a welder/fabricator at Burgstahler Machine Works, but his ultimate goal was to go to police academy and start a career in law enforcement.

However, the timing was never right for Montelli and his growing family to forego a steady paycheck while he attended police academy. First his wife, Tiffany, gave birth to their first child, Gia (now 11). Then they bought a house in Angwin. Then they had a second child, Serafina (now 6). Then Tiffany opened a store, now known as Tiffany and Kids, in downtown St. Helena.

Things finally clicked last year when LJ, with the approval of the “super-supportive” Tiffany, was sponsored by the City of St. Helena to attend the Napa Valley Police Academy. He graduated in June and was sworn in as a St. Helena police officer.

He’s now working alongside longtime St. Helena cops like Chief Chris Hartley and Lt. Justin Tharp, the same authority figures he remembers from his teenage years when he’d get admonished for riding his four-wheeler in Sulphur Creek.

“It’s been a delight to work with everyone, and to see how my impression of these people I met when I was a kid has changed,” Montelli said.

While on duty, Montelli likes to engage with people on a human level and make it clear that behind the badge he’s just a regular guy. Most locals have known him since he was a kid, so there’s already a built-in trust factor, he said.

“I’m able to talk to them sort of as a semi-friend,” Montelli said. “They think, ‘OK, I’ve known this guy for years. He’s not doing this to be mean. He’s just doing a job. He doesn’t write the rules. He just enforces them.’ So far everybody has understood that.”

“I’m a person in the community like everybody else, born and raised here,” he said. “I’m not just a badge.”

Listen as Napa County veterans describe their wartime experiences - and their return home - from our 2019 edition of They Served With Honor.

Chris Rubio reflects on his story

Rita Iadarola recalls life aboard the hospital ship U.S.S. Repose during the Korean War, both on duty and off. (The clicking in the back groun…

Harold Bunnell talks about his mission during World War II

Harold Bunnell on the closeness of death in a war zone

Harold Bunnell reflects on the constant presence of death in a combat zone.

Louis Daugherty on the mission of his unit in Vietnam

Sheila Daugherty reflects on the men she treated in the hospital

The mission in Kuwait

Mike Beguelin describes his mission in the Gulf War

Ron Smarker of Napa describes how his Marine unit was assigned to set up ambushes for enemy forces.

Ron Smarker describes how he was wounded

Ron Smarker of Napa recounts Feb. 10, 1967, the day he was severely wounded by North Vietnamese fire.

Ron Smarker describes how he was rescued

Ron Smarker of Napa recounts how he was rescued after being severely wounded in Vietnam.

Leah Heil discusses the shock of her abrupt deployment to Iraq in 2004.

Dominic Heil describes the mission of the Army unit where he was the intelligence officer in Iraq.

Bob Nance of Napa describes the way he would approach a typical operation to land troops for a raid in Vietnam.

Bob Nance describes how to fly in combat

Bob Nance discusses how to fly in combat.

Bob Nance tells how he survived a serious crash at Mount Shasta in 2000.

Albert Freitas describes being a POW

Frostbite in the ball turret

Albert Freitas describes the case of frost bite that may have saved his life.

They Served With Honor: From Calistoga Eagle Scout to Army drones in Afghanistan

They Served with Honor: Marine diver’s path led from Vietnam War to art career in Napa

Jerry Egan's path led him from wartime diving duty to the creation of abstract art, and to his future wife in postwar Vietnam.

Napa Air Force veteran Robin Mueller is retired but she continues serving others at the Napa's American Legion Post.

The days of informal handshake deals, modest homes and mom-and-pop wineries are ending in the Napa Valley, and come the end of the year, so wi…

Tiffany Montelli’s clothing store catering to moms and kids has a new location and a new name.

Hundreds of endangered bats that lent gothic character to the St. Helena Public Cemetery and played a vital role in its ecosystem are dead after possibly being poisoned.

LJ Montelli (sitting, second from left) serving in Iraq in the late 2000s.

LJ Montelli took this photo of U.S. troops with their Armored Security Vehicles. Montelli was the driver of one of the vehicles.