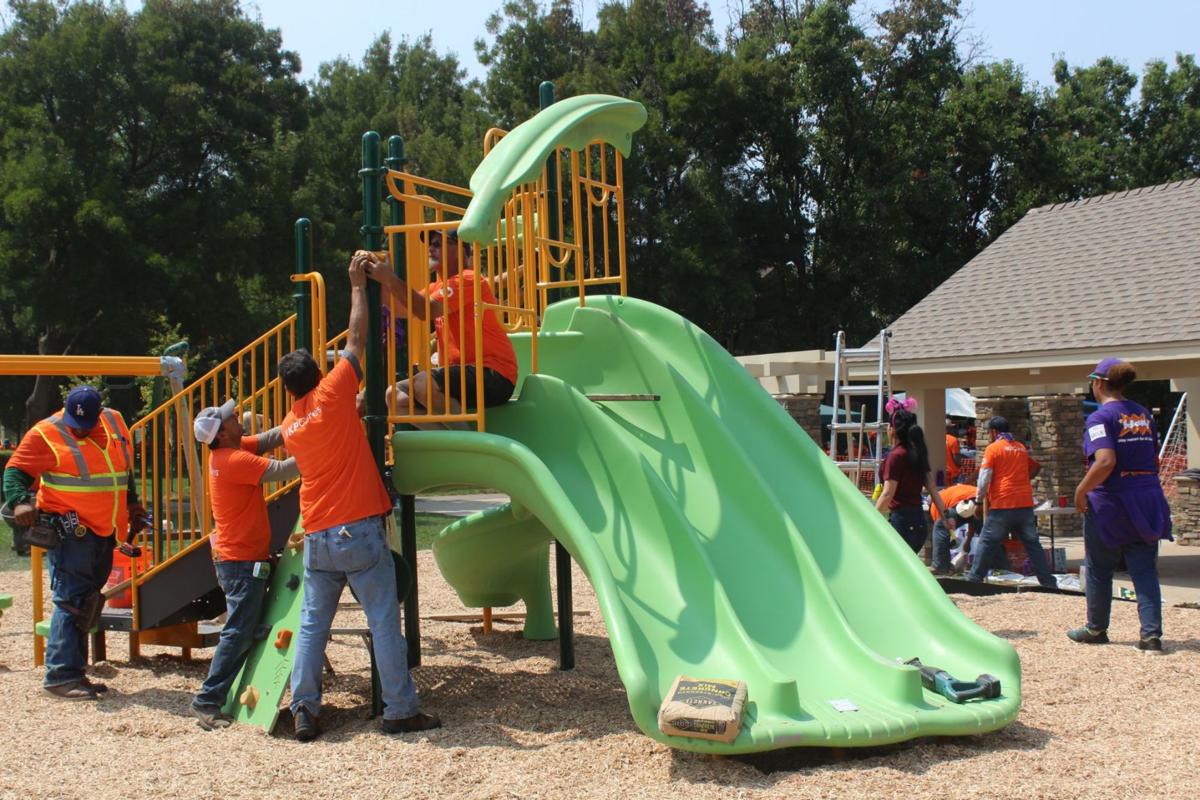 Volunteers put the finishing touches on a new playground at Stonebridge Apartments. 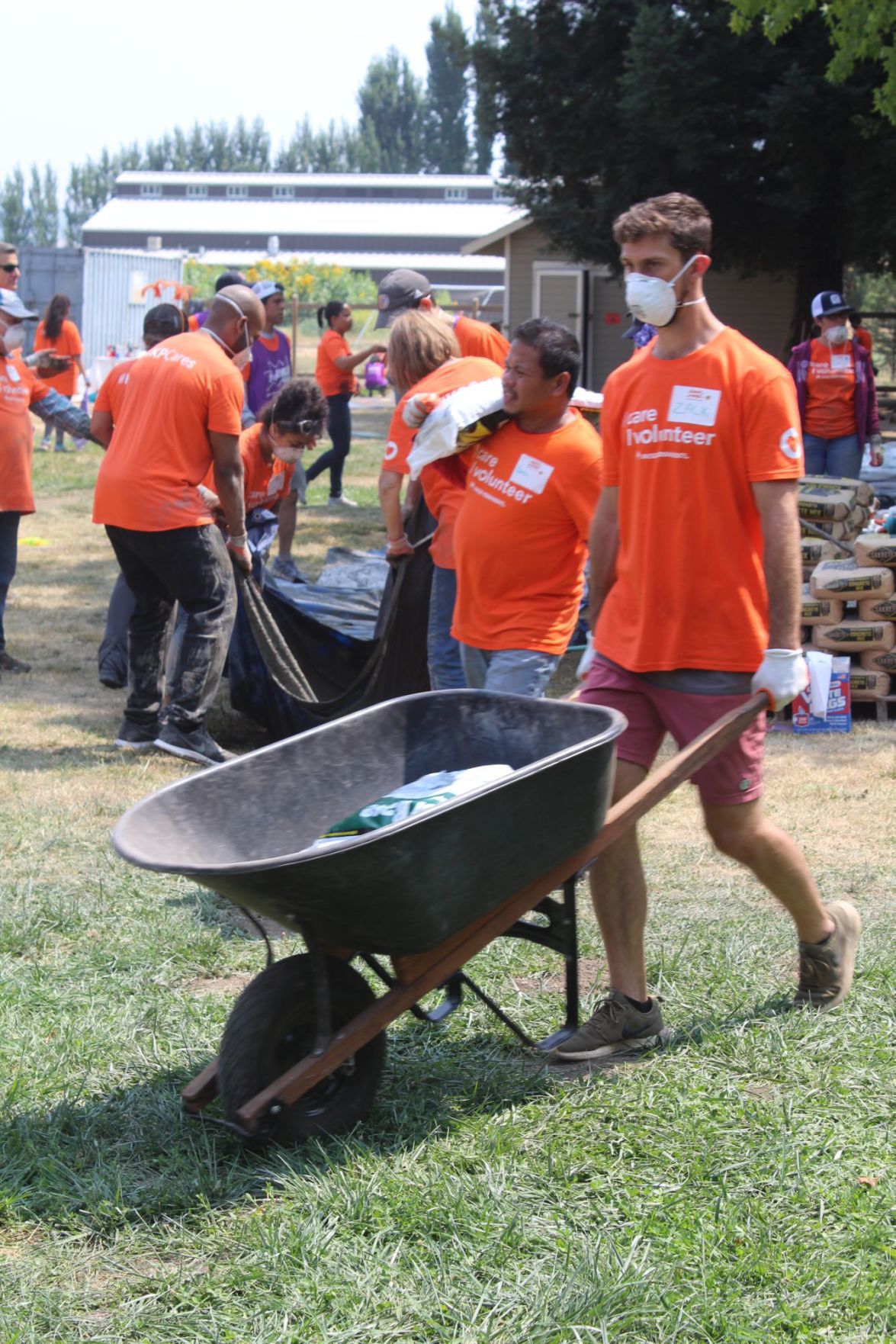 Volunteers haul cement for the foundation of the playground. 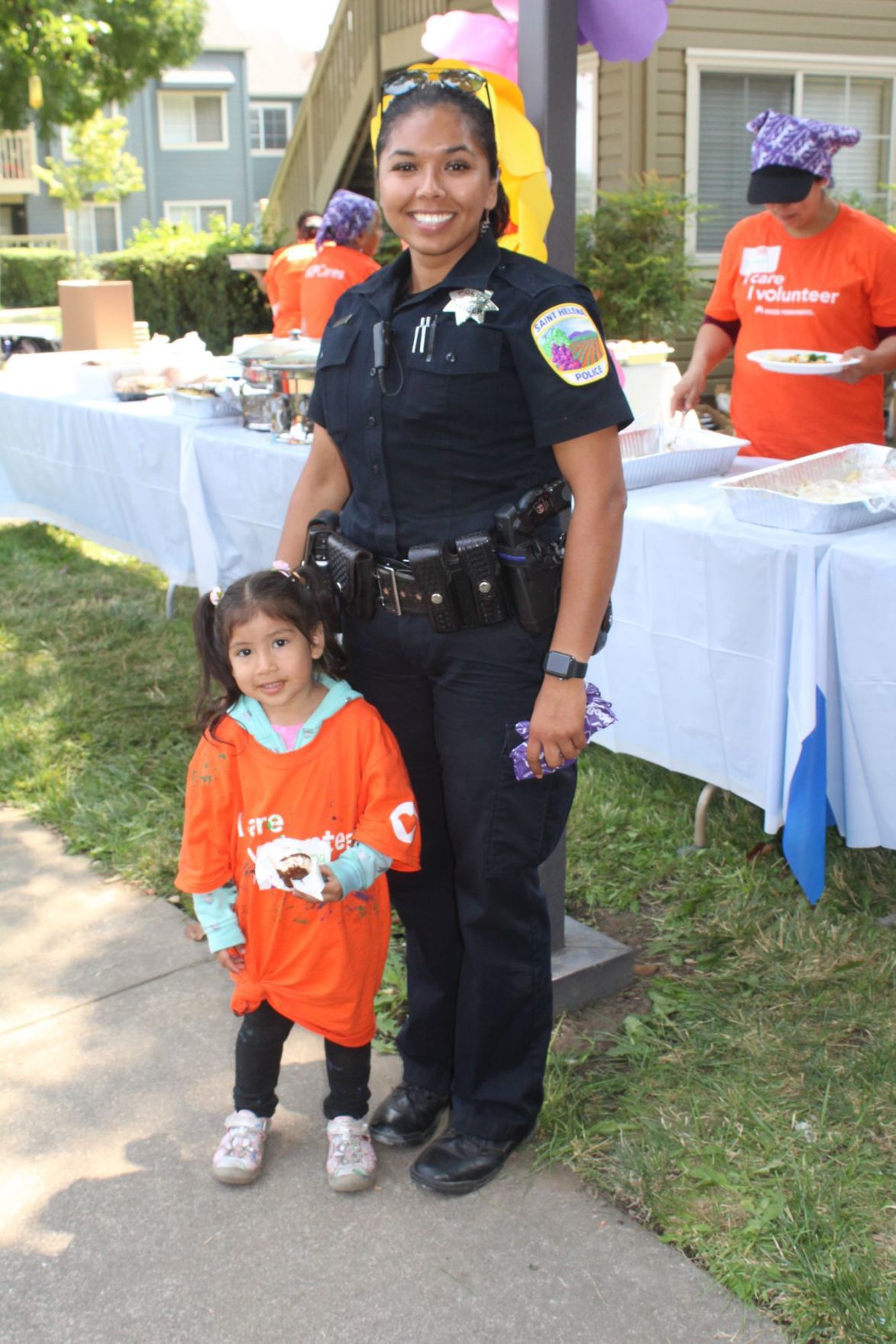 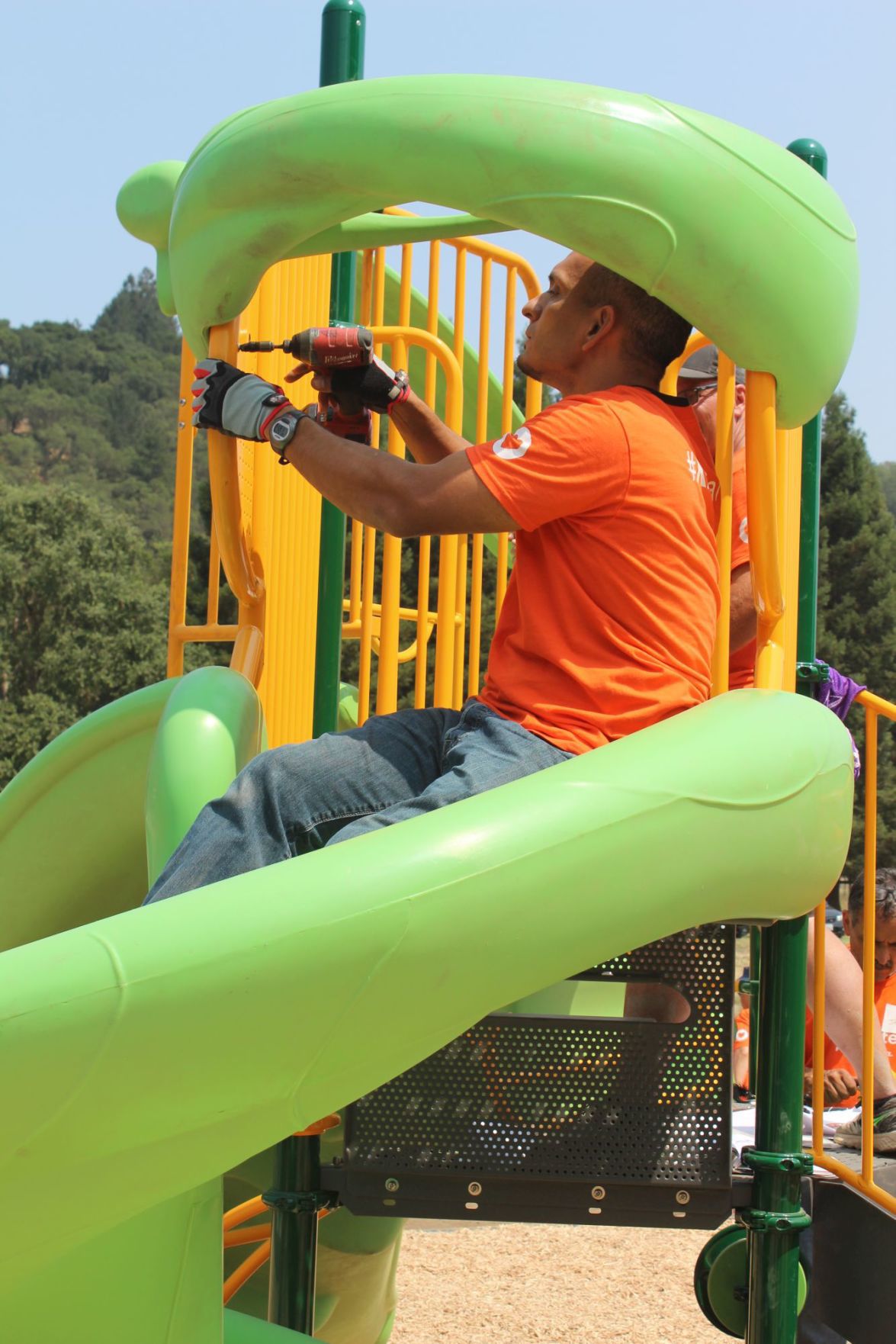 A volunteer installs a bolt on the new playground. 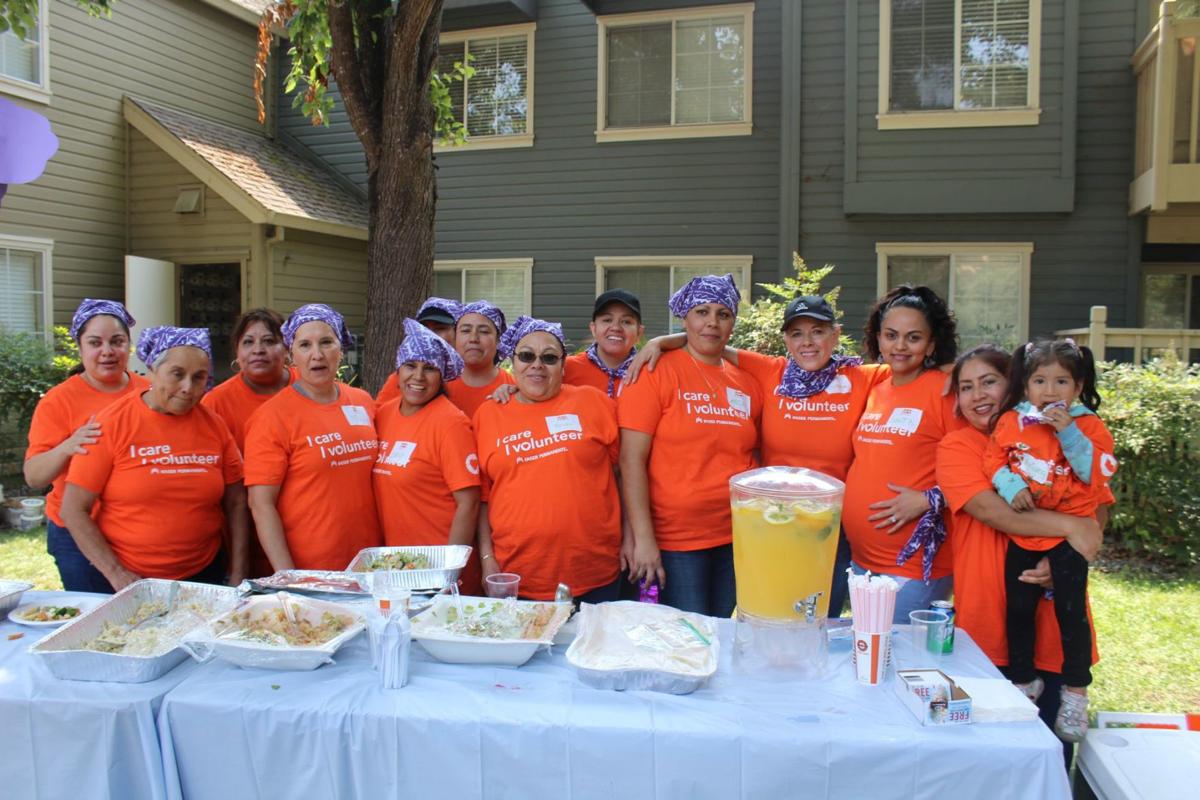 A volunteer uses a sledgehammer to pound a bolt into the border of the new playground. 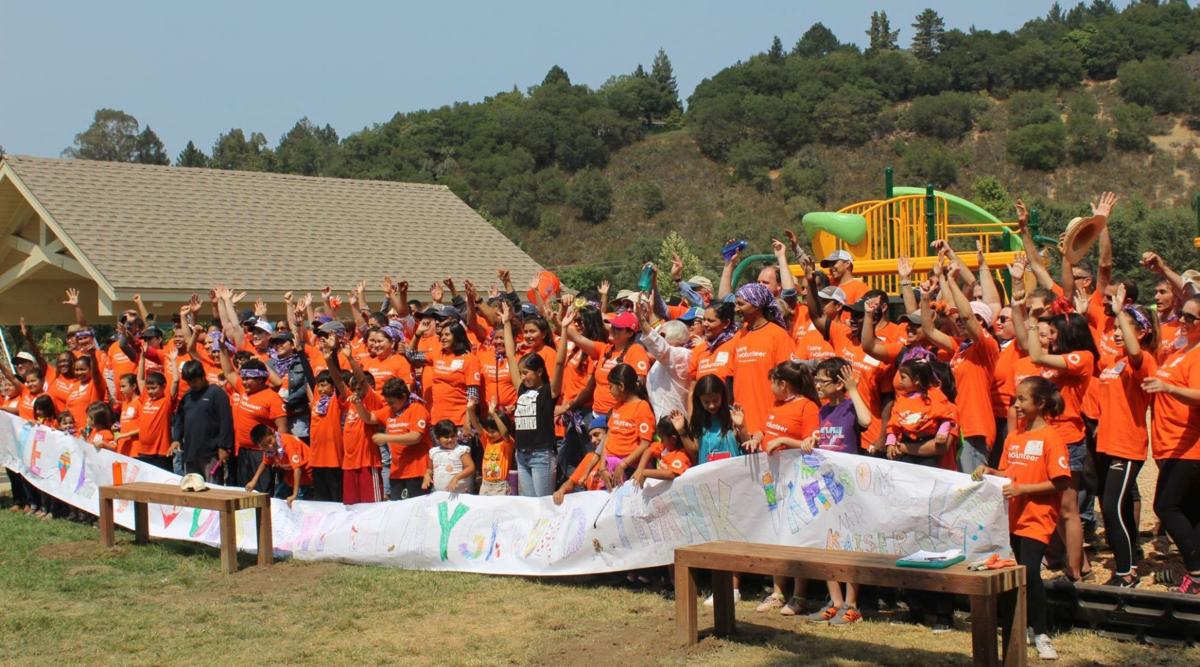 After more than five hours of work, volunteers gathered Saturday afternoon to cut a ribbon that had been decorated by kids and read, "We love our new playground -- thank U, KaBOOM and Kaiser."

A volunteer paints a cornhole station at Stonebridge Apartments.

Many hands do indeed make light work, but they can also create years of fun.

That’s what a throng of approximately 200 volunteers learned on Saturday when they built a playground and some adult exercise equipment at Stonebridge Apartments in five and a half hours.

EAH Housing, which runs Stonebridge, teamed up with Kaiser Permanente and the nonprofit KaBOOM! to build the playground, which will serve the 100 kids who live at the affordable housing complex on College Avenue.

Anai Ortiz, resource coordinator at Stonebridge, applied for a grant from KaBOOM!, which works with corporate partners to build playgrounds for low-income kids.

In this case, that partner was Kaiser, which provided 110 of its employees to serve as volunteers on Saturday. Kaiser employees from throughout the North and East Bay and as far away as the Central Valley made up the majority of the project’s 200 volunteers.

Wearing orange “KP Cares” shirts, the crew shoveled 135 cubic yards of mulch, mixed five pallets of concrete, and built a playground that includes a slide, ladders, stairs, a climbing wall, a sandbox, monkey bars, a merry-go-round, and other fun features. Pull-up bars and other adult fitness equipment were installed nearby.

The design was based on input from Stonebridge kids, who were invited to design their ideal playground during a brainstorming session held by KaBOOM!

Ortiz said an EAH colleague told her about the KaBOOM! program. It turned out to be a perfect solution to replace Stonebridge’s old playground, which had a cracked slide and was no longer up to code. Ortiz also noticed that kids hadn’t been enjoying it much lately.

“This is a dream come true for the kids,” Ortiz said. “The kids got to pick the items and design it, so you know they’re going to enjoy it.”

After some prep work on Thursday and Friday, the main construction kicked off at 8 a.m. Saturday and was finished before 2 p.m., about half an hour ahead of schedule. The cement still had to set, so kids weren’t able to use the playground until Tuesday.

Volunteers had to be at least 16 years old, so the playground’s target audience couldn’t help with construction. However, they were provided with an activity and play area nearby and made thank-you notes for all 200 volunteers.

The Kaiser volunteers were aided by Stonebridge residents, EAH employees, and people from the community. Among the local volunteers were Mayor Alan Galbraith and City Councilmember Geoff Ellsworth, who are rivals in this year’s mayoral election but set their campaigns aside to build the playground.

“I shoveled more wood chips than I’ve ever shoveled in my life today,” said Galbraith, who spent about five hours moving an enormous pile of mulch into the playground area.

Ellsworth rotated through different tasks, moving mulch, hammering nails, mixing cement, bolting down the adult exercise equipment, and pounding down some big bolts with a sledgehammer, “which was probably when I most thought my back was going to go out,” he said.

“I made it through all of these activities without throwing my back out, so I’m pretty pleased,” Ellsworth said. “But this whole thing, with all the regional collaboration, was just remarkable.”

The St. Helena Montessori School wants the city to consider rezoning an acre and a half of land on College Avenue to allow for workforce housing.

Walking down eastern McCorkle Avenue is difficult these days. Two eight-unit apartment buildings are under construction at the same time: Our …

Riding with the St. Helena Police, getting an inside look at SHPD

For a few hours last week, it seemed so easy to bring affordable housing to St. Helena – you just needed a big enough crane.

About 30 volunteers participated in Coastal Cleanup Day in St. Helena on Saturday, as part of an international effort to clean up beaches and …

Volunteers put the finishing touches on a new playground at Stonebridge Apartments.

Volunteers haul cement for the foundation of the playground.

A volunteer installs a bolt on the new playground.

A volunteer uses a sledgehammer to pound a bolt into the border of the new playground.

After more than five hours of work, volunteers gathered Saturday afternoon to cut a ribbon that had been decorated by kids and read, "We love our new playground -- thank U, KaBOOM and Kaiser."

A volunteer paints a cornhole station at Stonebridge Apartments.