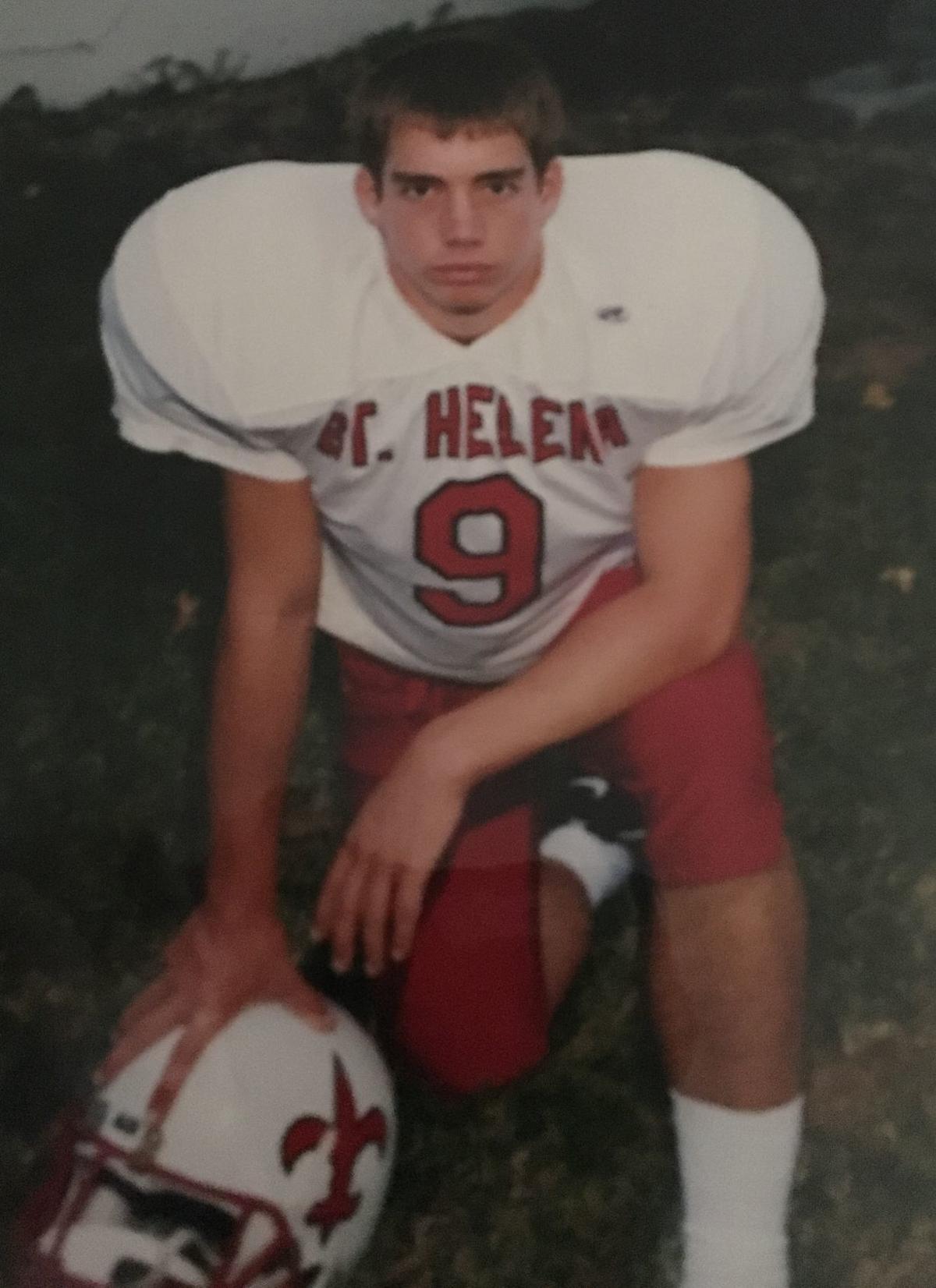 Even 20 years after graduating, Adam Beattie still holds a number of St. Helena passing records. In his career, he threw for 2,930 yards and 32 touchdowns, which stand as the 2nd and 3rd most in school history, respectively. 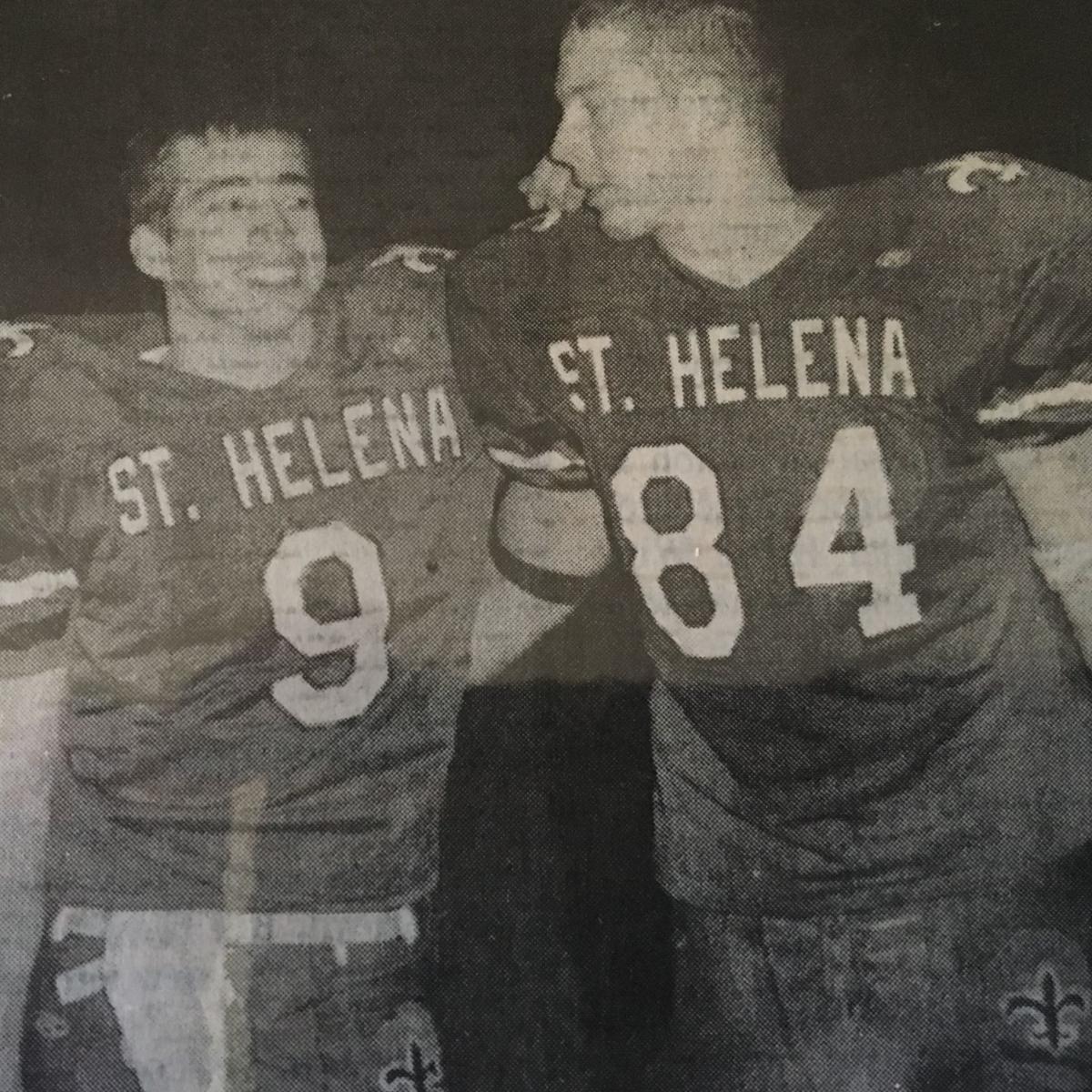 St. Helena quarterback Adam Beattie (9) and wide receiver Cliff Little (84) were a deadly 1-2 punch for the Saints on offense and defense in the late 1990s. Beattie will be inducted into the St. Helena Athletic Hall of Fame in October, joining Little, who was inducted last year.

It’s been over 20 years since Adam Beattie last donned a St. Helena uniform, but the former quarterback speaks of his playing days like they were yesterday.

With vivid detail, Beattie can recall his record-setting 98-yard touchdown pass to Cliff Little in 1998 or the epic Napa Valley clash between St. Helena and Justin-Siena in 1999 that ended in a Saints victory.

Very little has escaped his memory since he graduated in 1999, and for good reason: His career was one of the more memorable ones in St. Helena football history.

In his two seasons on varsity for the Saints, Beattie made sure that his name would have a place in the school record books for decades to come. Even now, he still ranks in the top five in school history for passing yards (2,930, second all-time), completions (173, second), touchdowns (32, third), yards of total offense (3,327, fourth) and all-purpose yards (3,327, fifth).

Yet when the call came that he would be one of six people inducted into the St. Helena Athletic Hall of Fame this fall, it still took him by surprise.

“It was just something that kind of fell off the radar,” Beattie said in a recent phone interview. “I moved out of St. Helena about five years ago. This means the world to me; it just wasn’t something I was expecting.”

Beattie will officially be inducted into the hall in a ceremony on Oct. 19 at Native Sons Hall in St. Helena. Making up this year’s class, the seventh in the hall’s short history, are Beattie, Terry O’Rourke (Class of 1977), Fred Miller (coach honoree), Bob “Bimmer” Sculatti (Class of 1946 and a Distinguished Service Honoree), Harland Morley (Class of 1954) and Beci Ivanoff (Class of 1987).

Being a top-flight athlete for the Saints, Beattie actually already has ties to the hall. Sculatti was his first football coach and Little, who was his No. 1 receiver during their playing days, was inducted last year.

“I consider St. Helena my hometown, so it’s an honor to be a part of that tradition,” Beattie said. “All the coaches I’m going to list, it’s going to make me cry, but I had awesome coaches.”

Beattie actually began his life in the Napa Valley as a middle schooler. His family relocated from San Francisco to St. Helena when he was starting the sixth grade at Robert Louis Stevenson Middle School.

As the new kid on the block, it took Beattie a while to feel at home in a place that was so alien compared to where he had spent the first decade-plus of his life. That process was catalyzed by his involvement in sports, which began with Carpy Gang youth football in the seventh grade. That’s also where he first met Little.

From there, Beattie became heavily involved in sports and spent more days practicing or playing than not. Be it baseball, basketball, track and field, or football, Beattie found a place in them all.

“Always keeping busy,” he said. “I was one of those active minds. If I wasn’t chasing girls, I was chasing a ball around.”

By the time he finished his freshman year at St. Helena High, Beattie realized his athletic future would be on the gridiron. He still ran track and played basketball all four years, but his real love was football.

“The most talented athletes were playing football and basketball, so I think I definitely wanted to be a part of that,” he said. “I was still new to the community. I had thrown a football around a little bit when I was a kid, but nothing like taking it seriously until Carpy Gang.

As a junior, he took over as the starting varsity quarterback and helped lead the Saints to a nine-win season. He passed for 934 yards and nine touchdowns, including the 98-yard pass to Little that is still tied for the longest touchdown pass in school history.

“I saw him before I snapped the ball," Beattie said about his record throw, "like ‘Cliff is wide open. I’m throwing this before he even turns.' It was a 5-yard out to the right and we were headed south, and I just threw it to him, hit him right in the chest. The (defensive back) tried to take a step at him and Cliff just went right around him and he was gone. He was not going to catch him. It was all Cliff.”

While his junior season was all-around solid, his senior campaign was one for the record books. This is where Beattie’s memory really kicks in.

He remembers that the year began with head coach Dan Boyett leaving the position, which was filled by Randy Neller. But even still, the Saints were locked in.

“We were ready from spring on,” Beattie recalled. “We knew we had a good team, had enough key players coming from JV that year that were going to be juniors. We took it seriously. We were doing spring ball in Calistoga, threw the ball in the summer time, my dad was running routes for me. We were excited.”

That excitement quickly translated into wins as the Saints started the year 5-0.

But their sixth game of the year, a matchup with Brookside Christian of Stockton, was one that will stick with Beattie, and not in a good way.

The ever-resilient Saints rallied and won their next three games, but saw their season end against Colfax in the first round of the Sac-Joaquin Section playoffs.

Still, when it was all said and done, the numbers Beattie put up that season were staggering.

He finished with 1,996 passing yards and 23 touchdowns, rushed for 280 more yards with three more scores, completed 122 of 232 pass attempts (both single-season records), had nine games with 100 or more passing yards, four games with 200 or more, completed an 89-yard touchdown pass (second longest in school history), accumulated 2,276 yards of total offense, and, for good measure, had two interceptions on defense playing strong safety.

Needless to say, he was an all-league and All-Napa County player.

When the season ended, he knew he had cemented himself as one of the best players in school history. Yet when he reflects on it now, Beattie is nothing but humble when he talks about what he accomplished.

“We can’t do it without the team,” he said. “I don’t want to be a broken record, but, yes, I had talent and Cliff had talent, but we had to have a great team.”

After graduating, Beattie played at Bowdoin College in Maine for two seasons before finally hanging up his cleats for good. He transferred to UC Santa Cruz, where he finished out his college days.

He returned to the Napa Valley not long after and has been working in the restaurant, food and beverage industry ever since. Currently, he’s the restaurant manager at Mayacama in Santa Rosa, a position he’s held for three-plus years.

In October, he’ll return to the place he still considers his hometown for a night with a heart full of pride and a head still full of vivid memories.

“It’s a huge honor,” Beattie said of his induction. “I was welcomed into this community; I was definitely a wild kid from the city trying to acclimate to a small town. But they really took me in, and it was through sports, and they were just good people, good families, and great school programs.

“The motto at RLS is ‘Do your personal best,’ and that’s something I’ve applied to my whole life.”

When: Saturday, Oct. 19.  A cocktail hour begins at 6 p.m. and dinner will be served at 7 p.m. with the induction ceremony to follow.

There are no physical tickets but name(s) will be on a reservation list at the door, so please include the names of all people attending on your reservation.

No reservations can be accepted after Oct. 15.

The St. Helena High School Class of 1954 celebrated its 65th class reunion Sept. 14 at the Salvestrin residence in St. Helena.

The St. Helena High School Athletic Hall of Fame will soon have a permanent home.

Even 20 years after graduating, Adam Beattie still holds a number of St. Helena passing records. In his career, he threw for 2,930 yards and 32 touchdowns, which stand as the 2nd and 3rd most in school history, respectively.

St. Helena quarterback Adam Beattie (9) and wide receiver Cliff Little (84) were a deadly 1-2 punch for the Saints on offense and defense in the late 1990s. Beattie will be inducted into the St. Helena Athletic Hall of Fame in October, joining Little, who was inducted last year.