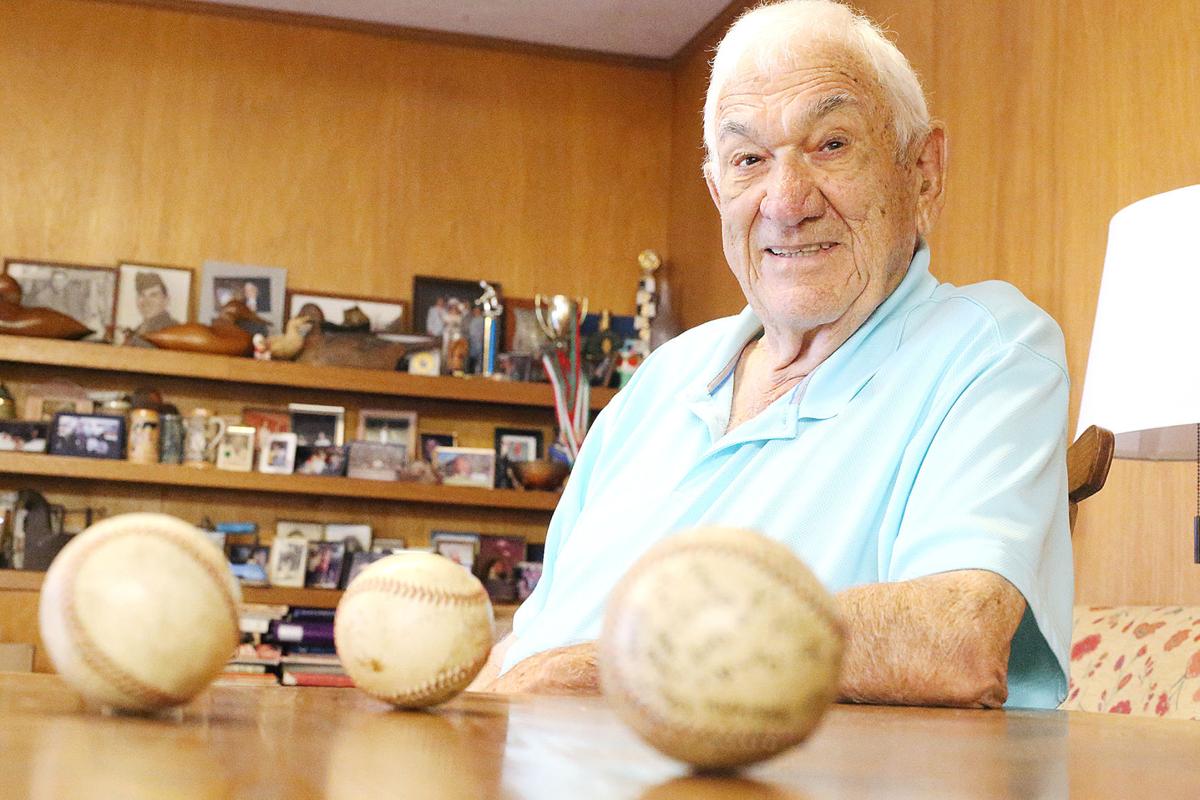 Henry "Chops" Ghiringhelli is seen at his kitchen table with baseballs signed by teamates and friends over the years, at his home in Rutherford on Friday. Ghiringhelli will be inducted into the St. Helena High School Athletic Hall of Fame. 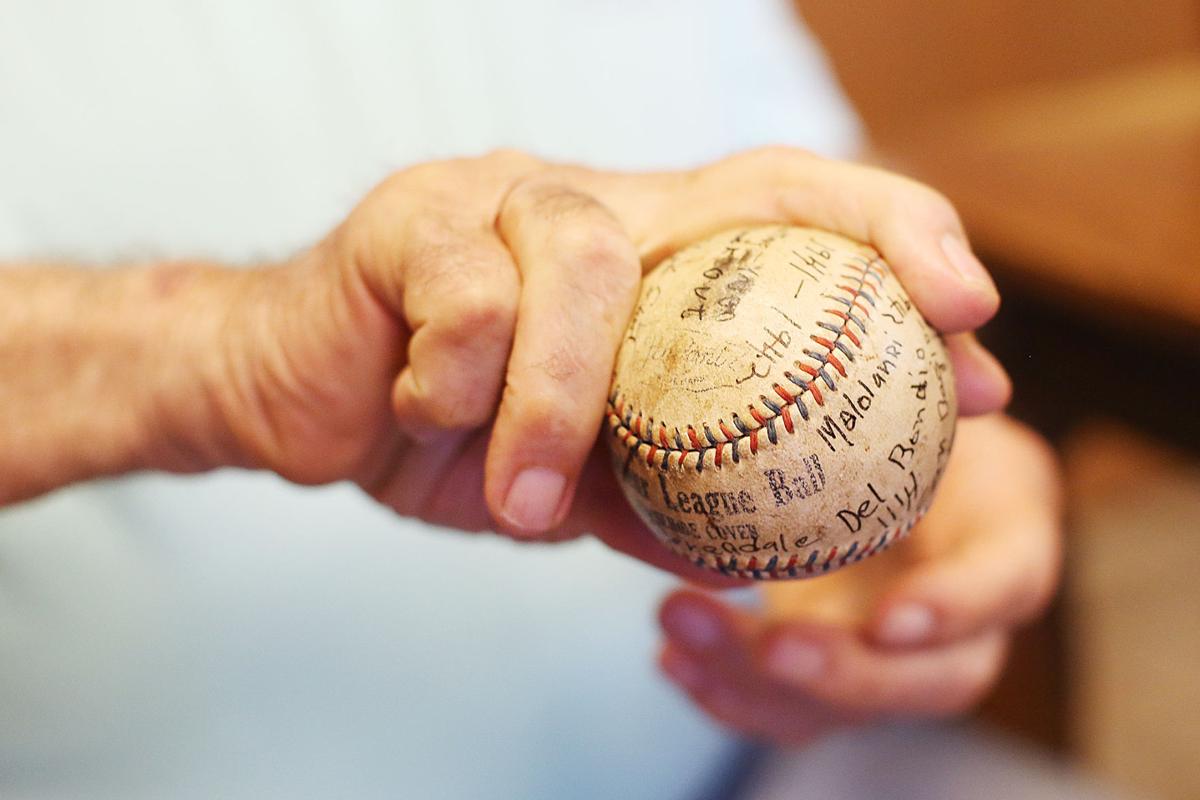 Henry "Chops" Ghiringhelli demonstrates the grip for one of his pitches with a signature covered ball from former teammates at his home in Rutherford on Friday. Ghiringhelli will be inducted into the St. Helena High School Athletic Hall of Fame. 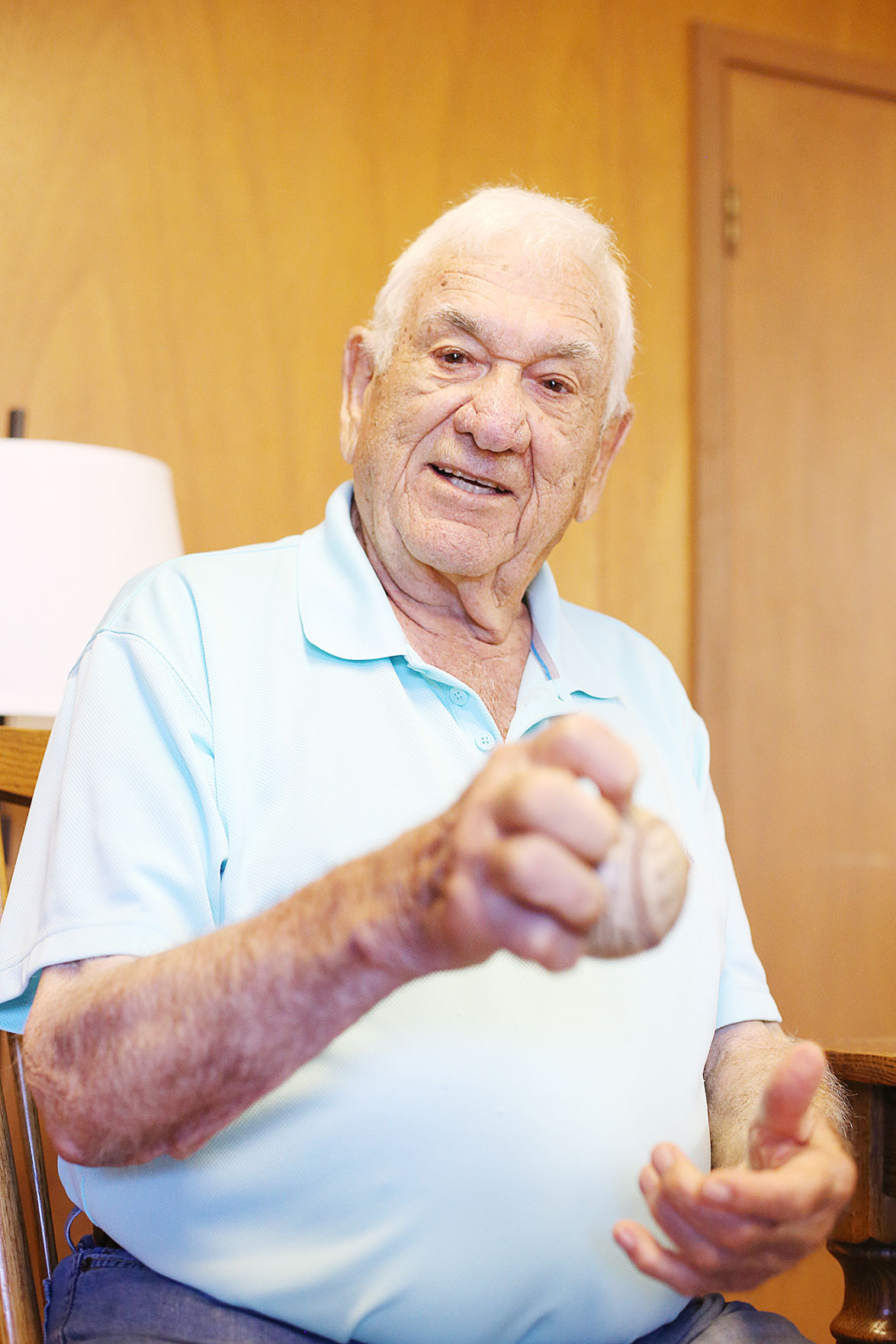 Henry "Chops" Ghiringhelli demonstrates the grip for his knuckleball at his home in Rutherford on Friday. Ghiringhelli will be inducted into the St. Helena High School Athletic Hall of Fame.

Henry "Chops" Ghiringhelli is seen at his kitchen table with baseballs signed by teamates and friends over the years, at his home in Rutherford on Friday. Ghiringhelli will be inducted into the St. Helena High School Athletic Hall of Fame.

Henry "Chops" Ghiringhelli demonstrates the grip for one of his pitches with a signature covered ball from former teammates at his home in Rutherford on Friday. Ghiringhelli will be inducted into the St. Helena High School Athletic Hall of Fame.

Henry "Chops" Ghiringhelli demonstrates the grip for his knuckleball at his home in Rutherford on Friday. Ghiringhelli will be inducted into the St. Helena High School Athletic Hall of Fame.

RUTHERFORD — It’s been 71 years since Henry “Chops” Ghiringhelli graduated from St. Helena High School. But he can remember those days – going to class, playing basketball and baseball for the Saints, spending time with friends – just like they were yesterday.

It was no big deal for Ghiringhelli to pitch just about every game. There were no pitch counts or limits on how many innings a pitcher could throw in a week. He wanted the ball and he wanted to challenge hitters with an assortment of pitches – drop ball, curveball, changeup, occasionally a knuckleball.

“I should have stuck with the knuckleball. I didn’t throw it that much because the catcher couldn’t hold on to it,” Ghiringhelli said from his home here.

He was a self-taught pitcher. He liked to work fast, to get in a rhythm and a flow.

“I started pitching when I was in grammar school,” said Ghiringhelli, a right-hander. “My brother (Etzio) was a pitcher. I just picked it up.”

To this day, Ghiringhelli’s name is all over the record books at St. Helena, which played Calistoga, Cloverdale, Geyserville, Tomales, Sonoma, Sebastopol and Petaluma during the 1940s. His career numbers as both a pitcher and hitter are indeed impressive, and rank among the top 10 in school history.

“I was always his biggest fan,” said Anita Ghiringhelli, Henry’s wife. “He was good – the best. You knew that he was going to win that game, because not only could he pitch, he could hit.

“The school was so small then, that it really meant a lot to us.”

It means the world to “Chops,” a 1944 graduate, that he was elected by a selection committee and will be entering the St. Helena High Athletic Hall of Fame. He will be inducted during a dinner and ceremony on Oct. 24 at Native Sons Hall in St. Helena.

“It’s an honor that I’m really proud of,” said Ghiringhelli. 88. “I thank the committee for electing me.”

Ghiringhelli played four years of basketball. He was on “C,” “B” and “A” teams for the Saints. As a guard, he averaged 4.6 points per game as a senior, 4.4 points as a junior and 3.6 points as a sophomore.

Baseball was his best sport. He pitched and played shortstop and in the outfield. He batted fourth in the order and was also a team captain.

He also ranks highly in other career categories:

“I loved to pitch,” said Ghiringhelli, who grew up a fan of the New York Yankees.

He struck out 16 batters in a game twice.

One of Ghiringhelli’s home runs was hit so far that it sailed over a tall oak tree on the St. Helena campus.

“Little things like that you remember, especially when we get older,” said Anita. “You can look back and it’s nice memories to have.”

Ghiringhelli was one of just 28 students in his graduating class.

“Chops” managed the St. Helena Braves, a former team in the Napa Valley Joe DiMaggio League, for 12 years. One of his star players was Bob Knepper, a Calistoga High graduate, who had a 15-year major league career, from 1976-1990. Knepper pitched for the San Francisco Giants and Houston Astros, was a two-time All-Star and the 1981 National League Comeback Player of the Year.

“Chops” was a hit with his players. They went all out for him in each game.

“The kids loved him,” said Anita. “They still call him ‘Coach’ when they see him and will give him a hug.”

Ghiringhelli also played for the St. Helena Blue Sox and the Rutherford town team. An area scout once invited Ghiringhelli to a tryout, but “Chops” turned the opportunity down, as he was preparing to leave and serve in the Army for two years.

Ghiringhelli wanted to play football for the Saints, but it required a parental consent signature. His mom, Rosa, and his older sister, Elma, would not allow “Chops” to play, fearing that he would get hurt.

“Coach (Jack) Rannels wanted to make a quarterback out of me,” said Ghiringhelli. “I could throw better than anybody, for distance and accuracy. I could also punt.”

His name his Henry Ghiringhelli, but his family and friends know him as “Chops.” It’s a nickname that was given to him when he was 5 years old. He is from Rutherford.

“My mom used to chase me around the yard with a broom. She used to say, ‘Choppy. Choppy.’ In Italian, choppy choppy means ‘I’m going to catch you.’”

It was not long after that when a neighbor friend gave Ghiringhelli the nickname.

He worked for the state Department of Fish and Game for 15 years out of its office in Yountville. He spent 20 years working for Beaulieu Vineyard as a maintenance foreman and worked eight years as a carpenter.

“Chops” plays bocce twice a week at Crane Park in St. Helena. He’s in a league on Tuesdays and Fridays.

“Chops” and Anita, who have been married for 64 years, have a son, Gianfranco Ghiringhelli, and a daughter, Cara Davies. They also have a granddaughter, Michaela Davies.