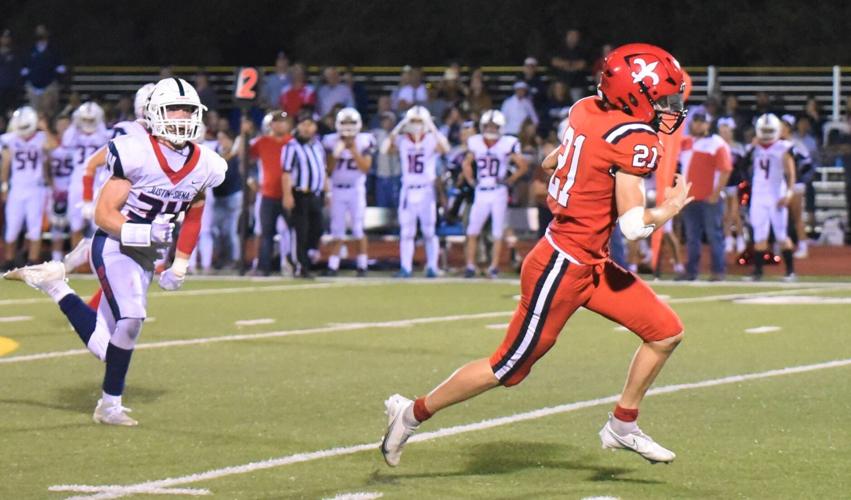 St. Helena junior linebacker Sam Raunegger (21) is pursued by Justin-Siena's Emrys Davies (34) after picking up a Braves fumble before scoring on the 95-yard return. 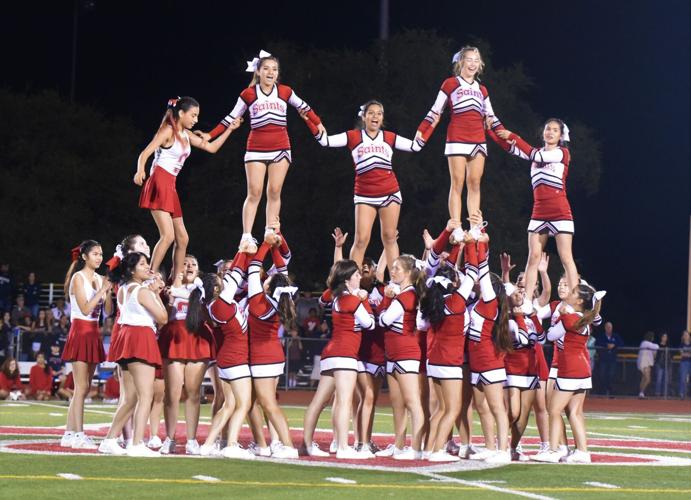 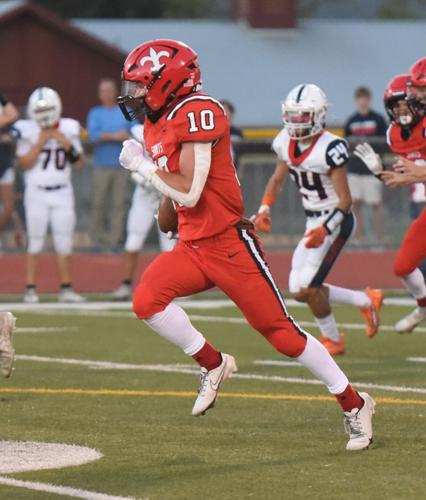 St. Helena senior Clayton Crean finds daylight on one of his 17 carries for 159 yards against Justin-Siena on Friday night. 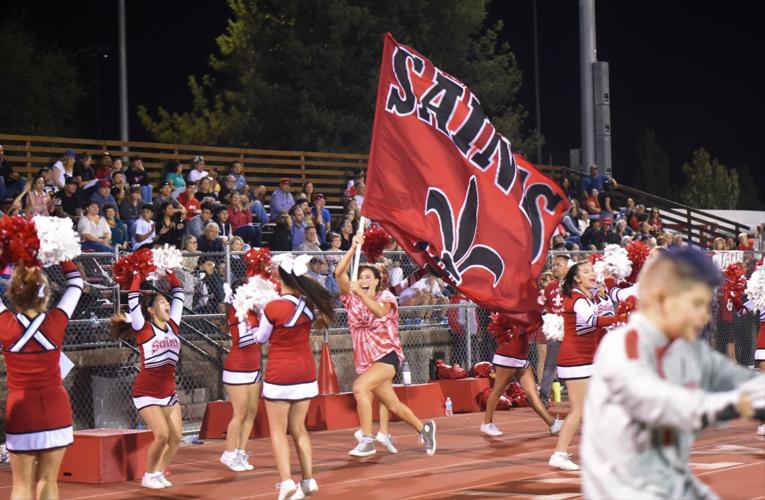 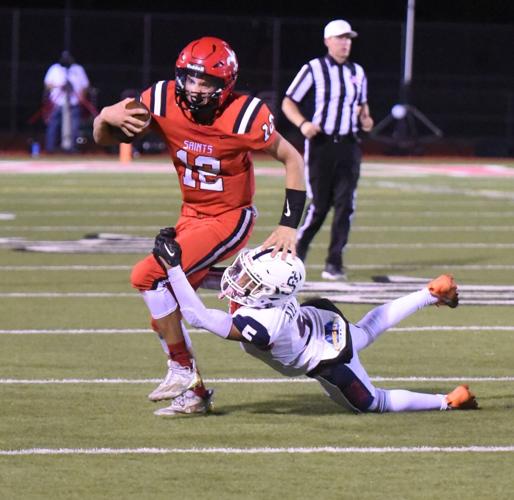 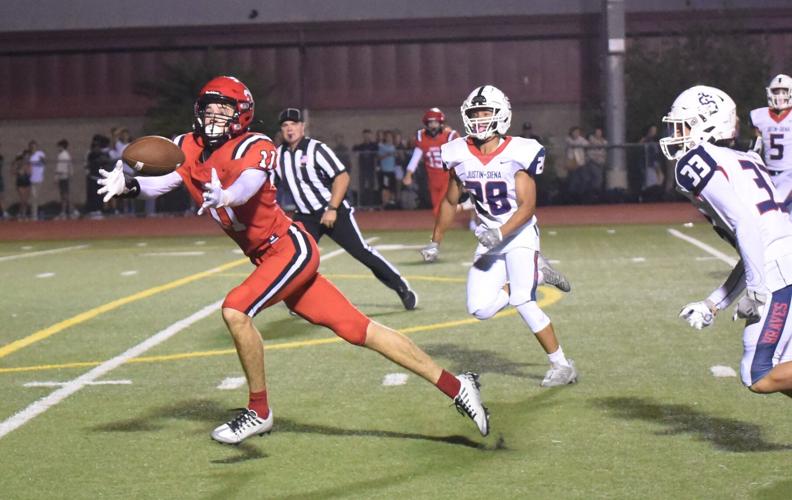 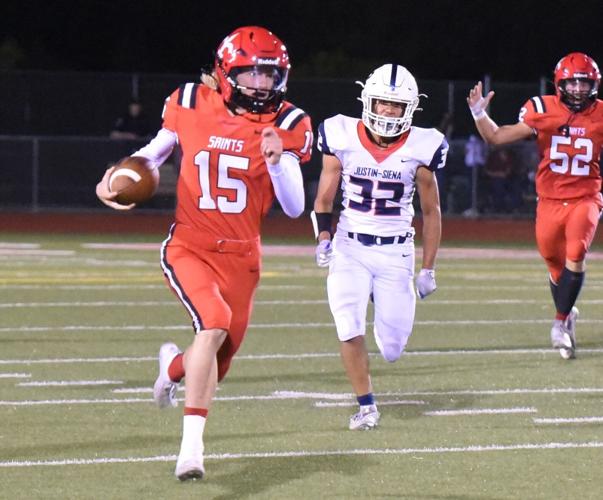 ST. HELENA — The St. Helena High football team might be small in roster size with 19 players, but the Saints showed in Friday's season-opening 28-0 shutout over the Justin-Siena Braves that they will apply bloody knuckles to any fight.

When the teams had previously met in 2001, in a game Justin won 47-0, no player on either roster was alive. St. Helena coaching staff members Ian MacMillan, Steve Shifflett, Rich Cotruvo and Steve Vargus were at Justin.

Twenty-one years later, the game came down to two sequences.

Justin trailed 7-0 with 23 seconds left in the first half, facing third and goal from the Saints' 4-yard line. Holden Beers dropped back to pass and the ball slipped out of his hands. St. Helena linebacker Sam Raunegger scooped up the fumble and motored 95 yards for a score, with Tom Woods following with one of his four extra points to put St. Helena up 14-0 at recess.

The Saints took the second-half kickoff and bled 8:55 off the clock. Keaton Smith capped the drive with a 4-yard run on fourth and goal, making it 21-0 Saints. At this point, they had the game in a stranglehold like a Boa constrictor.

St. Helena also had two touchdowns disallowed. Quarterback Wynton Meyer had what appeared to be a 75-yard touchdown run negated by an unintended whistle that nevertheless canceled the play. Raunegger had another fumble return touchdown, from 38 yards away, negated by an illegal block.

“We have some things to work on in terms of conditioning and knowing assignments and staying consistent, but it’s about how physically do we compete and do we let things go?” MacMillan said. “We preach to our kids the ability to overcome things. We had the inadvertent whistle and another touchdown called back because we blocked in the back. We let those things go, which was super impressive to me. We continued to battle and we just moved on to the next play.”

Led by the offensive line of Jadon Meyer, Jake Salling, Bryan Alfaro, Ethan Olivares, Andrew Velasco and tight end Kaedyn Buchanan, the Saints piled up 320 yards of total offense on 45 plays. Senior running back Clayton Crean led the attack with 17 carries for 159 yards and two touchdowns, including a 75-yarder on the Saints’ opening drive that put the team on strong footing.

“I’m going to run right at you and we’re going to see whose will prevails,” MacMillan said of his veer philosophy. “That’s the idea that we want to impose on them. We’re going to run through a brick wall. Are you going to apply it as well? We’re just going to keep coming at you. I learned that from Coach Varg and Coach Cotruvo. We’re going to attack and see if you can (handle) it for four quarters.”

Braves head coach Tyler Streblow was making his debut at the helm after taking the reins from Brandon LaRocco, who resigned in May after six seasons at the helm. Streblow ran the Houston split-back veer with aplomb as a quarterback, leading the Braves to the 2003 CIF North Coast Section Class A title when he was a senior.

“I knew this was going to be a really tough game because if you don’t execute your assignments against the veer, you’re going to be in trouble,” Streblow said. “We made a lot of mental mistakes early and then we got frustrated. St. Helena is very well-coached. They will run the veer over and over. When you don’t do your job, it will be a big play. I thought we fought hard. They’re not a big team, but they were better than us tonight.”

The Saints also put up their dukes defensively, limiting the Braves to 117 yards of total offense on 35 plays.

“I know he was super impressed,” MacMillan said of Vargus, St. Helena’s defensive coordinator. “I was happy with how well and how physical they played. They communicated well with one another and tackled very well.”

In the meantime, Streblow lamented that at times the Braves missed open receivers. Justin rotated sophomore Drew Sangiacomo and senior Beers at quarterback.

“Getting the timing right is hard,” Streblow said. “We had no spring ball because there was no coach at the time. We’re a work in progress in the passing game, which is our bread and butter. I like what our receivers did and how well we picked up Varg's blitz package because he is always bringing the heat. We also had a lot of self-inflicted wounds and way too many turnovers.

“I feel good about where we are going. Guys are getting open and getting to the right spots. They both have shown flashes. I’m not sure what we will do going forward. I just wanted to see what they could do. I know it’s not the greatest thing having two quarterbacks, but I thought they handled it well.”

Raunegger’s fumble recoveries were just two of the Saints’ defensive bright spots. Crean made two tackles for losses, with Raunegger, Salling, and Alfaro each adding one. Crean also had two impact tackles (gains between 1-3 yards), and Buchanan, Alfaro, and Velasco each had one. Meyer, Raunegger, and Alfaro each had a sack.

Defensively for Justin, Brandon Guiducci, Cameron Powell and Austin Dragoo each recovered a fumble. Emrys Davies had four impact tackles. Luke Giusto and Guiducci each had two, while Jack Sordi and Dominic Jiloa each had one.

Both teams are back in action this Friday, when the Saints host Winters and Justin entertains Fortuna.

“It’s never about a win or who we are playing,” MacMillan said. “It’s about us and trying to improve on mistakes and trying to get better. We focus on fighting through adversity.”

Added Streblow: “I think we took them a little lightly and those are lessons you have to learn. You have to prepare yourself. We did not prepare in the way you have to prepare to go against a championship-level varsity team. We made a lot of mental mistakes. The most significant improvement in football is always from Week 1 to Week 2.”

Behind the offensive line of Charlie Maldonado, Justin Sanchez, Jorge Carlos, Isaiah Williams and Axel Chino, the Saints churned out 343 yards — all rushing. Sam Beck paced the attack with 159 yards on 10 carries and a touchdown, and also returned the opening kickoff 90 yards for a touchdown. Quarterback Jhony Covarrubias compiled 99 yards on 10 carries with four touchdowns. Nick Woods added another 69 yards on six carries.

Defensively for the Saints, Beck had two tackles for losses, while Andrew Mendes, Chino and Williams each added one. Mendes also recovered a fumble. Eric Torres, Covarrubias and Woods each intercepted a pass. Chino and Williams combined on a sack. Gianluca had an impact tackle.

St. Helena’s defense limited the Braves to 94 yards of offense — 62 of which came from Thomas Malloy, who finished with 39 yards rushing on six carries and 23 yards on two receptions.

Defensively for Justin, Malloy, Riley Love and Maximillian Burke each had a tackle for a loss. Luke Ficeli had four impact tackles, while Colt Maloney, Giovanni Elshout-Welsh and Malloy each had one.

Katie Decker, a 2001 graduate who starred in volleyball and softball, will be one of five inductees into the St. Helena High School Athletic Hall of Fame on Saturday, Oct. 29 at Native Sons Hall.

A 95-yard fumble return for a touchdown by St. Helena's Sam Raunegger just before halftime kept visiting Justin-Siena from tying the score while propelling the Saints to a 28-0 victory in the first Vine Bowl matchup in 21 years Friday night.

St. Helena junior linebacker Sam Raunegger (21) is pursued by Justin-Siena's Emrys Davies (34) after picking up a Braves fumble before scoring on the 95-yard return.

St. Helena senior Clayton Crean finds daylight on one of his 17 carries for 159 yards against Justin-Siena on Friday night.