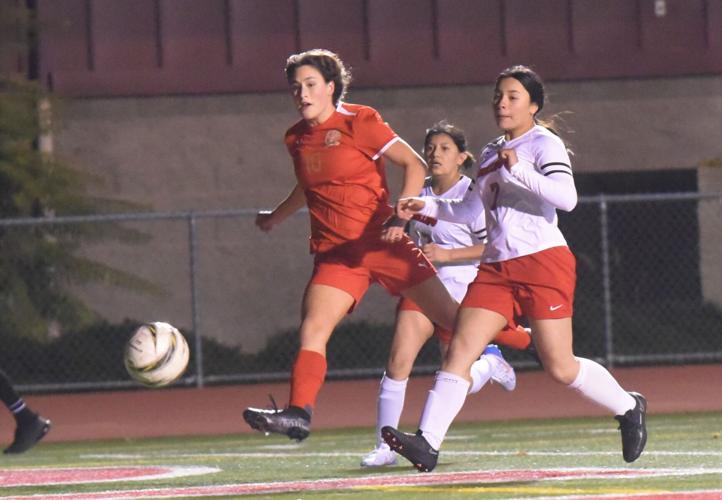 St. Helena's Eva Bowen, left, scores one of her 6 goals against visiting Vallejo on Nov. 16. 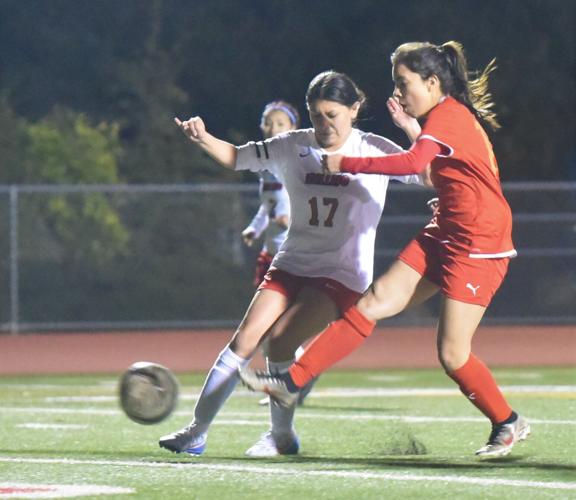 Any worries head coach Milton Gallegos may have had that his St. Helena High girls soccer team would be rusty after having to three months longer than before to start the season were allayed when the Saints routed visiting Vallejo 9-1 in their season opener on Nov. 16.

Girls and boys soccer were moved from the fall to the winter by the North Central League I this season, allowing the Saints to play Napa Valley teams other than Calistoga, which continued to play in the fall this year.

“For a first game in the winter, it was obviously a start that we were hoping for and wanting,” Gallegos said.

St. Helena led 6-1 at halftime after Emily Escobedo opened and close the scoring for the half and Eva Bowen exploded for four goals in between. Bowen added two more goals in the second half before sophomore Emily Glakeler — the only starter who wasn’t on the varsity last season — closed the scoring. Maddie Sullivan and Escobedo Fabela each had 2 assists, and Mabel Wilms and Andrea Rodriguez-Mendoza each had 1.

“We made an emphasis in practice that, now that we’re in winter possession ball, quality passing into space is more important than it ever was,” Gallegos said. “I definitely think we did that in this particular game. It was our first one and there’s stuff we can definitely improve, but overall it was well played by us. We had a lot of possession and excellent through balls.

We worked on our new attack.”

Gallegos was pleased with the play of senior center back Mabel Wilms and left back Glakeler, who “really helped us get our attack going.

“Our two center mids, Eva Bowen and Mia Hernandez, basically set the pace for the game. We distributed well throughout the entire game.”

(Rodriguez-Mendoza, junior mid) made great attacks down the wing and got a lot of crosses. For Maddie Sullivan, who is in her senior year, in the four seasons I’ve coached her, this was probably her best game all around— great passing, great vision, and Emily Escobedo and Valeria (Ortiz Becerra) were my two strikers.

“We ended up playing with only 11 due to illness and injury, but I think it was a great start to the season, great flow. I really liked what I saw.

The Saints had a game against St. Vincent scheduled for last Friday, but it was postponed. St. Helena’s next game is at home Tuesday against Bethel at 6 p.m.

2013: Sebastian Vettel matches record 13 wins in a Formula One season

Building chemistry between players and coaches was the theme of the night as new St. Helena varsity boys basketball head coach Giules Particel…

Monday, Nov. 14, was to be the debut of former St. Helena High junior varsity girls basketball coach Angela Sommer at the varsity helm. Sommer couldn’t make it, however, because she was quarantining with a case of COVID-19. But with new JV head coach Pavin Argyle filling in, the Saints dropped a 38-29 decision to visiting Elsie Allen of Santa Rosa.

St. Helena native Rico Abreu is forsaking the limitations of racing with any individual sanctioning body, choosing instead to create his own schedule, hopscotching among several series while criss-crossing the country from his team's Indianapolis headquarters. He said it forces him to stay on top of his game.

The St. Helena High football team, needing to win its North Central League finale Friday night in Middletown to have a chance at the playoffs,…

St. Helena's Eva Bowen, left, scores one of her 6 goals against visiting Vallejo on Nov. 16.