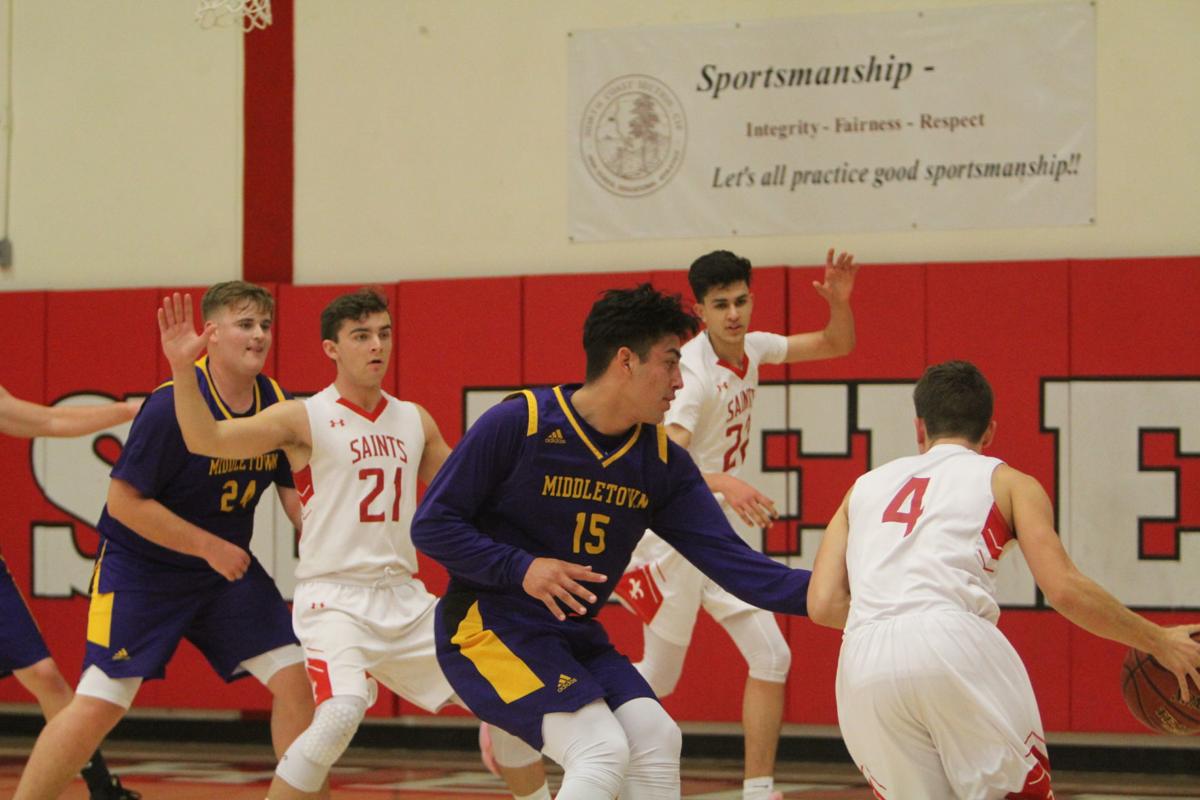 St. Helena senior Caleb Jeske (21) posts up as junior Fawad Muhammad (22) cuts baseline while senior Collin Darrall drives to the hole during the Saints 61-46 loss to Middletown on Tuesday. 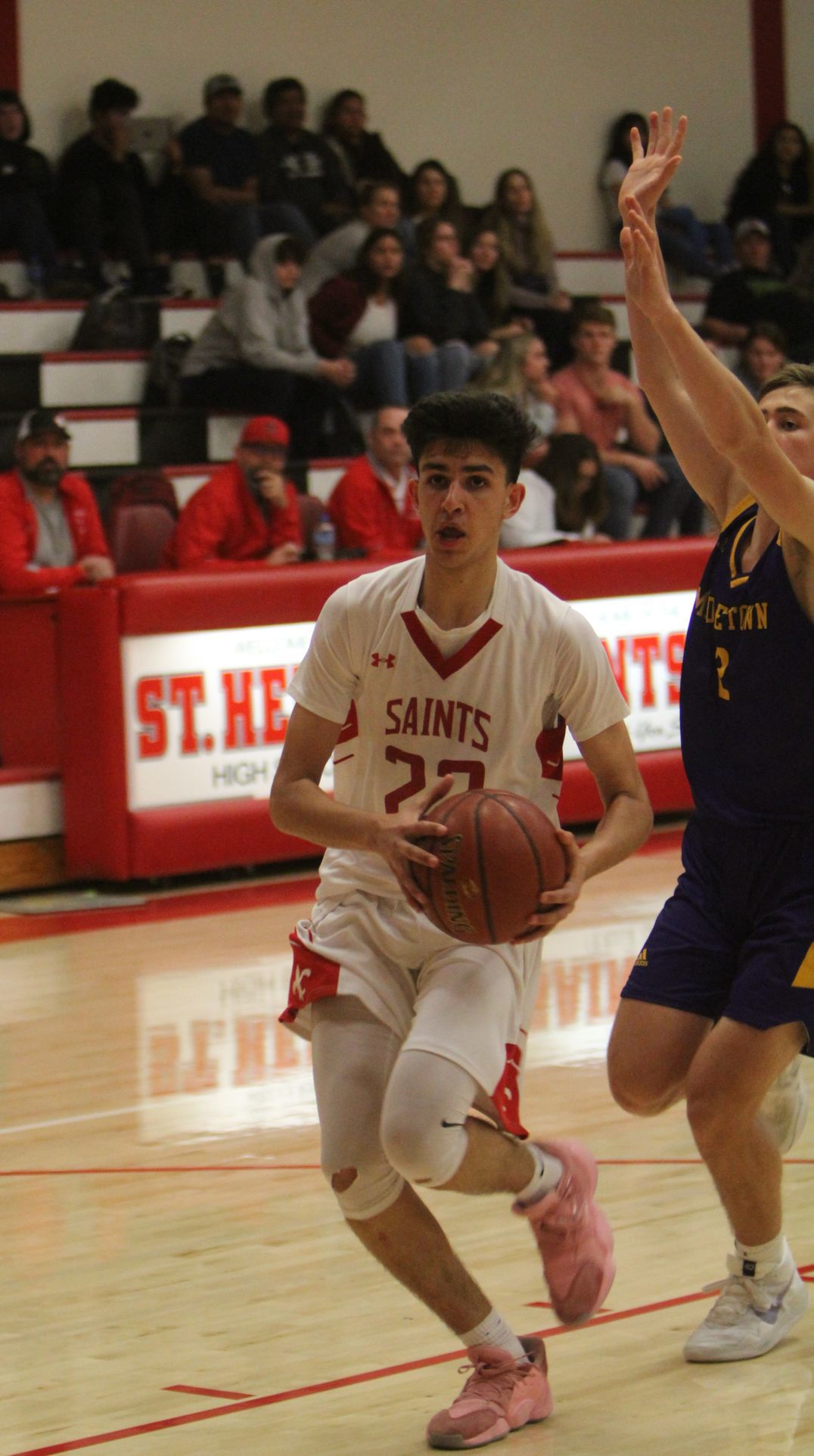 St. Helena junior Fawad Muhammad drives for a layup during the Saints 61-46 loss to Middletown on Tuesday. 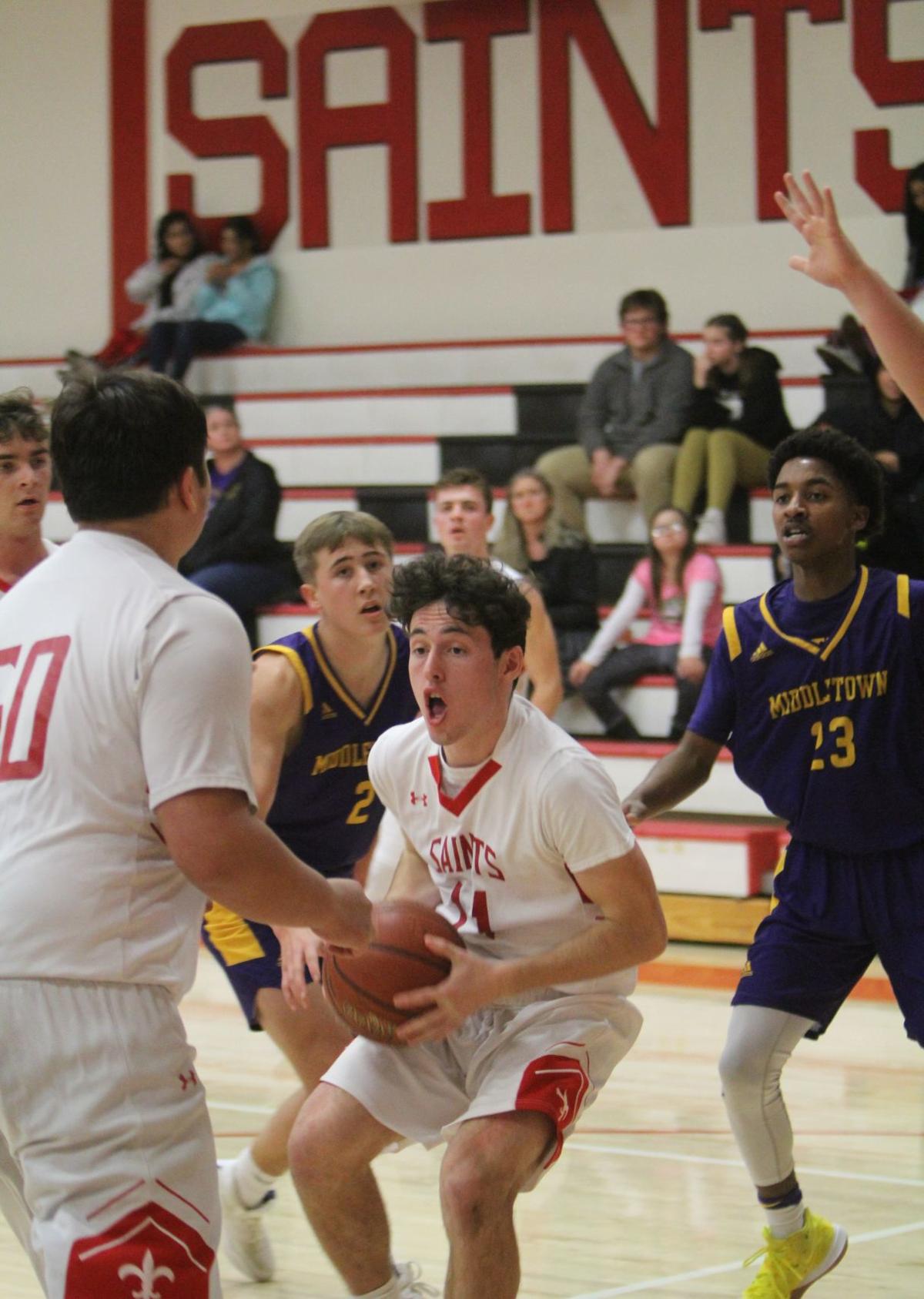 St. Helena senior Jake Mendes looks to dump the ball off to a teammate as he drives in the paint during the Saints 61-46 loss to Middletown on Tuesday.

St. Helena senior Caleb Jeske (21) posts up as junior Fawad Muhammad (22) cuts baseline while senior Collin Darrall drives to the hole during the Saints 61-46 loss to Middletown on Tuesday.

St. Helena junior Fawad Muhammad drives for a layup during the Saints 61-46 loss to Middletown on Tuesday.

St. Helena senior Jake Mendes looks to dump the ball off to a teammate as he drives in the paint during the Saints 61-46 loss to Middletown on Tuesday.

The St. Helena High boys basketball team may have the toughest opening two weeks of any team in the North Central League I.

The Saints’ first four opponents – Clear Lake, Middletown, Cloverdale and Fort Bragg – entered the second week of league play on Tuesday having each won their league opener and with combined records of 35-12.

St. Helena’s foe on Tuesday, Middletown, had the worst record among that group at 7-4. Still, the Mustangs have a bevy of talent, headlined by the high-flying Cervantes brothers and big man/sharpshooter Jimmy Rockwell after their all-league seasons a year ago.

The trio once again led the Mustangs to a win at St. Helena on Tuesday, 61-46, dropping the hosts to 6-5 overall and 0-2 in league play. Andres and Sammy Cervantes scored 19 and 17 points, respectively, while Rockwell added 17 with five 3-pointers. Rockwell hit a three in every quarter, including two in the second as part of a 10-0 run the Mustangs used to pull away heading into halftime.

“The kids competed well,” St. Helena head coach Jim Gamble said. “They played hard the entire game and we were getting good looks. The shots just weren’t going down for us. It was nice to have all 12 players – it was the first time we’ve had all 12 in a long time. We’ve been hit hard by illness, injuries and vacations. So it was nice to have everyone back, but Middletown is a tough team and we just didn’t have answer for the Cervantes twins. They really hurt us inside.”

“He was on fire,” Gamble said.

It was also the eighth straight win for the Mustangs over the Saints, whose last win in the rivalry came back in 2015

Middletown (8-4, 2-0) jumped out to an early lead, but St. Helena found its groove in the second quarter and cut the double-digit deficit to 27-19 with 1:30 left in the half. Then, the Mustangs got hot. They rattled off 10 straight points to take a commanding 37-19 lead into the break.

That lead grew to 20 at the start of the second half. Even though the Saints outscored their foes 27-24 over the final two quarters, the lowest they got the deficit to was 12 late in the fourth quarter. The ground lost in the first half was simply too great to make up in the second.

“That was the difference in the game,” Gamble said of the late run in the second quarter.

The schedule doesn’t get any easier over the next week. The Saints will travel to Fort Bragg (9-3, 1-0) on Friday before hosting Cloverdale (10-2, 2-0) next Tuesday.

“Our goal is to make the playoffs and we know we need to win six more games so, yeah, this is a tough stretch to open league. But we’ve got to compete in every single game,” Jim Gamble said. “We’ll get battle-tested here early, but we’ve just got to stay focused on getting better every day.”

The Saints fell to 6-8 on the season on Tuesday when a close game got away from them late.

Trailing only 32-26 after the third, the Saints went cold in the fourth. Middletown outscored the hosts 23-4 over the final eight minutes to seal the win.

The St. Helena boys varsity basketball team finished out its non-league schedule with a 68-43 win at Berean Christian on Monday.