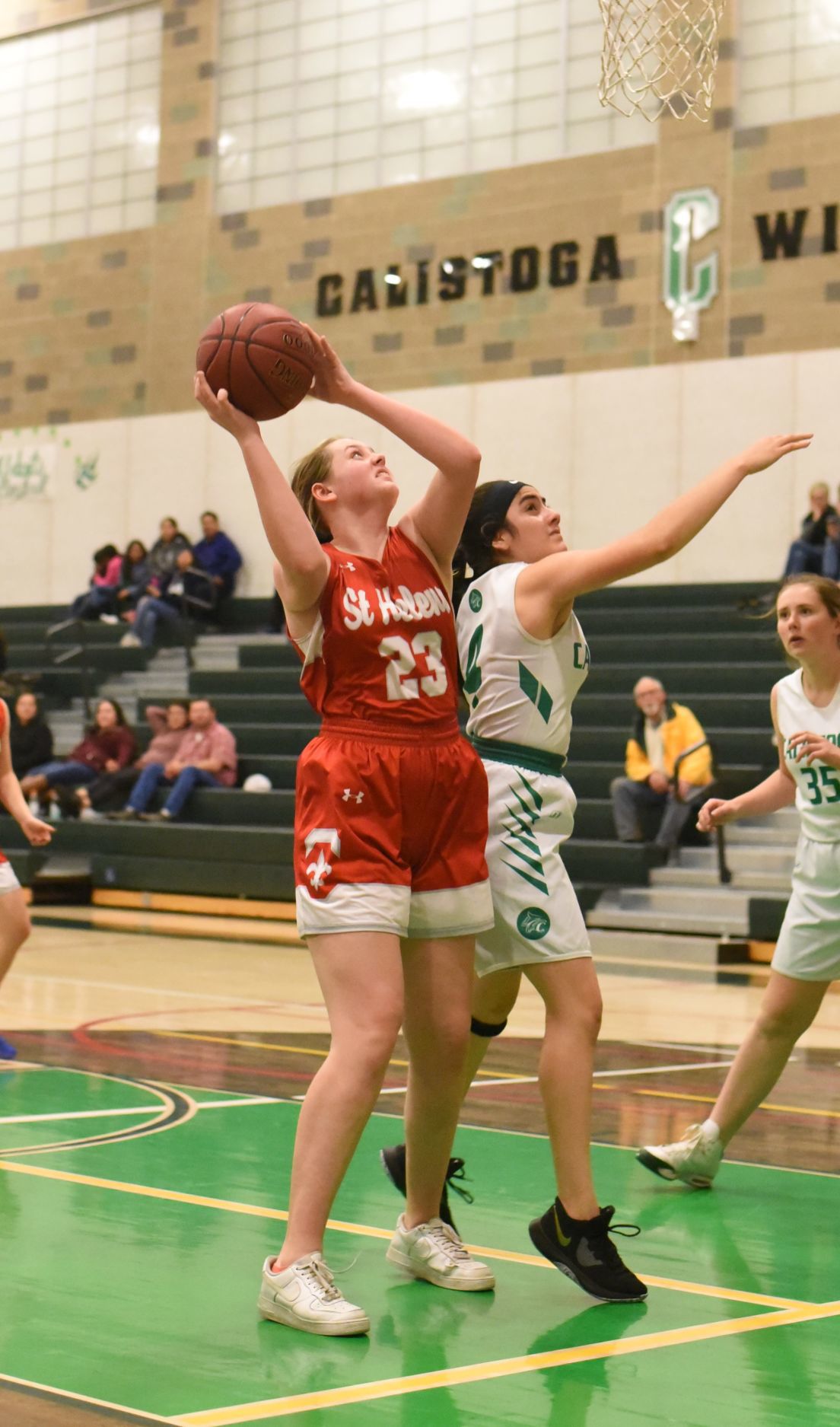 St. Helena freshman Peyton Myers goes up for a layup during the Saints game against Calistoga in the Gene Duffy Holiday Classic. 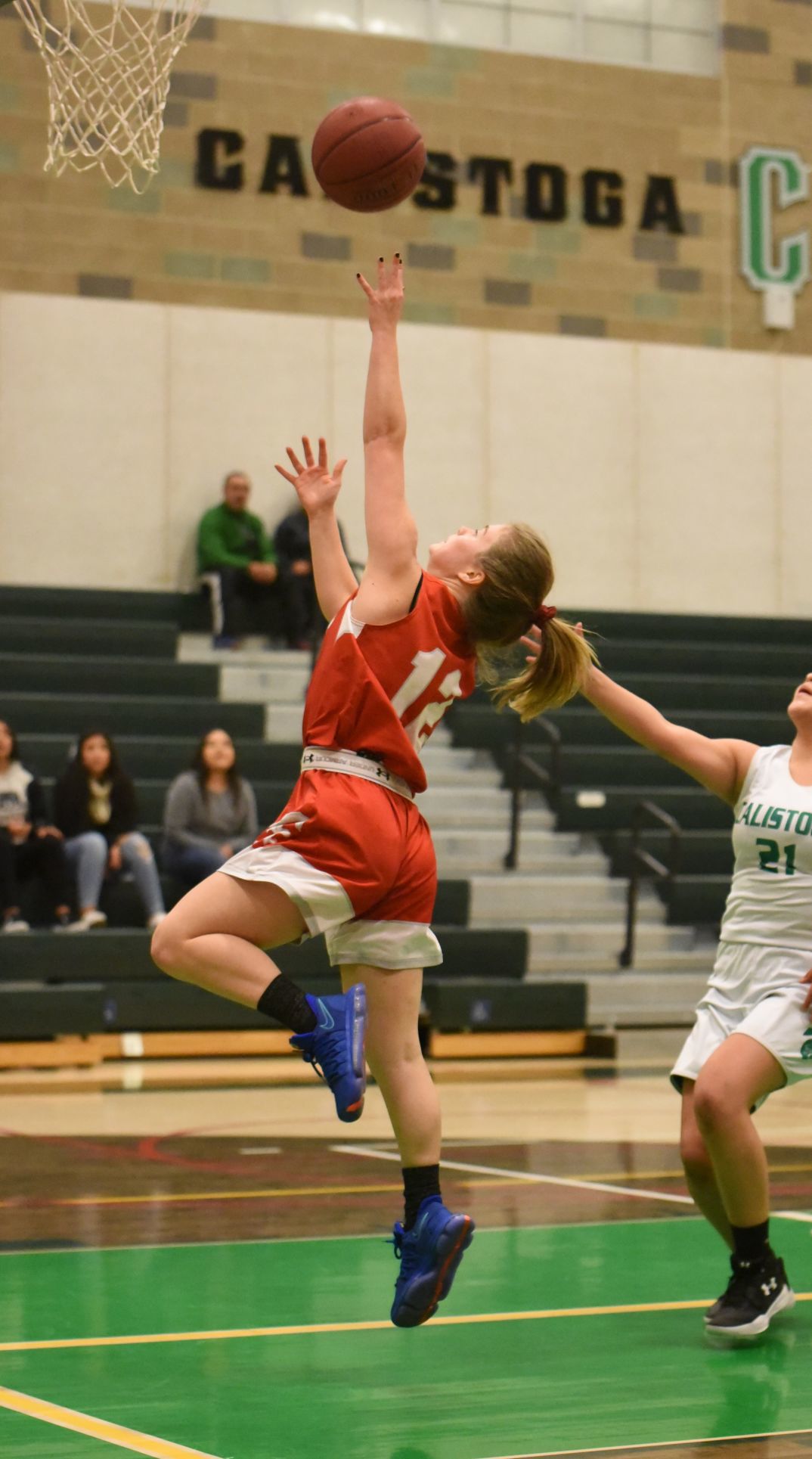 St. Helena junior Daphne Steeles puts up a layup during the Saints game against Calistoga during the Gene Duffy Holiday Classic.

St. Helena freshman Peyton Myers goes up for a layup during the Saints game against Calistoga in the Gene Duffy Holiday Classic.

St. Helena junior Daphne Steeles puts up a layup during the Saints game against Calistoga during the Gene Duffy Holiday Classic.

All five were losses, and none were by a particularly close margin.

But since that two-week stretch, things have begun to turn for the better for the 2019-20 Saints.

They got off the schneid over the weekend, picking up their first win of the year over Summerfield Waldorf, 33-19, on Friday at Calistoga’s Gene Duffy Holiday Classic. After they dropped their final game of the tournament, a hard-fought, 38-30 loss to Technology, the Saints got back on track on Tuesday night when they hosted Winters.

Led by junior Daphne Steele’s 21 points, including two 3-pointers, the Saints outscored the Warriors in every quarter for a convincing 44-27 win that moved them to 2-7 on the season.

Second-year head coach Darol Smith, 85, expected better results to come even after his team’s rough start. This year’s squad is young and has fewer players than last season, just eight down from 10 a year ago. But, Smith figured, that means there will be no shortage of playing time and ample time for his players to learn and develop on the fly.

Cupp is currently sidelined with an injury, so the Saints beat Winters with only seven healthy players on Tuesday. It was a full team effort, with Vega adding 10 points, 2 rebounds, 2 steals and a block, Long chipping in 6 points, 5 rebounds, 4 assists and 5 steals, Avina finishing with 5 points, 4 rebounds, an assist and a steal, Tobon ending with 2 points, 3 rebounds and 3 steals, and Myers and Almanza each grabbing 4 rebounds.

Tuesday’s 44 points were also a season-high for the Saints. Smith recognized early that one of his team’s shortcomings would be putting the ball in the basket. The Saints didn’t have much trouble making shots in practice, he said, but for whatever reason they simply would not drop when it was game time.

That changed Tuesday night, giving credence to Smith’s theory that bounces just haven’t quite gone their way yet this year.

“We probably could have won a couple,” Smith said Tuesday morning of some of his team’s earlier lopsided losses. “In one game, our best shooter went 1 for 11. But we work on it, and they’re conscious of it and want to improve on it.”

Smith said prior to their game against Winters that he’s seen steady progress from his team, but added the Saints will still face their fair share of challenges.

“We’re very young and we don’t have a lot of numbers at the varsity level,” he said.

As they progress through their nonleague schedule, Smith simply wants to see them play their best and not get discouraged no matter the result.

“Well, I just want each time we play to say after the game that we played as good as we could,” he said. “If that gives us a win, great, but I still consider it a productive game if we can play as good as we can.”

Smith is making his return to the sidelines this year after having his first season at the helm cut short late in the schedule due to a knee injury that required surgery.

There are bright spots within the program, Smith added, like the potential of Myers, a 6-foot-2 freshman.

Another positive is the play of coach Jessica McCornack’s junior varsity team, which has already picked up a pair of wins.

“They’ve responded well and they have good athletes, and I have two of the good athletes on varsity,” Smith said. “So that gives them about eight or nine good athletes for the future, and they’re always practicing hard. Jessica has done a great job. She has their respect and they’ve learned a lot. They’ve improved in the month we’ve been here immensely already.”

The varsity squad will look to keep its recent strong performances coming this weekend when it hosts the St. Helena Girls Invitational Tournament, running Thursday through Saturday at St. Helena High.

The pool is down to six teams this year, so the tournament will be played in a round-robin format. Aside from the hosts, St. Vincent, Calistoga, Rio Vista, Roseland University Prep and San Rafael will be participating.

The Saints will play two games on Thursday, the first against St. Vincent at 4 p.m. and the second against San Rafael at 7 p.m. They won’t play any games on Friday but will be back in action on Saturday.