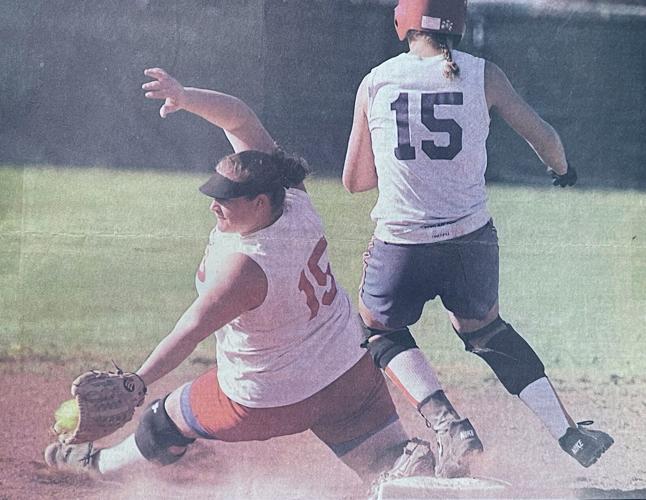 Katie Decker, left, stretches to catch a low throw while playing softball for St. Helena in 2001. 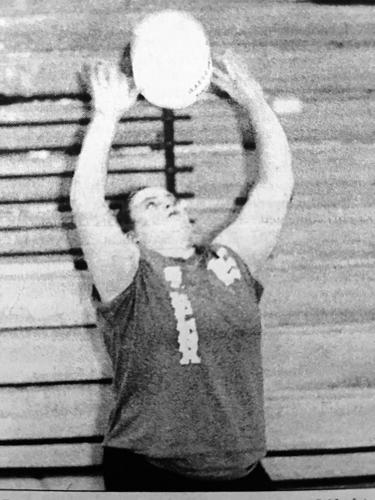 Katie Decker, shown setting in volleyball for St. Helena in 2000, is still the school’s all-time leader with 2,541 career assists and 61 assists in a single match. 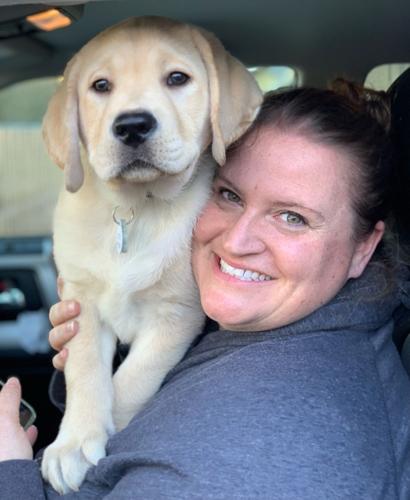 Katie Decker, one of this year's St. Helena High School Athletic Hall of Fame inductees, poses in a recent photo with her dog. 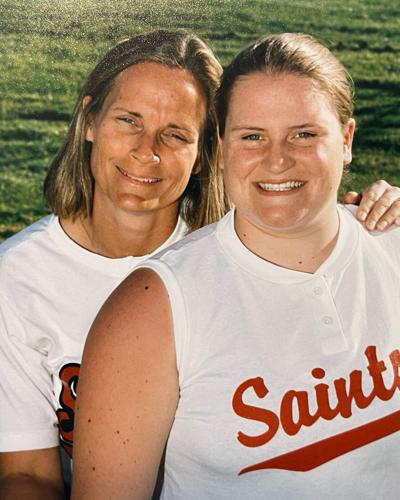 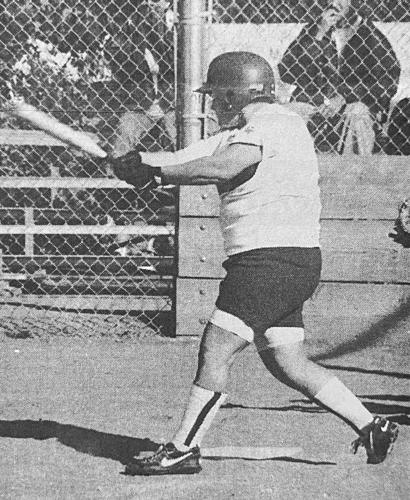 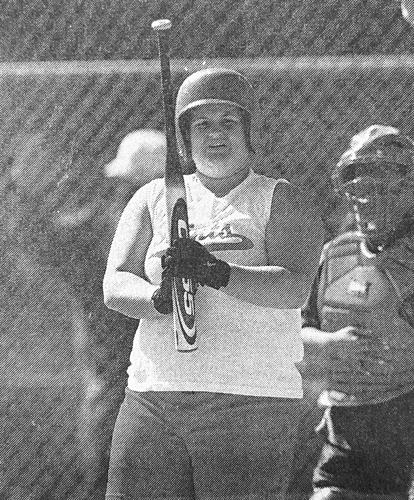 Katie Decker gets ready to bat for her St. Helena High softball team in 2001. 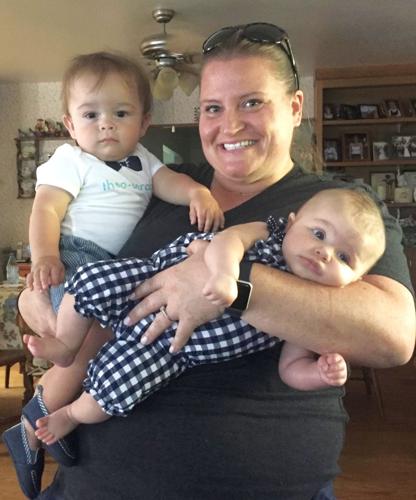 Katie Decker, one of this year's St. Helena High School Athletic Hall of Fame inductees, poses in a recent photo with members of her extended family.

Katie Decker’s blended family atmosphere turned sports into a journey that was love at first sight.

The 2001 graduate will be one of five inductees into the St. Helena High School Athletic Hall of Fame on Saturday, Oct. 29 at the Native Sons Hall.

“It’s a call that you always hope to get but you never expect,” Decker said of Hall of Fame selection. “You look back on your high school years and have really fond memories. I really didn’t see it coming, but it’s a complete honor that not a lot of people get. I was kind of shocked. It was like coming full circle to get the call because once you leave high school you don’t talk about it much anymore.”

Decker, who works as an appraiser for the County of Napa and lives in Calistoga, comes from a family that is a mixture of Deckers and Pasquariellos. She has seven siblings — Emily, Missy, Madelyn (also known as Dolly) and James (also known as Chip) on the Decker side and Cassie, Alexis and Gianna on the Pasquariello side. Emily Decker, who played soccer and softball, was one year behind Katie. Alexis Pasquariello graduated in Katie’s class, Missy Decker graduated two years later, and Madelyn graduated in 2015.

Katie Decker starred as a volleyball and softball player for the Saints, and was a two-time All-Napa County selection in both sports. She was all-league twice in volleyball, receiving All-Superior California Athletic League Honorable Mention and All-North Central League I First Team honors. She also received All-NCL I Honorable Mention in softball.

In volleyball, Decker is still the school’s all-time leader for career assists (2,541) and single-match assists (61). In softball, she is still tied with LeeAnne Crowe (1985) for most doubles in a single season with nine. She is in the top five among season and career leaders in 10 categories in both softball and volleyball.

“Coming from St. Helena, sports was what you had,” Decker said. “I remember being a Jaguar in T-ball. Everything was co-ed because we did not have girls softball teams. Girls athletics was still in the developing stages. I remember coming into my first year of St. Helena Little League rolling out girls softball teams, being a Cub. It started way back and felt so great to be part of those pioneers of being the first softball team in Little League and developing that program.”

Her mother, Rianne Pasquariello, was one of the first coaches to see SHLL softball through to the Senior League.

“It was competitive and fun,” Katie Decker said. “It set the tone for what the expectation was and it continued to RLS (Robert Louis Stevenson Middle School) and later St. Helena High School. You learn your competitiveness but you also learn to be a team player and be respectful of the game.

“Everyone says ‘it doesn’t matter if you win or lose, it’s how you play the game.’ But for me, you wanted to have passion and play hard. You played against the kids you went to school with. The competitiveness was also friendly, but you hit the field and everyone wanted to win. There were the rivals of the Cubs versus the Twins.”

Decker also tried her hand at soccer, basketball, and track and field before ultimately zeroing in on volleyball and softball. She recalled playing whichever sport the City of St. Helena Recreation Department offered.

“It was the love of the sport,” she said. “I tried basketball my freshman year, but it wasn’t fun and I knew it wasn’t the sport for me. I rolled my ankle both ways. I ended up sticking with volleyball and softball because they were the sports I excelled at and loved. I had a passion for them and the coaches were phenomenal.”

Decker played on volleyball teams that were annual participants in the Sac-Joaquin Section and North Coast Section. In her senior year, the Saints reached the postseason in softball for the first time in school history under then-head coach Bob Kyle. St. Helena would not reach the postseason again until 2022, when under current head coach and athletic director Brandon Farrell guided the Saints to the NCS Division 5 title game and Northern California Regional playoffs.

Decker was also part of a transition in the athletic program. In the SCAL, the Saints were frequently swimming upstream against the likes of Justin-Siena, Vanden, Dixon, St. Patrick-St. Vincent and John Swett, all of which had bigger enrollments. When the SCAL disbanded, the Saints returned to the NCL I for the first time since 1985. The league features schools with enrollments more similar to St. Helena’s.

“Playoffs were something you strived for the entire season, so to get there was the cherry on top,” Decker said. “We always knew we were a small town and were going against teams like Ripon. My most memorable games were against Justin-Siena for both softball and volleyball. It went both ways. The entire school would come to the gym.

“To beat some of those bigger teams was a big deal — like Dixon, which always had super tall, athletic girls. Those were memorable wins. For softball, I remember driving in the winning run in the seventh inning and I still have the winning ball. When you go to the playoffs you don’t play these teams very often. You didn’t know what to expect and you didn’t have the rivalry like you did with Justin and Dixon. I don’t remember having any rivals in the NCL I because everyone hated us. We didn’t know them and they had an established time in the league. It didn’t help when we would roll up in Evans buses and we’d have matching uniforms and matching cleats.”

“Herschel would work with me for hours on making my setting as good as we could get it,” Decker said. “As a setter, you run the game. You’re like the quarterback. He took the time and effort.”

Besides the camaraderie sports built within her family, Decker recalled a sisterhood of sorts forming with those outside of her household.

“Everyone was a giant family and looked out for each other on game day,” Decker said. “Everyone went to school dressed up, wearing their away uniform. Everyone had each other’s backs as far as making sure we get to school on time. You don’t want to show up 10 minutes late and not be able to play. Everyone had a positive outlook, whether you were a starter or not. We were equals.

“If someone had a tough game or practice when you got on the field, that was a way to put your personal life behind you. It gave you a fresh outlook. Everyone wanted to win, but we were a team. Together, everyone achieves more. You may have your pecking order but as a captain, you wanted to make everyone feel like they were important. The mantras I have in my professional life now were formed in high school, experiencing the idea of everyone having each other’s back.”

After high school, Decker’s educational path took a circuitous route. She started at Sonoma State as a freshman with her major undeclared, before transferring to Napa Valley College for two years. She then transferred to UC Davis, where she earned a bachelor’s degree in animal science, before achieving a master’s degree in business through the University of Phoenix online program.

Decker said the lineage between life lessons and sports is something she sees on a daily basis.

“I deal with a lot of angry people and in sports you are dealing with another team who are not angry but they are there to beat you,” Decker said. “To have that competitive edge when you are not necessarily trying to win anything helps as a professional.

“That personality dates back to when you played sports. It’s not about being the best. It’s about being fair and honest. Part of a team is being honest and loyal to each other. It’s not about who is the MVP or weakest link, it’s about succeeding as a team. Much of that in my professional life is accurate. We work individually but we work as a team. When you see one person having a tough time with a customer, you lend a helping hand.”

On induction night, a cocktail hour is scheduled at 5:30 p.m., with dinner at 6:30 p.m. followed by the induction ceremony. Cost is $70 per person. Checks can be made payable to “SHHS Hall of Fame” and sent to P.O. Box 670, St. Helena, CA 94574, with name, telephone number, email address, and the names of all who are on the reservation. Tables of 8 are available and recommended.

Four of several players from St. Helena High’s 1982 and 1984 volleyball state champions who will be recognized between the current Saints’ junior varsity and varsity matches against Clear Lake on Thursday night recall what it took to reach three straight state tournaments.

Katie Decker, left, stretches to catch a low throw while playing softball for St. Helena in 2001.

Katie Decker, shown setting in volleyball for St. Helena in 2000, is still the school’s all-time leader with 2,541 career assists and 61 assists in a single match.

Katie Decker, one of this year's St. Helena High School Athletic Hall of Fame inductees, poses in a recent photo with her dog.

Katie Decker gets ready to bat for her St. Helena High softball team in 2001.

Katie Decker, one of this year's St. Helena High School Athletic Hall of Fame inductees, poses in a recent photo with members of her extended family.