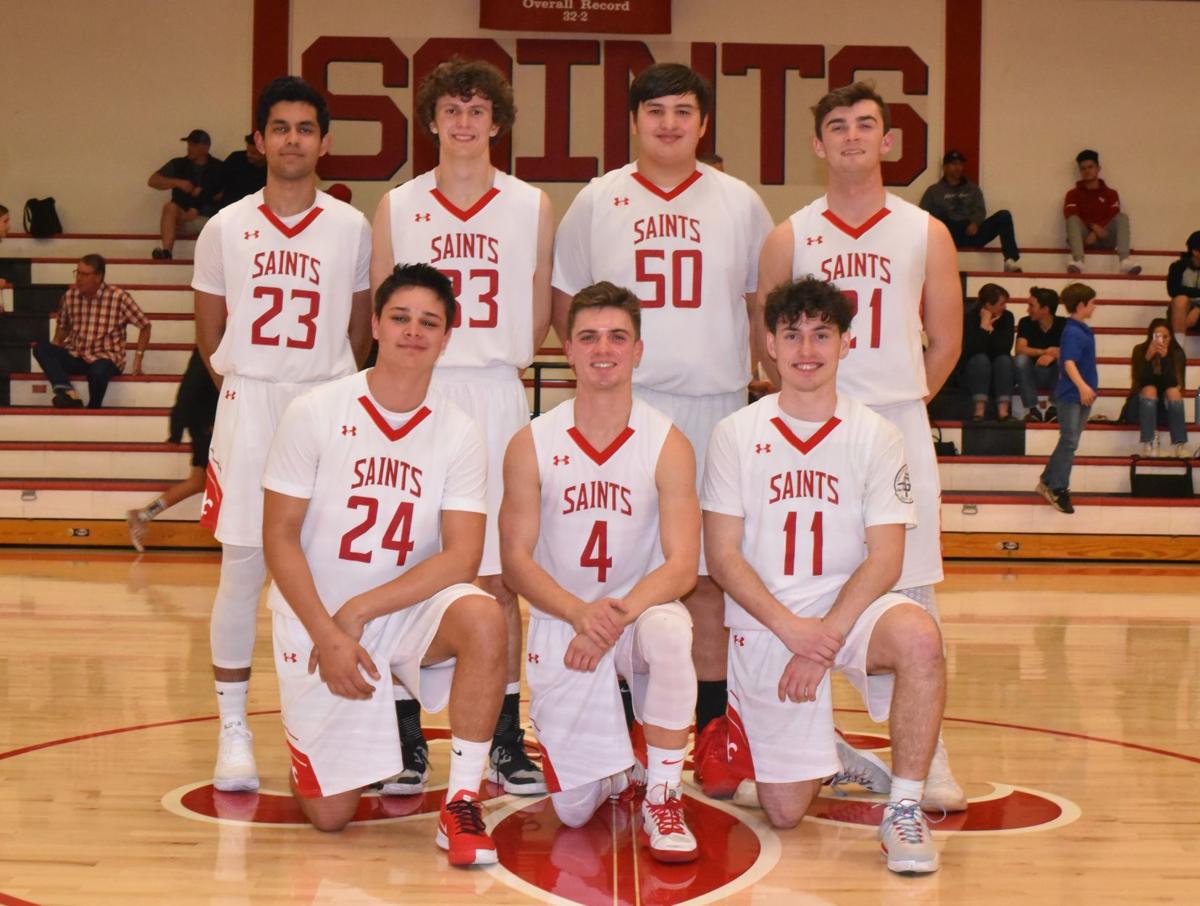 The seniors of the 2019-20 St. Helena boys basketball team. Pictured on the top row, from left to right, are Jawad Muhammad, Jonathan Gamble, Mason Marquez and Caleb Jeske. On the bottom row are Caleb Granados, Collin Darrall and Jake Mendes. 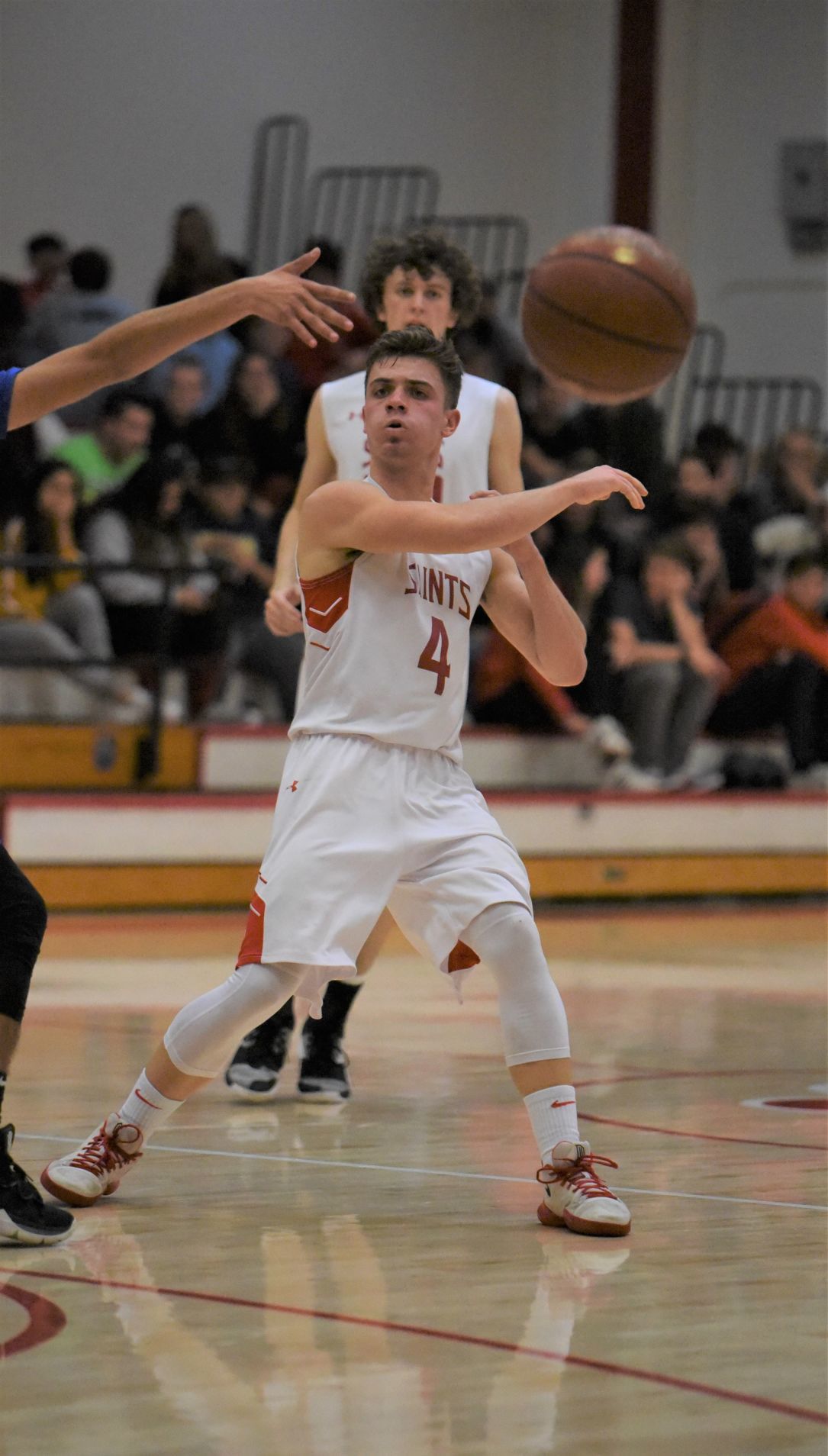 St. Helena's Collin Darrall whips a pass to a teammate against the Trojans on Tuesday. 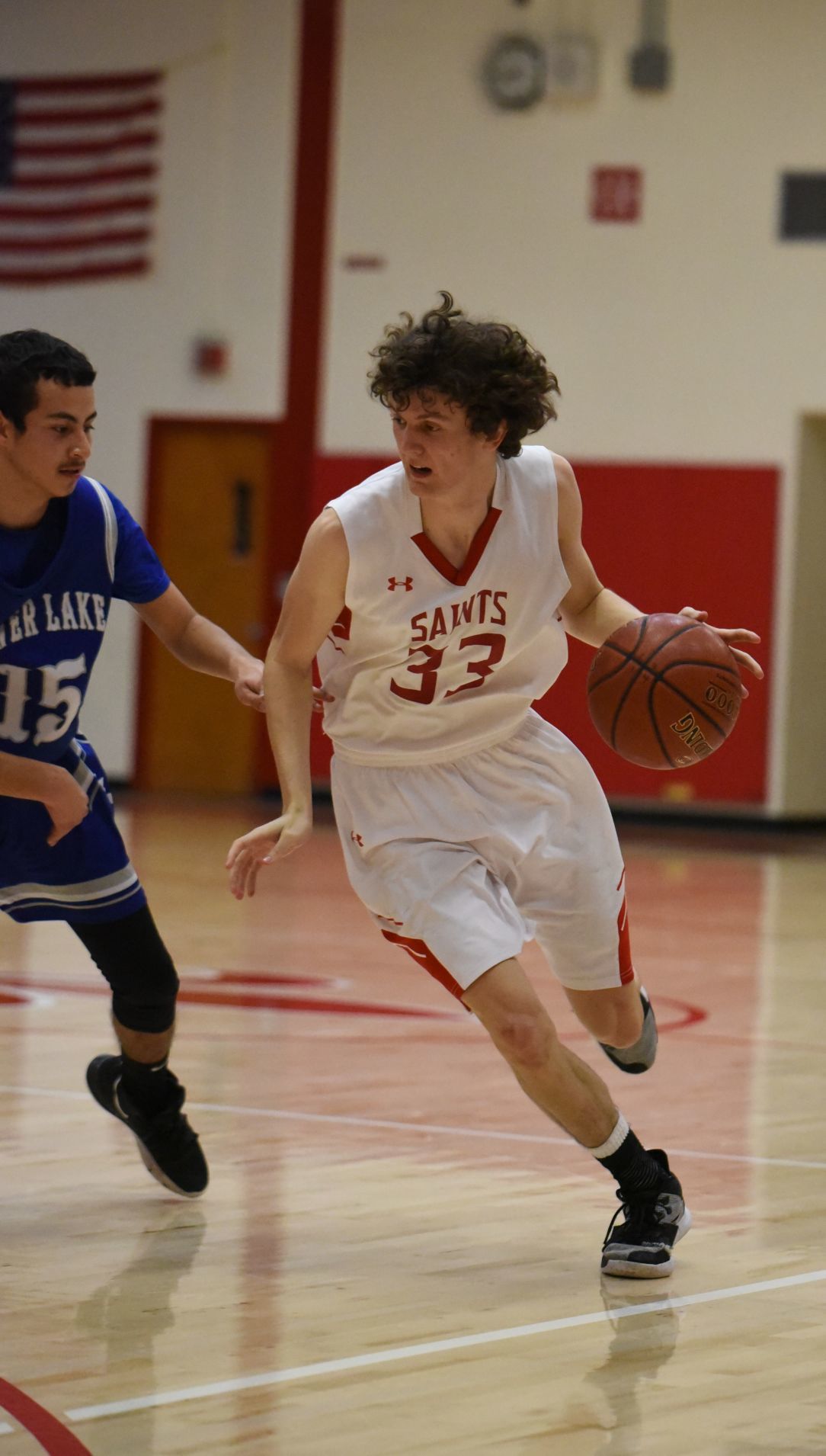 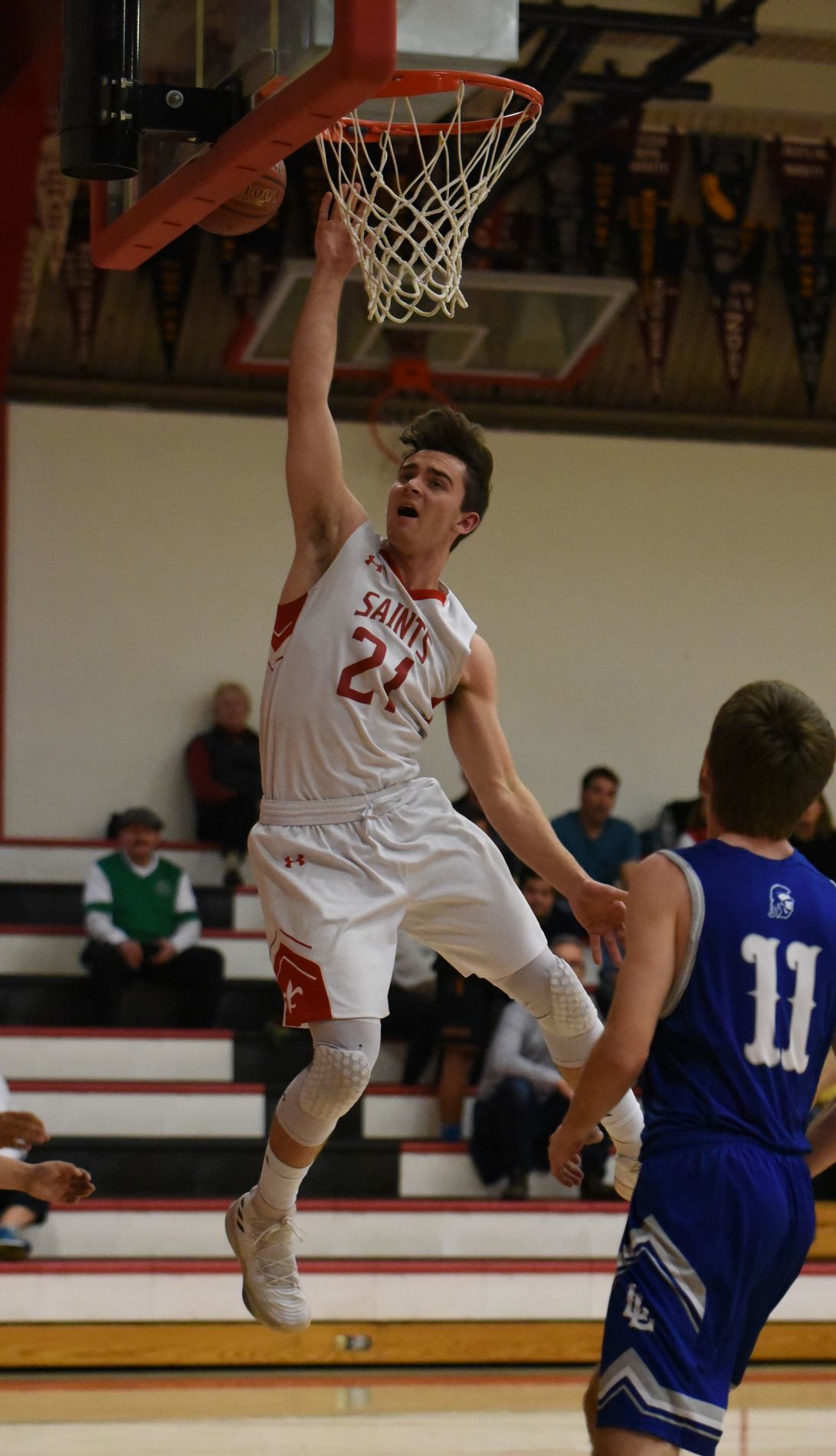 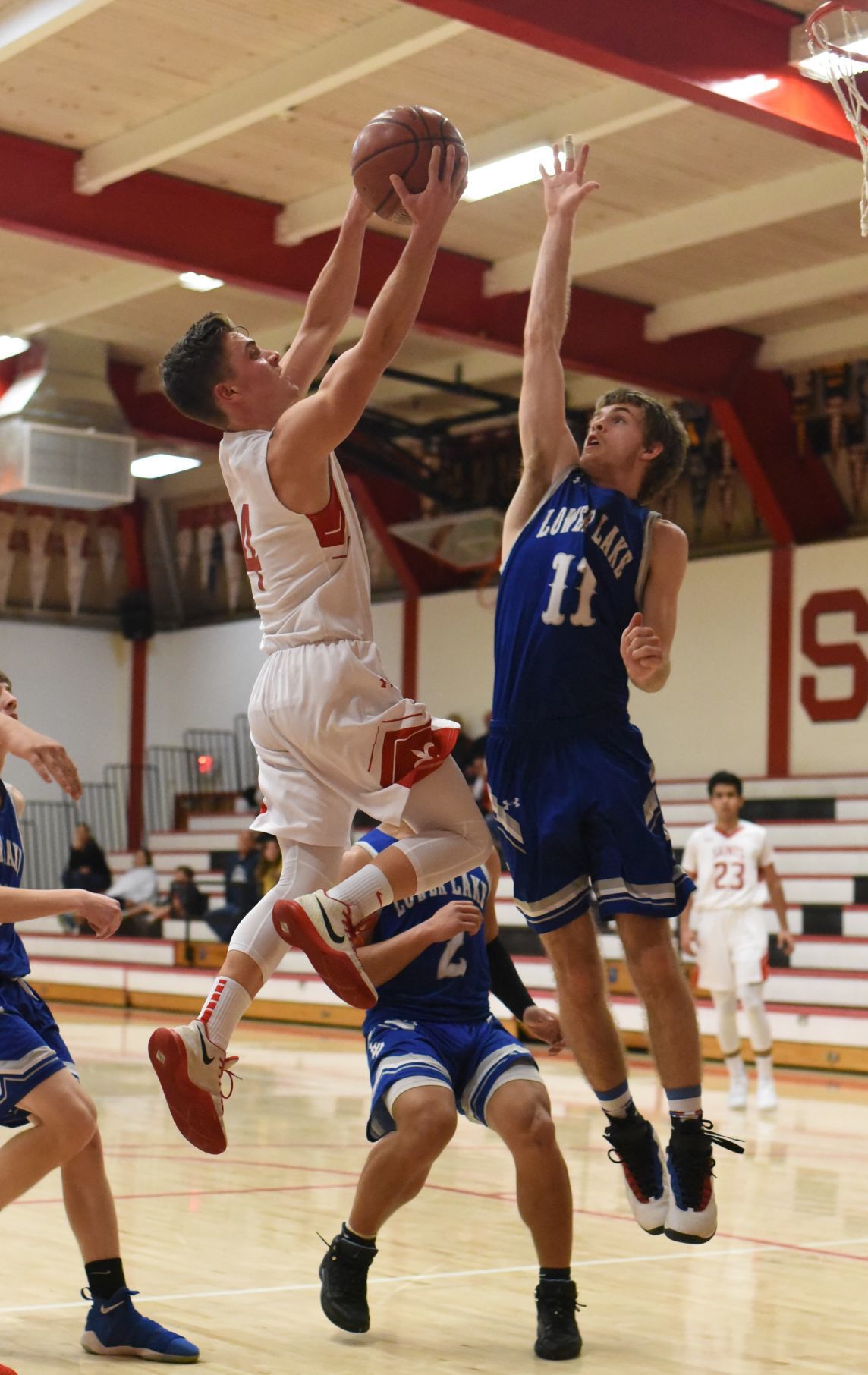 St. Helena's Collin Darrall goes up for a layup against a Lower Lake player on Tuesday.

Adding to the emotion of the evening, Tuesday’ s contest was the final home game for seniors Caleb Jeske, Caleb Granados, Jonathan Gamble, Colin Darrall, Mason Marquez, Jake Mendes and Jawad Muhammad as the Saints (11-12 overall, 5-8 in NCL I) cruised to the easy victory.

The game was never in doubt as the Saints held a 39-19 halftime lead and a 67-24 advantage over the Trojans (6-13, 4-9 NCL I) after the third quarter. The latter margin led to the implementation of a running clock at the start of the fourth quarter.

The seniors, who were recognized before the game in a short ceremony, accounted for 47 of the Saints’ 72 points. It was a team victory in the truest sense of the term as every player who entered the game scored.

Head coach Jim Gamble praised his seniors for their collective effort throughout this season.

“I’m so happy for the seniors. ... They just bring it,” he said. “They just bring so much hustle, so much effort, so much intensity, every single game. It’s so much fun to see all that hard work rewarded.”

Muhammad and Jeske scored 12 apiece while Darrall contributed 8 points. Marquez, who scored the Saints first five points of the game, finished the evening with 7. Mendes chipped in 4 while Gamble and Granados had 2 points apiece.

It was sophomore George Cutting who paced the Saints with a team-high 13 points. Junior Fawad Muhammad added 6 and Will Garrett and Emmett Bowen scored 3 points apiece.

The win avenges a 63-52 loss the Saints suffered to the Trojans in the first half of the league season. It also bolsters their playoff resume. With a 6-6 record against other Division 5 opponents, the Saints can apply for an at-large bid to the North Coast Section playoffs. The seeding meeting for the NCS playoffs will be held this Sunday with the first round of games scheduled for Wednesday.

The Saints have one final game on their league schedule as they travel to Kelseyville on Thursday. It will be another chance to add a win against a higher division school in hopes of improving their chances at landing a playoff spot.

The Saints (7-17) ended their home season with a hard-fought overtime loss on Tuesday night. Will Meyer led the Saints with 17 points while Cal Lehman also finished in double figures with 13 points. Miles Harvey scored 9 points while Emrys Davies had 7 points, Henry Dixon and Charlie Knight each had 4 and Charlie Carpy 2.

Meanwhile, Anthony Hills led the Trojans with a game-high 25 points

In a defensive battle, the Saints emerged victorious at home to complete the season sweep of the Wolverines (5-17, 1-12 NCL I). The win also moved the Saints to a 6-6 overall record against Division 5 opponents this year, the mark needed to be eligible to apply for an at-large playoff spot.

The Saints led 14-10 after one and took a 25-15 lead into the break. An even third quarter sent the Saints into the fourth ahead 32-22 but Willits cut the deficit to as little as four with only three minutes remaining until a steal and layup from Jeske gave the Saints some breathing room.

“That was one of the most stressful games I’ve ever coached,” Coach Gamble said. “We just couldn’t get any rhythm going offensively. Our defense was unbelievable tonight and that’s what won the game for us. We are going to have nights when we don’t shoot the ball well and it helps knowing every kid on the team loves playing hard-nosed defense.

“We needed it tonight and that’s what won the game for us.”

After falling behind by as much as 11 in the first half and trailing 34-29 at the break, the Saints erupted offensively in the second half to handily defeat the Wolverines.

Over the final two quarters, the Saints outscored the visitors 48-27.

Meyer led the way with 19 points while Dixon chipped in a healthy 16.

Get caught up on all the local fishing news with Bill Ryan's monthly column.

Pacific Union College in Angwin announced on Friday that the school would be adding two new sports — men’s volleyball and women’s soccer — at the start of the 2020-21 school year.

The St. Helena High varsity girls basketball team closed out its season on Thursday with a tough 73-24 loss to visiting Kelseyville on the Sai…

The seniors of the 2019-20 St. Helena boys basketball team. Pictured on the top row, from left to right, are Jawad Muhammad, Jonathan Gamble, Mason Marquez and Caleb Jeske. On the bottom row are Caleb Granados, Collin Darrall and Jake Mendes.

St. Helena's Collin Darrall whips a pass to a teammate against the Trojans on Tuesday.

St. Helena's Collin Darrall goes up for a layup against a Lower Lake player on Tuesday.