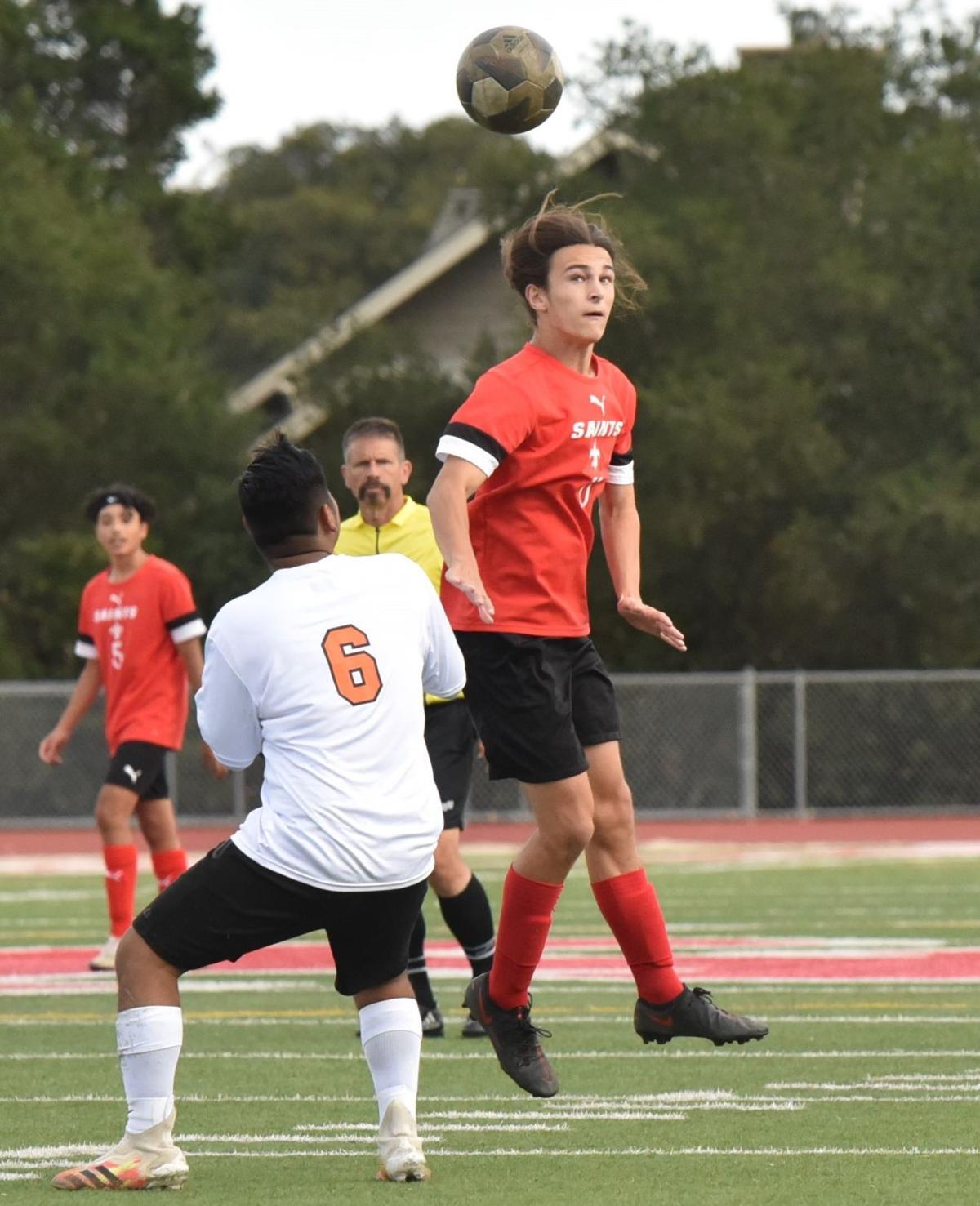 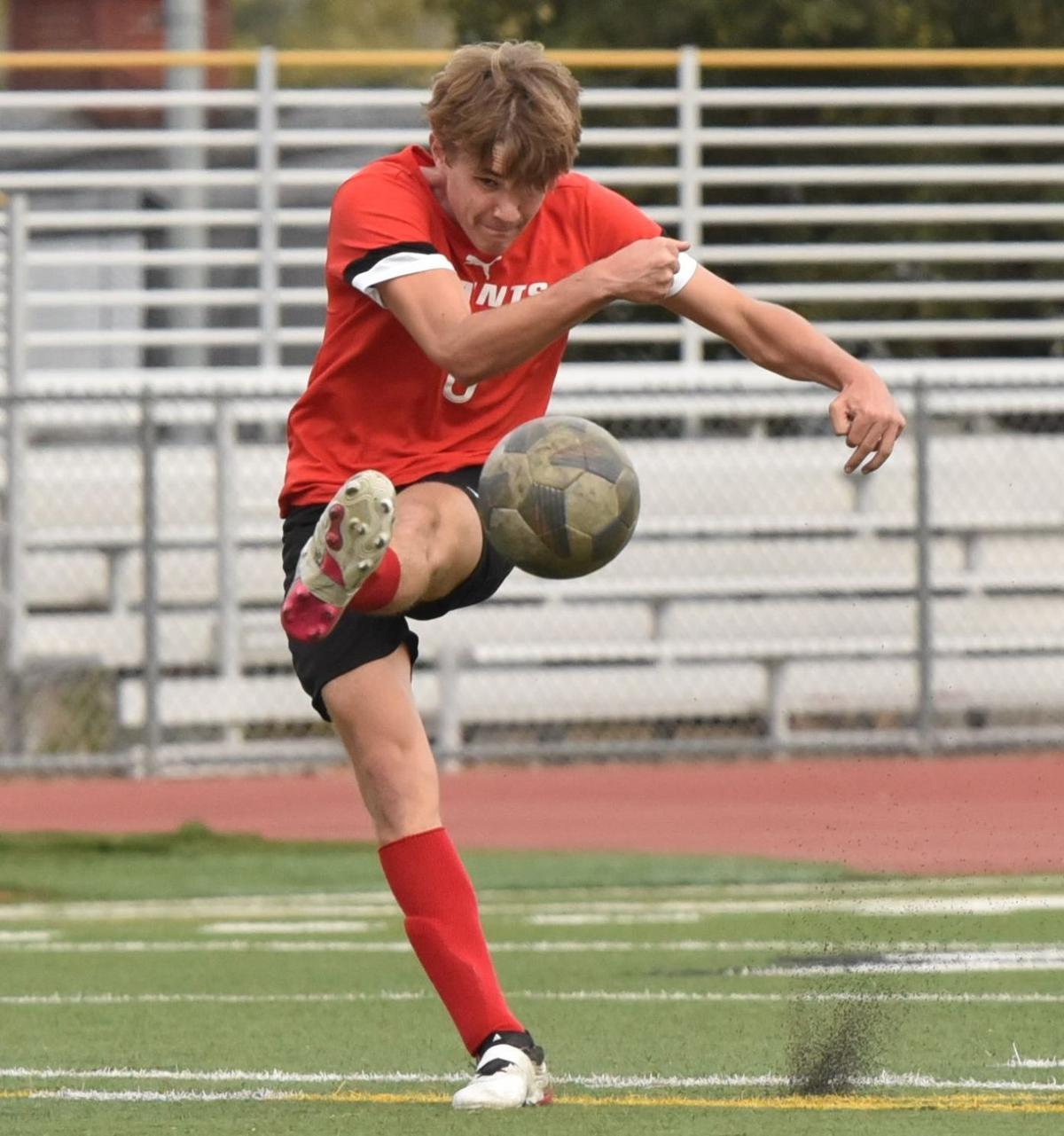 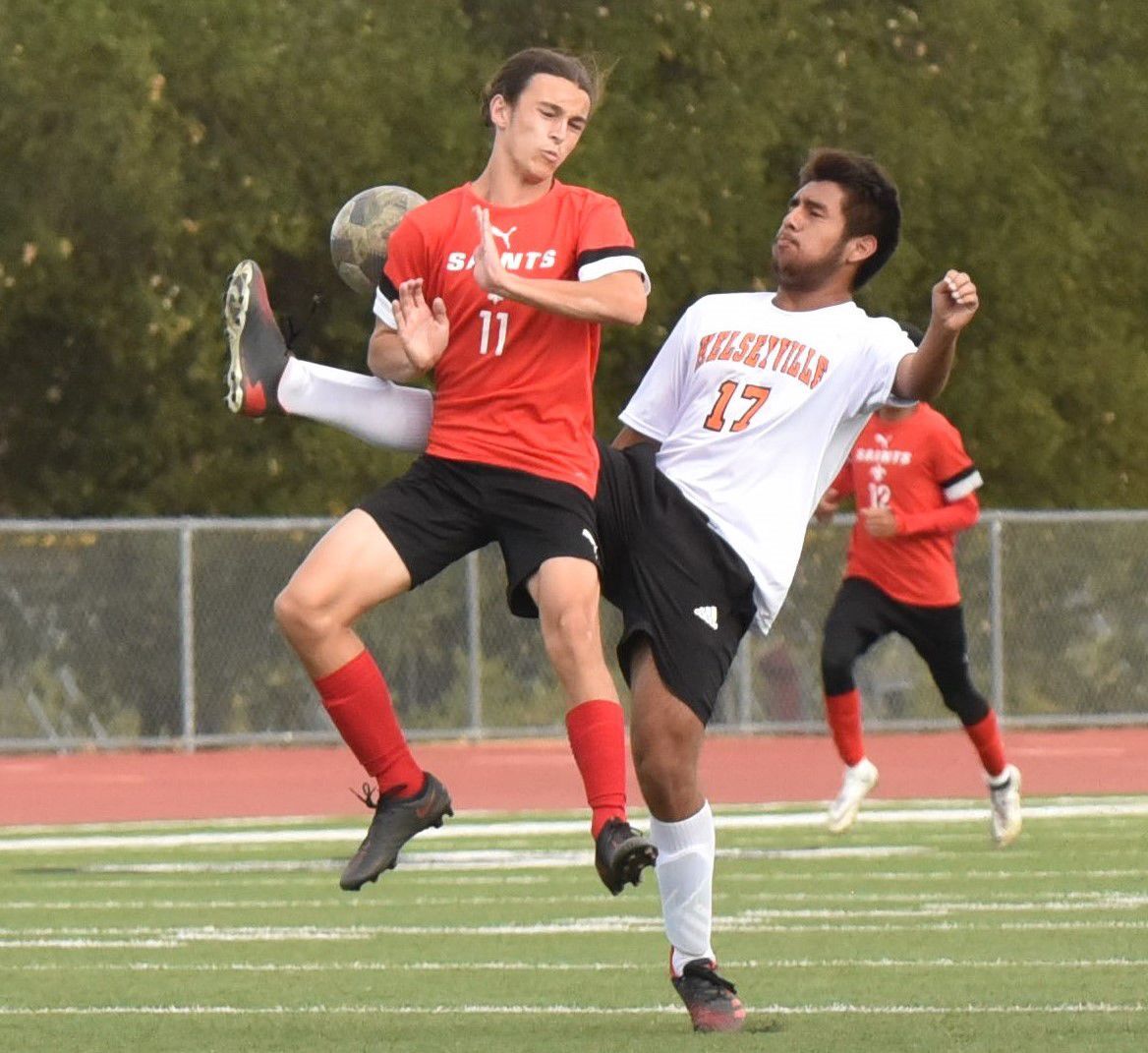 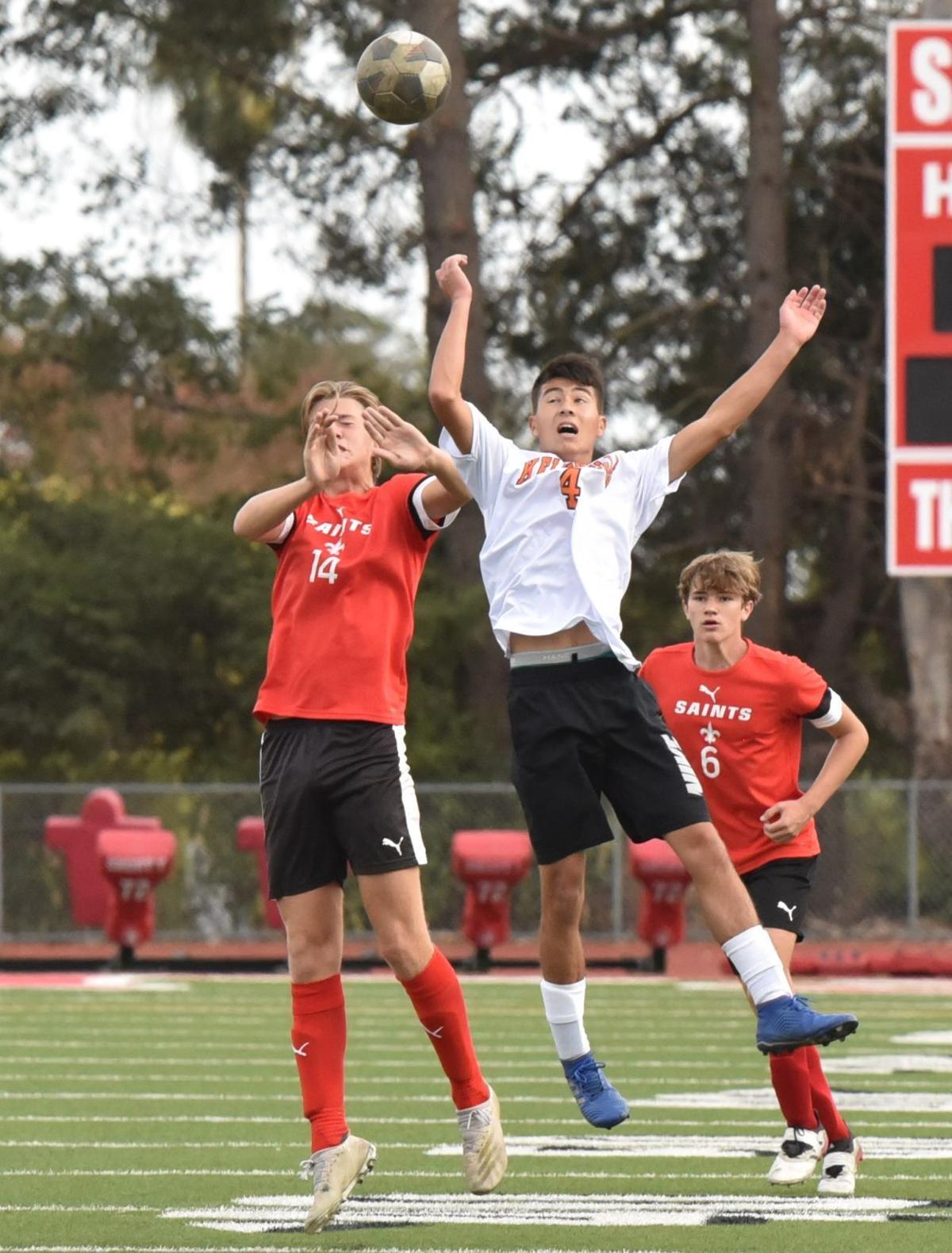 St. Helena's Flynn Fuller (14) battles a Kelseyville player for a ball in the air as Charlie Carpy (6) looks on last Thursday. 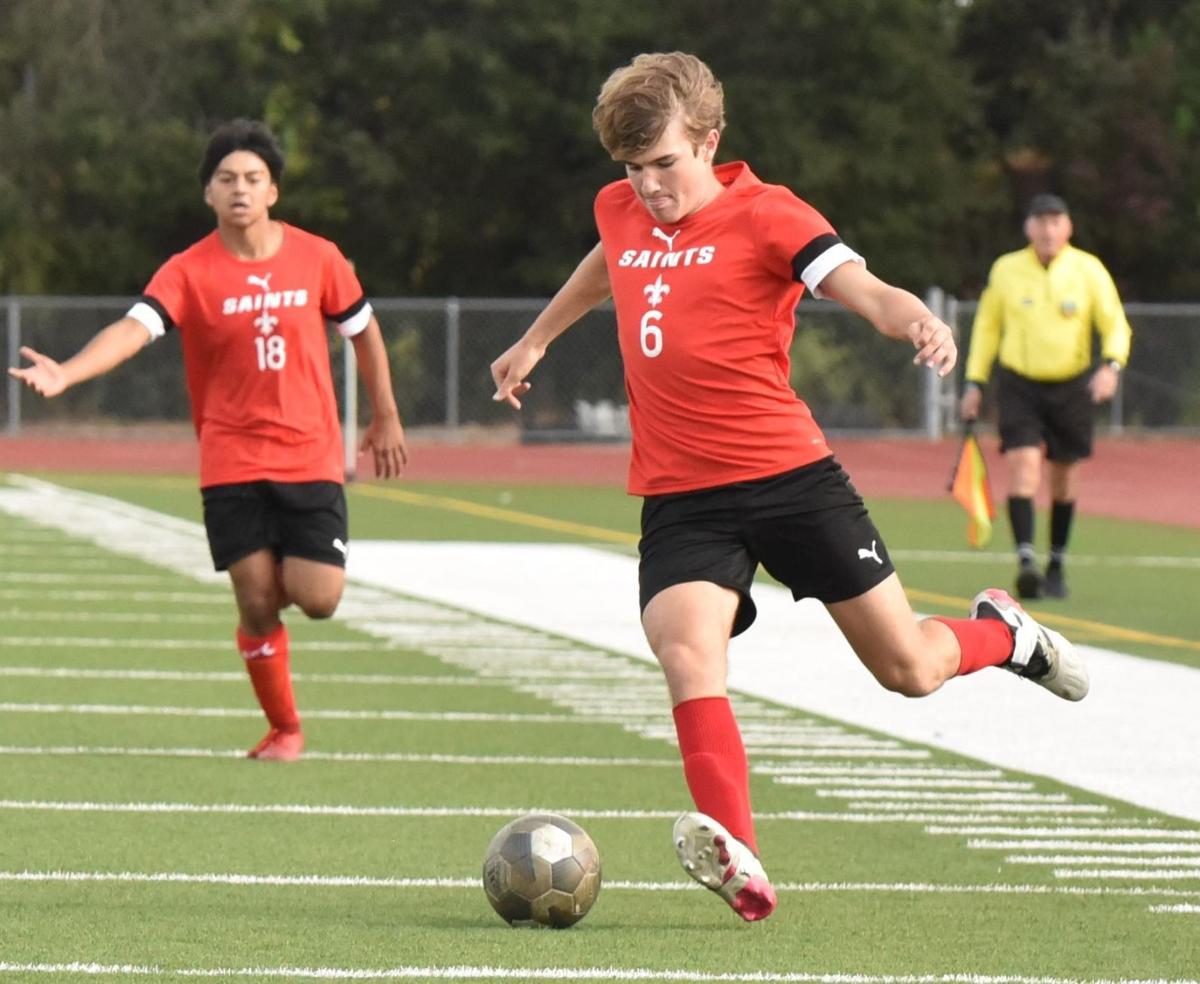 St. Helena's Charlie Carpy (6) looks to cross the ball in front of the Kelseyville goal as teammate Leo Rodriguez (18) backs him up last Thursday. 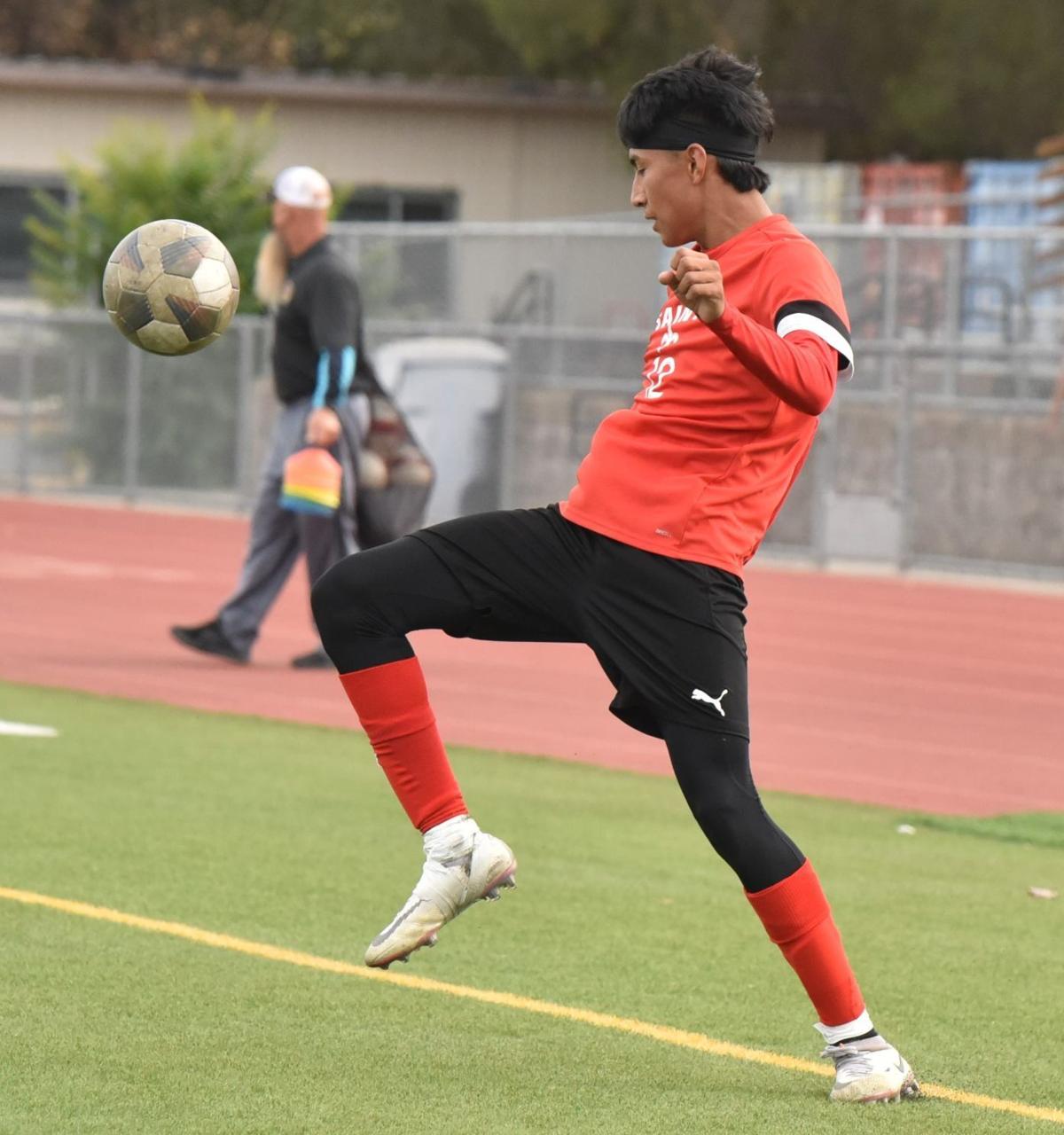 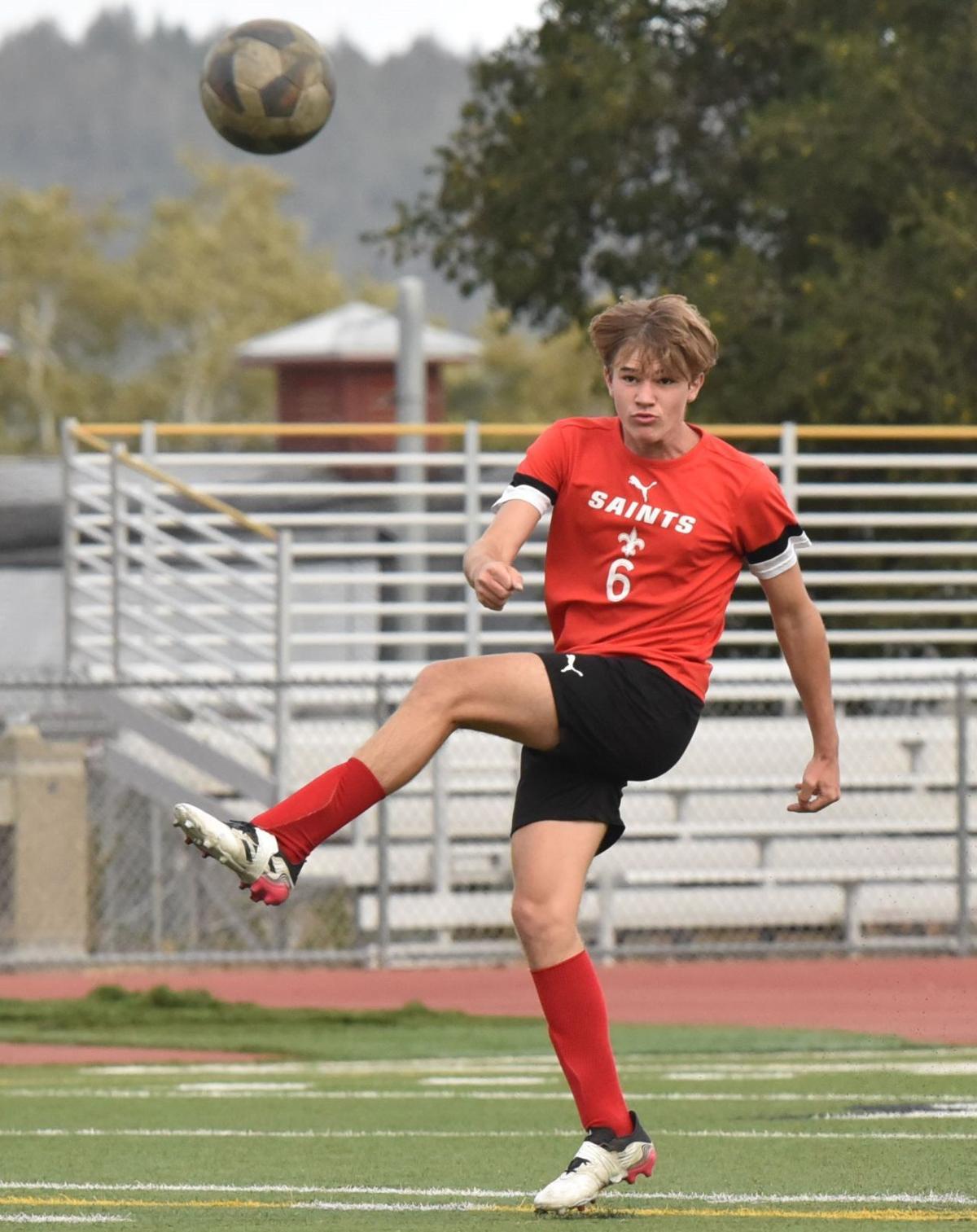 When someone is able to succeed at something they haven’t tried in a long time, they might say it’s like riding a bike.

For the St. Helena High School soccer teams, even though they hadn’t played in two years, it’s been like driving a golf cart.

The Saints will look to bounce back this Thursday when they host Willits (7-3-1, 4-3-1 NCL I), which they routed 5-0 on the road last month after leading 1-0 at halftime.

St. Helena stayed in league-title contention last Thursday with a 5-0 home win over Kelseyville. The Saints got a hat trick from Julian Martinez, who scored twice in the first half and along with Juan Garcia gave the hosts a 3-0 halftime lead. Gino Hanna and Martinez scored midway through the second half.

“We were confident throughout the game,” he said. “We controlled the tempo of the game we created a lot of chances and defensively we played good. I like playing to my right back, Juan (Garcia). He opens up the field really nicely and he can take it down the wing when you need him to, even though he’s a defender.”

Cruz said he and his team are ready for Tuesday’s rematch at Cloverdale.

“I’m excited,” he said. “I think we’re looking great and we’re going to come out on top.”

“I was very pleased with our team’s performance considering we have two big pieces missing with Aaron and Andres not in the lineup. We’re missing our main midfielder and main attacker, who was on a record-pace season,” he said. “When you lose two guys like that, you have to step up, and I think we did.

“We’ve got to have this mentality of moving the ball and not letting a team like Kelseyville settle in. Just the fact that we were moving the ball and trying to create opportunities and playing on their side of the field and having possession, if you check all those things off, you’re going to come up with a win regardless how many shots on goal you take and whether they go in or not. Eventually, they do go in when you give yourself that kind of opportunity.

“Now we have an opportunity to erase our only loss. Hopefully we can pull it off.”

The Saints geared up for the big contest by hosting Sonoma Academy in a nonleague game Friday and handing the Coyotes (6-1-2) their first loss of the season, 2-1.

The St. Helena girls team took 8-3-1 overall and 6-2-1 NCL I records into this past Tuesday’s match at Cloverdale, which the Saints dispatched 5-1 last month at home. Results of the rematch were not available at press time.

They sort of avenged one of their league losses by tying Middletown 2-2 the previous Tuesday, having lost 3-2 to the Mustangs earlier. St. Helena still has a chance to avenge last month’s 4-1 loss to Roseland University Prep when it visits the Knights this coming Tuesday.

In their 7-0 rout of Kelseyville on Thursday, the Saints saw three of their players score twice. Aubrey Moura and Eva Bowen connected early and late in the first half, with Mabel Wilms also scoring for a 5-0 halftime advantage. Wilms added another goal in the second half, before Kaylee Moura closed the scoring with 11 minutes left.

“We had a game plan to control the pace of the game, and that’s what we did,” said Saints head coach Milton Gallegos. “It wasn’t always pretty, but when you play a team that’s a little bit weaker, sometimes you struggle on some stuff. But we dominated the game.”

He said co-captains Kiara Munoz-Gonzalez and Kaylee Moura “controlled the back line with their experience” and that Wilms and Aubrey Moura took control of the midfield and Mia Hernandez shined “on top, getting those through balls and getting those shots on goal.”

Meanwhile, he said, Andrea Rodriguez-Mendoza “became a starter only a couple of weeks ago and has really changed our wing attack on the sides.”

Assistant coach Michael Hanna was pleased with the Saints’ execution against Kelseyville.

“We had some really strong moments of brilliance out there with the give-and-gos, and we’ve been working on some overlaps and some of the set plays really went nicely; they went the way we practiced them,” Hanna said. “I was pleased that we got a chance to get everybody some playing time today. It’s great for the younger players to see the intensity and pace of a varsity soccer match.

Kaylee Moura said the sudden passing in April 2020 of then-senior Emma Fife, the 2019 team’s star player and a 2019-20 Napa County Girls Soccer Player of the Year Finalist, is still fresh on the older players’ minds.

“It was hard,” the senior said. “I met some of my best friends on the team after the death of Emma Fife, but it was hard to bring the team back together and get us on the field. It’s been hard to play without her, but I’m glad I can follow in her footsteps.

“I think our team has been developing a lot of great skills throughout this season so far. I’m excited to see where this season leads. I like the development. From the beginning, with so many new players, it was hard to develop and move the ball up the field gracefully, but I think we’ve found our rhythm. I think we can make it far in playoffs if we really set our hearts to it.”

The St. Helena High boys cross country team was the only one of the four in the field that had the minimum five runners needed to post a team …

Gino Hanna had a hat trick before halftime in sparking the St. Helena High boys soccer team to a 9-0 victory over visiting Buckingham Charter …

Ivan Robledo ran for 160 yards and three touchdowns in just nine carries as the St. Helena High football team shut out Lower Lake on the road Friday night in a North Central League I contest.

St. Helena's Flynn Fuller (14) battles a Kelseyville player for a ball in the air as Charlie Carpy (6) looks on last Thursday.

St. Helena's Charlie Carpy (6) looks to cross the ball in front of the Kelseyville goal as teammate Leo Rodriguez (18) backs him up last Thursday.