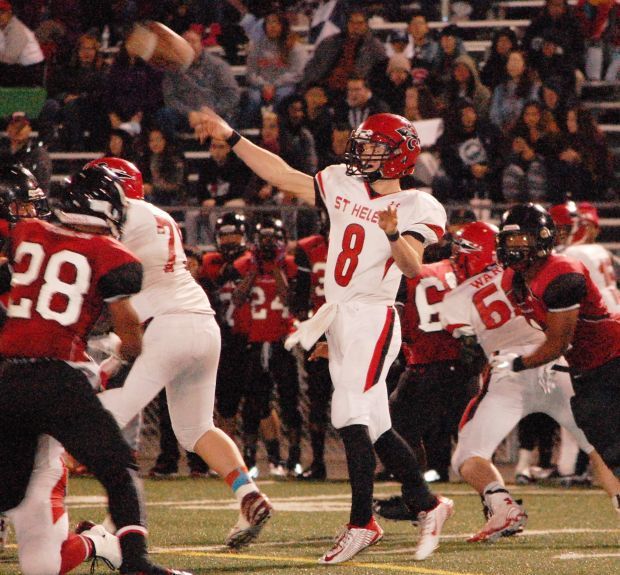 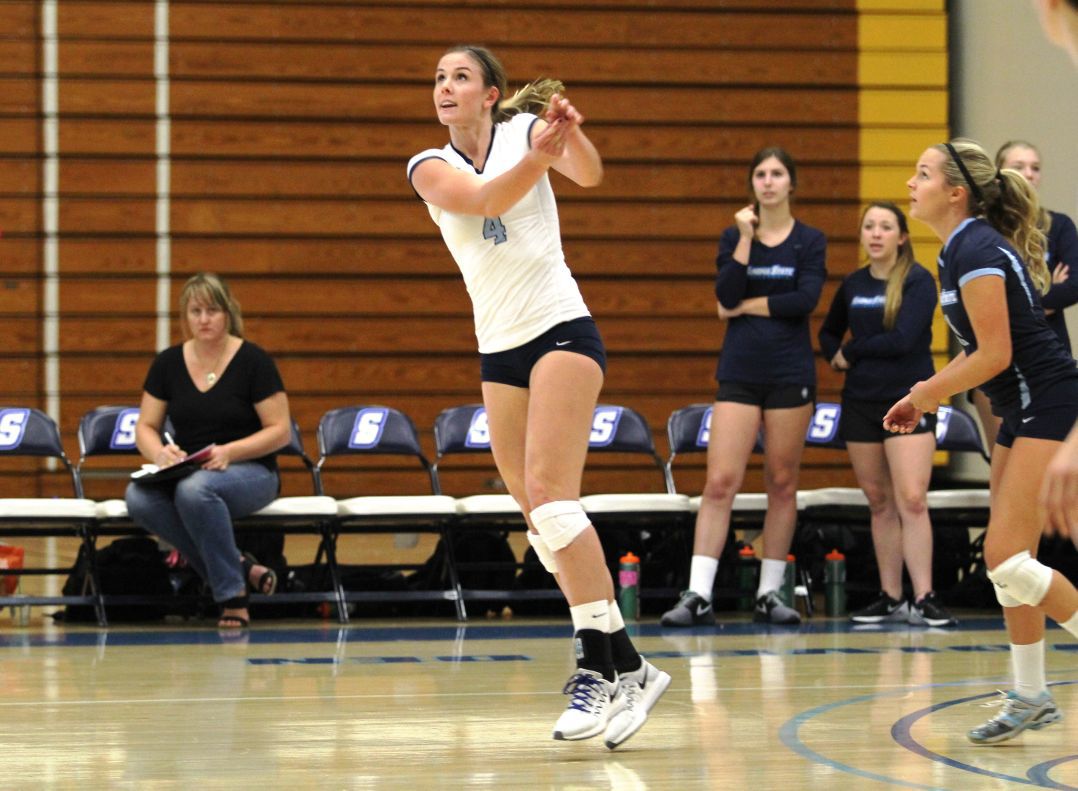 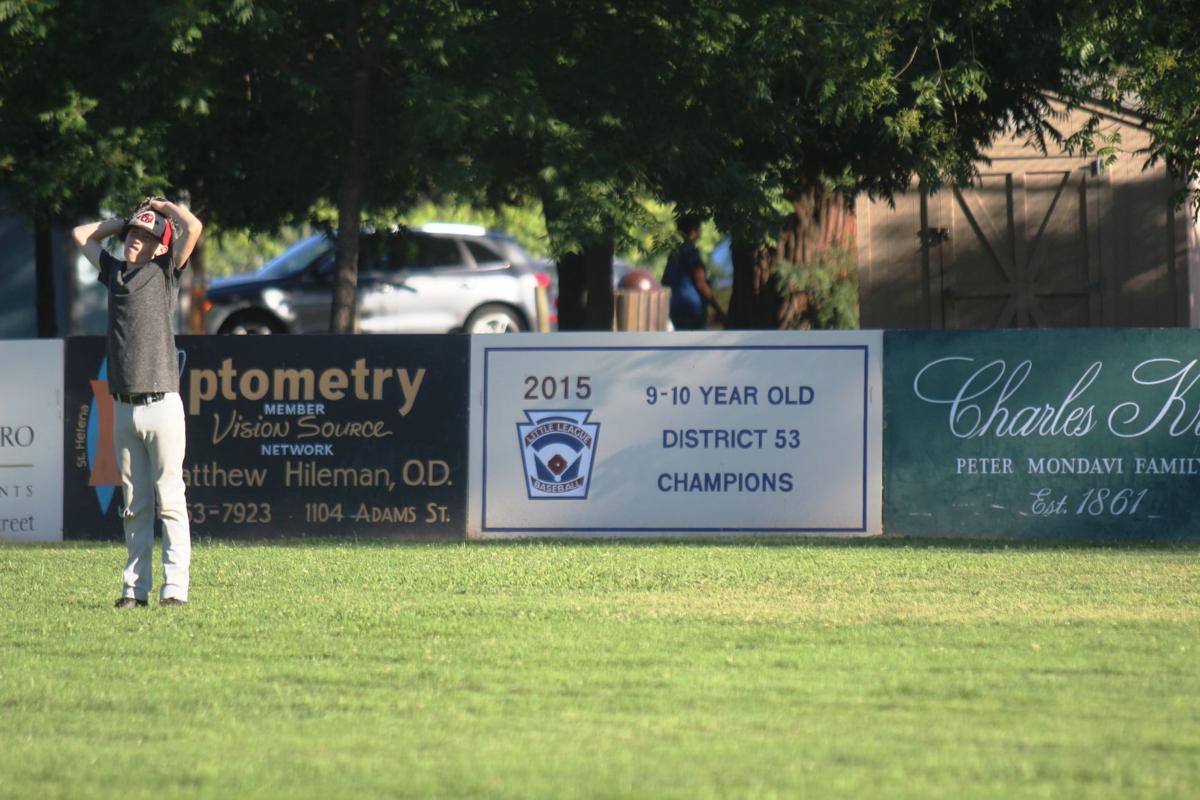 A sign commemorating the St. Helena Little League 9-10 All-Stars District 53 championship from 2015 is seen in center field at Crane Park. 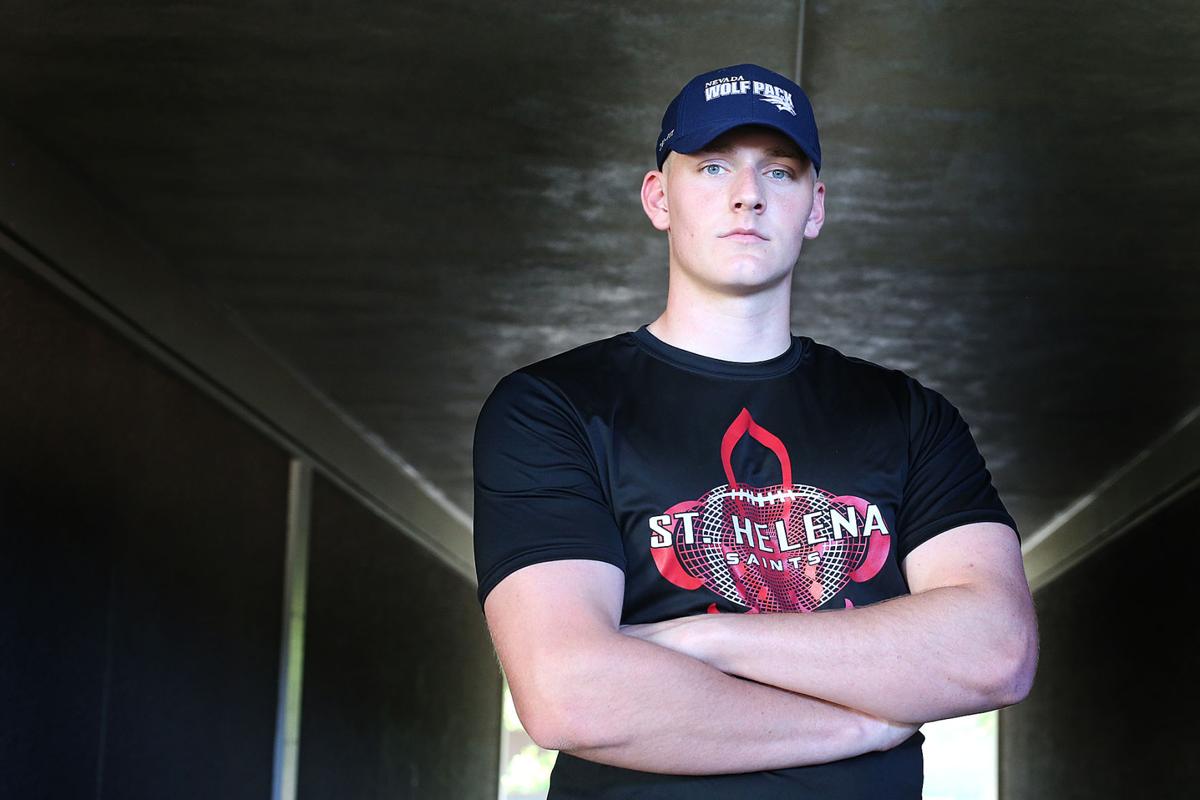 Two-sport star Gannon Laidlaw will continue his football career at the University of Nevada, Reno on the first first full-ride football scholarship earned by a St. Helena High School student in over 50 years. 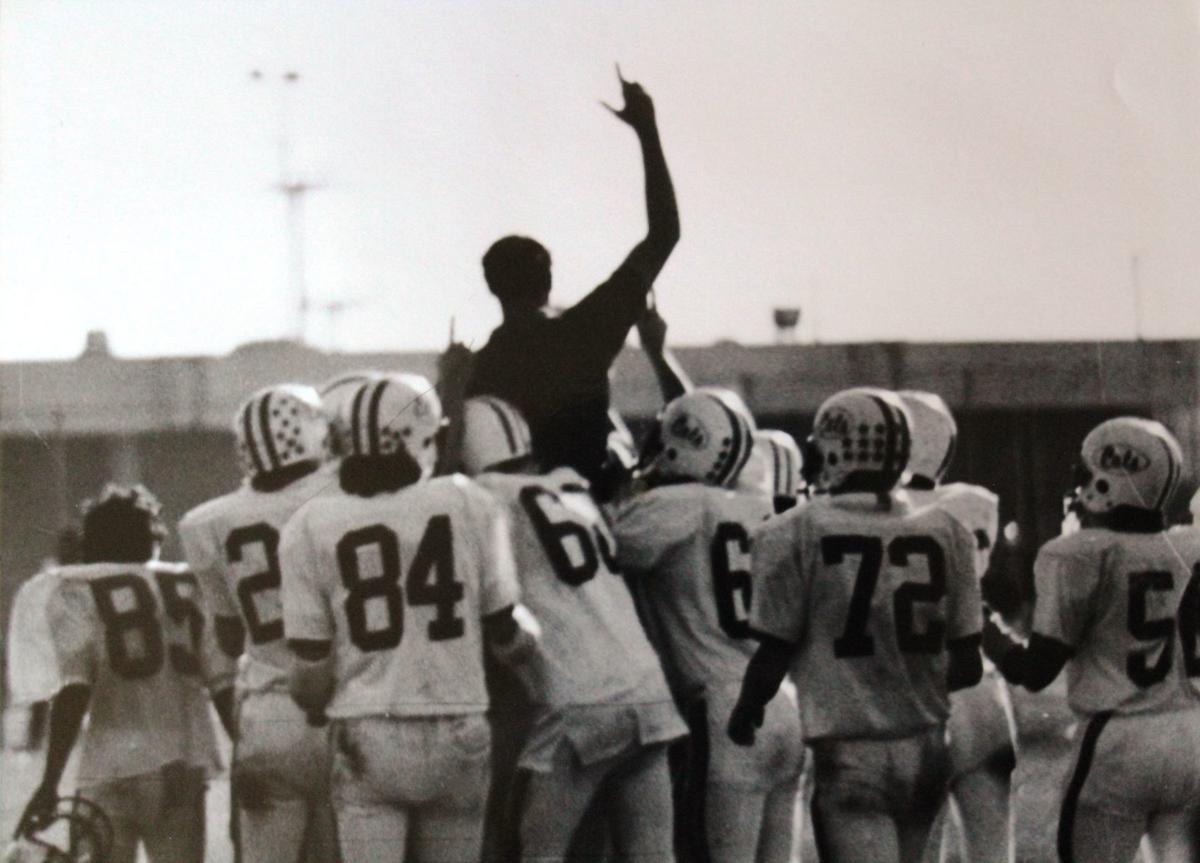 Jim Hunt is carried off the field by his Calistoga High football players following the 1978 North Coast Section championship victory. 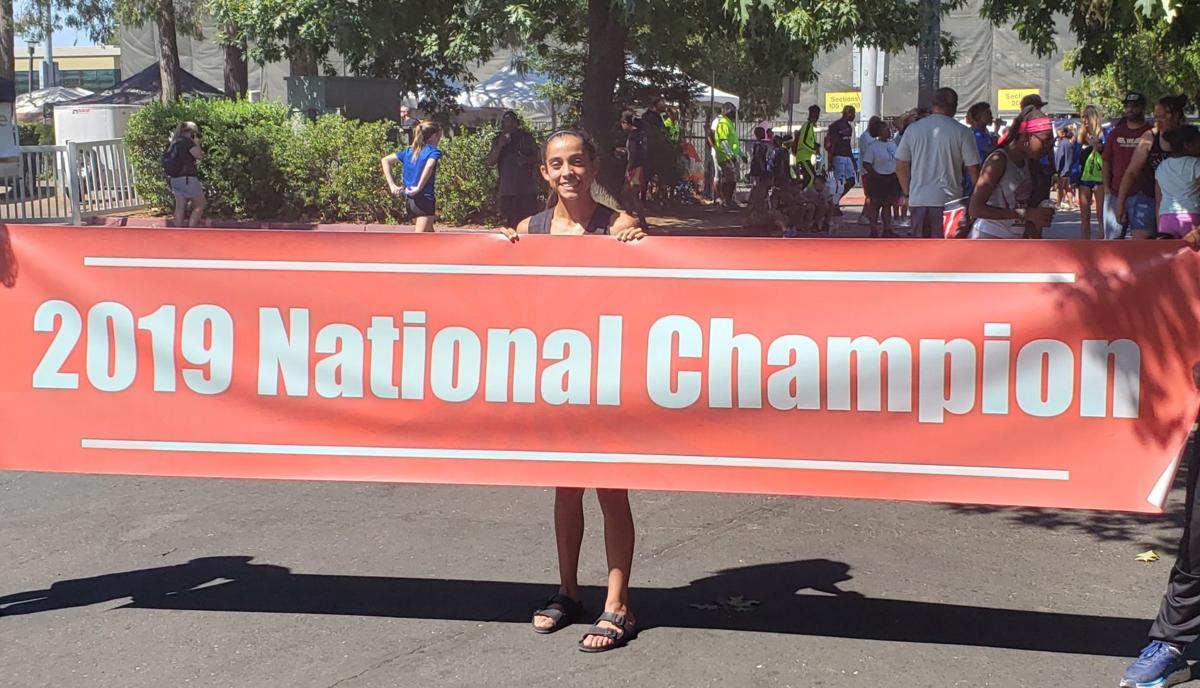 St. Helena High's Harper McClain poses with a banner after after winning the national championships in the girls 1,500 and 3,000 in her age group at the USATF Junior Olympics at Sacramento State. 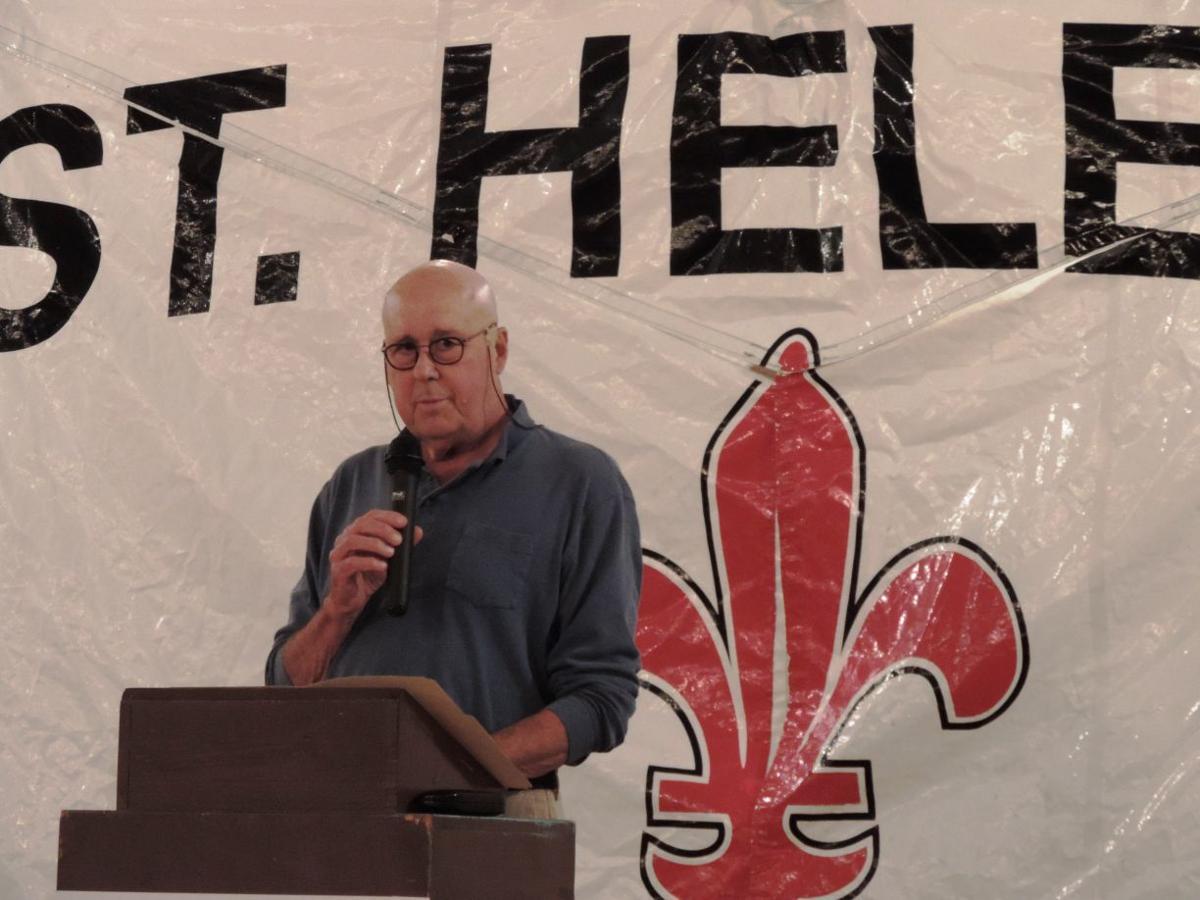 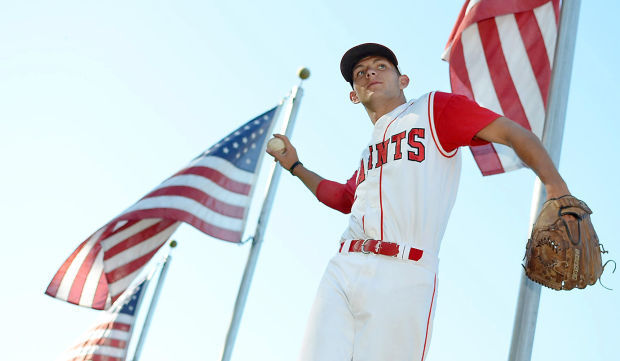 Richard Hoppe, shown here in 2012, was a multi-sport standout during his time at St. Helena High School.

Where has the time gone?

And as if picking the best sports stories from the last year wasn’t difficult enough, the Star staff decided to go back and look at the most memorable stories from the past decade and tried to compile them as best we could.

Here’s what we thought were the most memorable sports stories from 2010 to 2019.

The St. Helena varsity basketball team had one of its strongest stretches ever at the beginning of the decade. When Will Densberger took over the program in 2007, the team went from 16 wins in the three years prior to 58 wins in the three following, including winning the the first league championship in school history in 2008-09.

The St. Helena varsity volleyball team put together one of its best season in recent memory in 2010, thanks in large part to the standout play of star outside hitter Maddy Densberger.

The senior topped both the 1,000 career points and 1,000 career kills marks in 2010 as she helped the Saints compile a 29-5 overall record. The Saints advanced all the way to the NorCal semifinals, the furthest the team had gone in seven years.

Densberger capped her career by committing to play college ball at Sonoma State on a full-ride scholarship.

The St. Helena girls soccer program has had a great decade of sustained success, but it put together its best season early on.

The Saints advanced all the way to the Division 3 NCS finals before falling to St. Vincent in a 1-0 heartbreaker.

It was the first time the Saints had made the finals since 2005. They finished the year 13-4 overall.

With Richard Hoppe at quarterback, St. Helena reached the semifinals of the Division 4 NCS playoffs. Hoppe, who still owns a majority of the school’s passing records, went 27-9 as a starting quarterback and won two North Central League I titles with three playoff appearances.

As a senior he passed for 2,152 yards with 26 touchdowns and just three interceptions.

The highlight of the Saints’ 11-2 season was a 29-25 win at Salesian in the quarterfinals of the playoffs.

The St. Helena Little League 9-10 All-Stars took home the District 53 tournament title for the first time in the town’s history in 2015.

Other than Middletown, St. Helena was the smallest city, yet played with the biggest heart.

St. Helena won its first two games by way of the 10-run mercy rule, then faced off against Benicia three times over the following week.

St. Helena dropped the first matchup 11-1 but then won the second game in dramatic fashion a day later. After squandering a 7-0 lead, St. Helena rallied late for an 8-7 victory to make it to the championship game.

Facing Benicia for the third time, St. Helena was once again victorious, winning the District 53 title with a 5-1 win to advance to the Section 1 Tournament. While St. Helena went 0-2 at that stage, it was still an impressive accomplishment to represent District 53.

The 2014 St. Helena varsity football team will likely go down as one of the best in school history. Their 12 wins are still a school record, but that likely only makes the two losses hurt that much more.

The Saints’ second and final loss of the season came in the Division 5 NCS title game against the Pride, in a tight and hard-fought 14-7 brawl.

It was the Saints first appearance in a section title game since 1977.

One of the anchors of that 2014 football team was Gannon Laidlaw.

The 6-foot-5, 250-pound tackle was an x-factor in any sport he played but dominated on the gridiron above all else. A day before National Signing Day in 2015, the senior called a call from the University of Nevada-Reno offering him a scholarship.

Laidlaw signed with the Wolfpack, beciming the first Saints football player in over 50 years to earn a full-ride scholarship to a Division I program straight out of high school.

In fall of 2017, regular life in St. Helena was brought to a standstill for weeks due to the deadly Tubbs Fire.

Air quality was poor and forced residents to take shelter indoors until the fires were put out. At the prep level, multiple games were canceled for Saints football, volleyball, soccer and cross country. Some of those cancellations, for football in particular, heavily impacted the overall success of the team as they lost two pivotal games from their schedule.

Jim Hunt, a beloved member of the Upvalley community, died in late June at 72.

Hunt, a St. Helena High graduate in 1962, was an exceptional football, basketball and baseball player and went to play quarterback and defensive back at UC Berkeley.

After college, Hunt became a teacher in Massachusetts before returning to the Napa Valley, where he taught at Justin-Siena, Calistoga Junior-Senior High School and then Rancho Cotate High in Rohnert Park.

In Calistoga, Hunt earned the adoration and respect of the community as the Wildcats’ football coach from 1978-84. He won the North Central League II and North Coast Section Class B championships in 1978 behind a perfect 9-0 season. He also led the legendary “Dirty Dozen” in 1984.

In retirement, Hunt helped form the St. Helena High Athletic Hall of Fame and was a local columnist for the St. Helena Star, writing his weekly “On This Date Plus” series, which took a look back at historic moments in St. Helena sports history.

We highlighted McClain last week in our top stories of 2019, but what she’s accomplished in her short time as a prep distance runner has been nothing short of historic.

In her first season of track and field, she became the school record holder in the 800-meter race, 1,600 and 3,200 and went on to record a top-ten finish at the CIF State Track and Field Championships.

She added to her legacy in the fall during the country season, once again setting numerous course records and winning league, conference, section and state titles – the first state title in school history – along the way. What’s more is she’s only in the middle of her junior year at SHHS. She’ll be looking to improve on her school records in track and field this upcoming spring as well as aiming to add a track and field state title to her trophy case.

Napa Valley Register's Top 10 Sports Stories of the 2010-2019: Decade of big stories both good and bad

Prep sports in the Napa Valley this past year provided some incredible stories I was honored to tell. Here are some I thought stood out from t…

A sign commemorating the St. Helena Little League 9-10 All-Stars District 53 championship from 2015 is seen in center field at Crane Park.

Two-sport star Gannon Laidlaw will continue his football career at the University of Nevada, Reno on the first first full-ride football scholarship earned by a St. Helena High School student in over 50 years.

Jim Hunt is carried off the field by his Calistoga High football players following the 1978 North Coast Section championship victory.

St. Helena High's Harper McClain poses with a banner after after winning the national championships in the girls 1,500 and 3,000 in her age group at the USATF Junior Olympics at Sacramento State.

Richard Hoppe, shown here in 2012, was a multi-sport standout during his time at St. Helena High School.