An open air festival in Yountville Art, Sip & Stroll returns on June 12
Share this
{{featured_button_text}}
1 of 3 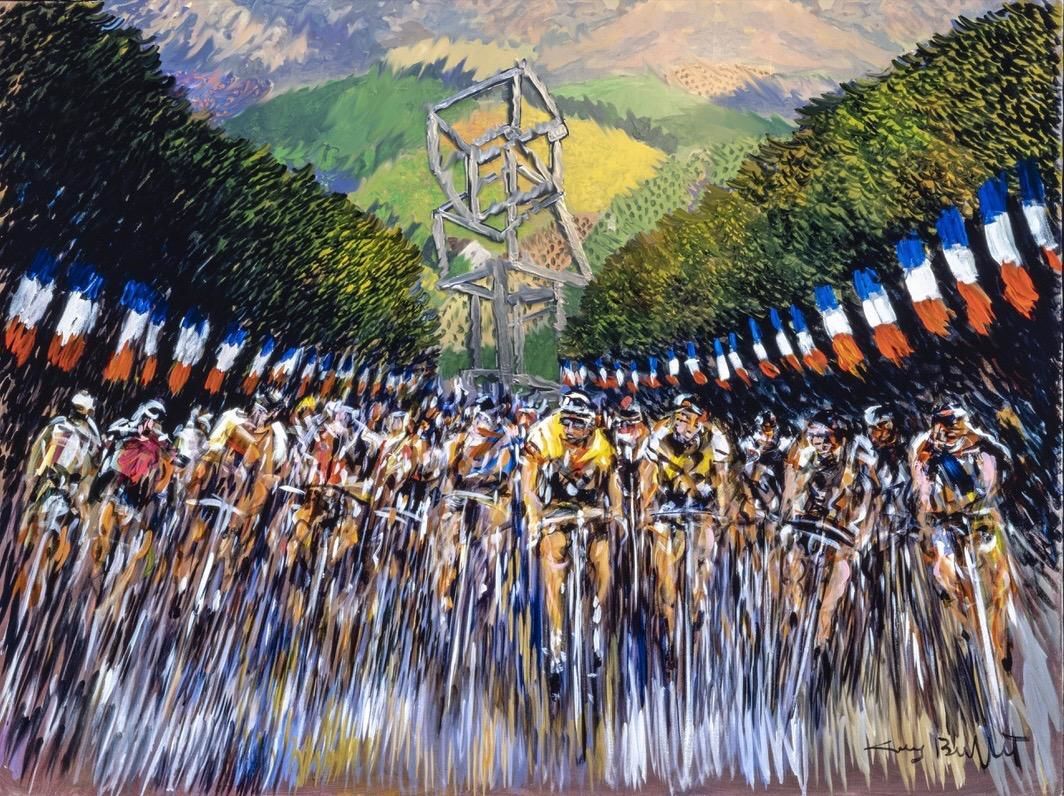 Guests explore Yountville and meet artists at the annual Arts, Sip & Stroll. Cancelled in 2020, it returns this year on June 12. 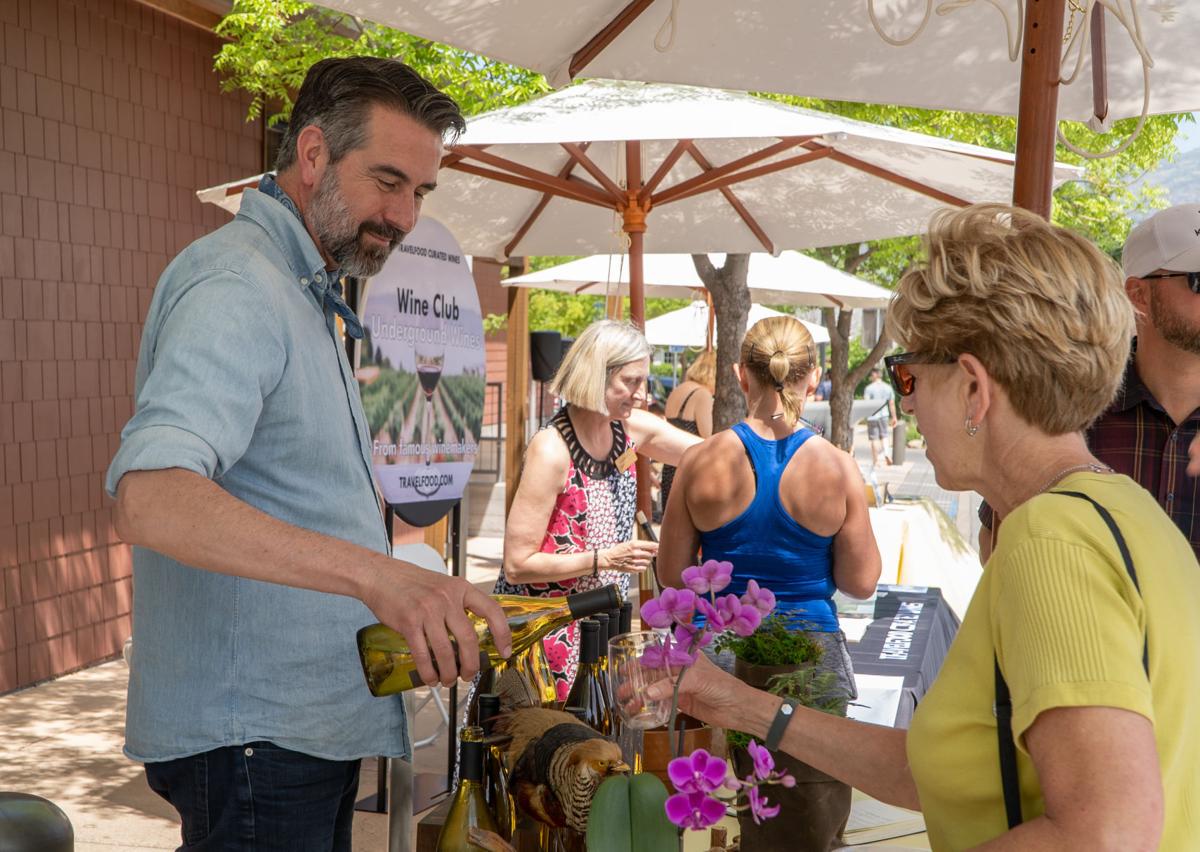 New tasting pavilions will be serving tastes of local wines for ticket holders.

As live, in-person gatherings return to Napa Valley, Yountville presents one of the first with its ninth annual Art, Sip & Stroll, an open-air art festival taking place on Saturday, June 12, from 11 a.m. to 5 p.m.

The featured artist is Guy Buffet, a French-American, known for his whimsical works, often inspired by food and wine. Buffet created the original watercolor painting seen on the event poster and will also participate in a three-month exhibit at the Gallery at the Yountville Community Center that includes many of his original paintings.

Art, Sip & Stroll will include more than 50 juried artists as well as live music.

It's free to attend the outdoor event. Wine tasting packages are available for $35 per person and include a go-vino glass, four wine tasting tokens and a signed Guy Buffet Event poster. Wine tasting pavilions will be set up along the route

Concierge services will be available for shipping, wrapping, and holding items until the end of the event.

The gallery exhibit opens June 10 and runs through Sept. 10.

Visit www.artsipstroll.com for more information or to purchase tasting packages.

Guy Buffet will be at the June 12 Art, Sip & Stroll and make other appearances during the run of his gallery show.

Originally from Paris, Buffet has lived and worked in Polynesia and San Francisco. He presently splits his time between Paris and the San Francisco Bay Area.

His love of the places where he has lived and visited is reflected in his paintings where he often depicts chefs, sommeliers, waiters, and café scenes.

"Guy has had a historic presence in Napa Valley," said Ronda Schaer from Yountville Arts. "He loves our area and is especially fond of the diversity and uniqueness of our Napa Valley wines. He has maintained a residence in San Francisco, as well as other nearby Bay, Area communities since the early 1970s. Whereas he spends considerable time in his home country of France, he always returns to the Napa Valley and feels part of our lifestyle and culture."

Schaer said Napa Valley and Yountville" have appeared in his repertoire for many years. In the early 1990s, he created a series of paintings for Far Niente and subsequently was commissioned by Silver Oak."

Over the years he has been represented in Yountville at various galleries and presently has his own business in shared representation with Yountville Arts through Sept. 10.

"Guy is donating the original watercolor he created for our 2021 Poster to the Town of Yountville," Schaer said. Buffet has donated two prints to Yountville Arts. A drawing ticket at $5 per ticket or three tickets for $10 will give you an opportunity to win one. Proceeds will go to the Yountville Arts and its many communities and public art programs.

The run of his show at the Yountville Community Center includes the following events:

• Paws on The Plaza: Saturday, June 19, 11 a.m. to 4 p.m. Bring your dog to Yountville Community Center Plaza. Meet Guy Buffet and view his collection of canine images or commission him to paint your pet at promotional prices. Stay for the 3 p.m. two-legged complimentary Yappy Hour. There will be doggie treat bags with canine favorites.

• Live in the Gallery with Guy Buffet begins June 20. The Gallery is open Monday to Friday from 9 a.m. to 5 p.m. as well as select evenings and weekends. Email inquire@guybuffet.con1or visit www.yountville.arts.com for specific dates and times or to make an appointment. Gallery show dates for this collection are Aug.14 through closing on Sept. 10.

Walk to, drive to or ride your bike to the Gallery to view Buffet's new Tour de Yountville collection, including his new giclee edition titled "Tour de Yountville." Gallery show dates for this collection are July 17 through Aug. 13.

• Napa Valley Buffet, Saturday, Aug. 14, 11 a.m. to 4 p.m. Meet Buffet and chat about his dual love of France and Yountville while viewing his art. At 3 p.m., Buffet will donate his original Art, Sip & Stroll watercolor painting to the town of Yountville. Mayor John Dunbar will present Buffet with a proclamation from the Yountville Town Council for contributions to and partnership with the town.

James Wan has revealed the full title for ‘Aquaman 2’

James Wan has revealed the full title for ‘Aquaman 2’

One of the first live events of the year in the Napa Valley, Yountville Arts' ninth annual Art, Sip & Stroll takes place on Saturday, June…

Among the artists booths at Yountville Art, Sip & Stroll will be Scraps of Hope, selling the art they make from refugee lifejackets to raise funds for refugee camps in Greece.

Guests explore Yountville and meet artists at the annual Arts, Sip & Stroll. Cancelled in 2020, it returns this year on June 12.

New tasting pavilions will be serving tastes of local wines for ticket holders.