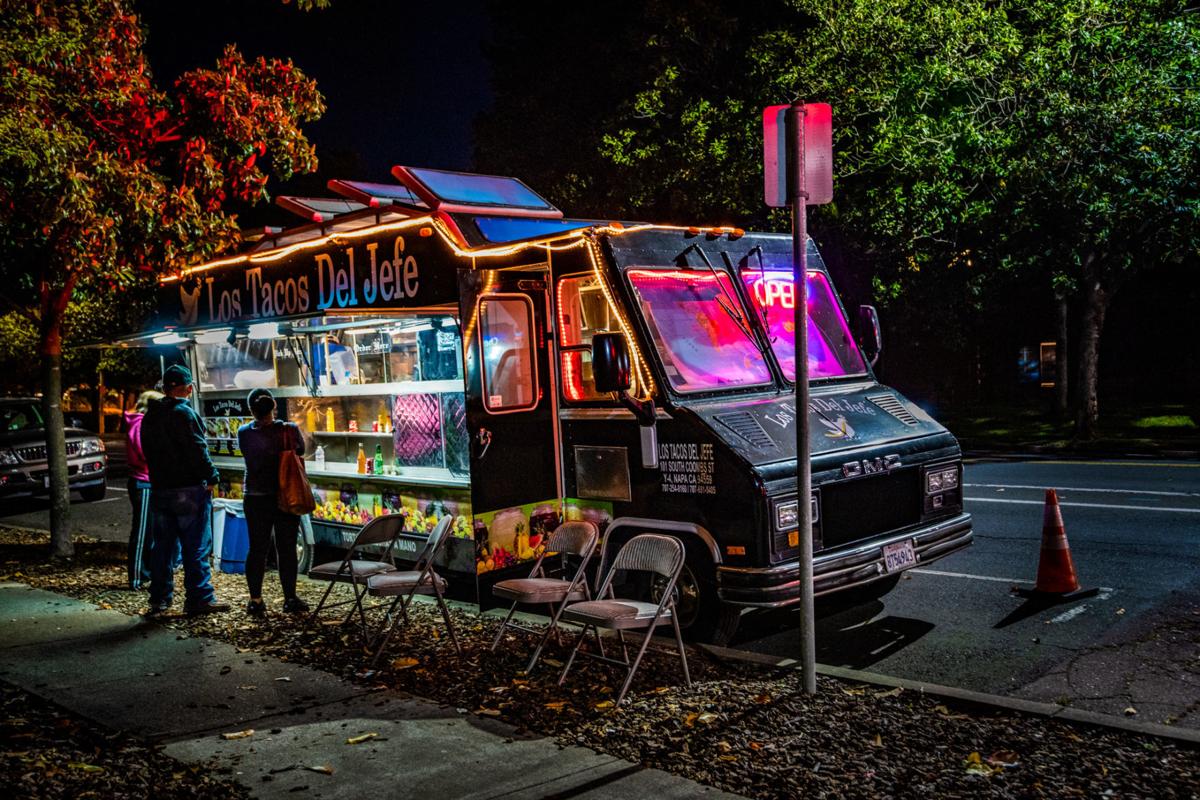 A study of a taco truck by photographer Geoff Hansen is at the Napa Library during January. 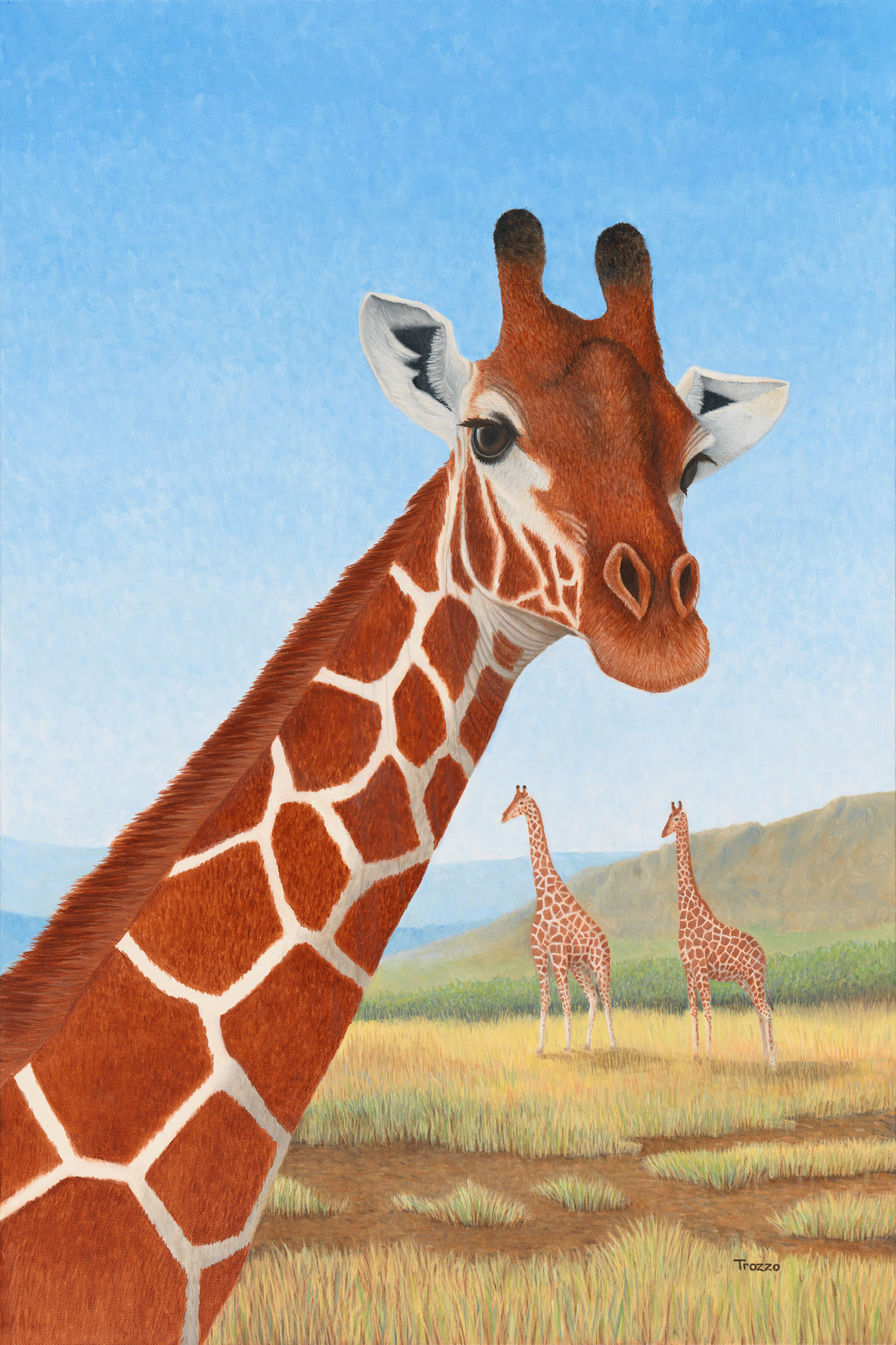 "G is for Giraffe" by Mike Trozzo. 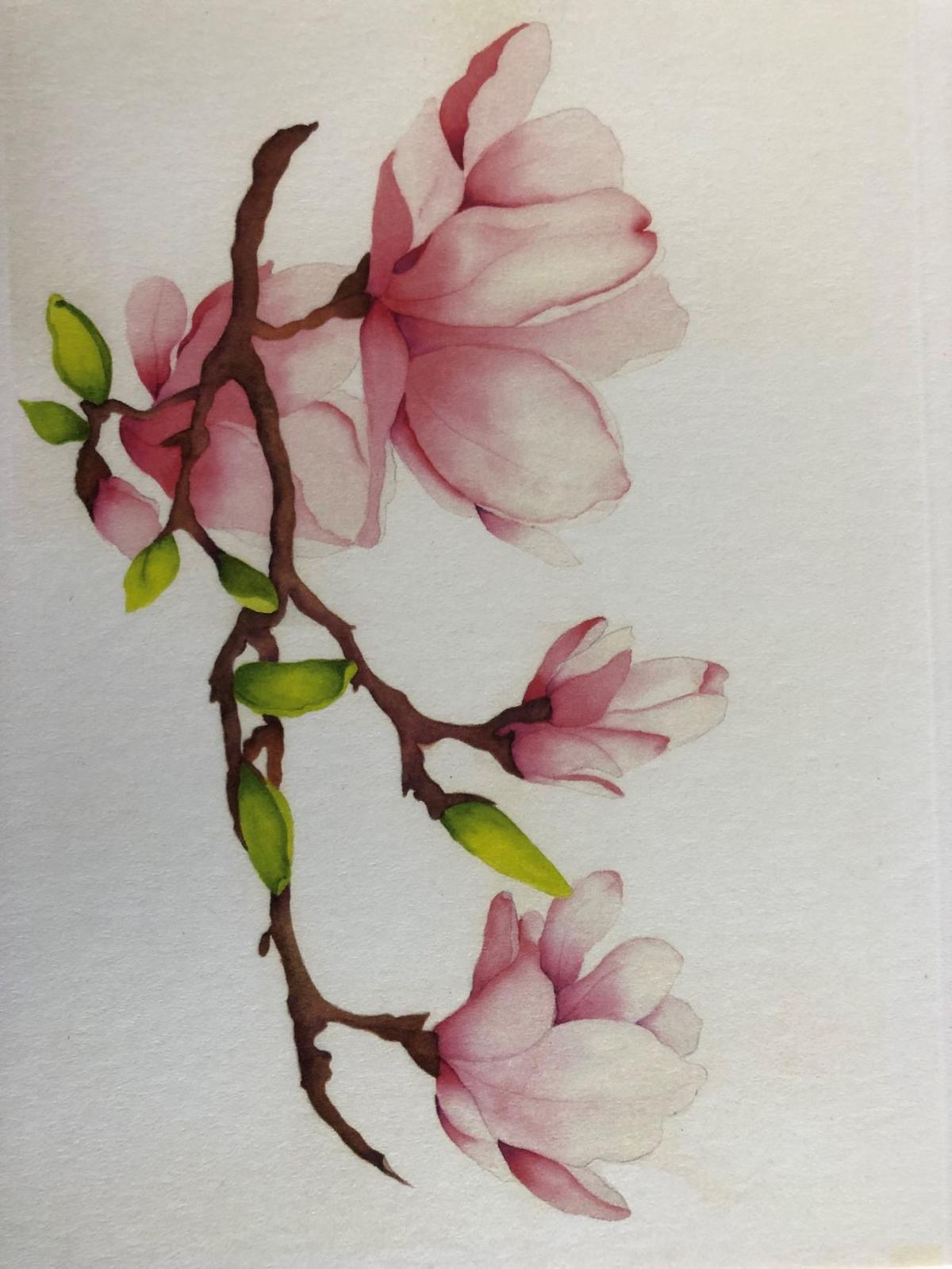 Works by Jeanne Dillon are at the Napa Library in January. 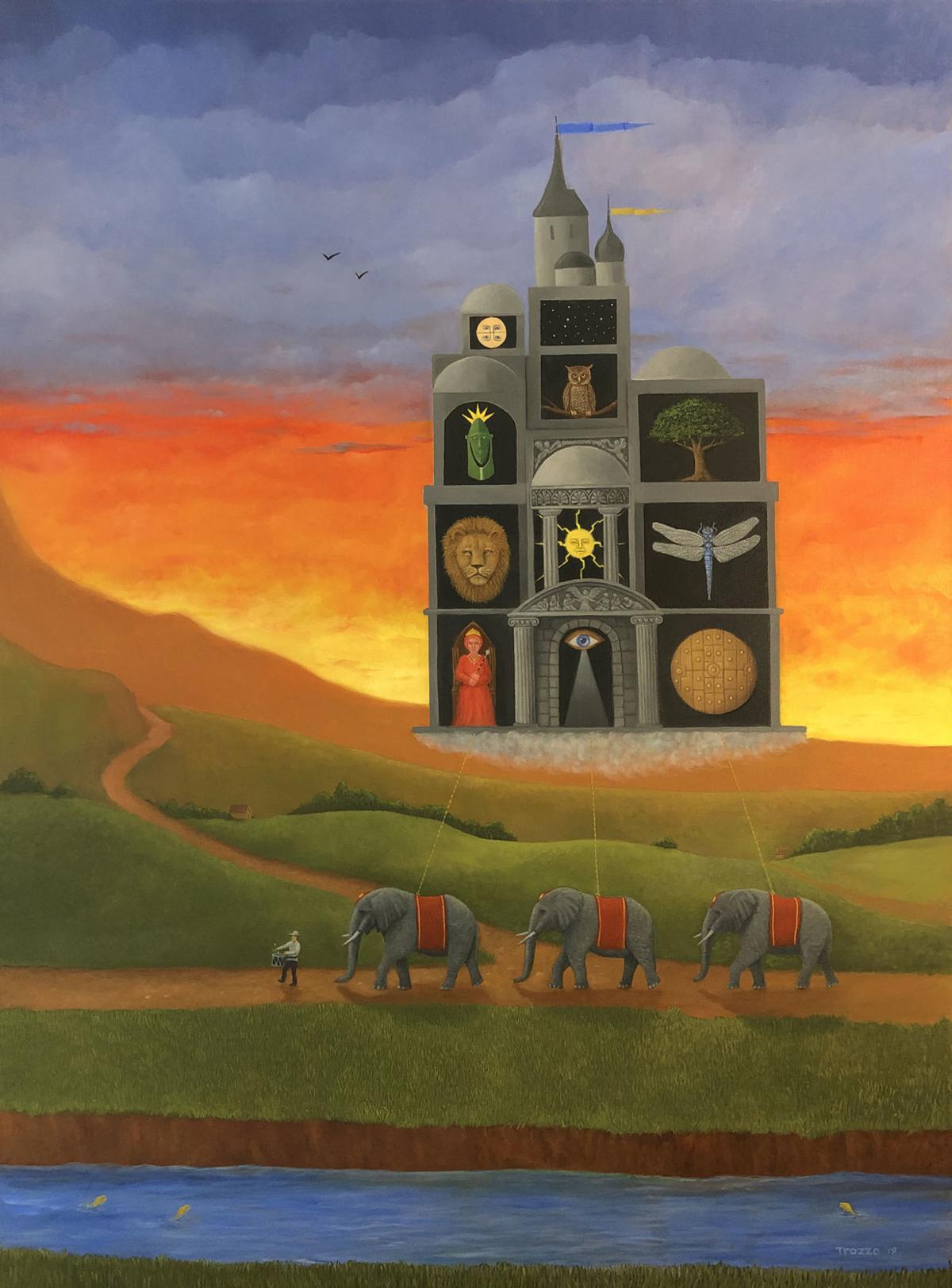 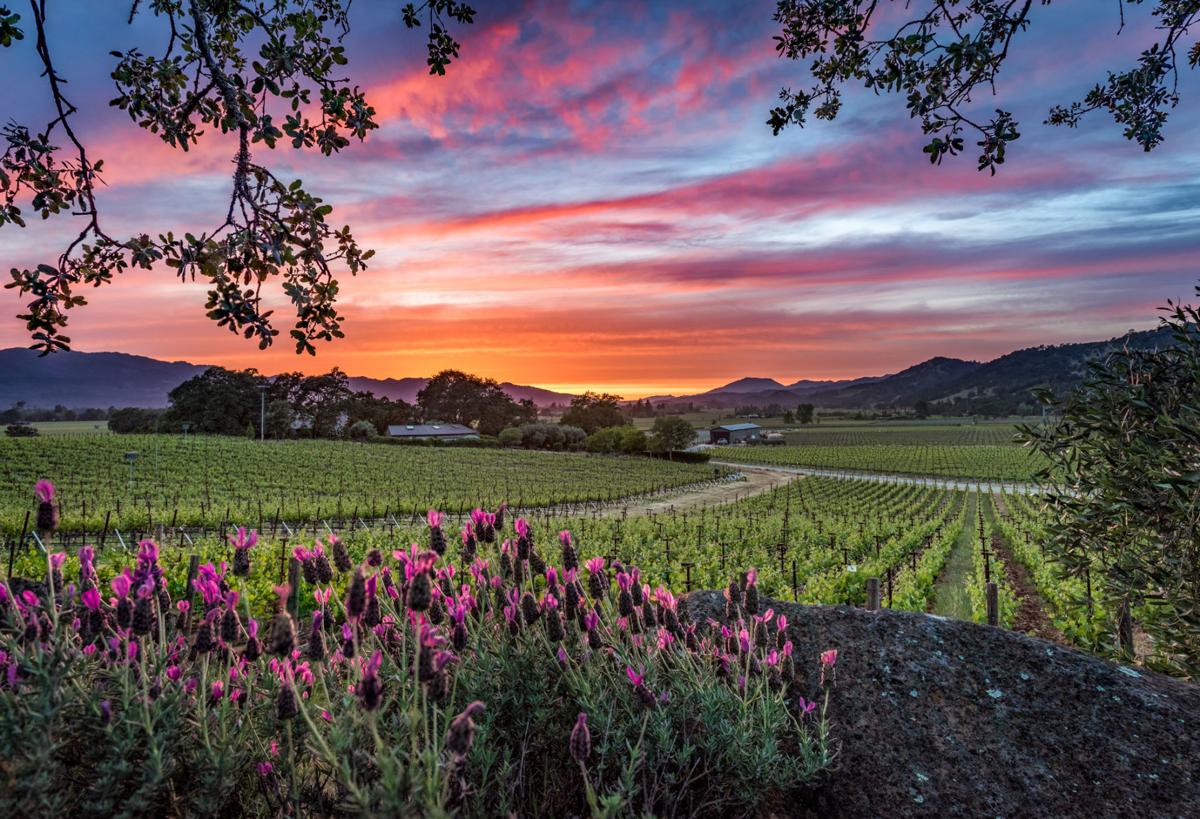 A study of a taco truck by photographer Geoff Hansen is at the Napa Library during January.

"G is for Giraffe" by Mike Trozzo.

Works by Jeanne Dillon are at the Napa Library in January.

All six artists will share their process at a wine and hors d’oeuvres reception for their exhibit on Friday, Jan.10, from 6 to 7:30 p.m. An artist talk, where each artist speaks for five minutes, is scheduled for 6:30 p.m. Admission is free.

Inside, near the entrance door, a large painting by Frank Trozzo of whales is realistic enough to inspire a visitor to imagine swimming alongside the mother whale and her calf in the deep blue ocean.

Next to the painting of the whales is another different painting by the same artist. Instead of a canvas filled with the cool shades of water, the piece celebrates almost every color in an oil on canvas that some viewers study for a long time.

“This painting (Mind Palace), is not necessarily a new direction, but a return to a surreal style that I have painted for years,” Trozzo said. “It is the largest painting that I’ve done in that style. I have not shown most of my surreal work. Perhaps I will in the future.”

“A Mind Palace’ is a method of memory,” Trozzo explained. “In past ages knowledge was orally transmitted from generation to generation. As an example, it took 400 years for Homer’s “Iliad” and “The Odyssey” to be written down. People had to remember it word for word. It is one of the ways people remember details,” he continued. “A temple, house or storyline is another. Scholars in the Middle Ages used this method. Sherlock Holmes kept his information organized this way.”

Trozzo, who has been painting and drawing since childhood, received his Bachelor of Arts degree in art and education from Virginia Wesleyan College, and did further studies in metal work, sculpture and jewelry at the University of Maryland, California College of Arts and Crafts and the Fachhochschule fur Gestaltung in Schwabish Gmund, Germany. Throughout the 1980s, he opened jewelry stores in San Francisco and made custom designs in gold and platinum for his clientele. He has been painting full time again since 2014.

“Each part of this painting (Mind Palace) is symbolic,” said Trozzo, who might be prompted to share the meaning of the symbols in his painting this Friday when he and five other artists talk about their art.

Geoff Hansen is a perfectionist when it comes to photography. Whether landscapes or a scene with people standing in front of a brightly lit taco truck at night, Hansen’s photographs grab the viewer’s attention. Most of his photos are printed on metal. One of his photos, printed on canvas, highlighting the beauty of English lavender in the foreground looks more like a painting than a photo.

Since retiring from a 40-year career in law, Hansen has committed himself to professional landscape photography, featuring the “sublime beauty” of the Napa Valley and surrounding areas as well as places he and his wife discover on their travels.

Hansen’s photography is displayed at permanent exhibits at Art Gallery Napa Valley and Beneserre Vineyards and appears in private collections throughout the United States and Europe.

“In my work, I endeavor to highlight the changing seasons in the valley, and the stages of development of the grapes in the vineyards from the bud break through harvest.”

Lis MacDonald has come back to working with watercolors, which has been her “favorite medium” for the last 20 years. Though she also has worked successfully with acrylics, casein, pastels and oils, her art in this exhibit demonstrates her masterful talent with watercolor.

“I veered off to try something new and pursued alcohol inks on Yupo paper for about two or three years,” MacDonald said. “I love the translucency and luminosity that you can only achieve with watercolors. My motivation was to paint better cityscapes rather than just landscapes and tell stories of people milling about.”

Nick Cann, a fifth generation Californian from Palo Alto, who now lives in Napa has an impressive background as a professional artist. He worked as a set illustrator for MGM studios then freelanced as a graphic designer in Los Angeles for 29 years.

Cann has written diaries for “The Last Samurai.” Hotels, airports, department stores and restaurants across America have commissioned his murals. Inspired by architecture and whimsy, Cann creates line work in pen and ink. His work is often quite detailed.

One of his pieces in this exhibit was inspired by “The Nutcracker” ballet. Another one, “Colored People,” resulted from encouraging people to select the color in which they wanted to appear.

Laurie Marchessault, who has two powerful portraits as well as several still life paintings in the exhibit, describes herself as “somewhat of a modernist who paints in the manner of the revered Old Masters.” Her techniques include an “academic approach to composition, a precise tonal underpainting and a layering of oil paint mixed with an oil medium called glazing.

“In this process there is a genuine unfolding of form and atmosphere. The painting becomes three-dimensional, and as I work, I am always searching for treasures of exquisite color, light and luminosity to present themselves,” Marchessault wrote.

Jeanne Dillon’s work is colorful and detailed. She began painting in 1980 when she took an oil painting class. Since then, she has experimented with various media and found “her true artistic voice in watercolor.” Her forte is in flowers and natural outdoor scenic views.

Dillon has a strong appreciation for the camaraderie and support of other local artists and volunteers much of her time to many art related endeavors.

“The Napa Art Association is a great association that encourages all artists and opens many doors for local artists. Each year, proceeds from the sale of our art, goes back to the community in the form of scholarship to all the local high schools. I’ve been a member for over 20 years and feel so blessed to share with so many local artists,” Dillon said.

An artist's World War I series at the Napa Library

Like looking through an old photo album lovingly put together by a long deceased relative, the art on the walls of the Napa Main Library this …