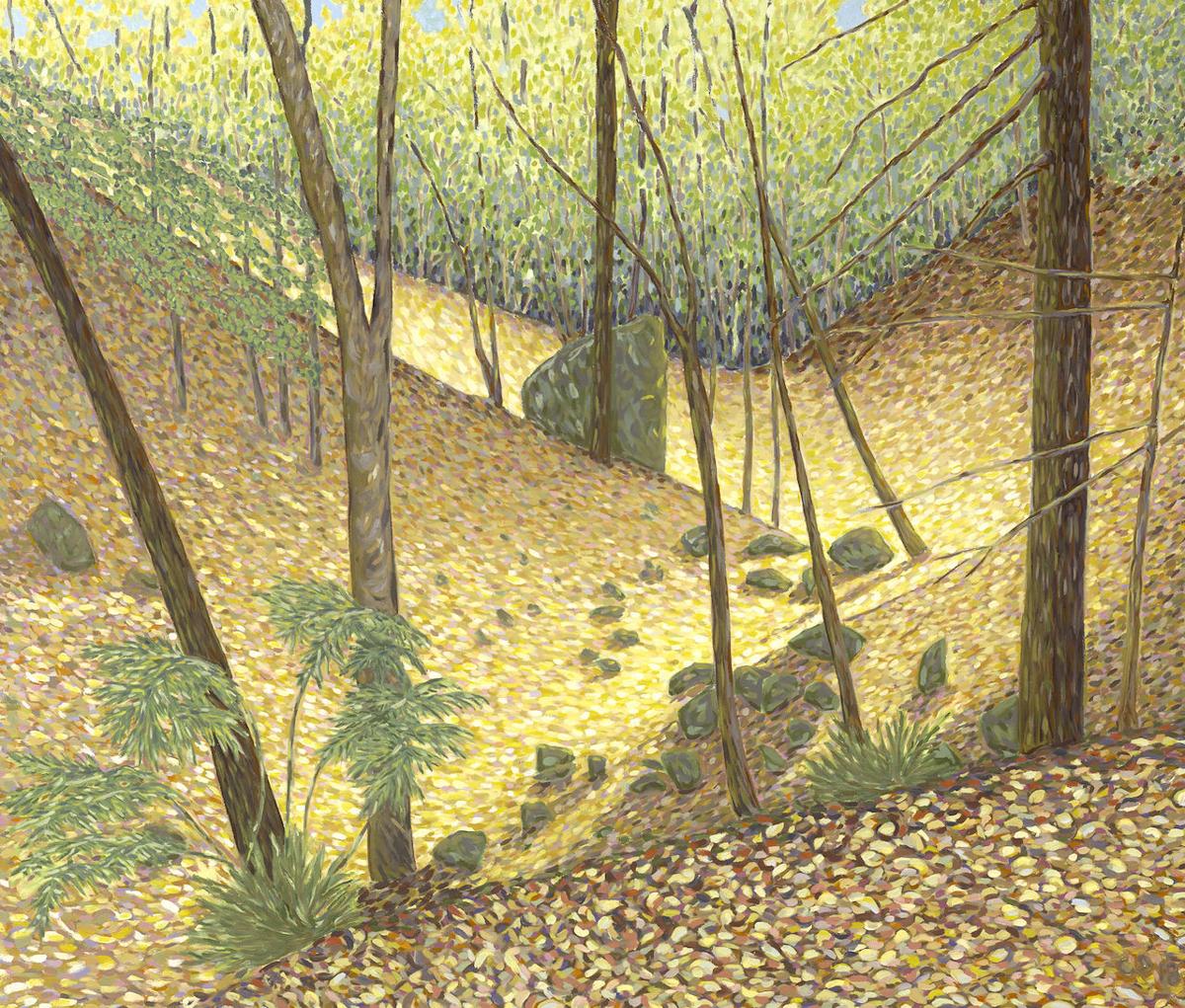 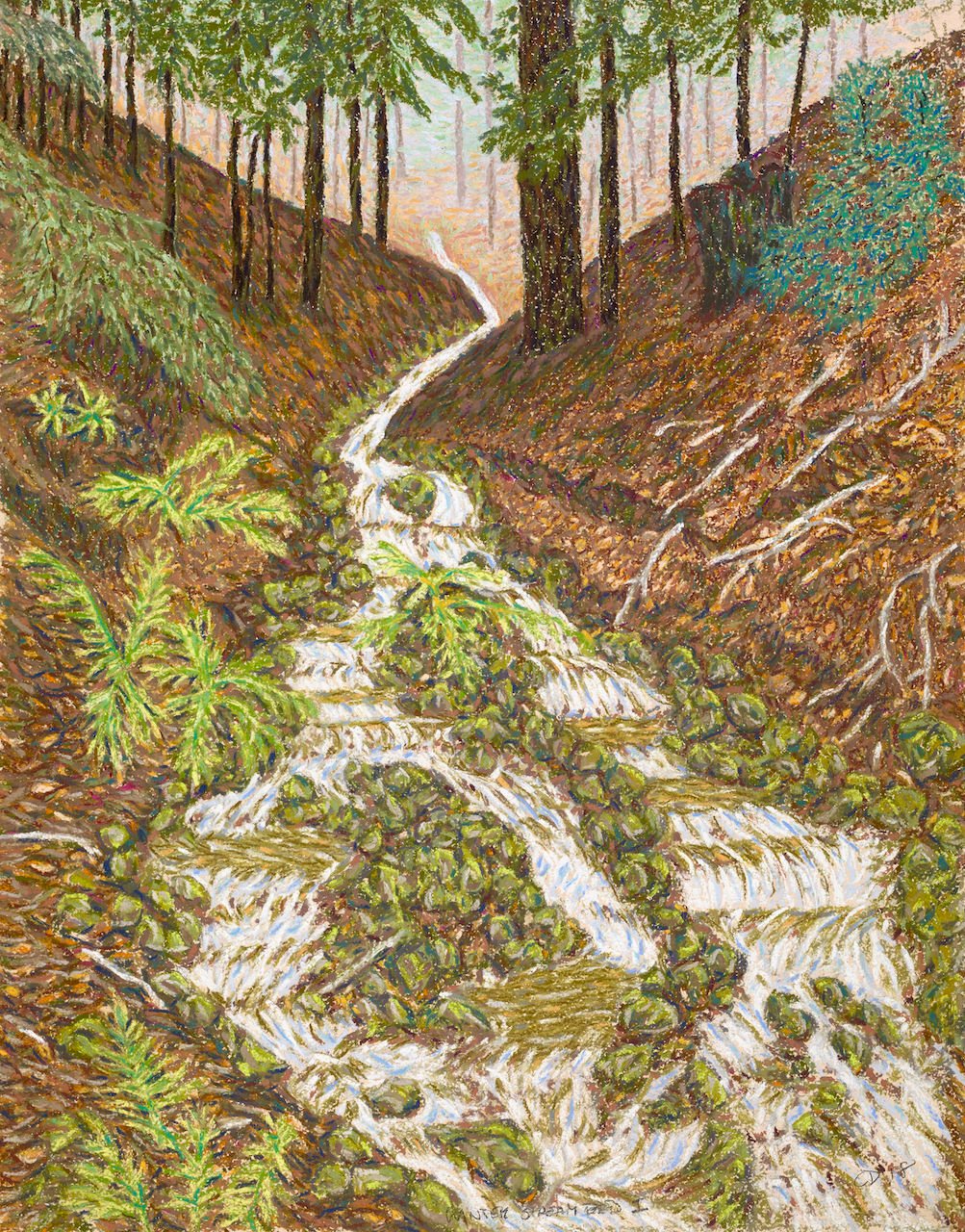 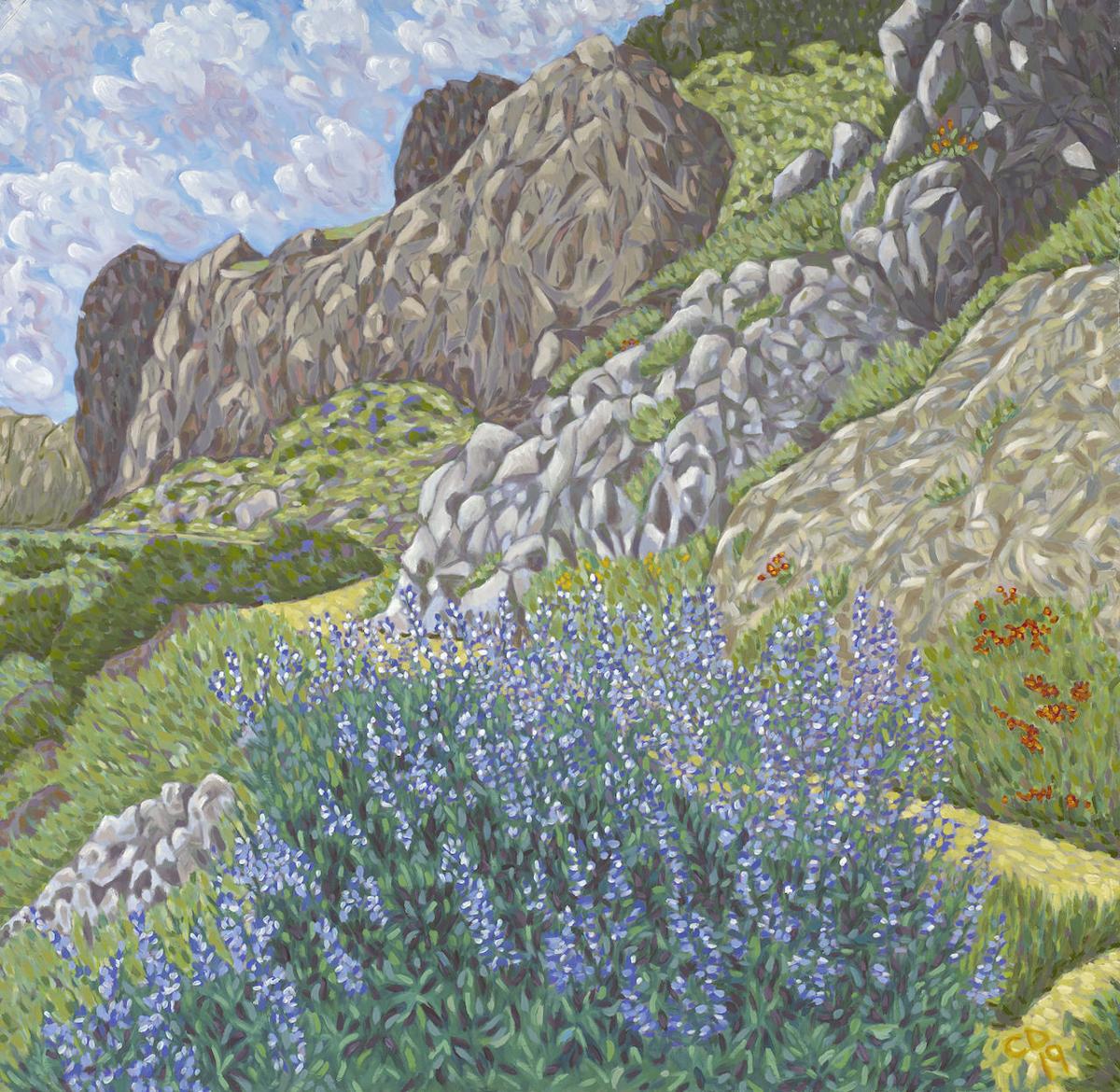 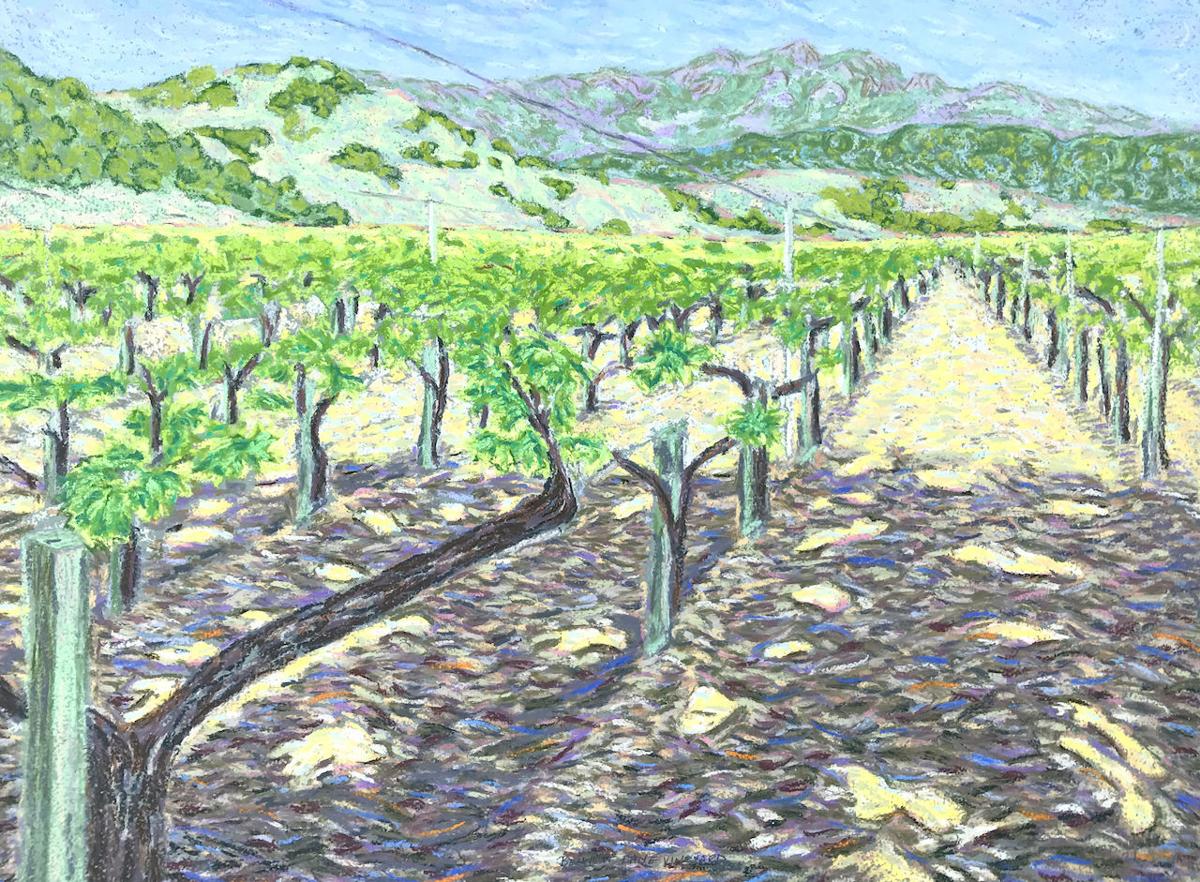 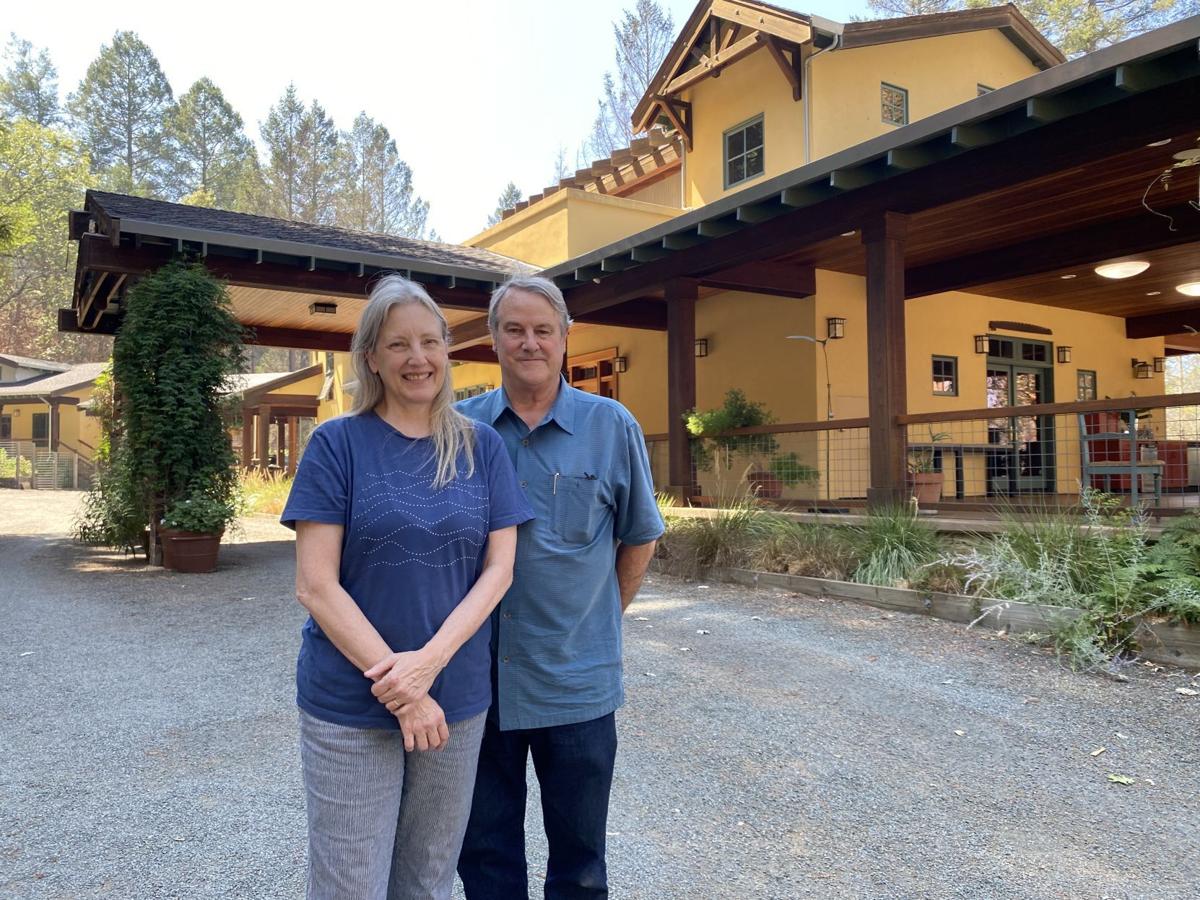 Driving up the steep and winding Diamond Mountain Road to reach Charles de Limur’s art studio at the top of the mountain overlooking Calistoga last week was like stepping into one of his paintings.

Through the alchemy of oils and pastels on a variety of surfaces this versatile artist reveals the beauty of Napa Valley in his landscape paintings while suggesting the magic hidden within it.

At my destination, blackened bark on still green fir trees near the artist’s home and studio gave silent testimony to last fall’s fire.

“The fire was around us on three sides but never touched us, de Limur said. “It took out half of our garden gate and then stopped.”

“It was very frightening. We thought we’d lose everything,” he said. “I was here about 45 minutes before the fire came through – trying to figure out a way to save the house.”

De Limur and his wife Gretchen are now “basically managing the forest” on their 40-acre property. Many of the trees are coming down and they are getting rid of all the underbrush.

Inside the couple’s home, which he designed and built 20 years ago, a variety of artwork abounds - paintings by famous artists mingle with those that the couple’s two grown children created when they were young. As we walk through their home to the studio, de Limur points to a gigantic painting.

“Gretchen’s dad, Willard Bond, did this one,” he said. “He was a famous marine artist.”

Considered the “number one painter of sailing action in the world,” Willard Bond’s posters, prints and his original oil and watercolor earned him a “huge following” among sailing enthusiasts. As a famous yachting artist Bond was given a half-page obituary in the New York Times in 2012.

Gretchen de Limur smiled at the coincidence of her father and her husband both being artists. “I found Charley very appealing because I knew what it was like to live with an artist,” she said.

Her husband, Charles de Limur has exhibited in solo and group shows in San Francisco and Washington, DC, as well as the Napa Valley Museum and the Napa Valley Open Studios.

His work is on view at the Napa Library during September.

Next door to their home is the spacious art studio where de Limur spends eight hours a day. Inside, the studio is filled with the landscapes he is known for, as well as his seascapes, urban views and still life paintings.

In addition, there are block prints of birds, animals and insects and something unexpected – an unusual ongoing box series.

“This is my disaster box series,” he said, pointing to small boxes that open to reveal multilayers of imagery that were originally inspired by the 2017 Wine Country fires.

“Each one has a theme,” he continued. “When you open this one, ‘Where There is Smoke there is Fire,’ you see how the forest looked before.”

Among other disaster boxes were themes of volcano, tsunami and Covid.

While selecting paintings to hang in his show at the library, de Limur talked about his artistic influences.

San Francisco to Paris and back

“Growing up in Paris and Europe, with first-hand exposure to the Impressionists and Pointillism, as well as later exposure to the California Colorists movement, has all had a lasting influence,” he said.

He graduated from Oberlin College with a Bachelor of Fine Arts degree, where he concentrated on art, theater and communications.

“My influences are very much from the 19th century,” de Limur said. “Camile Pissarro, Edward Vuillard and Francis Picabia - as a painter mid-career before he turned his attention to Da-Da – are my most influential painters.”

The artist Robert Stark at the Susquehannah Studio in Uniondale, Pennsylvania has been – and still is – a strong influence. Stark has been his mentor and friend since 1978. For a time, de Limur was an artist in residence at Art Exchange Gallery and Susquehannah Studio.

“The first painting I ever bought was a Robert Stark painting,” he said. “I have a lot of his work at home. Robert constantly reinvents himself.”

During the 1980s, de Limur was the owner and master printer for de Limur Studios in San Francisco, a fine art and commercial silkscreen studio specializing in the production of limited edition art prints. He also owned and operated a silk-screening studio in Washington, DC.

Now, after years of working in silkscreen for his own images and collaborating with other artists to create fine art silkscreens of their work, de Limur enjoys the “simpler and more direct process of carving and printing” small-format block print.

“The challenges are completely different from the layered color work of the paintings and oil pastels,” he said. “This is about carving and texture and creating feeling with just a few gestures.”

Sometimes de Limur’s landscapes begin “en plein air,” outdoors on location and are completed in his studio. At other times he takes photos to capture the images to bring back to his studio and creates the painting entirely there.

“I look for scenes with strong compositions and texture,” he said. “I often return to the same subject several times in different seasons to explore variations of light, angle, weather conditions and water flow.

“I usually work slowly, using many multiple layers of color to achieve depth and aliveness. I feel the colors vibrate, first entering the eye, then the heart of the viewer.

“Sometimes when I’m working it feels as though there’s a struggle but at other times, I realize I’ve been standing in front of a painting for five hours,” he said. “I think about the work for hours before doing it.”

Using Douglas fir, which is plentiful in the forest around his studio, de Limur builds his own frames for his paintings. He appreciates the warm golden reddish color of this fir which “subtly darkens after several years.”

At first, he started building his own frames “out of necessity” to protect and archive his artwork but it soon became an “integral” part of his work.

“I want frames that do not seem mass-produced but have a handcrafted feel and a simplicity, like one sees in Shaker furniture,” he said. “Over the years I have experimented and changed my framing methods, but have always used acid-free, archival tapes and mat boards, and continue to cut the wood stock myself and build individual frames for each piece.”

He uses multiple coats of Tung oil, which he said dries more easily than varnish, and gives a “soft, sensual, tactile feel to the frame.”

De Limur relishes working in his studio and foresees living in his Diamond Mountain home for many years. He and his wife love their mountain community and, along with their neighbors, are committed to managing the forest to keep it safe from fire.

This involves logging burned trees to be salvaged for lumber, he explained. Once that is done, they will plant native trees as opposed to nonnative trees that grew as a result of improper forest management from previous logging operations dating back to 1906 when this area was logged to rebuild parts of San Francisco.

Throughout September de Limur’s art can be viewed at the Napa Library. As part of the Arts In The Library program, a reception and an artist talk are scheduled for Friday, Sept. 10, from 6:15 to 7:30 p.m. at the Napa Library. As a precautionary measure for an indoor event, guests need to preregister at https://bit.ly/3s5m8eW. If it is necessary to cancel because of COVID, those who have registered will be notified.

Food and wine will not be served at this reception. However, water and juice will be available.

Napa County Sheriff's officers made arrests at Lake Berryessa after finding heroin in a car and a loaded rifle on a jet ski.

Aly Raisman opens up about sexual abuse in TV special

Aly Raisman opens up about sexual abuse in TV special

'Her Story in America' opens at the White Barn

“Her Story in America,” a tribute to women who have been influential in helping our country move forward politically, socially and culturally will be at the the White Barn in St. Helena on Friday, Aug. 27 through Sunday, Aug. 29.

Art in the Library: 'A Conversation with Paper' from a global artist

Gerald Huth’s collage work can be seen this month at the Napa Library in a show titled “A Conversation with Paper,” which showcases 29 works made from papers he found on travels around the world.

"Angels Unawares," a sculpture originally commissioned by Pope Francis on the theme of immigration and refugees, is making a stop in Napa as part of a national tour. It's the second casting of the original, now in Vatican.

Renee Austin was planning to paint “beautiful flowers, landscapes and abstracts” but she changed her mind. Instead she created works for “Crisis: Mother Earth,” showing this month at the Napa Library.

Open Studios continues this weekend throughout the Napa Valley