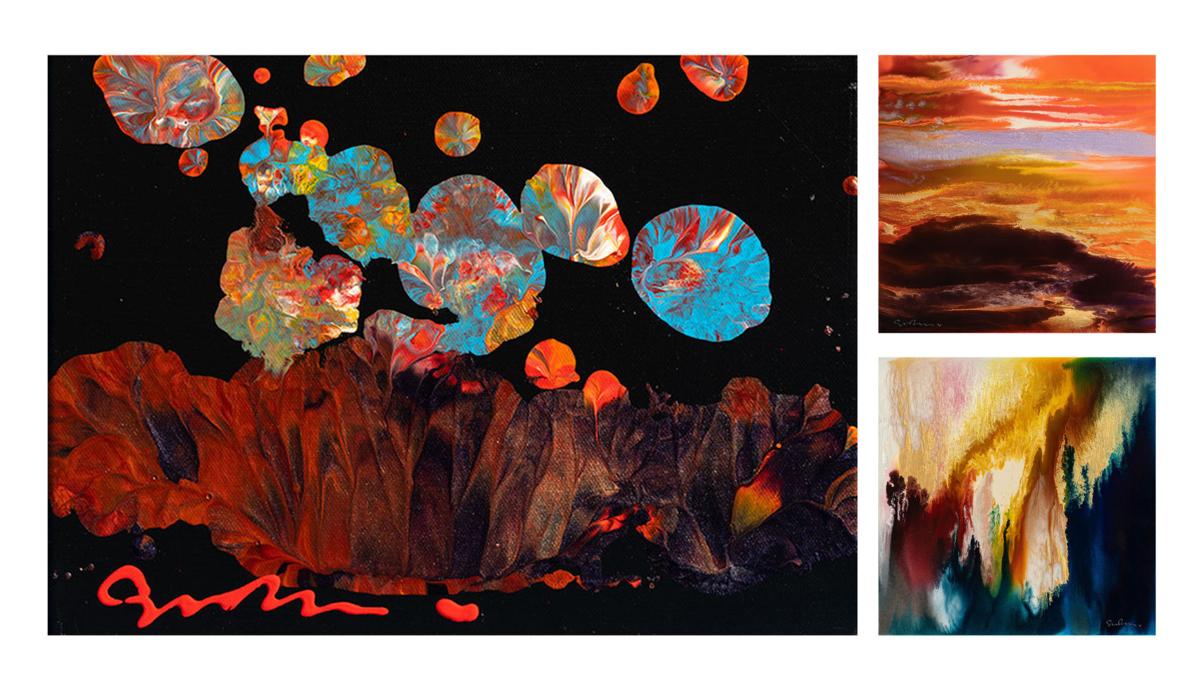 Works from Simon Bull, clockwise from left, "Beauty From Ashes," "Rivers of Gold" and "Everlasting Hills." 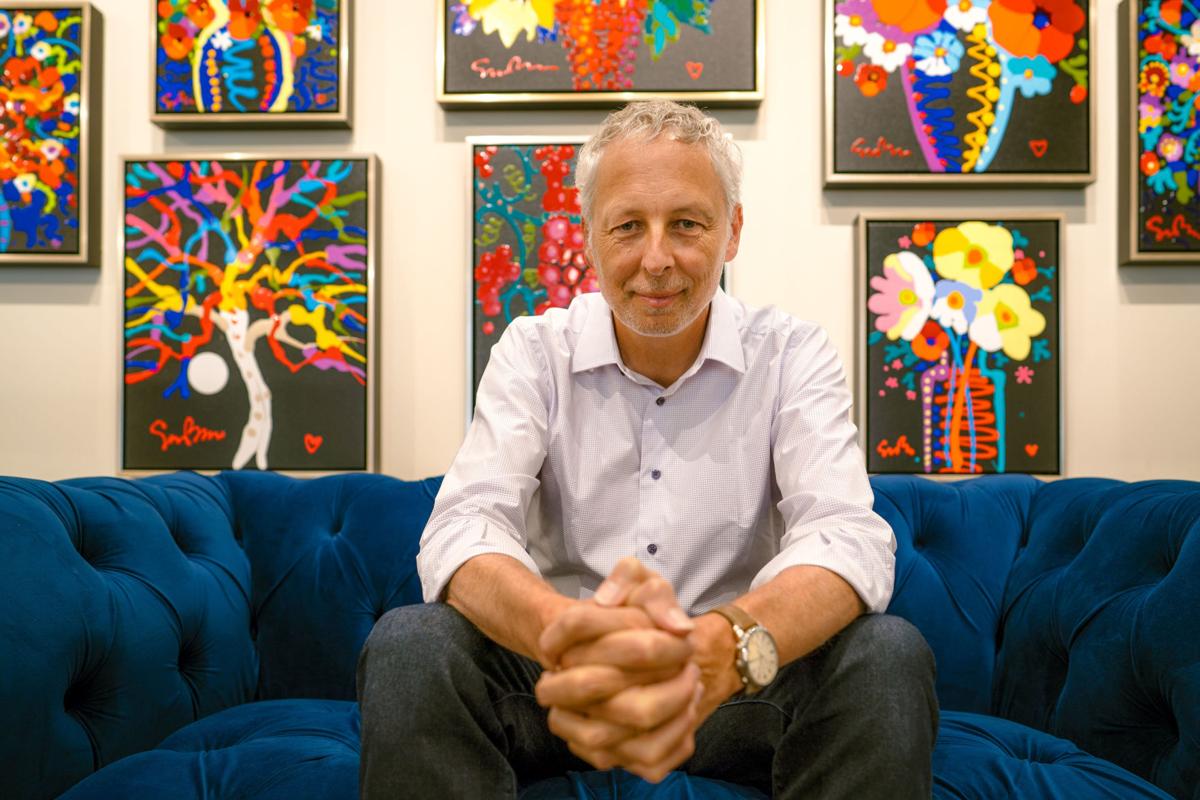 Works by artist Simon Bull are at the Meuse Gallery in St. Helena through Dec. 31. 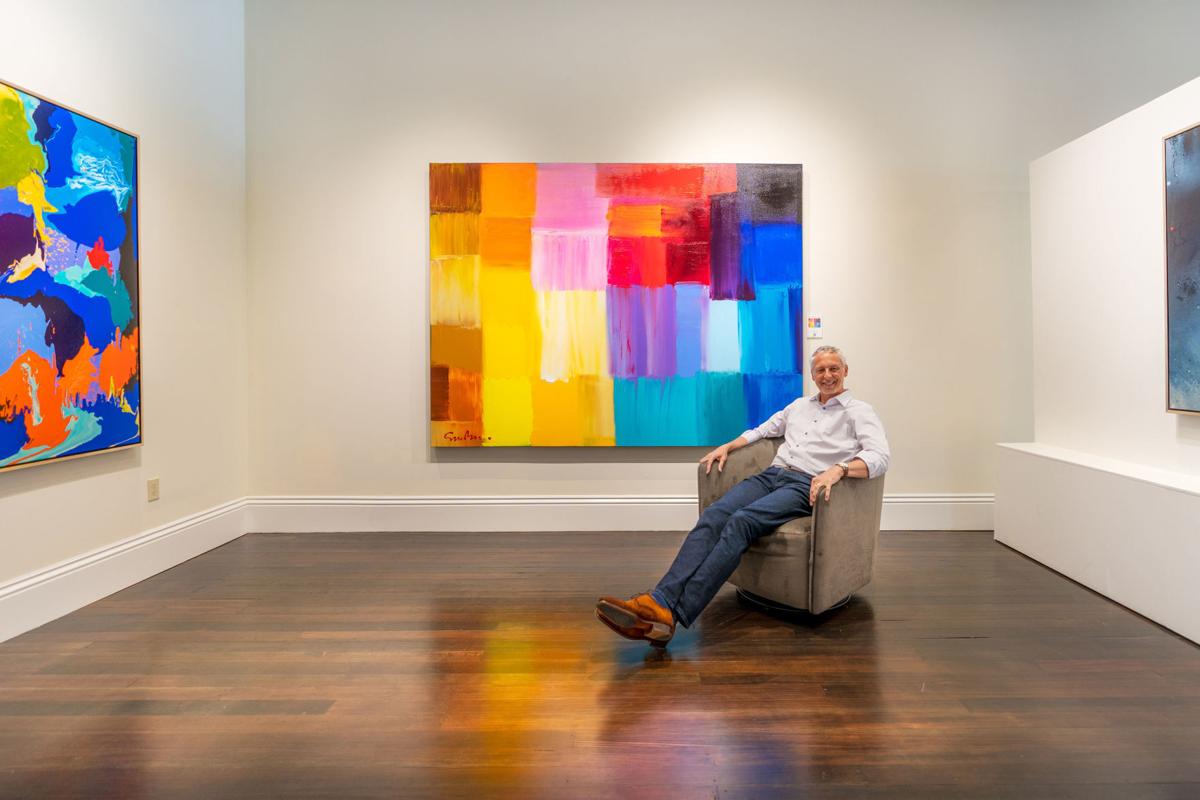 Steven Bull with his art.

Internationally recognized artist Simon Bull’s interpretation of the recent fires in and around the Napa Valley will be on display at his St. Helena Meuse Gallery from Nov. 14 to Dec. 31, with a reception on Saturday, Nov. 14, from 4 to 7 p.m. He will donate 15% of all sales from the show to the California Wildfire Relief Fund.

“I felt the need to share what I was witnessing — the immense raw power of fire in sharp juxtaposition with the otherwise beautiful and serene nature of the Napa Valley,” Bull said. “Art has a way of bringing people together and allowing us to remember what is important.”

As many within the region might agree, fires can have that effect on communities, too, allowing them to rally and find ways to support and encourage one another during challenging times.

“The ‘Beauty From Ashes’ collection highlights so many layers of what everyone has been through with the wildfires,” said Kisha Itkin, owner of Theorem Vineyards, who has donated wine for the artist’s reception. “There is so much tragedy and pain, but there is also love and community — and with that our roots run deeper in this place.”

Born and raised in Britain, Bull has had a presence in California for decades and immigrated to the United States in 2003. Besides winning numerous awards and opening his own galleries in Carmel and St. Helena, he has become one of the top-selling artists in the United States and was selected along with fellow artists Thomas Kinkade and Howard Behrens to commemorate the 2002 Salt Lake City Winter Olympics, the 2019 National Cherry Blossom Festival in Washington, D.C., and to render boxer Muhammad Ali from 2007 until his death in 2016. In 2009 he was commissioned to paint President Barack Obama.

Bull’s art is often infused with vibrant colors and rooted in the natural world.

“When I was a child I’d go into the garden and sketch everything I could see,” he said. “I’d sit there for hours sketching flowers, weeds, the play of light, everything. What I realized was that there is nothing that’s just an isolated thing. Everything is connected, everything has a role.”

Bull went on to explain that art has the ability to slow things down enough for people to “see the beauty that they might otherwise miss” in objects and phenomena that are moving fast, like fire.

“The fires that have afflicted this region have devastated lives and been the cause of much suffering,” he said. “And yet there is also something natural, transformative and regenerative within fire.”

It was in 2017, after the Tubbs Fire and Atlas Peak Fires struck the region, that Bull first became aware of the Napa Valley.

“A lot more people were coming into our Carmel Gallery that year,” he said, “and when I asked why they’d often say that they’d originally intended to visit the Napa Valley, but because of the fires they chose Carmel instead.”

When he and his family visited the valley they fell in love with the beauty and natural environment that differed dramatically from the often “sharp and dry” elements of the Central Coast in contrast to the “soft and fluid” elements of the Napa Valley.

“Art is universal and colors can evoke a physical response,” Bull said. “Art also should provoke questions from the viewer. What is this saying to me? It should surprise and delight, yes, but it should also reveal its secrets over time, and in this way painting — and visual art in general —can help us truly understand our deepest connections.”

“I felt the need to share what I was witnessing — the immense raw power of fire in sharp juxtaposition with the otherwise beautiful and serene nature of the Napa Valley.” Simon Bull

“I felt the need to share what I was witnessing — the immense raw power of fire in sharp juxtaposition with the otherwise beautiful and serene nature of the Napa Valley."

Movies in a Minute: "Raya and the Last Dragon"

The 5 best Netflix originals coming out in March

The 5 best Netflix originals coming out in March

'Tested by Fire' : Works by Tim Carl opens a new series at the Napa Valley Museum

Artist Jessel Miller has kept her Napa gallery going for 35 years, supporting other artists and creating her own works. Here is how she has succeeded through difficult times.

Artists in Residence: Diane Pope, an optimist's view of art, nature and the importance of grandchildren

Napa Valley artist Diane Pope has been finding ways to stay creative during the pandemic.

Burn scars from the Glass Fire on Spring Mountain Road in Napa County.

With the pandemic, fires, floods, an untenable economic environment for workers and an unwillingness to acknowledge the harrowing times, the Napa Valley wine industry is increasingly coming face to face with the challenge to survive.

Tim Carl, Local Tastes: The future of restaurants in Napa Valley and beyond

Those food-service companies that do survive to reopen in 2021 — along with their customers — will confront a culinary landscape that is fundamentally different from years past.

Works from Simon Bull, clockwise from left, "Beauty From Ashes," "Rivers of Gold" and "Everlasting Hills."

Works by artist Simon Bull are at the Meuse Gallery in St. Helena through Dec. 31.

Steven Bull with his art.