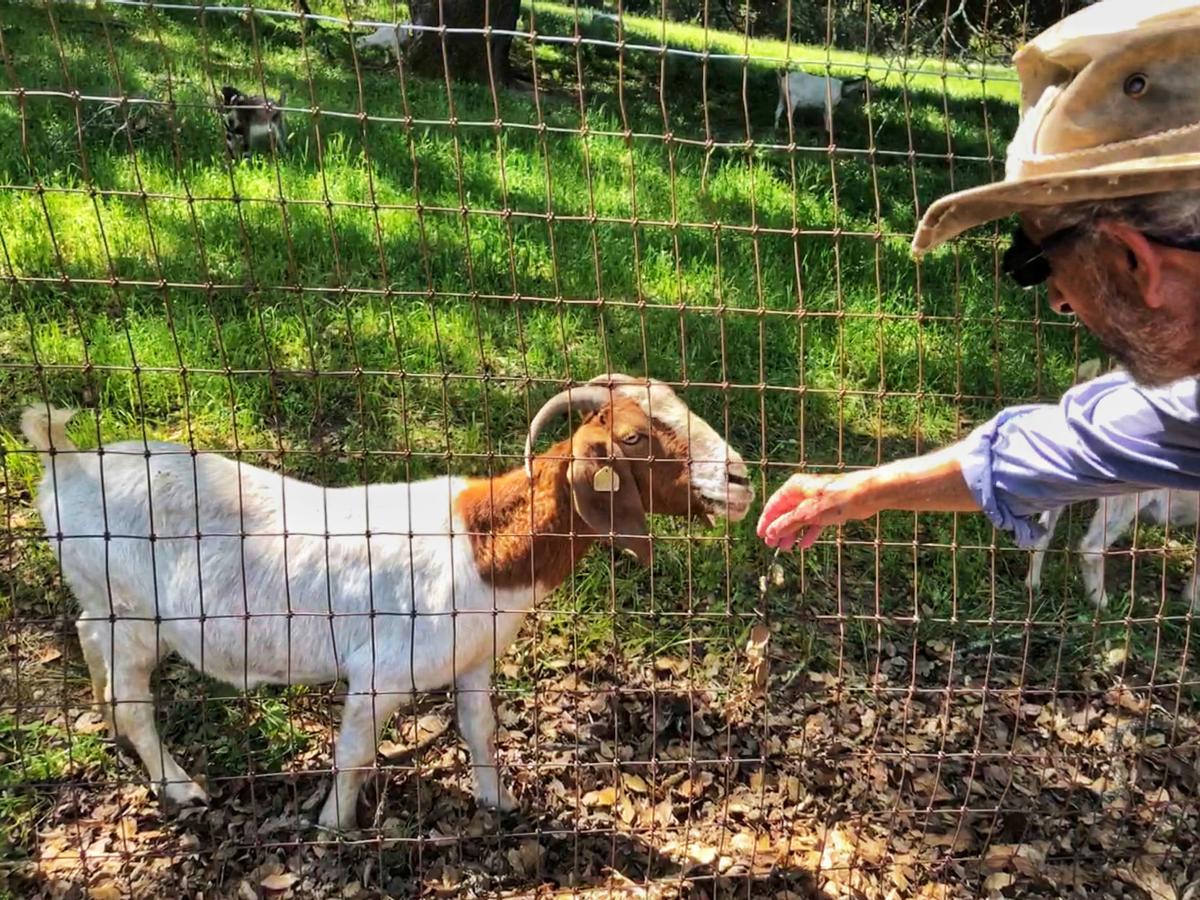 A walk in the neighborhood during shelter at home. 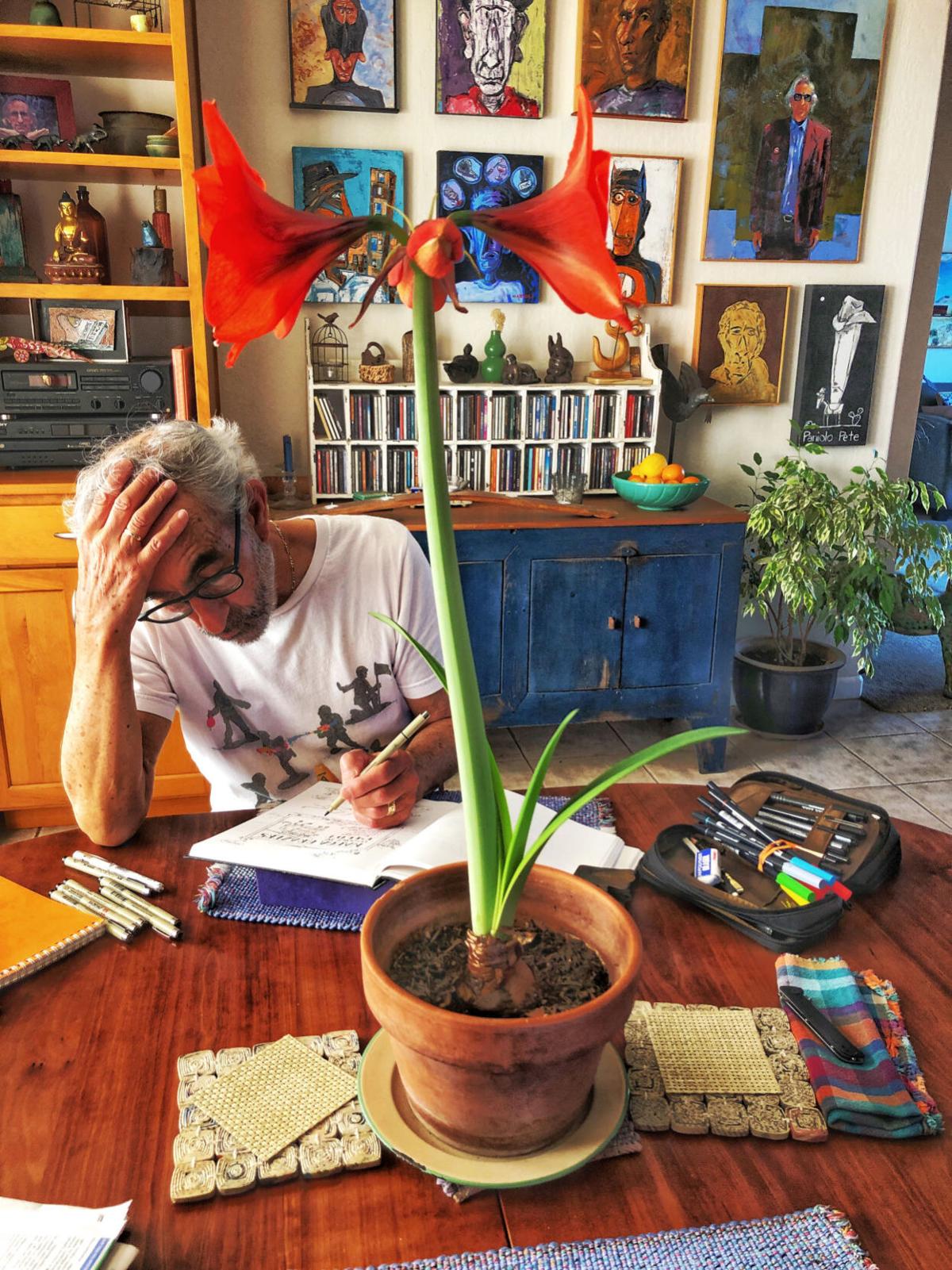 Artist Mark Mattioli works on a cartoon at home. 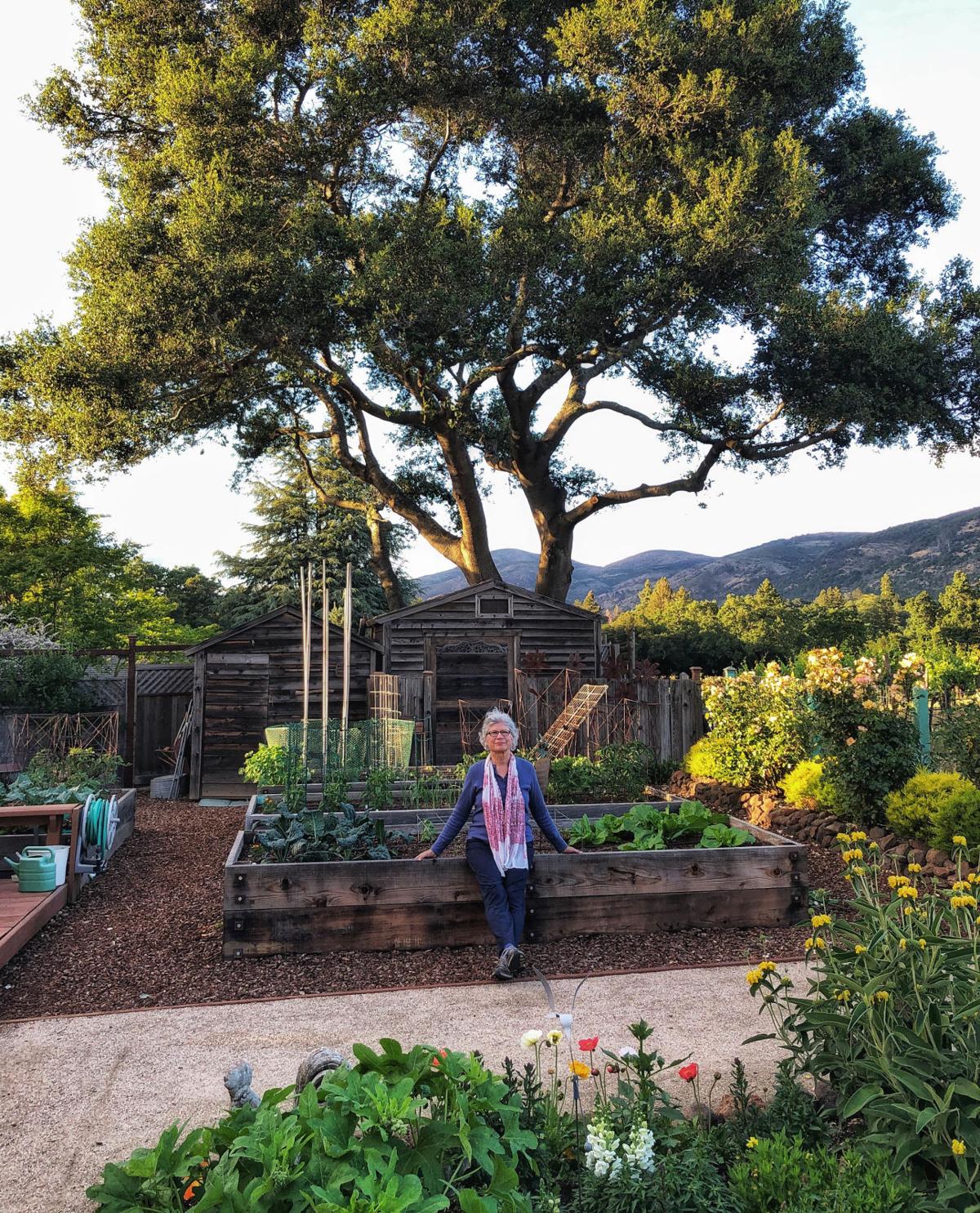 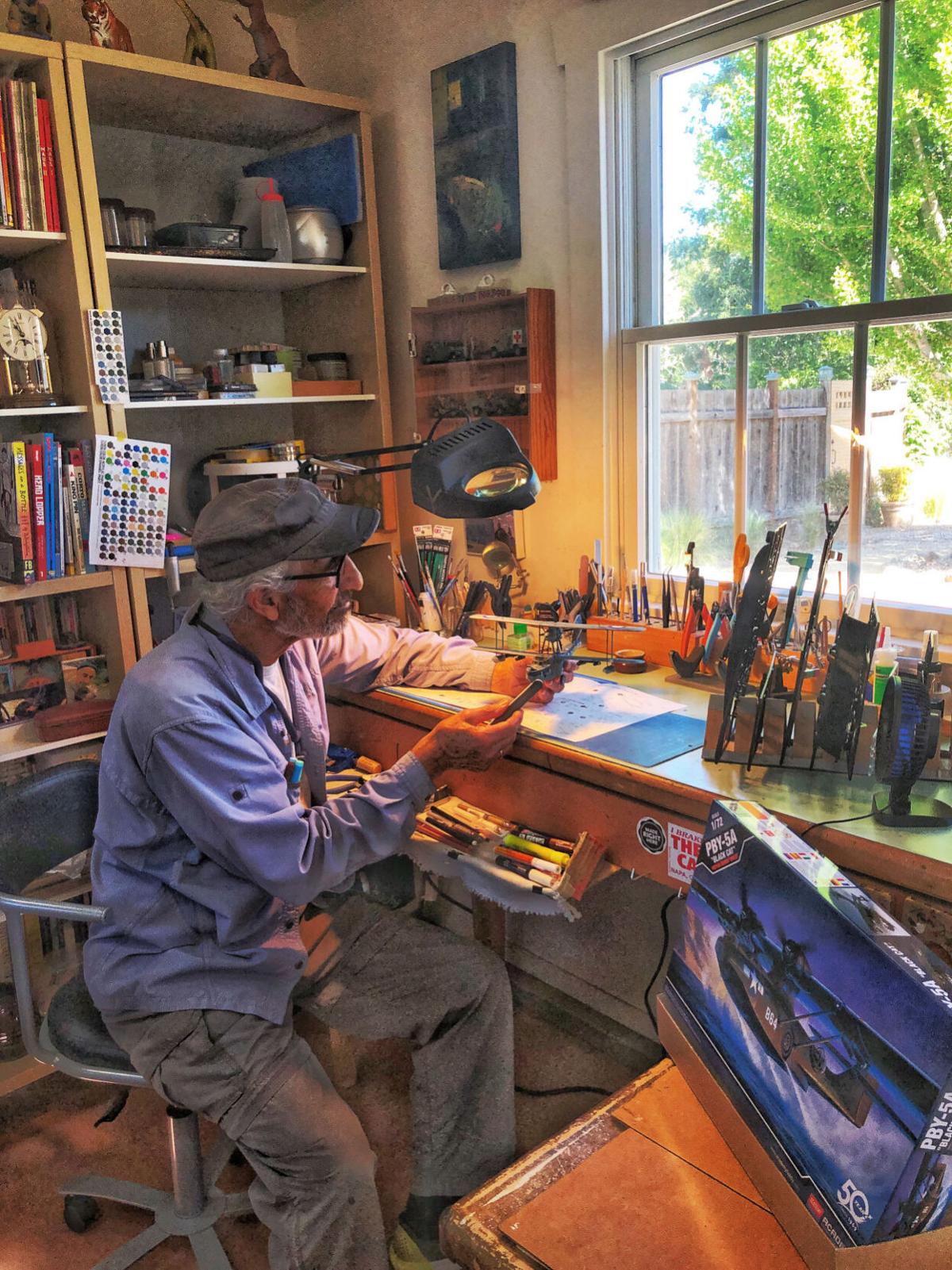 Napa artist Mark Mattioli works on a ship model in his studio.

2020 started strong in the artistic realm for my artist husband, Mark Mattioli, and myself. Each of us participated in a group exhibit at Arts Benicia in January and February.

In February and March, Mark had three pieces in a Cigar Box show at Jessel Gallery; meanwhile, I earned a spot in a juried exhibit at Sebastopol Center for the Arts, which was to run through March.

Both exhibits shuddered to a standstill in mid-March. Mark was able to pick up his boxes recently, but my photograph continues to acquire a dusty patina in a shuttered gallery. Aspirations to submit for other 2020 juried exhibitions have fizzled. The focus of attention has shifted from outward to inward.

With the common exceptions of outings, cultural events, socializing with friends, travel, and hassle-free grocery shopping, our day-to-day existence during this period of shelter in place is not hugely different from pre-virus. The two of us co-exist comfortably at our home, with adjoining studios, in a lovely vineyard location in the Napa Valley. We have in common the luxury of being retired, no longer dependent on jobs and paychecks, for which we are grateful.

When shelter-in-place was first touted in Napa in mid-March, I bristled at the notion that the elderly population—defined as those over 65—were the citizens initially being required to shelter in place (as well as anyone with pre-existing health issues). At age 70 and in good health, I did not consider myself to be elderly! Of course, as we all know, the restrictions changed fairly quickly to include a much broader swath of the local population, as did the notion that we are all in this together as a community.

Reflecting on the last nine weeks or so, I think Mark and I adapted fairly quickly to the isolation, and it wasn’t long before we began to relish having way fewer commitments and way more time for projects at home.

In 2008, just prior to the economic downturn, I had the great good fortune to sell the company I had co-owned for 30 years. Since then, I revived my artistic roots and dove into photography as my chosen medium. Much of my photography has been motivated by travel and excursions.

Over the past eight years, I have designed numerous photography books documenting my adventures and created slide presentations for public viewing. I have been eagerly anticipating a trip to Portugal and Spain this fall with exciting new vistas and cultures to photograph. However, due to the pandemic, these travel plans are completely in limbo.

With the onset of the shelter-in-place period in mid-March, I was hoping to finally have time to hunker down in my home studio to work on various photo projects. To my own surprise, I have not yet begun to do so. Within the larger societal pause mode imposed by the pandemic, I find myself in personal pause mode as well, which I now recognize is full of opportunities to re-examine “shoulds” and re-define what it means to be an artistic and creative individual.

For instance, I have re-discovered my piano, which has co-habited my living room for over 30 years, mostly in silence. It has been a joy and a challenge to begin playing again; I realize what a creative privilege it is to be able to put my fingers to the keys right here at home.

Also, the timing of shelter in place coincided with the arrival of spring. For some 30 years, I’ve mapped out a backyard vegetable garden for eight or nine large raised beds. This year, I was more conscious than ever of the artistry involved in the planning and layout process, and more tolerant of the hard work and tedium involved. There is deep satisfaction in getting plant starts and hundreds of seeds in the ground, and then witnessing the wonder of growth day by day.

I am reminded of the wise old adage to slow down to smell the roses, right here at home. Now that the planting phase is over, I pretty much daily make the rounds of my garden domain, eager to take in all the bounty to be found there. Radishes don’t disappoint with their early arrival; the childlike thrill I feel to pluck radishes fresh from the ground never ceases to amaze me!

For me, the art of photography did not grind to a halt–instead, it has taken a different tack. Almost all the photos I’ve taken during shelter in place have been on my iPhone, either at home or in neighboring areas where Mark and I take walks nearly every day. We venture off property for exercise and a change of view. We are inspired by springtime sights and creatures encountered in the semi-rural ‘hood where we live. I use great apps for post-processing and enhancing images taken on the iPhone, and bought a tablet specifically to improve visibility in honing these skills. The immediacy of this process is fun and rewarding!

There were some major markers for Mark’s art life in 2016. In mid-2016, he halted an extraordinary Doodle-A-Day practice, which he had maintained for four years. Also, in 2016, he fully retired from his sales and production of Mattioli-In-Your-Pocket Guides, which had earned him a living for 33 years. Mark has many fans in the Napa Valley who are familiar with his non-commercial artwork through the exposure of dozens of exhibits and many years of participation in Napa Valley Open Studios. They treasure the wit and whimsy of the quirky imagination that manifests in his art.

It is noteworthy that along with his retirement from his commercial art career in 2016, he also ceased showing his work in Open Studios that year.

During the years since 2016, he has immersed himself creatively in building models from kits, focusing primarily on armored vehicles from World War I and World War II eras.

“I began building models as a kid, then did a bunch more when my two sons were kids, and now I’m reverting to being a kid again myself,” he said.

Nowadays, he orders kits from all over the world, and has built many dozens of models. Starting primarily with all sorts of tanks, he then began adding ships, submarines, blimps and airplanes. Concurrently, he typically studies and reads about the time periods of the military gear. He has also gleaned techniques from studying YouTube and trade publications specific to model building. His expertise has grown exponentially. He gets a kick out of bringing his own well-practiced artistic talents to the finishing and weathering of the models.

The preoccupation with kit-building has provided many hours of fun focus in his studio, and a welcome respite from stressful inundation of political issues plaguing the nation the last few years and medical issues during this period of COVID-19.

Also, during this period, Mark has returned to his drawing practice with renewed vigor and inspiration. He has found that sheltering in place at home has allowed him to focus relatively uninterrupted on his drawing.

“My biggest distractions are kit building, honey-do projects, walks with Elizabeth, and assisting with meal prep,” he said. “I don’t mind helping in the kitchen, because Elizabeth is a great cook, and I love to eat!”

Despite having 40 years’ experience in illustration, painting, and sculpture-making, Mark fundamentally considers himself a cartoonist. Roughly corresponding with the beginning of shelter in place here in Napa, he resurrected some earlier cartoon characters he calls Naugas, short for Naugahydes. These are anthropomorphised creatures with cow-like traits. In their current incarnation, they are aging and pondering what options await them in their “golden years.” In afterlife, will they become stylish jackets, luggage, upholstery?

Mark has completed at least a dozen Nauga-themed cartoons, including a series of seven billboards promoting mobility products by the Nauga Grazing Company for the Nauga population. While this subject matter does not directly tie in to COVID-19, he does concede it may be influenced by the arrival of his own 70th birthday in May.

In addition to the Nauga cartoons, Mark has created several cartoons related to COVID-19, one of which was featured in mid-April and another mid-May on the editorial pages of the Napa Valley Register.

Rosemarie Kempton checks in on Napa Valley artists during the COVID-19 pandemic.

Napa Valley Artists in Residence: A time to discover what you truly value

Artists in residence: Napa County artists are staying busy during the lockdown

While much of the world’s people are staying inside their homes to prevent the spread of the Covid-19 virus, Napa’s artists are quietly and passionately creating art.

Artists in Residence: What do artists do while quarantined? Create!

While much of the world is staying inside their homes to prevent the spread of the COVID-19 virus, Napa artists are quietly and passionately creating art.

Napa Valley artists Edmund Ian Grant, Kristi Rene,Zaza Fetterly and Emil Yanos weigh in on what they are working on, while they shelter at home.

While Napa Valley artists shelter at home, they're more creative than ever

What are Napa Valley artists doing during the shelter at home order?

A walk in the neighborhood during shelter at home.

Artist Mark Mattioli works on a cartoon at home.

Napa artist Mark Mattioli works on a ship model in his studio.