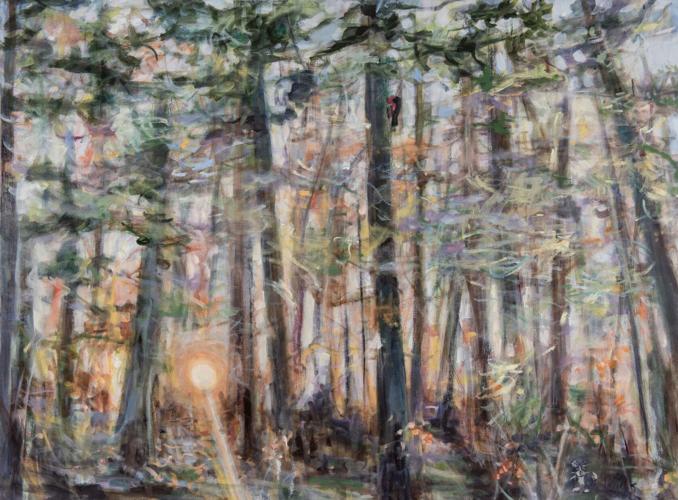 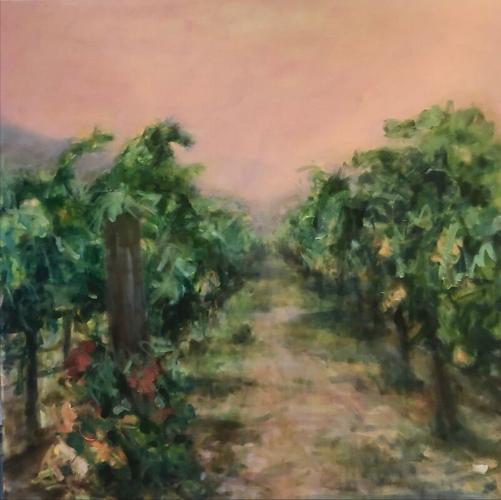 "From This Moment On, Painting as Response to Wildfire," is Napa Valley artist Nancy Willis' new show opening at Napa Valley College on Sept. 14.

Artist Nancy Willis opened a new show at Napa Valley College's Visual Arts Center on Sept. 14. "From This Moment On ...: Painting as Response to Wildfire" runs through Oct. 15.

Willis paints moments of everyday life from domestic and exterior scenes. Her own garden has been the backdrop of many eventful dinner parties, lit by candles and strings of lights hanging from the redwoods. Moments from these events became motifs and recurring themes in her paintings.

Willis’ connection to her surroundings became much more acute with the wildfires of 2020. She was evacuated three times that fall and during the 2020 Glass Fire lived in a Napa hotel for 30 days. Her front yard in Deer Park hosted fire engines and first responders working tirelessly to save the forested neighborhood, and her house was spared. Willis turned to painting with a sense of urgency, going back into some completed paintings and modifying them with the smoke and orange glow that she saw the night she left.

When she returned, she found the landscape that she shared with wildlife was charred and devoid of color and life. With support from Arts Council Napa Valley community fund grants, she began a series of paintings tracking the effects of the fire on the redwood grove and forest near her home. She also collected artifacts and detritus from the fires, hearing stories of loss from neighboring families. With some of the materials she created a sculptural chandelier as a symbol of hope, and installed it in Lyman Park in St. Helena for the one-year anniversary of the fire.

In July 2021, Willis was awarded and attended a painting residency in France that offered respite and relief. Paintings of the verdant green French landscape are included in the exhibition as a sign of recovery and hope. The two-year project follows the artist’s experience, seeing glimpses of animals returning, new growth bursting up at the base of the trees, and depictions of a large redwood that stood witness to fire.

“Throughout my years of art making, I have pulled motifs from my personal life or created projects out of empathy for others," Willis says. "Until now, I have never used my process so overtly to work through my own trauma and grief. It weighs with an enormous gravity. I am confronting the security of my own existence as well as the security of the landscape we all share.”

The exhibition is curated by Amanda Badgett, art history professor at NVC, who writes: “Through her paintings and prints, Nancy gives lie to the idea of a static landscape: a grove of redwoods, all blackened and spindly in one canvas, emerges in another bristling with new growth. In a valley whose economic well-being is inextricably tied to agriculture, looking at Nancy’s images reminds us of the fragility of landscape in the face of global warming and the now ever-present threat of fire.”

Nancy Willis has lived and worked in St. Helena/Deer Park since 1989 and holds and MFA from SFAI. She is a painter, printmaker, curator and teacher. Willis conceived of and curated two large exhibitions at the Napa Valley Museum: “Discrepancy/living in war and peace,” which honored the 10th anniversary of 9/11, and “NOURISH,” which explored the rituals around dining. Her ongoing project “Conflict Zone” examines how violence against women is used as a strategy of war. Until the COVID-19 pandemic she taught at the Culinary Institute of America, and currently continues to teach at NVC and Nimbus Arts.

Watch Now: Popular videos from the past week you may have missed

Watch as a massive sandstorm hit part of northwestern China, an amateur astronomer has captured video of a rare green and red aurora, and more popular videos from the past week you may have missed.

This type of aurora is so rare, it’s never been captured on film before.

More than 200 people took part in a techno music party in a bombed-out building in northern Ukraine on Sunday.

For a week, a young female walrus nicknamed Freya has enamored Norwegians by basking in the sun of the Oslo fjord, making a splash in the medi…

Historic Roman ship found during dive off coast of Italy

An Italian diver found a sunken shipwreck from 1500 years ago. Yair Ben-Dor has more.

Sharks in the Midwest? It’s happened before

Researchers say there have been at least two bull shark sightings in the Mississippi River since the 1930s.

These are the images from the aftermath of a destroyed hotel in Donetsk, where emergency workers pulled a man from the rubble of a hotel after…

Firefighters are still working to contain the biggest blaze to hit the US state of California so far this year. The so-called Oak Fire, which …

Rescued manatee flown from Texas to Florida on cargo plane

This large manatee is finally home after 7 months of rehabilitation and a thousand mile flight. Yair Ben-Dor with more.

A motorcyclist stranded on a bridge was almost swept away by intense flood waters before being rescued by police in Telangana, India, July 26.

Open Studios concludes this weekend in Napa Valley, and so does Napa Valley Museum's hit show "Dangerous Games." Coming up is a new writers' salon at the Jessel Gallery, along with a new meeting place for Napa Valley Photographers.

Studio 42: Art tucked away in an enchanted Napa Valley garden

Studio 42 is new to Open Studios Napa Valley this year. With 200 pieces of art displayed throughout five outdoor garden rooms, it offers visitors a treasure hunt of discovery.

REVIEW: Lucky Penny's 'Vanya and Sonia and Masha and Spike' spins Chekhov into comedy in Napa

Chekhovian characters are given a blender-like and often hilarious spin in Lucky Penny Productions' latest production, which opened in Napa last week.

An invitation to local artists from di Rosa, the upcoming book sale at the Napa library, and the latest in films from the International Showcase at Jarvis Conservatory.

Meet Vanya and Sonia and Masha and Spike

"From This Moment On, Painting as Response to Wildfire," is Napa Valley artist Nancy Willis' new show opening at Napa Valley College on Sept. 14.