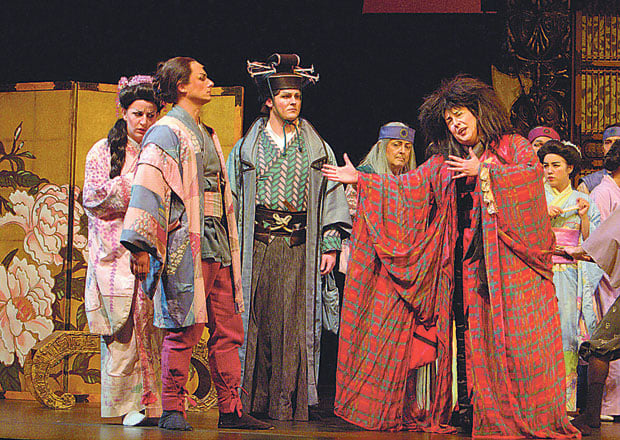 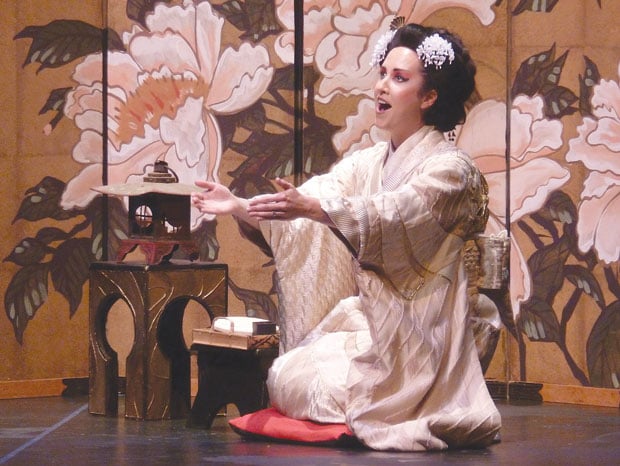 Yum Yum (Moira McManus) is in love with Nanki-Poo, a prince in disguise. Joanne Kay photo 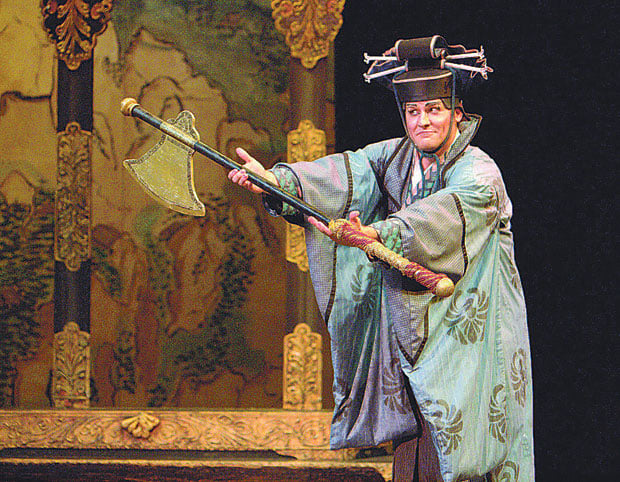 Pish-Tush is a key character in “The Mikado,” which opens at the Napa Valley Opera House on Saturday. Lucas Buxman photo

Lamplighters Theater will be in Napa this weekend for two performances of “The Mikado,” the opening production of its 60th season.

Lamplighters, whose mission is to “share our enthusiasm for the works of Gilbert and Sullivan,” will also present “Princess Ida” and “The Sorcerer” in the 2012-13 season. They’ll perform “The Mikado” on Saturday at 8 p.m. and Sunday at 2 p.m. at the Napa Valley Opera House.

The perennially popular “Mikado” is set in the mythical town of Titipu Japan where the emperor — the Mikado — has declared flirting to be a capital offense. Written as a satire of Victorian British society, “The Mikado” features such memorable characters as Nanki-Poo, Pish-Tush, Yum-Yum, Peep-Bo , Pitti-Sing, Ko-Ko the lord high executioner, and Lord High Everything Else Pooh-Bah. As with many Gilbert and Sullivan creations, the creators chose to set their action in an exotic locale so that they could more easily satirize British politics and politicians.

“The Mikado” opens with the arrival in Titipu of Nanki-Poo, the son of the Mikado traveling in disguise to avoid the amorous advances of an elderly lady of his father’s court. Nanki-Poo has fallen in love with the beautiful Yum-Yum, fiancée to Titipu’s Lord High Executioner Ko-Ko. Formerly a tailor, Ko-Ko received this promotion after being condemned to death for flirting. The Titipu authorities concluded he could “not cut off another’s head until he cut his own off” and so they could thwart the Mikdo’s decree.

When, however, the Mikado declares that if Titipu does not carry out an execution, he will reduce its status to a village, Pooh-Bah and Pish-Tush point to Ko-Ko as the obvious choice for a sacrifice. The executioner objects on the grounds that it would be difficult and dangerous to execute himself; and also it would be suicide, another capital offense. Naki-Poo offers to take Ko-Ko’s place on the condition that he first be allowed to marry Yum-Yum, and chaos and comical mayhem ensue in classic Gilbert and Sullivan style with impromptu marriages, forged death certificates and the revelation of a prince in disguise.

“The Mikado,” the ninth of Gilbert and Sullivan’s 14 operatic collaborations, opened on March 14, 1885, in London, where it ran at the Savoy Theatre for 672 performances. It has continued in its popularity both as a professional and amateur production.

Lucky Penny Community Arts Center shines the spotlight on one of America’s most beloved humorists in nine performances of “Erma Bombeck: At Wit’s End,” running Oct. 15 to 31.

Napa Valley College (NVC) Performing Arts will present a season of five in-person performances this fall including productions of “All Together Now,” “A Charlie Brown Christmas” and “Elf Jr.,” as well as college choral and jazz ensemble concerts.

Theater in Napa Valley: A murder mystery at Vintage and an Upstage festival of local playwrights

The World of William T. Wiley: A look inside “Fort Phooey"

The artist William T. Wiley, who lived and worked in the Bay Area for 60 years, died in April of 2020. To commemorate his life, the di Rosa Ce…

Art in the Library: Art in the wild: John Comisky's nature photography is highlighted at the Napa library

You can see John Comisky's work during October at the Napa Main Library.

Yum Yum (Moira McManus) is in love with Nanki-Poo, a prince in disguise. Joanne Kay photo

Pish-Tush is a key character in “The Mikado,” which opens at the Napa Valley Opera House on Saturday. Lucas Buxman photo