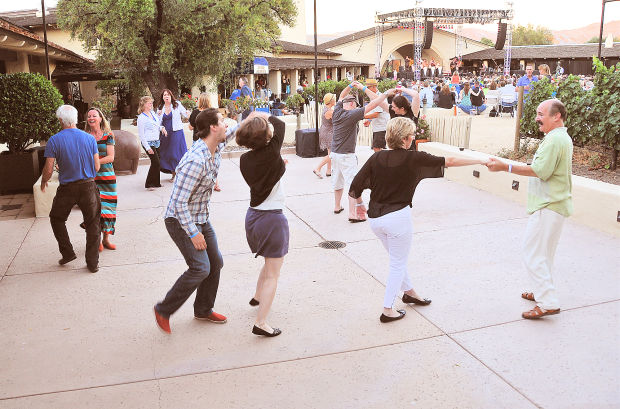 Anticipating that Saturday night's crowd would include a number of swing dancers, the folks in charge of the Robert Mondavi Summer Music Festival set up a dance floor adjacent to the winery lawn just for the occasion. 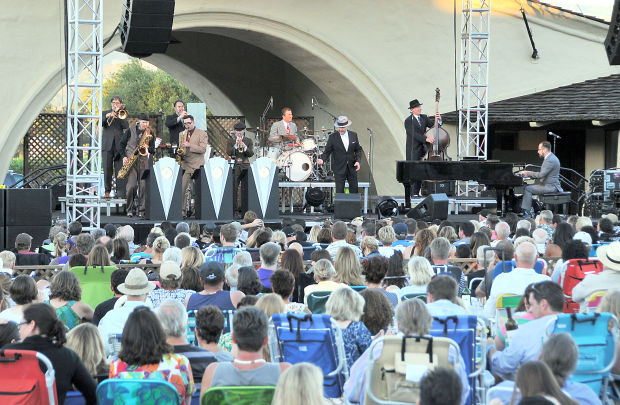 Celebrating 21 years of music-making, the nine-member swing band is as busy today — performing and recording — as it was when it first stepped onto Southern California stages. Not all that long ago, the group performed at Mondavi, that time around with the Napa Valley Symphony Orchestra. Big Bad Voodoo Daddy has been a star attraction at the Napa Town & Country Fair and was the opening band for the revival of Napa’s Uptown Theatre. Its members know Napa Valley fairly well.

For their return last weekend, Big Bad Voodoo Daddy offered a 90-minute performance that featured past and present hits along with period classics associated with the great Cab Calloway. Bandleader Scotty Morris enjoys writing songs in a vintage style as much as his musical cohorts like playing it.

Morris played punk and alternative rock before settling on the vintage jive sound. He and drummer Kurt Sodergren founded the band, recruiting some excellent young musicians who’ve remained in the group since the formative years.

He came up with the name after attending a concert by blues guitar legend Albert Collins. “He signed my poster, ‘To Scotty, the big bad voodoo daddy,’” Morris points out. “I thought it was the coolest name I ever heard on one of the coolest musical nights I ever had. So when it came time to name this band, I didn’t really have a choice. I felt like it was handed down to me.”

Big Bad Voodoo Daddy celebrates the big band era of pre- and post-World War II as well as the early days of rock ‘n’ roll. You can hear it all in the group’s hits, like “Mr. Pinstripe Suit” and “You and Me and the Bottle Makes Three (Baby).” It resonates as well in the tracks of the latest CD, “Rattle Them Bones,” such as a musical romp through the speakeasies of Prohibition America called “Diga Diga Do.”

Morris told the 1,100 souls on the winery lawn the other evening that when he learned there was a Randy Newman song written for Frank Sinatra that Ol’ Blues Eyes rejected, he was eager to record it. Focusing on the fact that success can be a double-edged sword, “It’s Lonely at the Top” seems a perfect fit in BBVD’s hands. Morris said Ol’ Blues Eyes rejected the mournful ballad as he felt it made him seem “too egotistical. I love Randy Newman’s directness — and the irony of the song felt like a perfect match for us. His take is more angry than ours — ours is a little more woe is me.”

At one point or another Saturday night, all nine members of the group had an opportunity — or two — to solo. We really liked the efforts of saxman Karl Hunter and trumpeter Glen “The Kid” Marhevka on the new CD’s “Diga Diga Do” and “The Devil’s Dance,” a New Orleans swinger with oodles of lively brass (including trombonist Alex Henderson, trumpeter Tony Bonsera and baritone saxophonist Andy Rowley) and the stride piano of outstanding keyboardist Joshua Levy.

It’s Levy’s arrangements that bring it all together. And let’s not forget the guitar and vocals of founder Morris, and the solid rhythm section — Dirk Shumaker on standup bass and co-founder Sodergren on drums and percussion.

Attired in fedoras and period suits, the band cut a dashing figure while serving up a polished, stylized sound.

Anticipating there’d be a good number in the crowd eager to shuck and jive, the folks at Mondavi set up a dance floor just off the lawn, strung with lights that also struck a throwback to earlier times. Even though a lot of the music was new, Saturday night at Mondavi teemed with nostalgia.

Opening the show were two members of a breakout Reno-based quartet, the Novelists. Guitarist Joel Ackerson and pianist Eric H. Andersen are, as the group’s name implies, a couple of storytellers who turn their own life experiences into song lyrics.

For example, Ackerson chronicled two dates — two teens just happen to choose a murder scene for their initial parking date, “No One Watching Us”; another a cautionary tale, “Take It Slow,” that happily turned into a marriage now in its eighth year.

Pianoman Andersen rocks out on his live-and-let-live anthem, “Above the Hiding,” from the young band’s second CD. In another, the young men throw off the mantle of their parents’ generation, in the aptly titled “I Don’t Want to Be Like You.”

The Novelists played Live in the Vineyard here last spring and with their Mondavi appearance convinced us they’ll be entertaining more than residents of the Silver State before long.

Chiara Ferragni to star in a new reality show

Phil Collins confirms next Genesis tour will be his last

Phil Collins confirms next Genesis tour will be his last

Review: Calshakes' makes a glorious return with "The Winter's Tale"

California Shakespeare Theater (Calshakes) has returned to the stage with "The Winter's Tale."

Anticipating that Saturday night's crowd would include a number of swing dancers, the folks in charge of the Robert Mondavi Summer Music Festival set up a dance floor adjacent to the winery lawn just for the occasion.