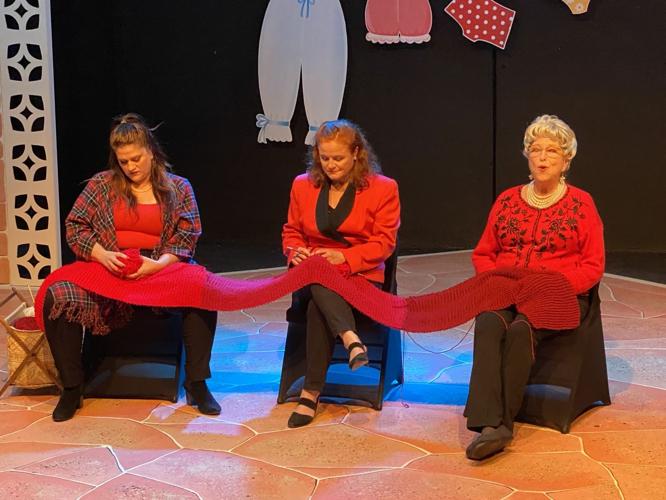 Paige Whitney-White, June Alane Reif and Randi Storm in "Meat Like Me," from "Ladies' Briefs" at the Lucky Penny Community Arts Center in Napa. 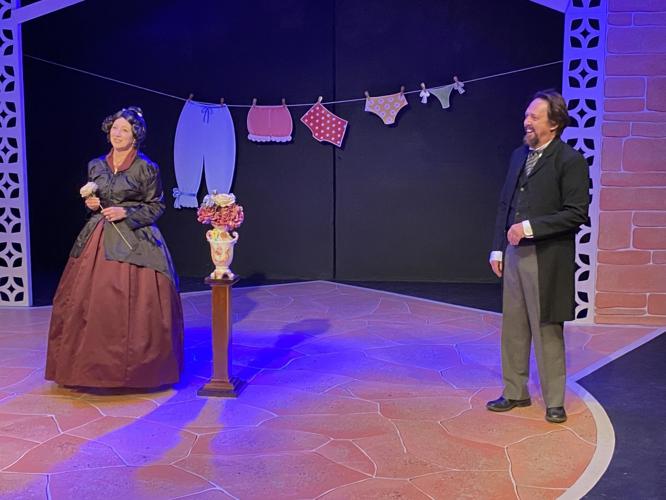 In  “Expectations” by Jennifer O’Grady, Charles Dickens (Richard Pallaziol) and his wife, Kate, (Lauren Haugan) address the audience to explain the circumstances of their divorce — or his abandonment of her for a younger woman after she gave him many children.

Of all the pandemic casualties, I’m encouraged by the fact that Valley Players has survived. They have emerged with a powerful new show of 10 one-act plays that plumb the depths of the feminine experience, titled "Ladies' Briefs."

"Briefs" because of the brevity of the plays, but also because the show puts forth the unseen aspects of being a modern woman.

Valley Players’ mission is to find and produce plays that feature women over 40. It’s a refreshing premise that provides a means of expression to a demographic historically silenced. And, given how underrepresented these stories are, such a premise produces some very moving theater.

The plays were chosen from those that came in from a national call for submission. None of them have been performed before.

The artistic directors at this theater company do not shy away from hard-hitting drama, and this show is no exception. There is a balance though: there are five comedies and five dramas, which alternate, beginning with something serious, and ending on a happy note.

One of the more hilarious offerings is “The Matter with Family” by Amy Tofte. The premise is that a woman is concerned about her sister’s having an affair with a married man, so she hires an “extraction” service to pull her out of bed, literally, it seems, in flagrante delicto.

In the getaway car, the merits of an affair are debated. On one side is finally having an ecstatic sex life, and on the other, the inevitable truth is that that man will never leave his wife.

Another pleasure is “Growing Old withOUT Grace,” written by Napa Valley playwright Christina Julian. It is about three ladies getting together for lunch at a restaurant on one of their 50th birthdays. June Alane Reif plays a newly half-century-old, pandemic scarred and sanitation-obsessed woman convinced that that 50 is the end of her life. She wears rubber gloves and wipes everything on the table down with alcohol. She has trouble ordering and the millennial waitress is too preoccupied with her phone to notice they are ready to order. A situation pointed out by the ladies with, satisfyingly, very little nuance.

One of the most innovative plays is “Expectations” by Jennifer O’Grady. In it, Charles Dickens and his wife, Kate Dickens, address the audience to explain the circumstances of their divorce — or his abandonment of her for a younger woman after she gave him many children.

The play is brilliant because neither character addresses the other. They both only talk to the audience. They each tell their own side of the story of their break-up. What Dickens says about their split is rife with the misogyny and male superiority one would expect from a man who epitomizes a society that views women as the chattel of their husband. Mrs. Dickens is helpless and mystified that men could be so clueless.

My favorite play, "Meat Like Me" by Yael Haskal, was perhaps the most avant-garde. It was composed of three women sitting side by side, with a huge knitted scarf spread over their laps.

Stage right was a young woman, with a ball of yarn and knitting needles in her lap, who seemed to be from a lower economic status; in the middle was a middle-aged career woman, who has the scarf draped over her legs, and stage left was a woman whose first romance was in the 1950s, and she holds the end of the scarf. The scarf is the arc of their lives.

Each character had a monologue where she detailed interaction with a man. The oldest concerned the embarrassment around a missed kiss in a movie theater. The middle woman related an ideological battle over the relevance of a coffee maker, and the youngest described a sexual encounter that, unsurprisingly, left her feeling cold and used.

I won’t give away anything more, except to say that even in the dress rehearsal, there was transfixing magic in the theater. These stories were real, authentic, believable, touching, and worthy of much more than 10 minutes in a variety show.

I have long bemoaned the small audiences at Valley Players’ shows. The experience deserves more recognition. And, it’s amazing that entertainment so sophisticated is not only shown in the Napa Valley but also produced by the people in the Napa Valley.

Every woman, young or old, should see this show. They would have their own experience validated. And, any man would do well to see this show, because understanding its insights will make him more compassionate and understanding.

A variety of songs from musicals well known, and obscure.

Trying out Terraball: Napa artist creates a new game played on a work of art

Artist Vincent Thomas Connors has created Terraball, an original, billiard-like game played on a customizable table. You can see it in action …

Jessica Simpson was pursued by 'massive movie star' in mid-2000s

Jessica Simpson was pursued by 'massive movie star' in mid-2000s

Paige Whitney-White, June Alane Reif and Randi Storm in "Meat Like Me," from "Ladies' Briefs" at the Lucky Penny Community Arts Center in Napa.

In  “Expectations” by Jennifer O’Grady, Charles Dickens (Richard Pallaziol) and his wife, Kate, (Lauren Haugan) address the audience to explain the circumstances of their divorce — or his abandonment of her for a younger woman after she gave him many children.