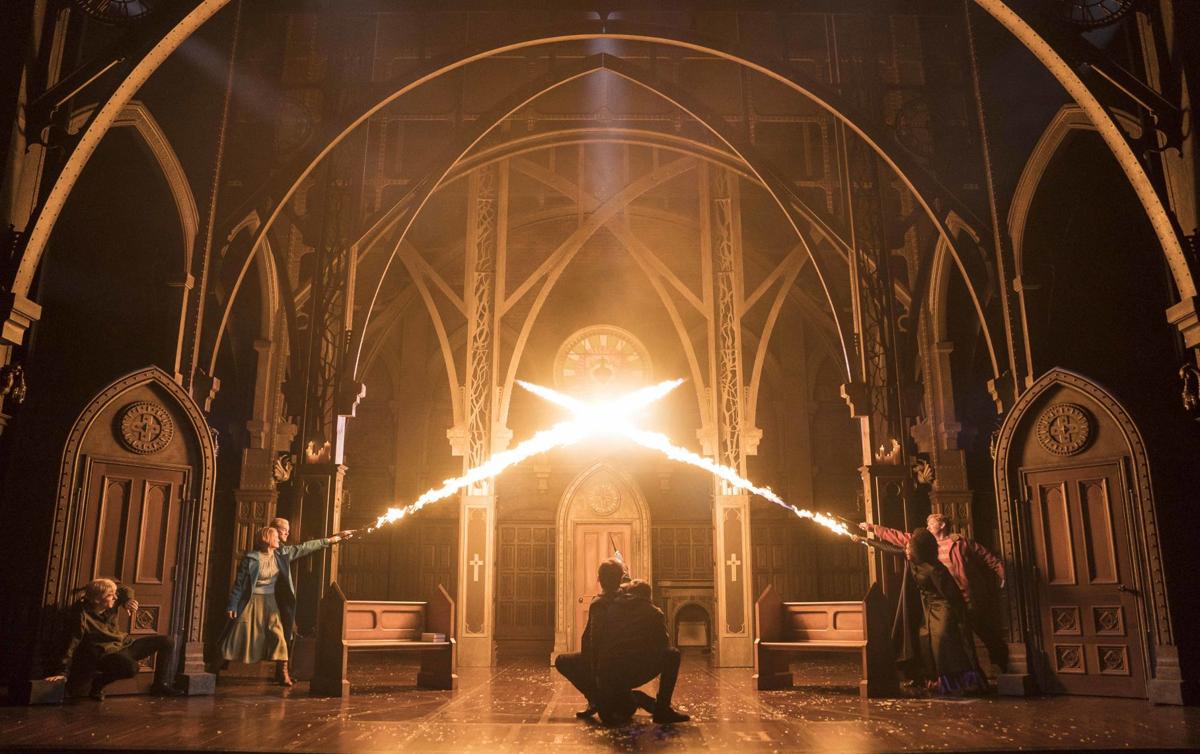 Good and evil duel, once again, in "Harry Potter and the Cursed Child" onstage at the Curran Theater in San Francisco. 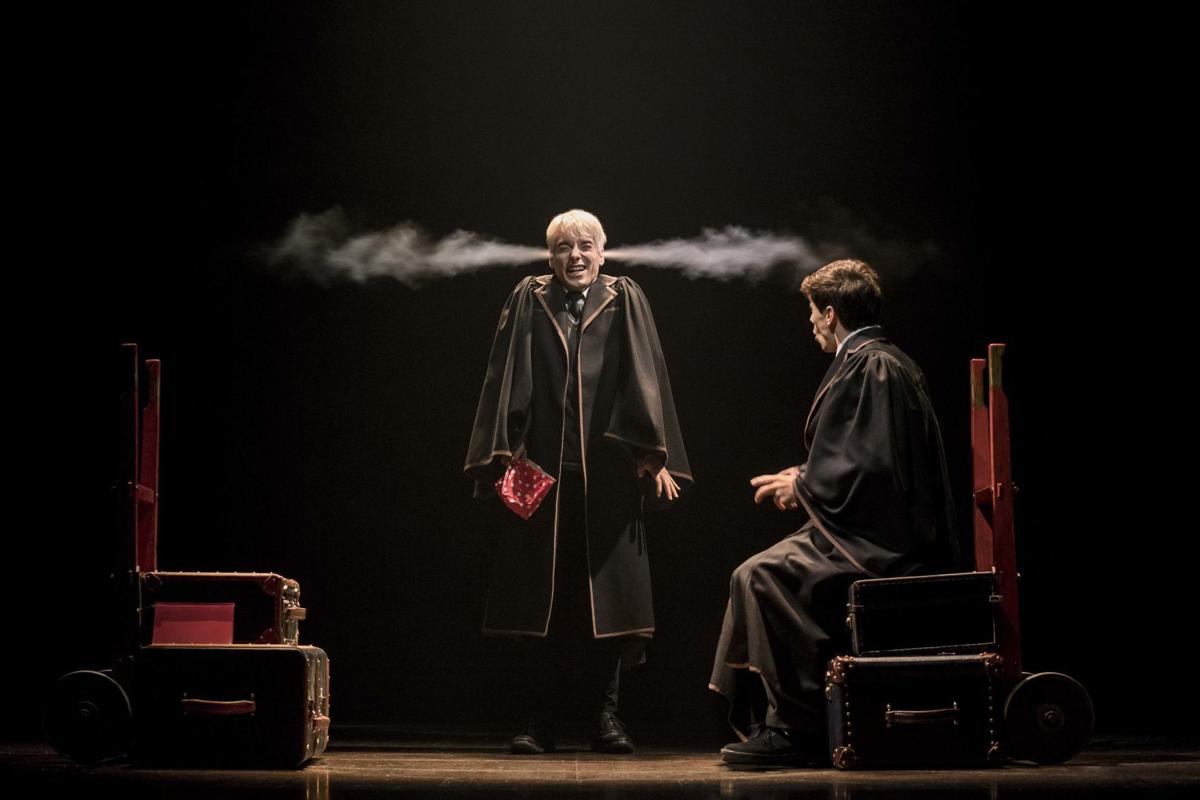 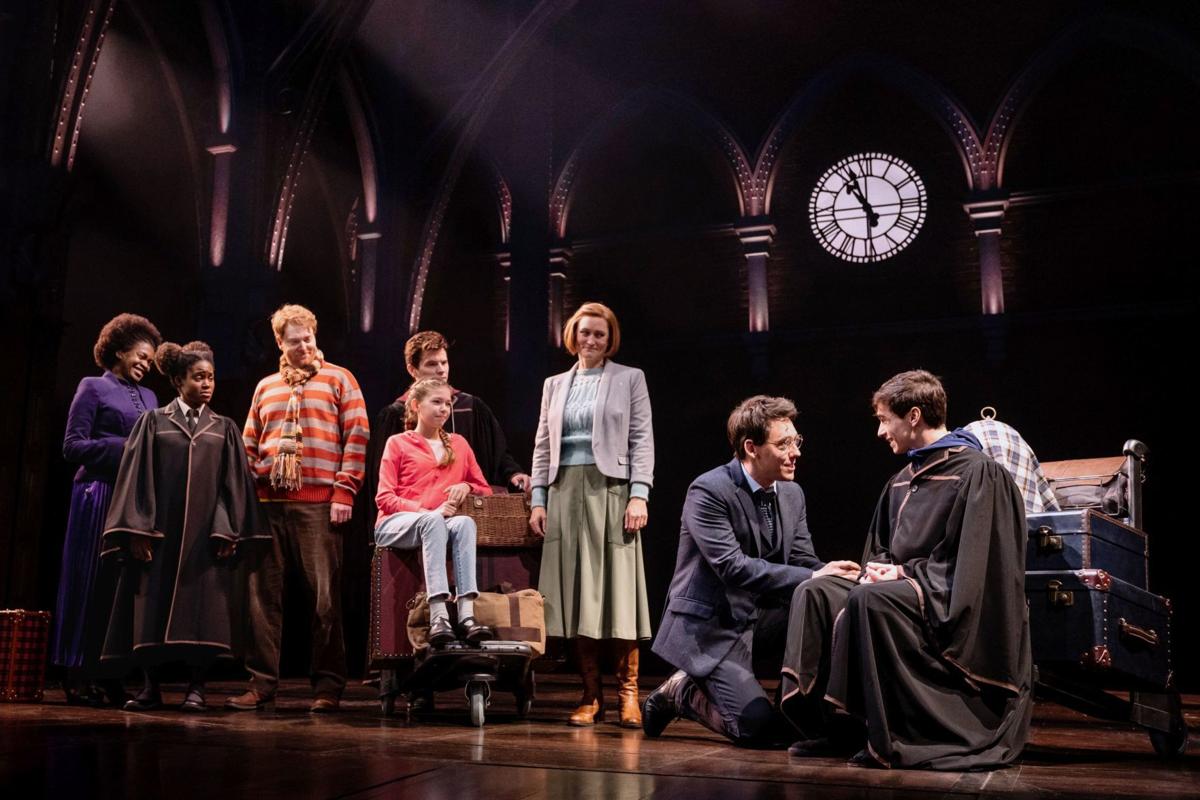 Taking place 17 years after the last novel in the series ended, "Harry Potter and the Cursed Child" features aging versions of the popular characters, including Hermione, Ron, Ginny and Harry, along with their children. 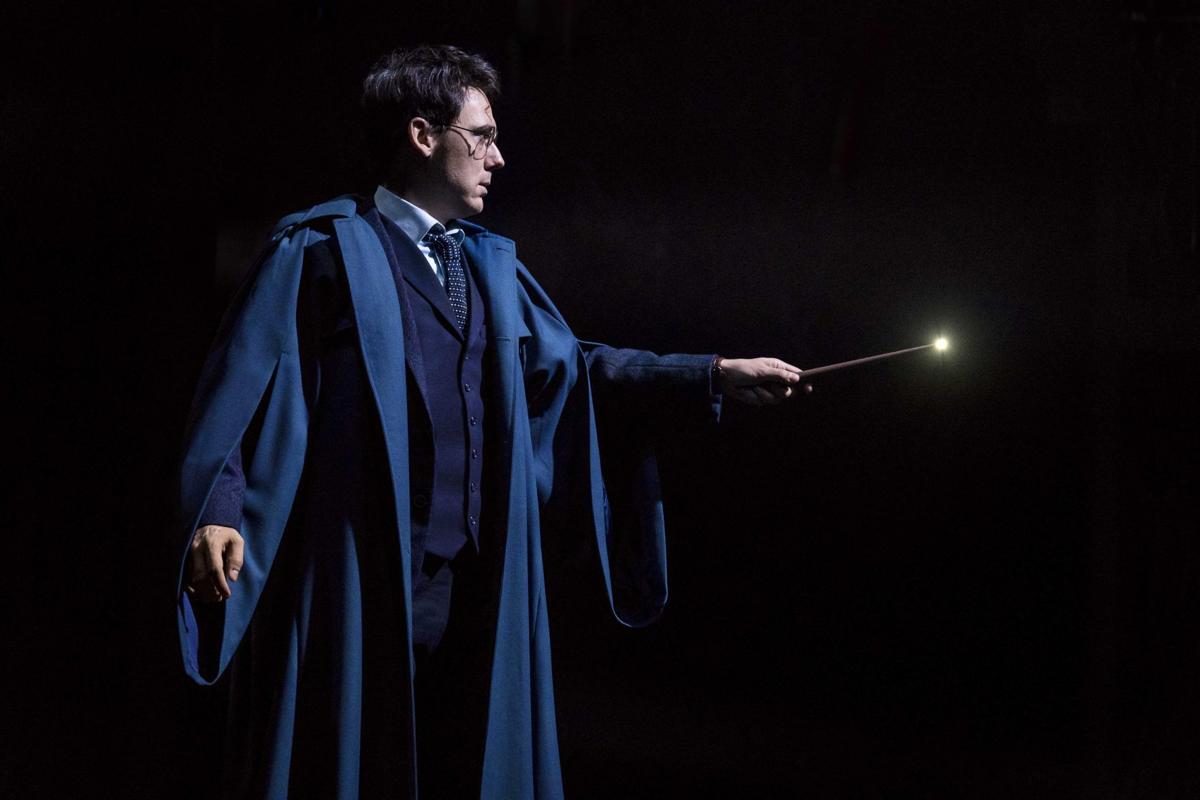 Harry Potter (John Skelley)  may be able to navigate worlds of magic, but he's having trouble as the parent of a teen-ager. 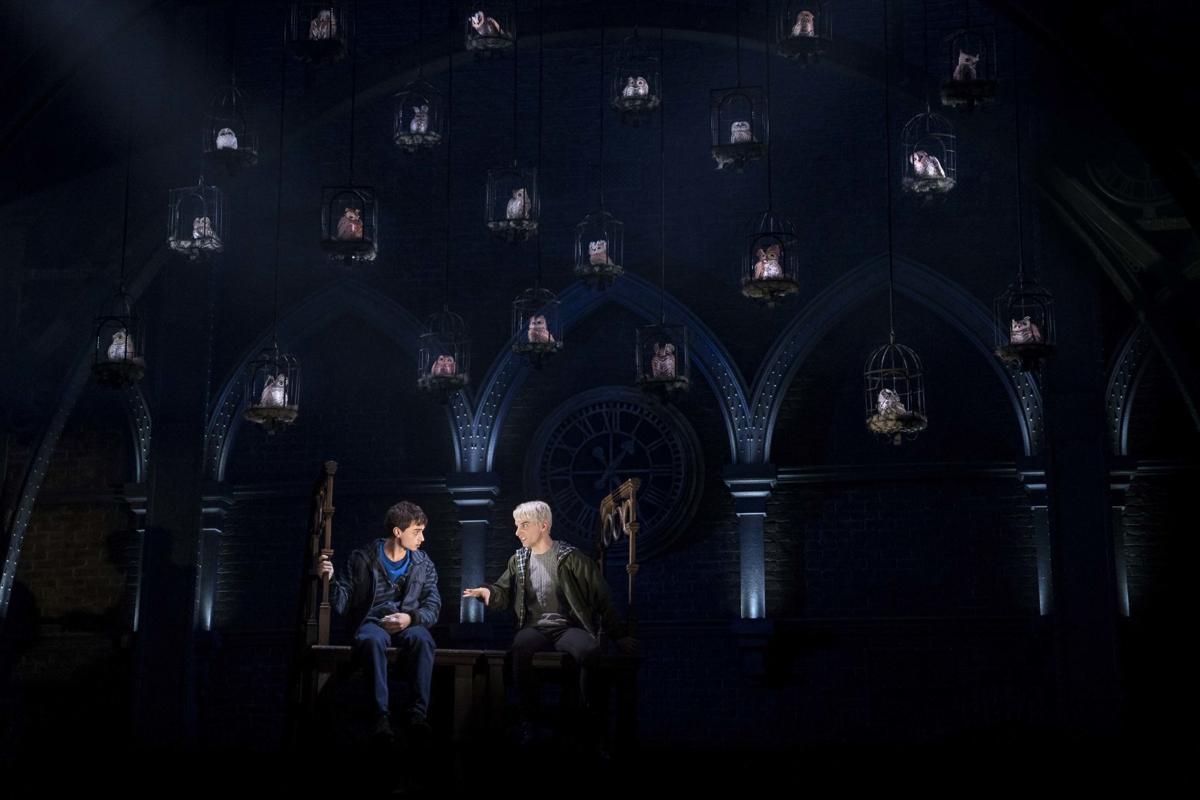 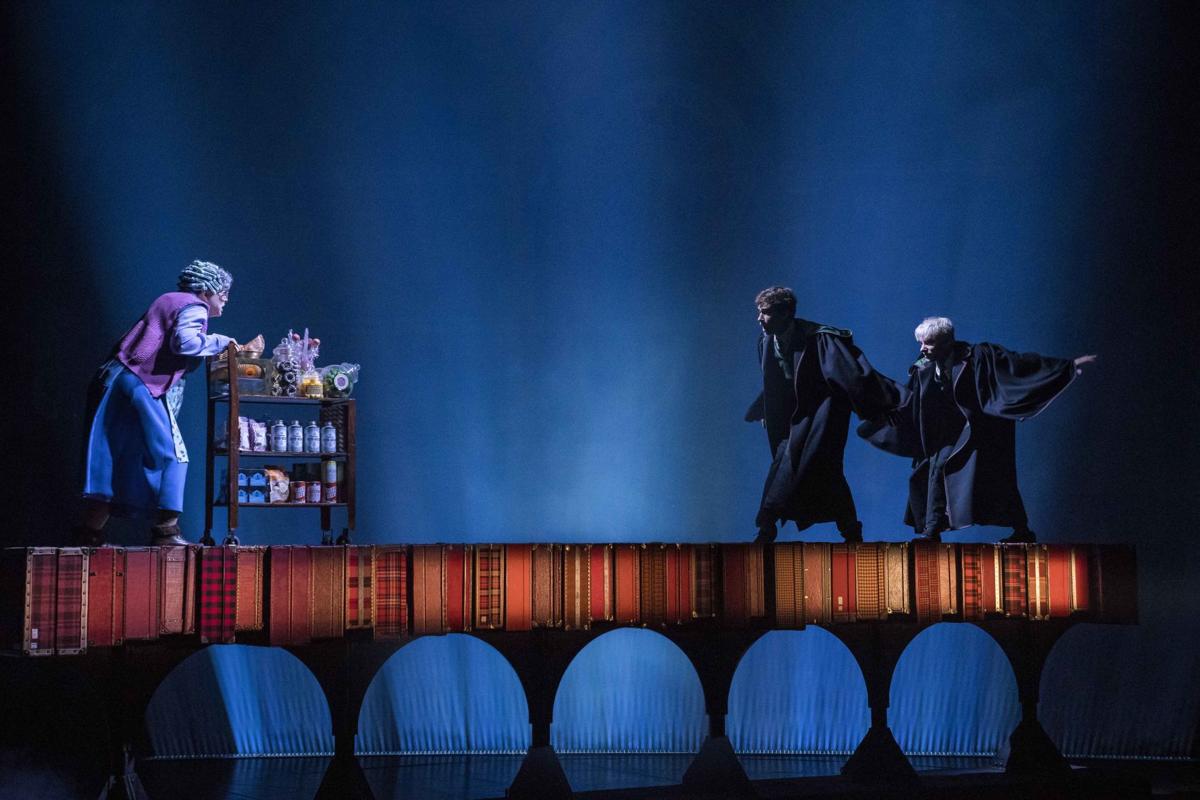 Albus and Scorpius encounter the sweet-seller on a particularly harrowing train ride to Hogwarts.

Good and evil duel, once again, in "Harry Potter and the Cursed Child" onstage at the Curran Theater in San Francisco.

Taking place 17 years after the last novel in the series ended, "Harry Potter and the Cursed Child" features aging versions of the popular characters, including Hermione, Ron, Ginny and Harry, along with their children.

Harry Potter (John Skelley)  may be able to navigate worlds of magic, but he's having trouble as the parent of a teen-ager.

Albus and Scorpius encounter the sweet-seller on a particularly harrowing train ride to Hogwarts.

The crush was oblivious to the chilled December rain. The sidewalk was jammed with people, small ones with large framed glasses, 20-somethings in black robes, and house scarves; lots of glitter everywhere, mingled with uniforms from a legion of security guards. Thank goodness members of the media got to skirt the crowds and slip in through the red carpet entrance.

It was the official opening day for “Harry Potter and the Cursed Child” in San Francisco.

San Francisco and New York are the only two cities in the United States where fans can see this, the eighth story in the Harry Potter series, a marathon, six-hour production, presented in two parts, with a dinner break in between.

San Francisco’s Curran Theater has gotten a makeover for the production. New carpeting is blood-colored and emblazoned with elaborate curly H’s everywhere. New wallpaper, too, is covered with H’s. Nothing is too good for “the boy who didn’t die” but instead sparked an global passion for wizards. In books.

I had not read past book 3 of the seven-part series. Book 1, “Harry Potter and the Sorcerer’s Stone,” my kids and I read together, one chapter a night. By book 2, they were too impatient for this plodding method. They absconded with each new book and read it in a day or two. My theory was that anything that could get kids this excited about books was a good thing.

Also a good thing was that these many years later, my daughter, who had read all the books, agreed to go with me to this opening, my guide as it were to the world of Hogwarts School for Witches and Wizards, and the dauntless trio, Harry, Hermione and Ron, who saved the world for wizards and muggles.

But here is the question: when, as a teen-ager, you have confronted evil and vanquished it, what do you do for a second act?

“Harry Potter and the Cursed Child” opens 19 nears after the last book finally triumphs over Voldemort, the relentless the threat to the world, and especially to Harry Potter.

Harry has become a mundane bureaucrat in the Ministry of Magic, the head of which is the bold and brainy Hermione. She is married to Ron who runs a joke shop and raises the kids. Harry is married to Ginny from book 2 and they have three children.

Harry, able face down evil and win, is having a rough time of it as the father of a teen-aged son, Albus Severus Potter, named for two of Harry’s late mentors at Hogwarts, is experiencing an equally tough time being the son of the famous Harry. Sent off to follow in Harry and Ginny’s footsteps as wizard-in-training at Hogwarts, Albus is sent by the Sorting Hat, not to the house of Gryffindor, Harry’s old haunt, but to the creepy Slytherin, once the house of Harry’s arch-enemy, the nasty Draco Malfoy.

Furthermore, Albus finds a friend at Hogwarts in none other than Draco’s son, Scorpius. And if you think it’s hard to be Harry Potter’s son, you should consider the challenge for a kid to inherit the mantel of Draco, who very nearly became a Death-Eater; that is, a follower of Voldemort.

What can this pair do but defy their parents’ edict that they shall not be friends, become best friends and set out to accomplish something on their own? Except, as Albus dolefully points out later, they almost destroy the world.

Who is the cursed child? Is it Albus, weighed down by Dad’s legacy? Or is it Scorpius, self-deprecating, funny, and devoted to his friend, who is suspected of being not Malfoy’s but Voldemort’s son? (And how did either one father the most appealing character in the play?) Or is it someone else, a distinctly appealing (in the eyes of Albus) and disturbingly magical girl?

In the true J.K. Rowling fashion, the plot of the “Cursed Child” is a rollicking train ride of ups and down through a landscape filled with well, all kinds of things — chatty books, talking portraits, ghosts in the bathroom, owls, sweets, and, of course, an abundance of magic wands.

It may not be the most original plot, and much of the dialog has a distinct limp, but these are minor points in a production that revels in magic. The staging is spell-binding, and the never-ending tricks rivet the imagination. Those who are not so fortunate as to have a companion to explain, for example, that, no, those giant, flying, ghostly things are not ghosts but dementors who feed on happy human emotions, can still marvel at them as they swoop and soar and suck up human souls.

You may not remember exactly who Cedric is (“Mom, he was killed in a Triwizard Tournament”), but when Albus and Scorpius steal a time turner to go back in history to make him undead, the entire giant set wobbles in a way that could almost make you believe you are going along for the ride. Wands flash and pumpkins dance in the dark. People are transformed before your eyes; they slide out of fireplaces and vanish into phone booths. Even set changes are a marvel, cloaked as they are in sweeps of wizardy capes.

“Harry Potter and the Cursed Child” is fun. It’s long but you can have dinner between the onslaught of spectacular catastrophes. And there is a Starbucks across the street, although you are not supposed to bring the coffee into the theater. (I think this is my only real complaint about the show. I am sure the Curran could pay for all the Harry Potter carpeting by selling coffee in the lobby in addition to cocktails, wine and Harry T-shirts.)

While I suspect the chief allure of the show is that it allows those who grew up with them to revisit beloved characters — there was applause when Prof. Snape, once dead, turns up writing on a chalkboard — and to relive the thrilling events of the books, many of which are reprised in flashbacks. They are all there, even the nasty relatives who once made young Harry sleep under the staircase.

Anything that gets young people excited about going to a play (or in this case, two) is a good thing.

Tickets are on sale through June 20, 2020, at HarryPotterOnStage.com and in person at the Curran Theater box office. Additional tickets will be released on Friday, Dec. 6 at 11 a.m. for performances through July 12, 2020. The box office hours are Tuesday through Saturday noon to 8 p.m. and Sunday 11 a.m. to 7 p.m. (closed Monday).

In addition to the U.S. West Coast production in San Francisco, “Harry Potter and the Cursed Child” is now playing at the Palace Theatre in London, at the Lyric Theatre in New York, where it opened on Broadway in April 2018; and at the Princess Theatre in Melbourne, where it opened in February 2019. Upcoming productions also include the German premiere, the first non-English language production, at the Mehr! Theater am Großmarkt in Hamburg in spring of 2020, and the sixth production will open at the Ed Mirvish Theatre in Toronto later that year.