Review: Shakespeare pops up all over di Rosa
Share this
{{featured_button_text}}
1 of 2 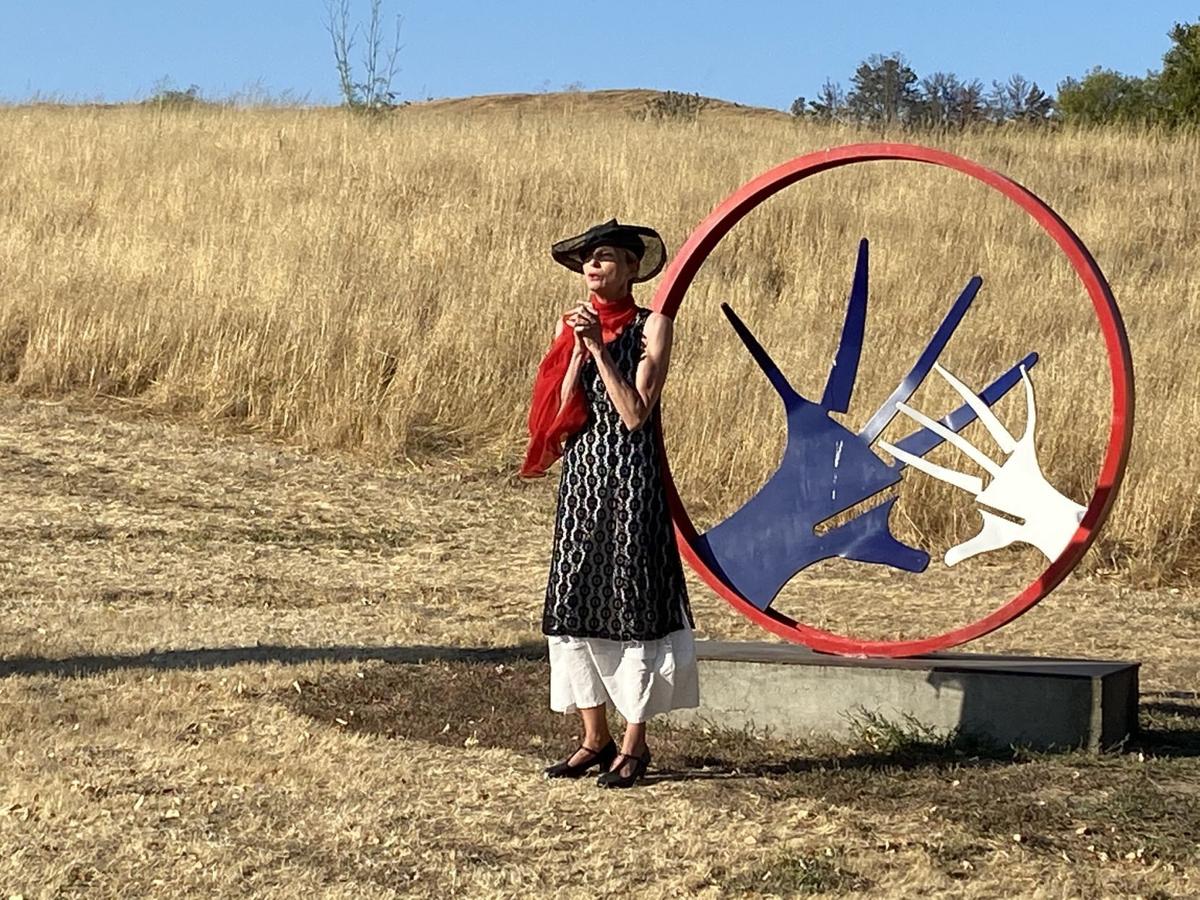 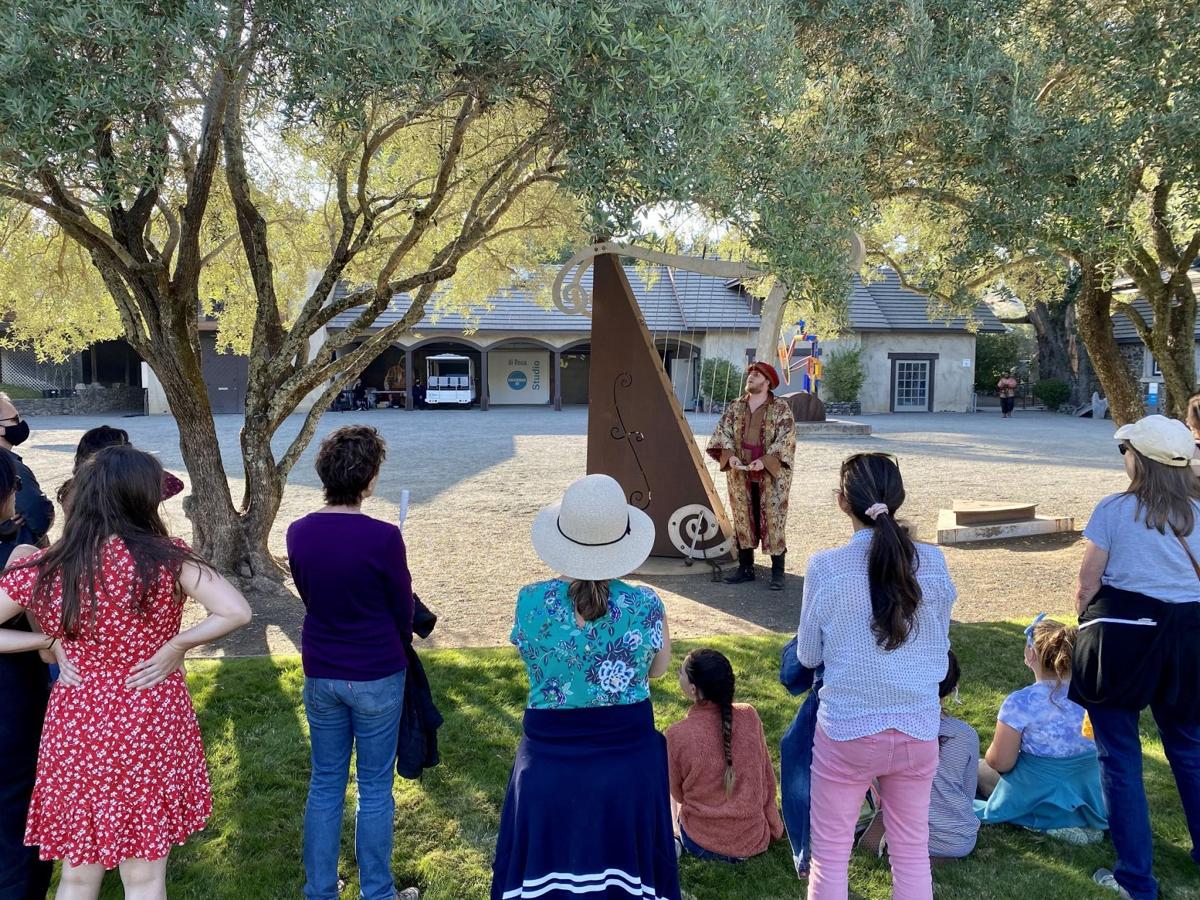 Guests watch a scene from "Romeo and Juliet" at di Rosa.

When Jennifer King of Napa Valley College suggested to Olivia Cowell of Cafeteria Kids Theater that they come out of pandemic hiding and produce live theater again, she wasn’t sure what kind of constraints the post-pandemic world would require.

So, rather than start with an indoor production, she chose to partner with the di Rosa Center for Contemporary Art and stage a “Summer Shakespeare Stroll” where the audience would be led through the contemporary art museum’s sculpture gardens and be entertained by a cadre of actors doing Shakespeare’s greatest hits, or, what Olivia Cowell told me was, all of her favorites.

The event sold out in four days.

It all started with a reception on Gallery 1’s beautiful terrace overlooking the lake, with little cups of Redmon Carneros Chardonnay. Then we sauntered down the catwalk where Jarrett Galante as Prospero from “The Tempest” surveyed the great lake with Pilar Gonzales as Miranda by his side. The backdrop was “Djinn” a blackened, charred, almost coral-like, slab of redwood that was suitably surreal for Shakespeare’s magical island.

That was one of the many interesting things about the show. Rather than design sets around the actors, Cowell started with the art as a natural stage.

Prospero and Miranda began to walk down the long drive along the lake toward Gallery 2. Because of the direct proximity to water, we actually felt like we were on the magical island where “The Tempest” takes place. Ariel appeared -- Phil Ferrero decked out in a shimmering sea-green gauze, and we followed him as he twirled and twinkled down the road.

Then we came across Matt Cowell as Stephano on a stretch of beach. He was dressed like a pirate with an eyepatch, and drunker than a skunk, and his performance underscored the fact that there are no more articulate and clever drunks than Shakespeare’s.

Gina Bcherry then performed a somber Sonnet 55, in flapper garb with a large round hat before an unnamed and unmarked sculpture of a red and blue circular starburst.

The 1920s continued once we got to the residence courtyard at the top of the hill, an apt time period for one of the most caustic scenes from “Much Ado About Nothing.”

Beatrice, played by Aimèe Guillot, nonchalantly cold, refuses to give in to Benedick’s overtures, choosing rather to insult him with a scalding, acerbic wit. Benedick, played by Luke Myers, returned the favor, but seemed to be no match for Beatrice’s wicked tongue. Enter Sophie Heflebower as Hero (in more ways than one), with a letter that reveals everyone’s true affections. All sarcasm dissolves and they live happily ever after.

I looked across the courtyard and noticed a balcony in the far corner shaded by a huge oak tree. As I suspected, Carter Sherwood stoutly read the prologue to “Romeo and Juliet.” Then came Jonathen Blue as Mercurio and Tybalt played by Phil Ferrero, who performed the fatal swordfight while Sylvia Vargas’ Romeo looked on in terror.

Tessa Mello beckoned us to her balcony and began one of the most famous scenes in all of Shakespeare’s plays. Vargas stood in the shade of the oak, outside of Juliet’s sightline. Romeo revealed herself (what is more forbidden than love between women?) and that is the last time either of those two are happy.

On our way to an ancient olive grove we met a perfectly insane Ophelia from “Hamlet” played by Emma Sutherland, clearly disturbed by her father’s murder and mother’s marriage to his killer. She passed out sticks to the audience calling them rosemary and mustard, in a desperate attempt to make an ugly situation beautiful.

We passed through a great arch and found on picnic tables with plates of canapes: Parmesan crisps with roast beef and horseradish, caprese skewers of mozzarella, tomato and basil and others. An attendant was gingerly pouring Cuvaison Carneros Pinot Noir. Silent, as if under some spell, we all wondered how we were so lucky to not only see this brilliant production, but also enjoy a wine tasting. We sat down.

Enter the Hamlets, played by Katie Linza and Luke Myers and Laertes played by Pilar Gonzales. We witnessed another sword fight where Laertes perishes and the Hamlets, in fits of mania, seem unconcerned with the death of their friend.

Then came, for me, the biggest discovery of the night. Phil Ferrero, Josephine Goldfarb and Sophie Heflebower, dressed in purple hooded floor-length tunics, seemed to coalesce in front of a huge arched steel gateway and began: “Double double toil and trouble!” - the witches’ incantation from Macbeth, the Scottish play. We were already in a somber mood being reminded of the tragedy of Hamlet and now, with the actors in a trance, and knowing the deviousness of Macbeth, we were scared. When the witches finished, they vanished.

There is a glass house with pink and blue swirls on a lawn near the olive grove. We lined up on the path to watch Ginna Bcharry as Lady Macbeth read a letter. She was regal in a calf-length purple coat, fastened at her neck with a large silver brooch.

At the elevator by the offices adjacent to the residence, was the climax of that Scottish play, where Matthew Cowell as Macbeth fought Rio Codda’s Macduff. It was a vicious, athletic and loud affair with kicking and clashing of swords.

On a descending staircase, Josphine Goldfarb, diaphanous in a white lace dress and parasol, queried, “Should I compare thee to a summer’s day?”

Aimèe Guillot, angelic in white robes, stationed under the haunting “Angel Go Round” lamented Sonnet 65. We left her sobbing against the plaster angels scattered on the floor.

Then there was the chaos of “A Midsummer Night’s Dream” where Bottom, a human donkey played by Jarrett Galante, was sexually accosted by Latie Linza’s Titania. The faeries, an unwieldy gaggle of pink fur and shimmering, ungainly wings, took Bottom and Titania away. We followed them to the entrance of Gallery 2 and the cast, positioned formally, like sentries, in between a row of huge palm trees. (The faeries remained in character, up on the hill, rapt with their own hilarity.)

Jonathen Blue stumbled out with a cane, an old man, only to throw off his cape and become Puck, who ended things, spritely.

We walked backed to Gallery 1 where we sipped on Champagne provided by Be Bubbly and profiteroles and berry tarts from Sweetie Pies. The actors, out of costume, came to mingle.

It was a triumphant return to live theater. This first post-pandemic, in-person performance was powerful, funny, ingenious, and glorious.

For me, what this theater event really made plain is Shakespeare’s depth, variability, creativity, and brilliance. He never did the same thing twice. Each play is a world unto itself with its own myths and traditions.

As the great institutions of Napa, like di Rosa, age -- the founders die and new management is hired -- it is imperative that these organizations find new and innovative ways of engaging with the public. And it is a balancing act: the new management must reinvent, but stay true to the founders’ principles and spirit.

The Summer Shakespeare Stroll should be a case study in how to take two organizations -- Shakespeare Napa Valley and di Rosa -- and unite them in an ingenious way that invigorates them both. This was a perfect example of that.

I didn’t know Rene di Rosa. But from what l’ve learned about him from his art collection, he would have loved this. I felt his spirit, smiling, the entire afternoon.

John Henry Martin is going to memorize the witches’ incantation from Macbeth, just so he can freak people out. Email him at jhm@johnhenrymartin.com and tell him about your favorite Shakespearean moment.

Calistoga’s Jennings performs in ‘Love, Loss & What I Wore’

Calistoga’s Elaine Jennings has been cast in the upcoming production of "Love, Loss & What I Wore," opening Aug. 12 at the 6th Street Playhouse in Santa Rosa.

Guests watch a scene from "Romeo and Juliet" at di Rosa.