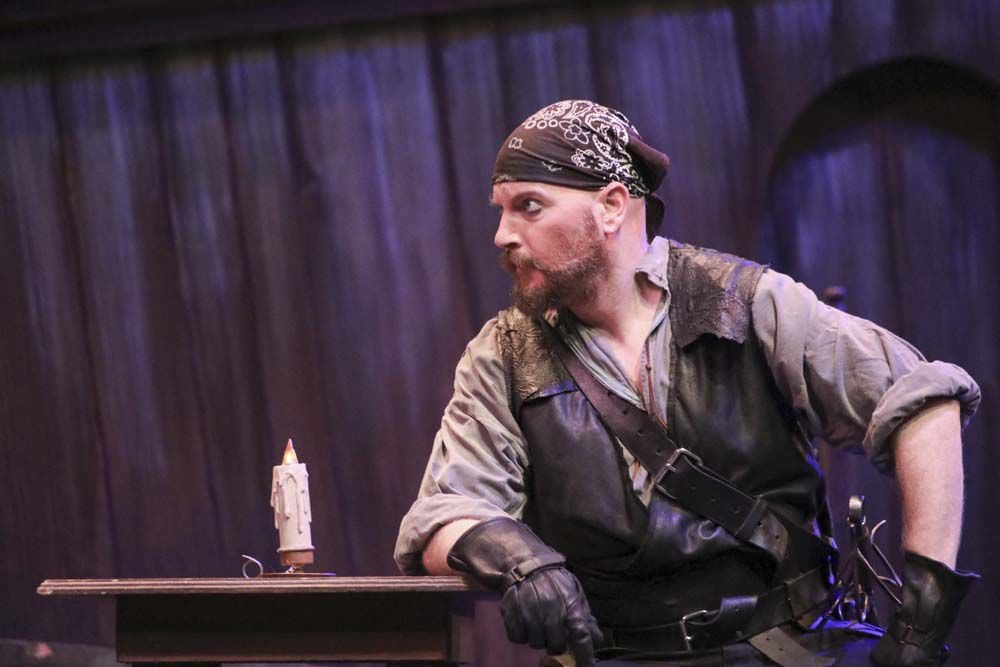 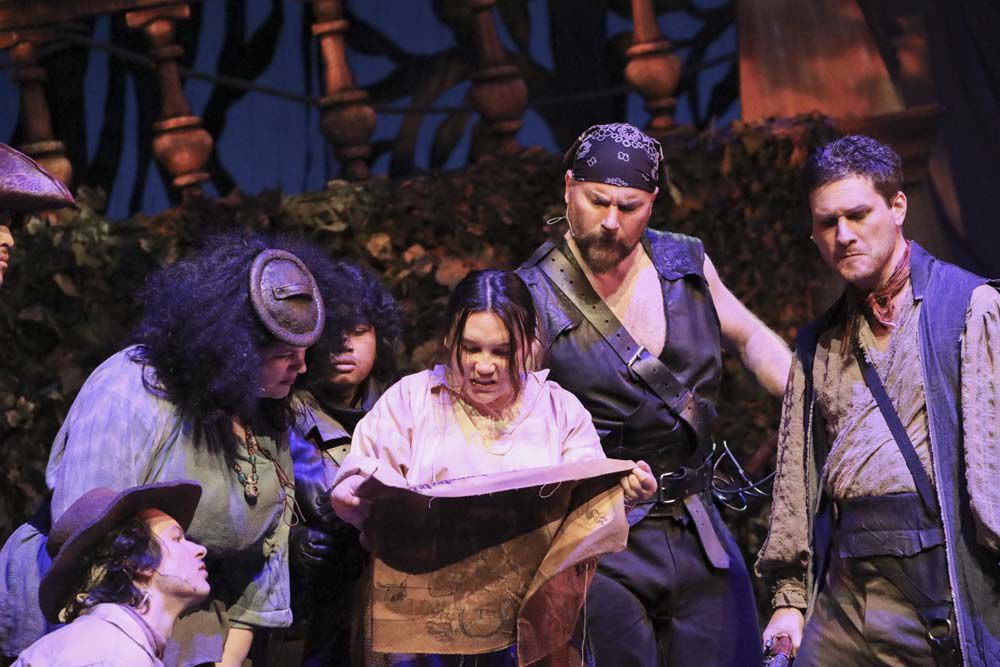 Jim Hawkins (Stephanie Terrado, center) discovers a treasure map which sets him on an adventure with pirates in "Treasure Island" at Napa Valley College through April 7.

Jennifer King and the Theater Arts Department at Napa Valley College have brought to life Robert Louis Stevenson’s tale, “Treasure Island” in a new production that would make Stevenson proud.

With an innovative set filled with trap doors and hidden closets, a pitch-perfect cast of 24, including three brilliant musicians, and lighting design that is as much a character as any of the actors, the production is two hours of dramatic, adventurous fun.

The play begins in Black Cove, a town in England where Jim Hawkins, a girl dressed like a boy, played by a lovable Stephanie Terrado, tends a tavern with her grandmother, a wiry Ginna Berry. When the salty, barrel-chested and foul mouthed Billy Bones, played by Matthew Cowell, comes in looking to stash Captain Flint’s treasure chest, he is soon followed by Chad Yarish’s Black Dog, a pirate from the ship Walrus, who is after Captain Flint’s treasure. When Billy Bones refuses to give up the treasure chest, a great fight ensues, and Billy Bones dies, but Black Dog and his crewmates must head back to the Walrus before the authorities come to arrest them.

That is when Jim and her grandmother figure out how to open the locked chest. When they do, they find nothing of value, until Jim notices a false bottom, pulls it back and finds a treasure map! Jim tells the hapless and effete Squire Trewlawney, played by Michael Waterson with a perfect aristocratic British accent, to recruit a merry band of sailors to go find the island and recover the buried treasure. What ensues is a story filled with sword fights, narrow escapes and a roiling journey on the high seas with Jim at the center of it all.

While Jim is a young man in Stevenson’s original story, Bryony Lavery, the playwright who adapted “Treasure Island” for the stage, chose to make Jim a girl, though she is called Jim throughout the play. It can be a little misleading, and unlikely given the 17th century context of the original story, that a girl would set sail to do battle with ruthless pirates, but the perfectly cast Terrado plays Jim with such pluck and glorious enthusiasm, the choice becomes not a playwright’s feminist implant, but a great detail that shows, in this age, women can do anything.

There may be no more famous fictional pirate than Long John Silver, played by a young, dashing Aaron Wilton. Silver, in disguise as a cook, convinces Squire Trewlawney to let him board the Hispaniola and set sail with the crew. Little do they know that he is the infamous pirate who eventually takes over the ship by force along with Black Dog and Jefferson Sbrissa’s imposing, Spanish-speaking, Israel Hands.

Wilton is a charming, confident Long John Silver who starts out very caring toward Jim. There is a touching scene halfway through the first act, where Silver teaches Jim about celestial navigation — how a sailor, before the advent of GPS, can measure latitude based on his location in relationship with the stars. It’s a beautiful moment, where the lights go dim, the moon rises and stars shimmer in the background against a deep blue sky. Here, Wilton’s Long John Silver wraps his arm around Jim and gestures toward the sky, evoking all the possibilities that the open seas possess. Jim twinkles as she identifies Cassiopeia and Polaris, and the moment is heartwarming. But that doesn’t last long. By the end of that first act, when he finds out she has the treasure map, Silver’s avuncular facade melts, leading him to at shoot her as she runs away.

Peter Crompton’s set is a versatile wonder, and belies a budget that is much smaller than you might expect. “It may look expensive but that is the power of great design and theater artisans on our staff and of course our students. It’s amazing what we are able to do with cardboard,” King said after the performance.

The set is composed of several staggered platforms, painted in muted yellow and green tones. In the foreground is a closet, that when open, is a hearth in which Grandma Hawkins decides to burn Captain Flint’s less important papers, and when closed, provides a wide space for the action to take place. Framing the stage are tall, soaring beams, wrapped with sailor’s rope and with horizontal beams on which hang, burnished, brittle canvas sails that look as if they’ve been exposed to salty gales for ages.

It was particularly impressive when the mast, mainsail and stern — which has three lit lanterns — descended from the fly tower to rest on the highest platform, transforming the set into the Hispaniola, complete with a huge flywheel. And for that you have to thank Matthew Cowell NVC’s resident carpenter, who also starred as Billy Bones, for perfectly executing Crompton’s plans.

The costumes were by Skipper Skeoch and just as spot-on as the acting. In the book, Long John Silver only has one leg, so they concocted a black leather splint that prevented Wilton from bending his left knee, which made him limp as this pirate should. Trewlawney wore a waistcoat with a lace collar and a wig, which gave him the authentic feel of an English nobleman, contrasting markedly with the dirty black, grey and brown costumes of the pirates.

The story of Treasure Island, since it was first published in 1883, has proven so universal that it has been adapted countless times in the ensuing 136 years, including a 1996 production by the Muppets. Stevenson said after he published the book that he wanted to write something unpretentious, made for boys who want a tale of adventure, without any literary weight. King’s production gets this just right. The play is a perfectly executed rendition of the adventure story, whose actors deliver spot-on performances of characters so well known they have practically become archetypes.

While the play is a good old-fashioned adventure story, the message behind it is that the pursuit of riches rarely brings happiness — the pirates who ruthlessly kill and fight for the treasure aren’t exactly paragons of contentment. It is in Jim’s return home to her warm and loving grandmother at the end of the play where we see what our priorities in life should be.

“I love the moral of the story searching for treasure will not bring you happiness,” King said. “It can often bring out the worst in us and with this lesson learned we are able to return home — to ourselves.”

“Treasure Island” runs through April 7 at the Performing Arts Center at Napa Valley College. Tickets are available at napavalleytheater.org.

John Henry Martin is always on the lookout for other kinds of treasure. If you know of any, tell him about it at jxxhxxm@gmail.com.

Napa Library Back Door: By the Box Book Sale begins on Thursday

With COVID-19 putting Napa library's usual book sales on hold, the Friends of the Library are trying a new approach with by-the-box sales.

Music in the Vineyards presents its 26th season in Napa Valley as a series of free, online concerts during August.

An isolation itinerary: So many places in California to get lost and find yourself

Photographer and arts consultant Ann Trinca and her partner set off on an off-the beaten road trip through California. Here is what they found.

Jim Hawkins (Stephanie Terrado, center) discovers a treasure map which sets him on an adventure with pirates in "Treasure Island" at Napa Valley College through April 7.