Become a Member
Read Today's E-edition
Share This
Sam Tubiolo: Creating the art that connects a community
Share this
1 of 10 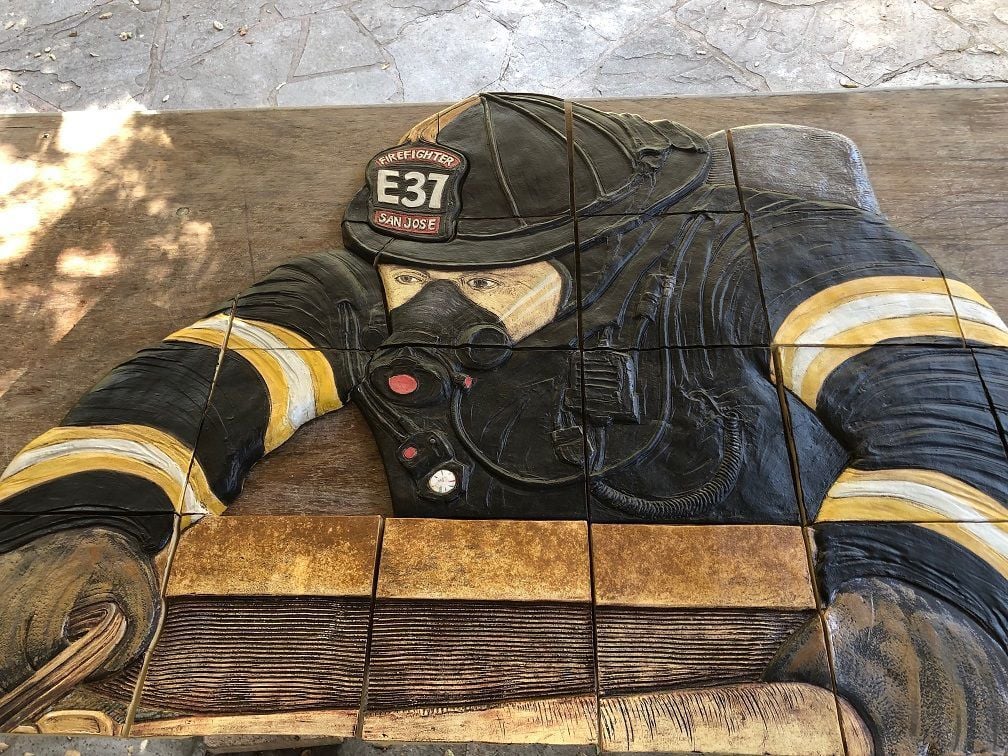 A portion of “Round the Clock Response,”  which Napa artist Sam Tubiolo created for San Jose Fire Station 37 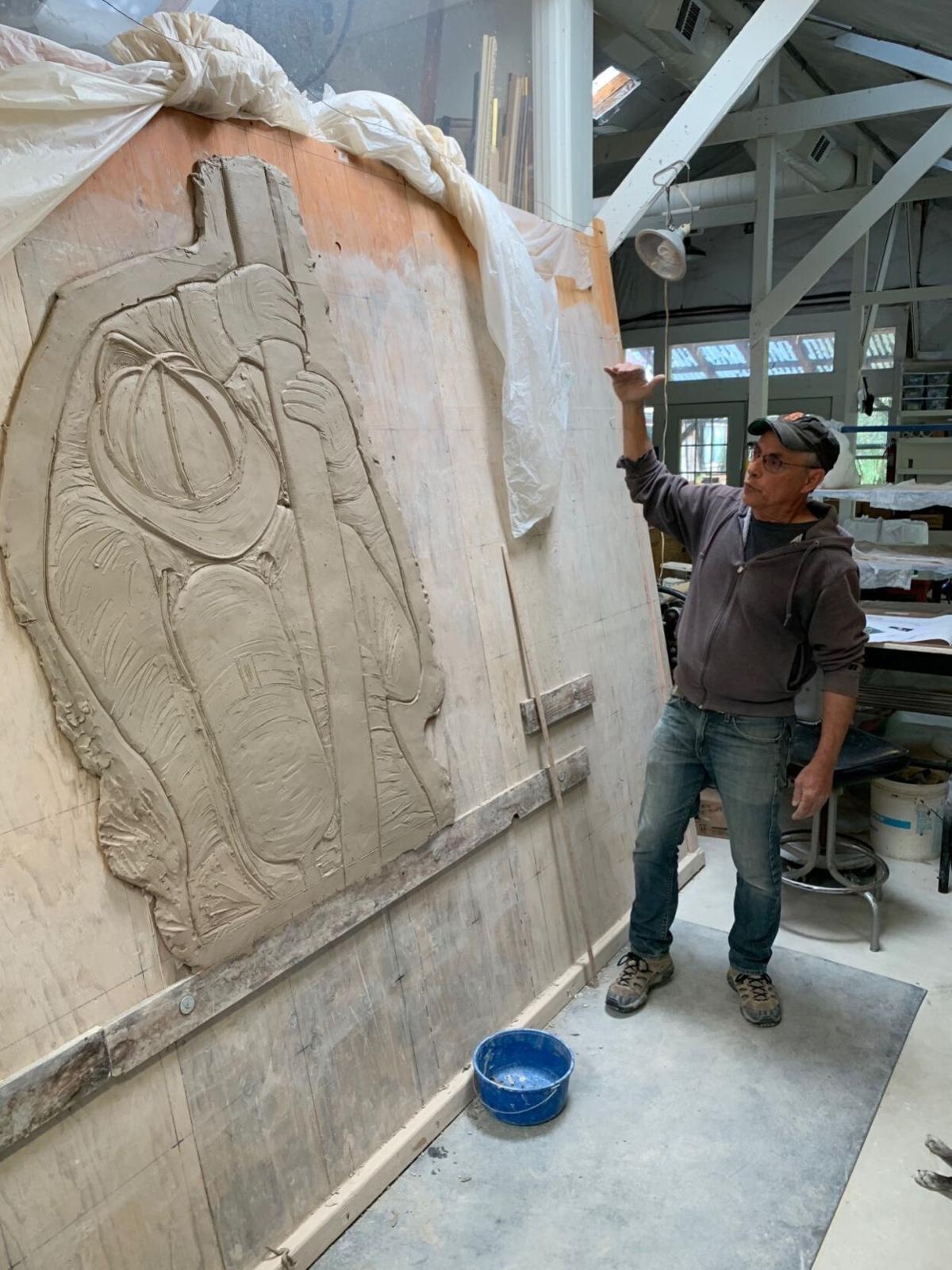 Napa artist Sam Tubiolo at work on “Round the Clock Response."

The artist's rendering of “Round the Clock Response.” 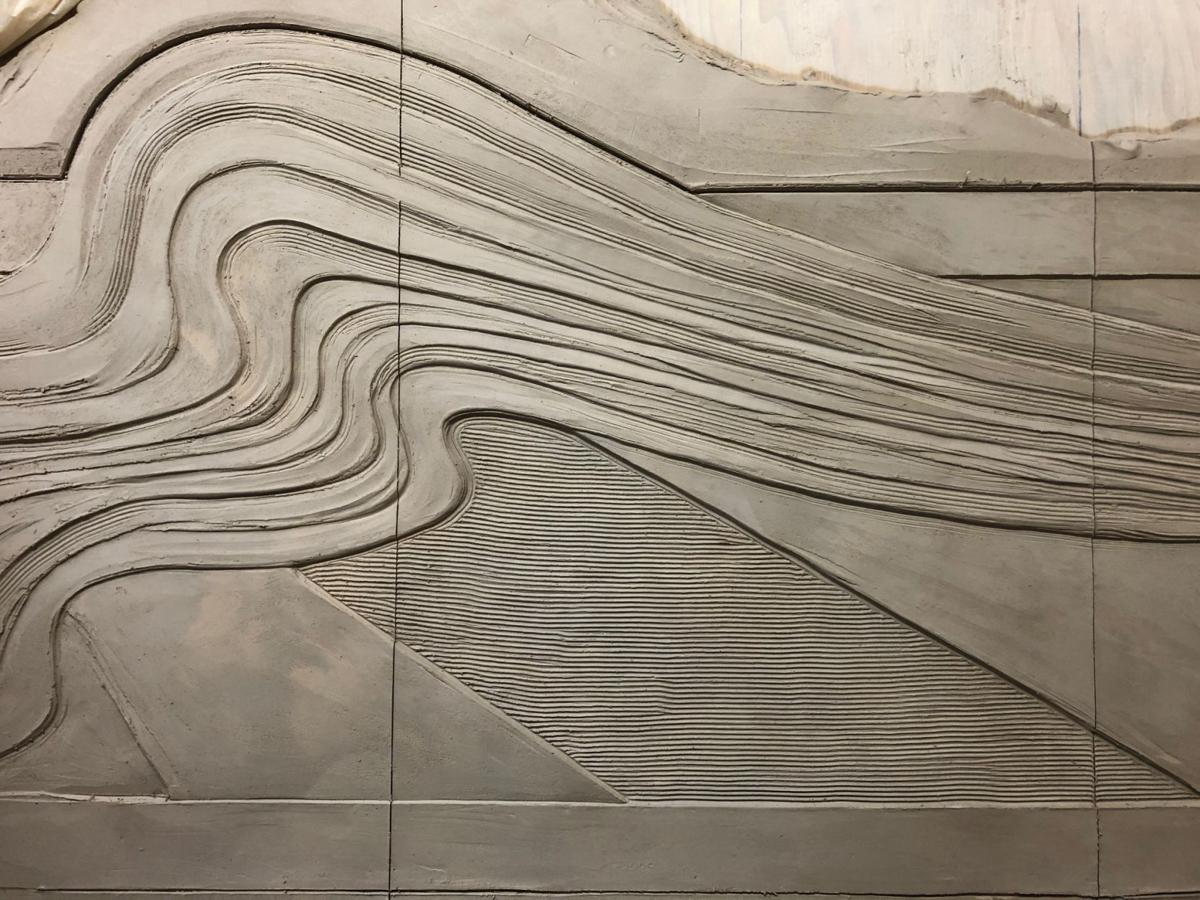 Water detail from Sam Tuiolo's “Round the Clock Response.”

A section of “Round the Clock Response,” which will be installed at the fire station in September. 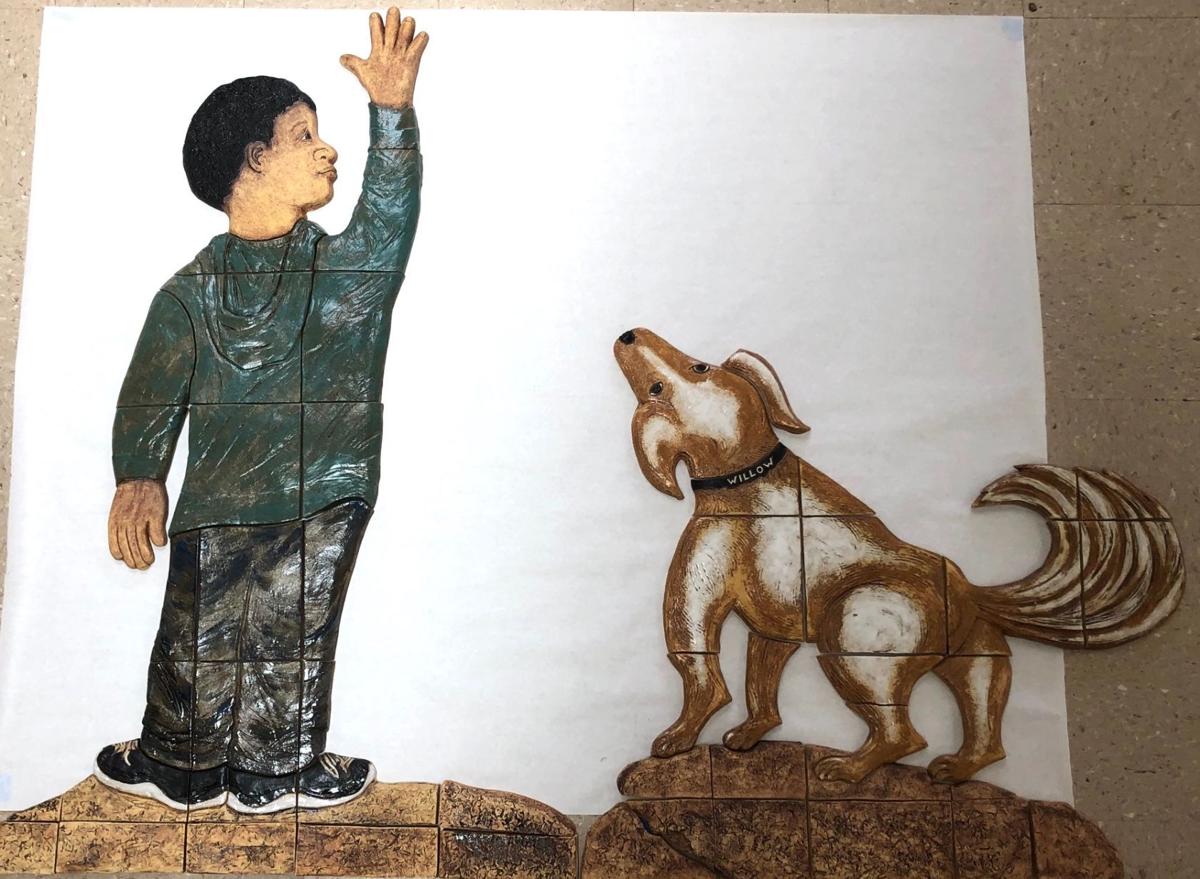 A portion of  “Round the Clock Response." 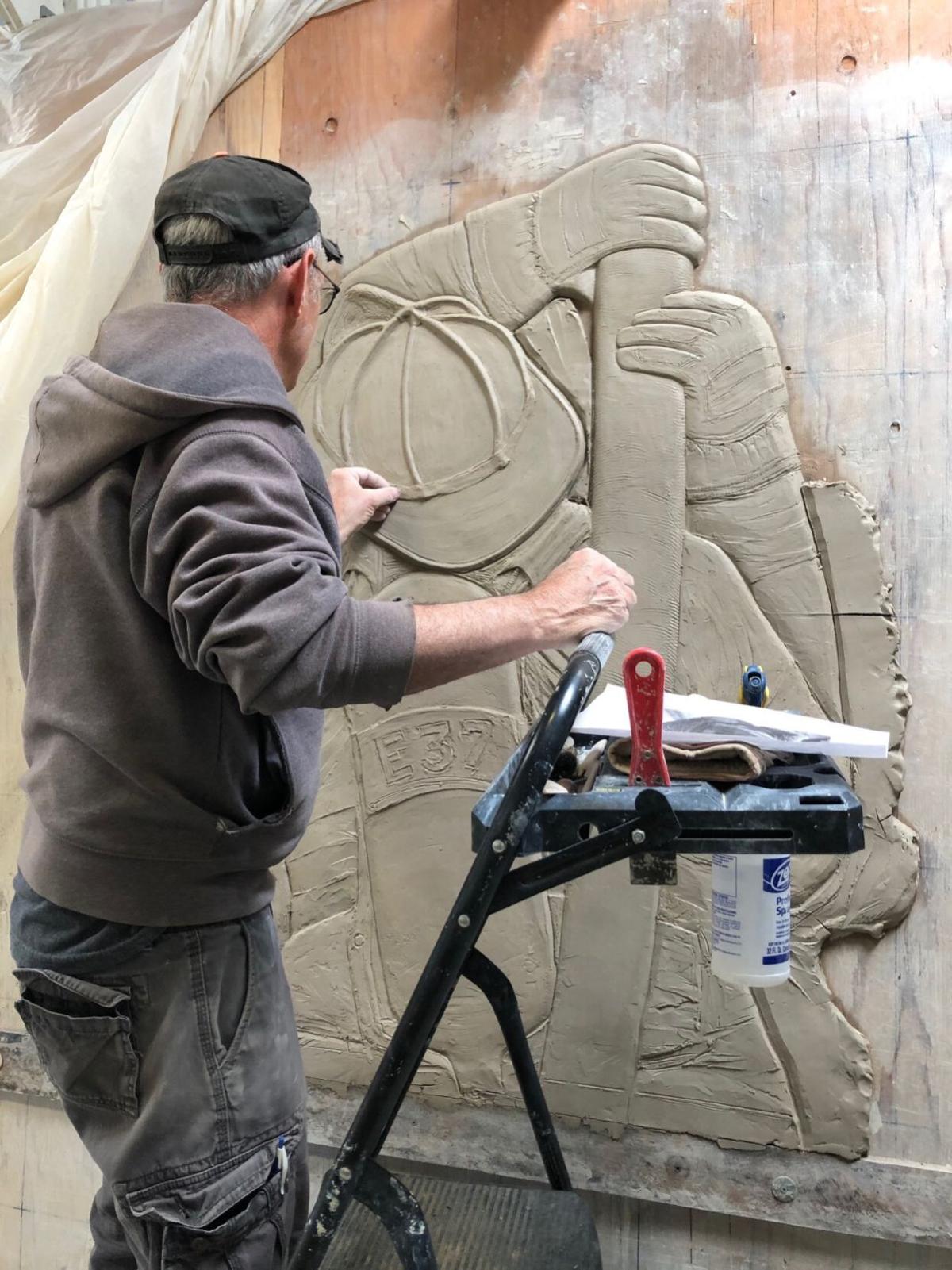 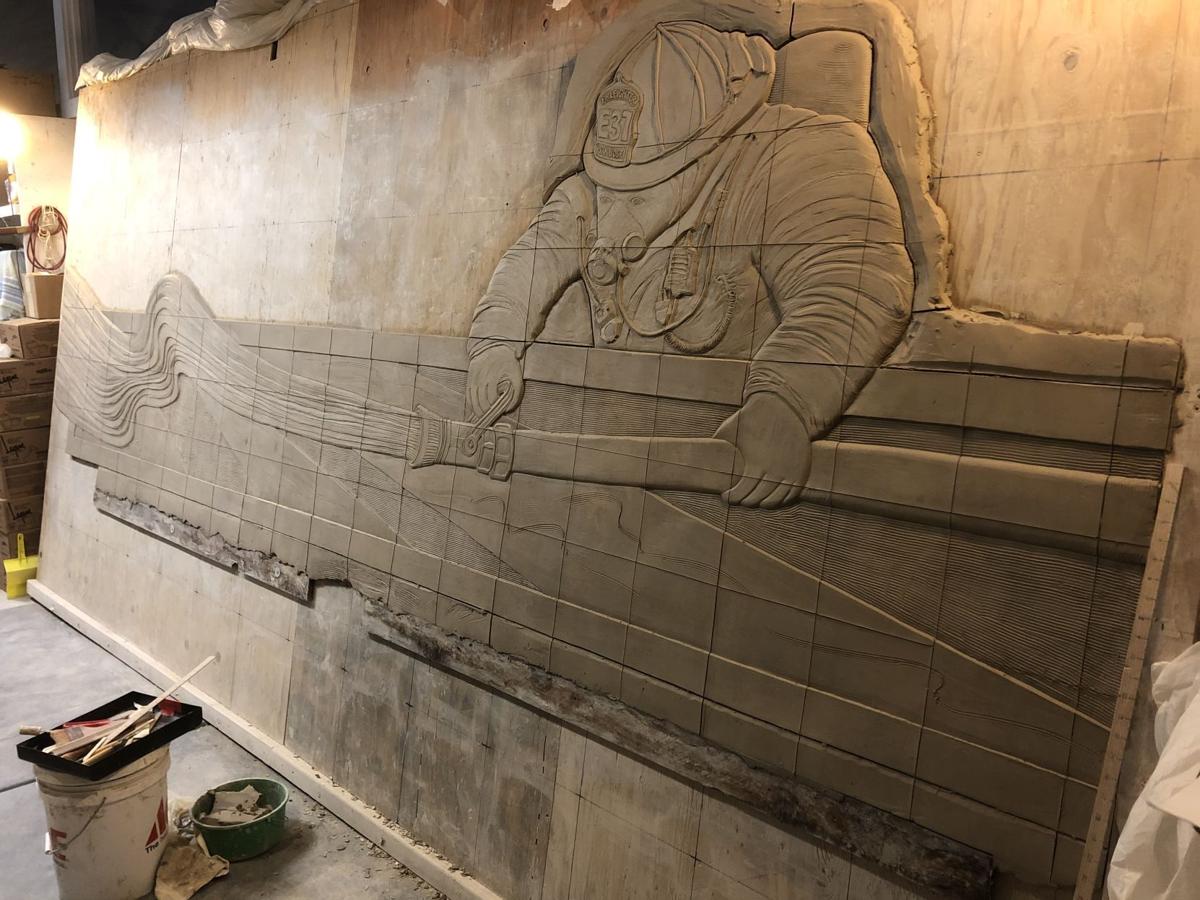 One section from “Round the Clock Response” as a work in progress. 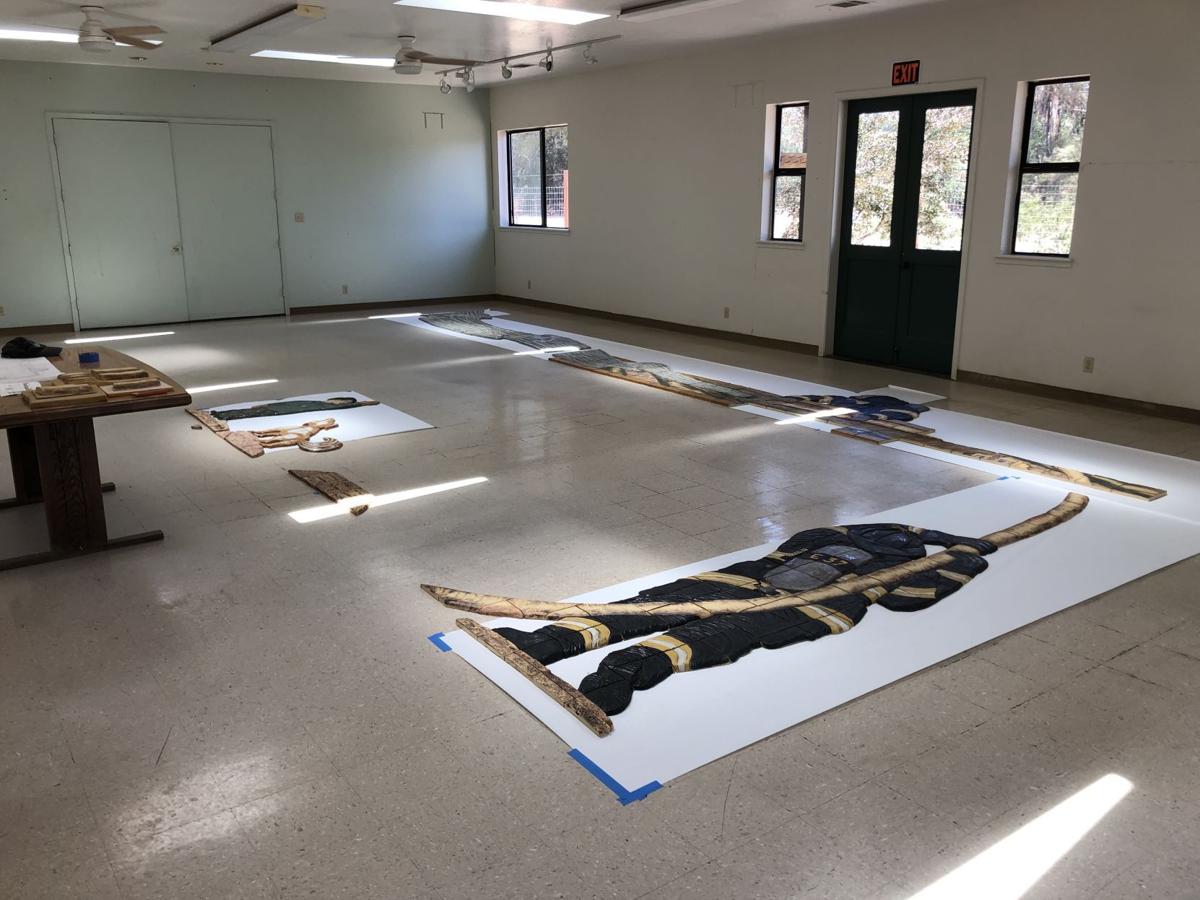 The firefighter image under construction

A section of "“Round the Clock Response."

At first glance, Napa artist Sam Tubiolo seems a quiet, unassuming man with a shy smile. Hidden beneath that façade, however, is a powerhouse of monumental artistic creativity and technical expertise.

“I wanted to be an architect when I was in school, but all the math was daunting,” he said with a soft laugh. “I turned to art, although I didn’t know how to do it.”

He graduated from the Rochester Institute of Technology having learned drawing and printmaking before receiving his MFA from the University of New Mexico and his secondary teaching credential from San Francisco State University. He worked as a cartographer and illustrator draftsman for archologists in Colorado prior to becoming a sculptor, public artist and a university and community college instructor in New Mexico and California.

His sculptures have been chosen by the national Art in Embassies program and were exhibited in the U.S. embassy in Nicosia, Cyprus. His large-scale public art includes the Hazel Avenue Light Rail Station in Rancho Cordova, Mace Ranch Park in Davis, The School for the Deaf in Santa Fe, New Mexico and Safe Harbor in Woodland (www.samtubiolo.com).

His most recent public art commission is for a frieze of handcrafted tilework at city of San Jose Fire Station 37 in the Willow Glen neighborhood.

“The theme is “Round the Clock Response” that connects the neighborhood community to the fire station and first responders,” said Tubiolo. “It’s a mural that wraps around the front of the building up to the windows of its tower. The mural part is clay, and the windows of the tower will continue the firefighter images by using a backlit translucent film for an effect like stained glass.”

Tubiolo took meticulous notes and photographs of the firefighters and surrounding community to incorporate into the design.

“I worked with firefighters in San Jose, Napa and Cal Fire to accurately depict responder equipment and turn out gear. They were specific about their types of shoes, air tanks, hoses and face shields. I wanted it precise because a firefighter would notice if it wasn’t. Willow Glen’s iconic buildings are in an Art Deco style, there’s a stone church and several buildings with awnings. All of which I have depicted in the background.”

Every element of the mural has symbolism.

“It’s a diverse community; farm workers and ag to high tech. I used the juxtaposition of the traditional tile work with the new translucent file technology to combine lighting and textures. The horizontal and vertical element, its daytime presence through night references the history and future directions of first responders, around the clock.”

“All the figures are reaching to show that the firefighters are always ready to reach out to the community. The young boy and girl are looking up. The girl is pointing at who’s directing the team, a female captain. Even the dog is looking up. The children represent the community in San Jose and its future. They may be inspired to be first responders.”

He gave a presentation of his design to the San Jose Art Committee in 2019, which was accepted. Because of the pandemic, though, the fire station construction was delayed by a year.

“The San Jose Art Committee was familiar with my work from the tile artwork I’d recently done for their Alviso Storm Pump Station. I started fabrication of the fire house mural in early 2021. It will be installed in September and will take about a week for the tile contractor to set it in place.”

“I’d previously completed a terracotta bas-relief on an historic firehouse in Sacramento, Station 20. I take the time to depict first responders with respect and care.”

Tubiolo mixed his own special glazes for the various shades of blue and brown throughout the San Jose piece.

Remarkably, considering the enormous scale of most of his public art projects, he works alone most of the time.

“I may use only one or two assistants when I need help throwing the clay on the easel.”

The mural easel is a large piece of plywood, which leans slightly against a wall. Clay is placed, or thrown, onto the easel in roughly the design needed. By the time he’s ready for that stage, Tubiolo has already made sketches and final drawings of his design on gridded drafting paper and blown it up to actual size on large sheets of white paper. He then methodically lines up the paper against the clay and pricks its outline and basic details with a pin to then be sculpted into its final form.

The last steps before firing are carving out the finer details of faces, hair, shoes, water and so forth on the clay. Then the clay is divided into tile grids and brought to one of his two kilns, first for the bisque firing, to transform the unfired dry clay to a porous state that’s ready to accept glaze and, finally, to glazing and the second firing.

All the tiles must then be inspected for cracks or imperfections, laid out, painstakingly packed in uniformly sized cardboard cartons and shipped to the site for installation.

For the Station 37 project, he made several extra tiles of the hose in case any measurements had changed, or an additional feature was added after the original plans.

“For example, the last time I visited the firehouse construction, a downspout had been added to the front of the building. Those details have to be considered in the overall mural and the tile placement may have to shift slightly.”

The entire process takes a combination of creativity and precision. Tubiolo explains that practical details are a necessity for public artists.

“Public art is creative problem-solving. People are inspired by what they see or hear, like music, whether it’s going to be outdoors or in a vibrant urban environment. This art connects to public with art and makes sense of what the community is about. I think, “Who will see it and how will it impact them?” It allows people to stop for a moment to enjoy and wonder. The wonderment of life is creativity.”

City of Napa's Make it in Napa Initiative rolls forward

The city of Napa is figuring out how best to support local makers and manufacturers with the Make it in Napa Initiative.

A portion of “Round the Clock Response,”  which Napa artist Sam Tubiolo created for San Jose Fire Station 37

Napa artist Sam Tubiolo at work on “Round the Clock Response."

The artist's rendering of “Round the Clock Response.”

Water detail from Sam Tuiolo's “Round the Clock Response.”

A section of “Round the Clock Response,” which will be installed at the fire station in September.

A portion of  “Round the Clock Response."

One section from “Round the Clock Response” as a work in progress.

The firefighter image under construction

A section of "“Round the Clock Response."