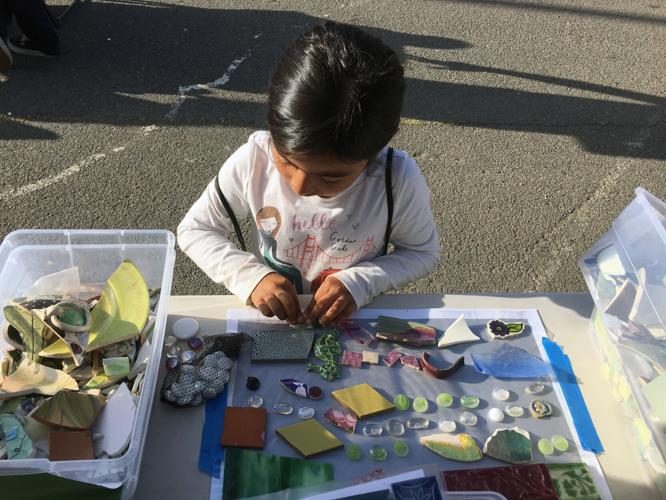 A student at Shearer Elementary School in Napa works on the Quake Mosaic. A portion of the project, which will fill the side of a rail car, will be on view at the Napa Town & Country Fair in front of Chardonnay Hall this week. 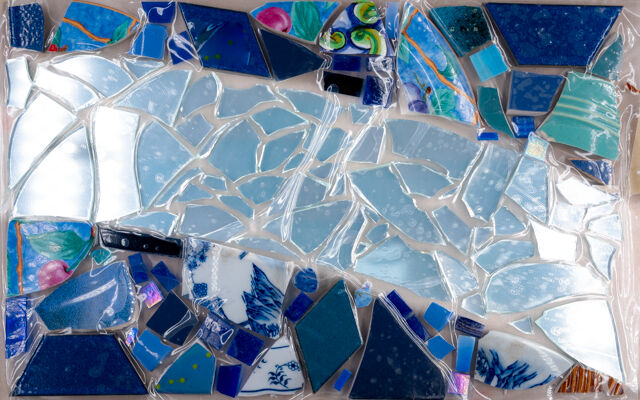 A portion of the Quake Mosaic, created from the remains of many local treasures shattered in the 2014 South Napa earthquake. 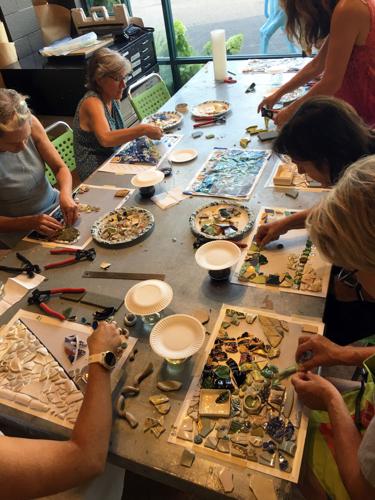 Participants work on portions of the Quake Mosaic at a workshop at Nimbus Arts in St. Helena. 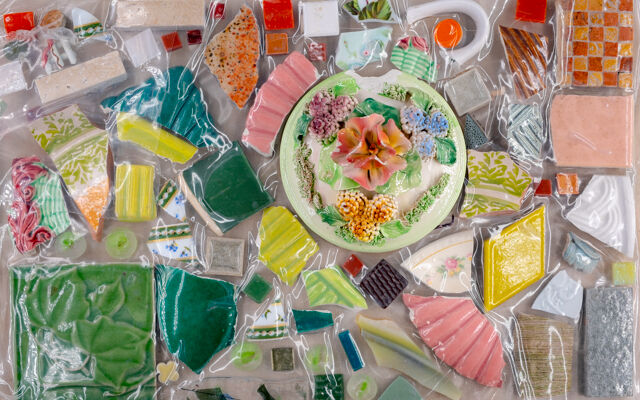 Napa County residents turned objects broken by the 2014 earthquake in to a community work of art.

Realizing a complex public art project can be as shaky as the magnitude-6.1 South Napa earthquake of Aug. 24, 2014.

Young is the lead artist, project manager and “shepherd” of the Quake Mosaic, an artist-led, community-built work created to document and honor the aftermath of Napa’s natural disasters. A nearly 10-year trajectory, full of shakes, rattles and rolls is leading toward a projected 2024 completion for the public and privately funded work of art.

“Rather than a reminder of loss,” said Young, “it’s meant to symbolize healing, recovery and strength, and to help inspire people to find beauty and meaning by supporting each other after trauma.”

The genesis of creating this large artwork to memorialize a terrifying quake (and subsequently, the 2020 wildfires) began to take shape when Young, who was then managing the Grand Hand Gallery in downtown Napa, found the contents of the store decimated post-quake.

Soon she was hearing countless stories of loss from friends and neighbors. The remains of cracked and broken collections of ceramics and glass began pouring in.

“I met with a few other artists who wanted to do something with the material/concept,” Young said, “so I set up the gallery as a collection point through about October 2014 and worked with several volunteers to sort by color and material over the next year.

“I had literally tons of material but no design yet. I really believe in site-specific design, so I needed a location and substrate before I could go any further.”

By 2016 Young and the Rail Arts District had formed a partnership to create and install the Quake Mosaic. The RAD is a two-mile linear arts area that runs adjacent to the Napa Valley Wine Train tracks and the Napa Valley Vine Trail through the heart of downtown Napa.

The Wine Train then donated a train car to be used as a substrate for the mosaic. Placement of the car was to be off the tracks near Soscol Avenue and below Vallejo Street in downtown Napa, part of RAD’s Southern Gateway.

With two crucial partnerships in place, Young set about creating a design to grace one side of the 12-by-40-foot rail car. The final image, containing more than 31,000 shards grouted into 406 separate sections, is meant to resemble a rectangular “core sample” of the earth, sitting on top of the ground, composed of horizontal bands of various sizes, shapes and colors.

In partnership with the Napa Town & Country Fair taking place Aug. 11 through 14, fair-goers can catch a preview of 80 sections of the Quake Mosaic (or a fourth of the total design) attached to a temporary 8-by-20-foot wall in front of Chardonnay Hall. For fair tickets and information, visit napafair.org.

“(The) new CEO Corey Oakley reached out about adding more art elements to the fair,” said Young. “When he heard about the Quake Mosaic, he got really excited and worked with me to find a way to showcase part of it at the Expo in time for this year’s event. He’s been incredibly supportive, and I’m thrilled he’s working with local artists to re-imagine what the fairgrounds can be for Napa’s future.”

Residents have swept up broken china, and businesses have straightened and reopened their shop floors, since the Aug. 24 earthquake rocked Nap…

Young’s deep roots in the community enabled her to enlist the support of hundreds of volunteers, students, business owners, nonprofits, funders and fellow artists in the realization of her multilayered vision.

Since 2016 Young has held more than 50 workshops in schools, nonprofits and in her own studio with over 1,000 community members, old and young alike, helping to create the bulk of the mosaic’s design.

See a glimpse of “Sort Day” in 2017 with New Tech students at www.youtube.com/watch?v=TRKt7V5JiOM.

Phase one of the design and construction of the Quake Mosaic was well underway when in 2019, the Oxbow Commons flood bypass project’s new floodplain-designated area in downtown Napa prevented the rail car from being placed at that site.

Young had always been adamant about the minimum requirements needed for the Quake Mosaic’s landing — in downtown close to the area where so much of the significant earthquake damage had taken place; in an area that would provide safe, easy and free access to all; and ideally in a green space of some kind to provide a site for calm reflection.

It was also imperative to Young and her collaborators that the public have easy access to the work, both to find their shard donations as well as the sections they had worked on. In addition, the Quake Mosaic site needed to be viewable from a distance so that the whole of the design would make visual sense.

The search for a new location began. By 2020, however, the coronavirus pandemic hit, forcing the project to go dormant for two years.

Thanks to a re-commitment this year from the Rail Arts District, the Napa Valley Wine Train and with the help of a Leadership Napa Valley practicum group, partners are fully back on board to help secure a permanent location and raise completion funds for installation, site prep, engineering and landscaping, thus completing phase two of the Quake Mosaic project.

To make a charitable donation, visit radnapa.org. For additional information about the Quake Mosaic and to learn about the public and private artworks created by Kristina Young, visit www.studiokly.com.

Watch Now: Japan feels the effects of an earthquake, and more of today's top videos

The curfew comes as Moscow has intensified attacks on Ukrainian cities, including the capital, Kyiv.

Russia has not yet made its way into the city, but they are now beginning airstrikes. Veuer’s Tony Spitz has the details.

He’s set to come home in just a couple of weeks aboard a Russian Soyuz rocket.

Concerns deepen over the security of Ukraine’s nuclear power plants

A nearby attack by Russian troops fuels fears the nuclear power plant in Varash could be the next target.

Racing to find survivors - a landslide buries dozens of homes in a Peruvian mining town.

Tombs and sarcophagus of discovered under Notre-Dame Cathedral

Archaeologists have uncovered several tombs and an ancient lead sarcophagus likely dating back to the 14th century, under the Notre-Dame cathe…

At an auto repair shop in Kyiv, mechanics used to working on car engines are instead applying their skills to heavy weaponry captured from Rus…

Basements and babies: A night on a Ukrainian maternity ward

It is 6:00 pm when the sinister wail of the siren rises above the southern Ukrainian city of Mykolaiv. Very calmly, hands on their bellies, th…

The Napa fair comes back this week with all the trimmings — including new trimmings like a makers' market, wine lounge and more.

A student at Shearer Elementary School in Napa works on the Quake Mosaic. A portion of the project, which will fill the side of a rail car, will be on view at the Napa Town & Country Fair in front of Chardonnay Hall this week.

A portion of the Quake Mosaic, created from the remains of many local treasures shattered in the 2014 South Napa earthquake.

Participants work on portions of the Quake Mosaic at a workshop at Nimbus Arts in St. Helena.

Napa County residents turned objects broken by the 2014 earthquake in to a community work of art.