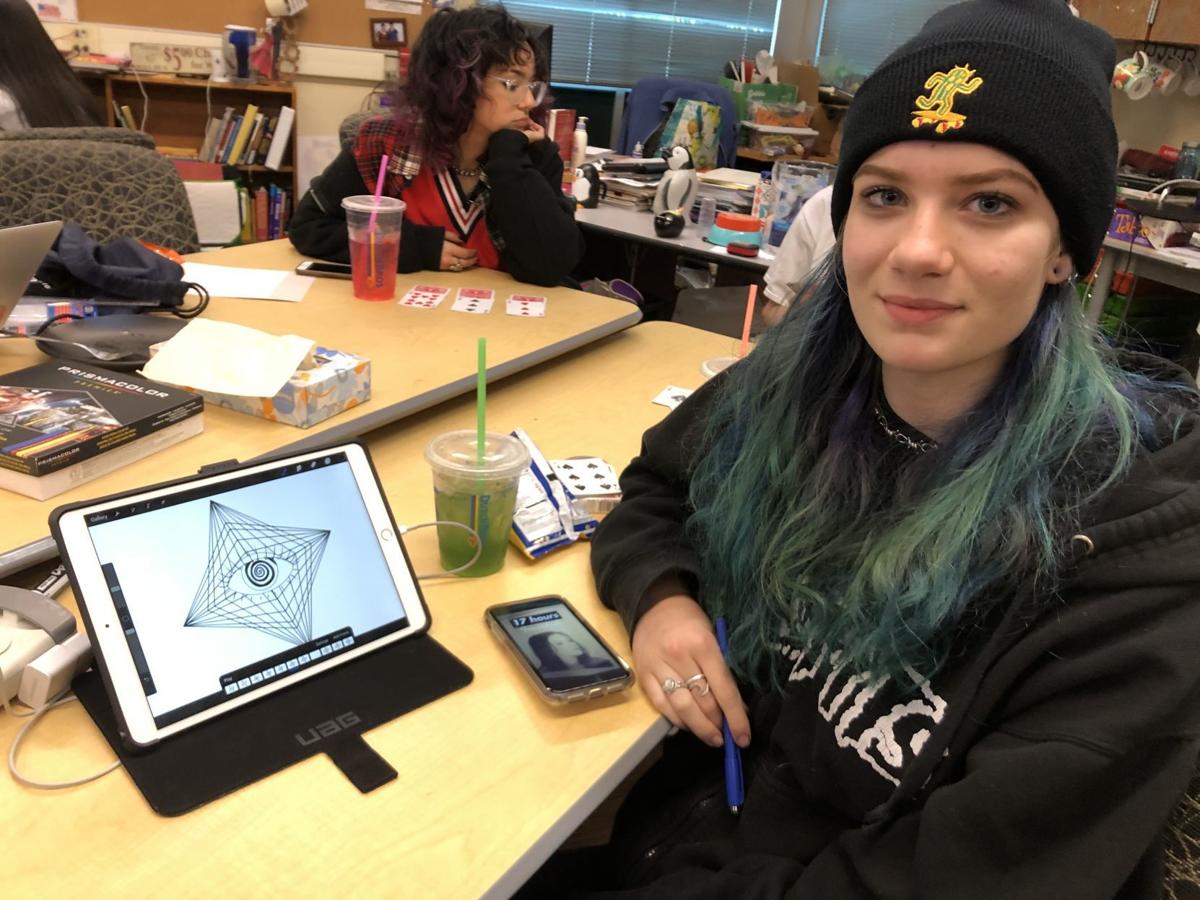 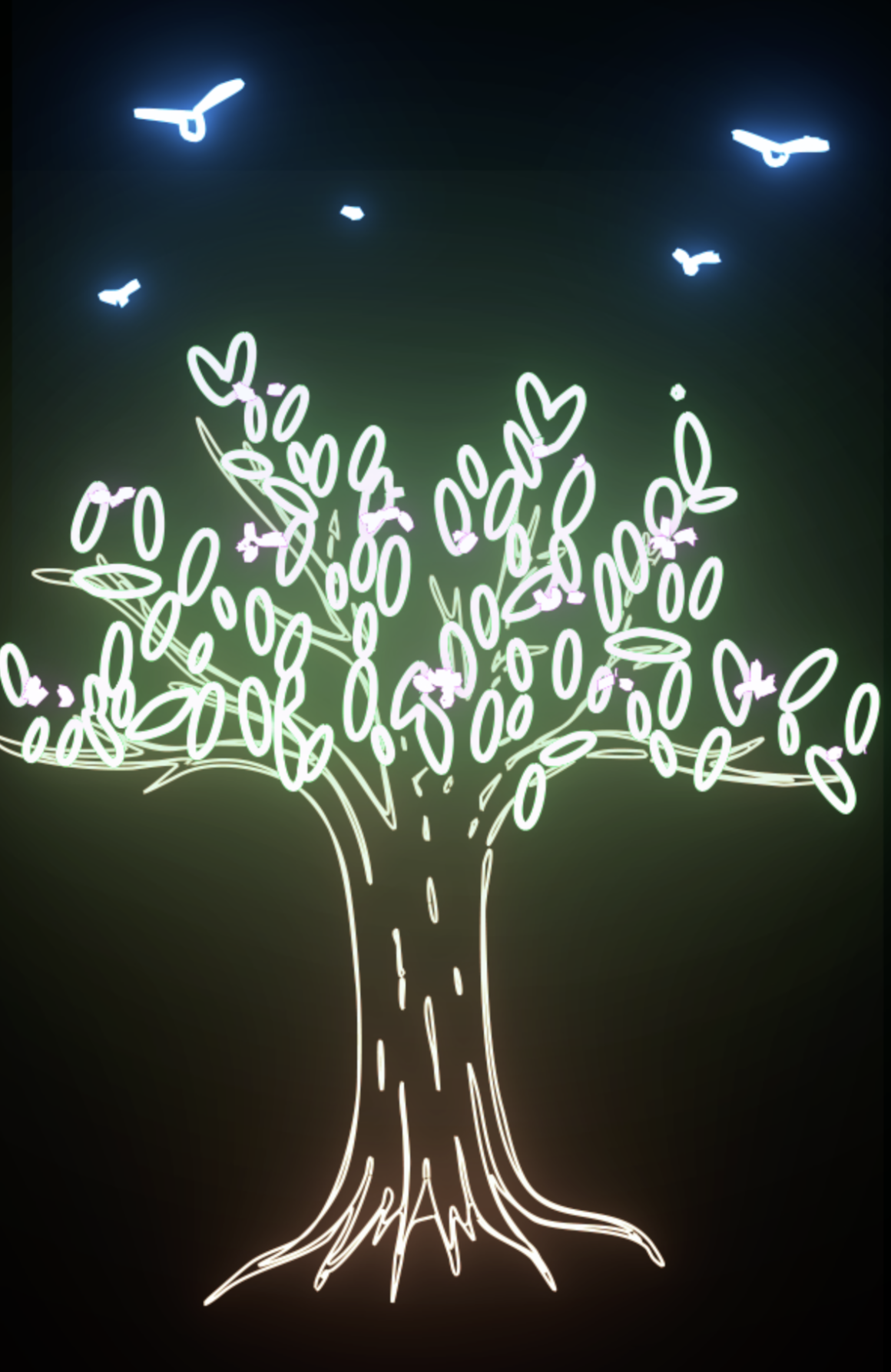 Lisa Gottfried, a digital design instructor, and her students at New Technology High School held their second annual “Create-a-thon” on Jan. 13. It was an intensive one-day, school-wide design project.

Students spent the day creating unique designs using the Creative Cloud, Adobe’s cutting-edge multimedia design software. The designs were then projected on the AT&T building at Clay and Randolph Streets as part of the Lighted Art Festival.

The entire school was a hive of activity. Students, solo and in groups, were huddled around huge Apple computers, studiously adjusting the colors and shapes of their designs in Adobe illustrator.

Last year, the event was contained to New Tech. Keeping everyone connected was the job of Max LePage, who was walking around with an iPad on wheels, rigged like it was an IV pole in a hospital. “This is the cat stand,” he said. On the iPad were live video feeds from web cameras stationed among the remote collaborators. “I’m basically the hub. People ask me questions, and I get them answers” he said.

Other students were busy putting the final touches on their designs. Jillian Arcadi, Fynn Foster, Leah Condon and Olivia Salaise were huddled around a large Apple computer screen, animating their design. It was a tree that starts out bare, but then leaves grow on the branches and birds flap their wings above. “The theme is “renew,” and we thought a tree regenerating its leaves would be a good idea,” Arcadi said

Another student, Katy Tronstad, was sitting, using a stylus to adjust her design on an Ipad. On the screen was an eye, encased by a diamond shape. The diamond shape rotated, while the eye blinked. The effect was a little unsettling.

Tronstad explained how she came up with the idea, offering an insight into her creative process. “I’m not really sure,” she said. “I knew I wanted something geometric. I just started off with a diamond shape. Then flipped it on it’s side, and ended up liking it. Then the middle was kind’ve cloudy and I didn’t like it so much. I wanted to incorporate something and I draw a lot of eyes. There’s no rhyme or reason as to why I did what I did, but I just started playing around with it. Now I am trying to make it neon frame by frame. I’m thinking a purple or a blue for the geometric shape in the back, I’m not sure about the eye yet.”

She began to explain how each frame was a different picture, and in order to change the image, she had to change each frame. The principles of animation, where the animation itself is just a succession of slightly altered pictures, holds true. She was able to flip back and forth between frames, using the stylus, with nearly subconscious ease.

Susan Miller, principal of New Tech, says that the Create-a-thon is in line with New Tech’s mission of providing project-based, real-world education. “This aligns really well with that mission because the kids are creating something for a public event,” she said. “They’re interacting with industry experts. I think this is an example of a high level project where the kids can learn skills for something that happens in the real world. It’s exactly what we do here at New Tech.”

Every student at New Tech takes a digital design and coding course their freshman year so most of the students were already familiar with Adobe’s software. In addition to project-based education, every student is required to do a 60-hour industry internship. Students have interned at Adobe and in a neuroscience lab, among other places. One student interned with a mechanic and got a job at NASCAR.

Each student also completes 12 college units that are transferable to CSU or UC schools. There is a community service requirement and, during their senior year, they have a capstone project and graduate with a digital portfolio.

“We think that the extra things the kids do here make them very prepared for success when they leave,” Miller said. “We focus very much on preparing kids for college, career, life and beyond. We have a high persistence rate, so where kids decide to go after school, they stay at it. It’s like 90%. So we really try to help them pick the right next step.”

Gottfried, the digital design instructor and creator of the Create-a-thon, is an Adobe Education Leader, one of 280 internationally, and had done an externship at the company. Because of this relationship, she convinced Adobe representatives to come for the day to teach the students the finer points of the design software. They were happy to do it.

One of those representatives was Ben Forta, a Senior Director of Education Initiatives. His job is to get the Adobe software to the kids. “It’s my job to get this next generation of content creators excited about creating things” he said. “I want them to create their own content, not just consume other people’s content. They have a voice and we want to help them find it.” Gottfried’s Create-a-thon fits right in with this directive.

Forta explained that at one time, creative professionals had a monopoly on the Adobe software. But Adobe wants to change that. “Within the past few years we’ve tried to figure out how to democratize the creative process,” he said. “How do we engage the people who don’t think they’re creative, or aren’t creative yet? There are actually a lot more of them. They all have ideas, opinions and stories to tell. How do we let everyone, regardless of their creative background or economic status, how do we give them a way to tell their story?”

Furthermore, Adobe is anticipating the change in skills kids need if they are going to be successful in our modern, creative economy. “If kids go to school and they haven’t learned how to create an image, create an infographic, show an idea is visual form rather than write a 2,000-word paper like we did in school, they’re set up to fail because that is not how we’re going to communicate in the future,” he said. “So it is critical that the kids have the right tools.” So Forta and his colleagues at Adobe are happy to spend the day at New Tech, sharing the miracle of their software and preparing students to be successful in tomorrow’s workforce.

He added, “Being in an institution like this, this is unusual. These kids are super talented. I want everyone else to have the ability to do what these kids are doing.”

On Jan. 17, the students’ art work was displayed on the AT&T building. The variety and creativity were stunning. Music was playing—a slightly foreboding, trance-like piano repeating the same tune over and over. On the 70-foot wall, the succession of images was like a peek inside the teenage mind.

There was a butterfly, a sun rise and a cat in a tuxedo. Squidward from Spongebob Squarepants and an image of the sun and moon with an exhortation to dream.

Then, a soccer ball flew through the air and Baby Yoda laughed. There were butterflies and dandelions and Groot from Guardians of the Galaxy. Two faces, with brains exposed, stare into each other’s eyes. There was a heart with a tulip inside and a dove in flight. A phoenix burned brightly, and octopus floated by and then came a fat cat with an umbrella. There were windmills in the wind, a victrola, Oscar the Grouch and an owl. And then there was Katy Tronstad’s rotating, blinking eye, in her neon colors.

Then a more extended sequence—a parody of Star Wars that involve cats, dogs and fish, where the cats and dogs flew spaceships and carried machine guns. Then there was a magical neon forest filled with mushrooms where three bucks gingerly approached a pond and began to drink.

About 25 people standing on a cold night across the street from the building, enjoying the images. At the end, the teenage artists were credited, and the group spontaneously erupted into applause.

Tours of New Tech are given monthly. For more information, call 707-259-8557 or visit www.newtechhigh.org.

Video, lasers and music are giving an artistic bend to Napa landmarks during the city's third Lighted Art Festival, which runs nightly through Jan. 19.

What should you get your sweetie for Valentine's Day?