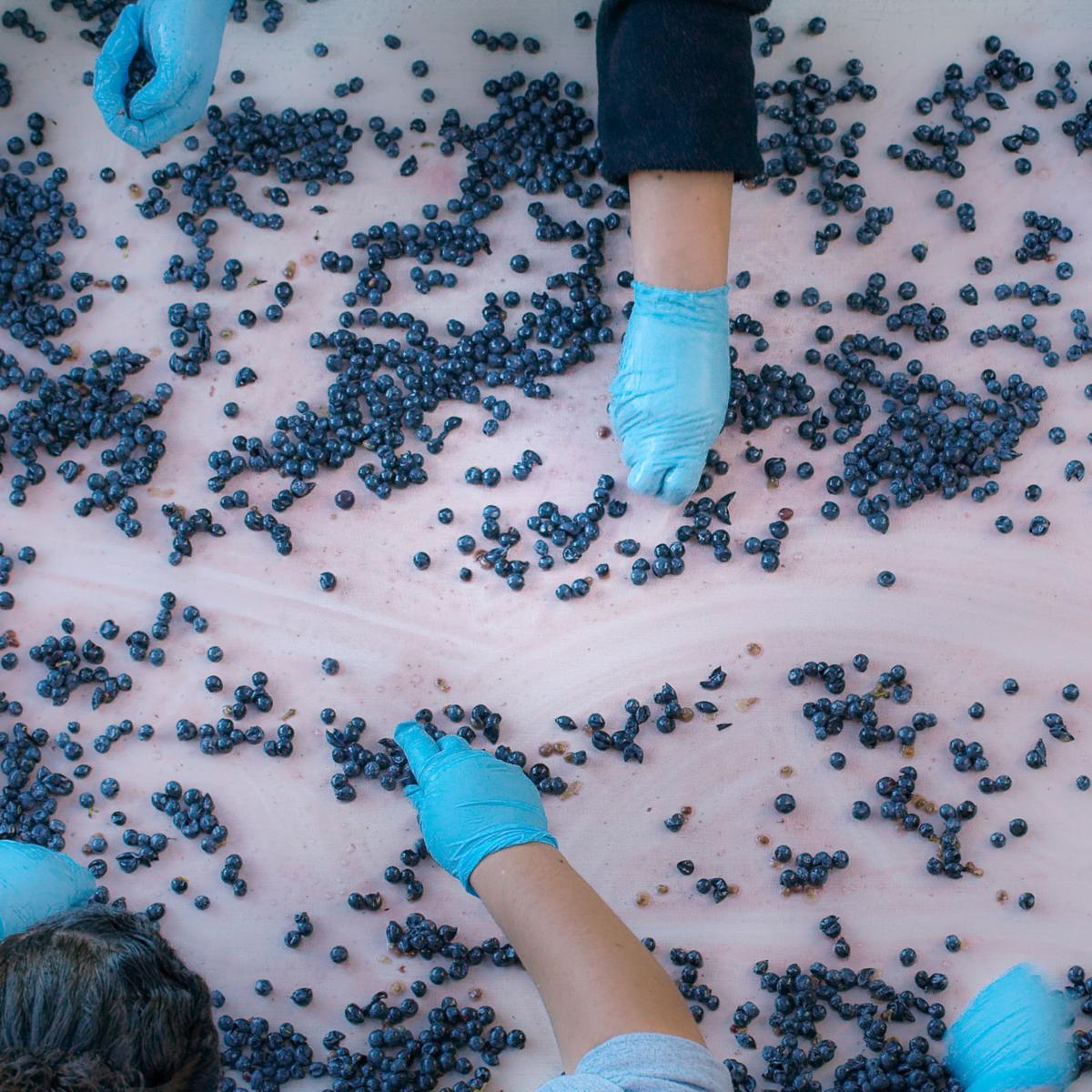 “Decanted” will receive its world premiere at 1 p.m. Friday at Napa’s Uptown Theatre as part of the 2016 Napa Valley Film Festival.

The amount of blood, sweat, talent and luck that goes into the art of winemaking often goes unnoticed, says filmmaker Nicholas Kovacic, so he set his sights on a documentary depicting “all the hard work that goes into a bottle of wine.”

“My inspiration for the film started with history and legacy,” Kovacic points out. “Napa Valley, California, is this place where history and legacy are really starting now to intertwine creating some lasting effects on global wine.”

“The film is also inspired by American perseverance. Even though Napa is very culturally diverse there is Wild West feel to wine and that’s something you can only find here in the U.S. To have the opportunity to tell a little bit of that Napa story from a contemporary perspective is very special to me.

“’Decanted’ is a contemporary history in the moment of this place and time. The film shows the enduring effects Prohibition has caused the American wine industry. Napa Valley has been lucky and blessed with amazing pioneers to really bring back the art of wine and winegrowing post-Prohibition, and now Napa is multi-generations into producing amazing wine.”

Named the 2014 New York City Food Filmmaker of the Year and recipient of a 2016 Emmy nomination, director Kovacic gets to the heart of the matter through interviews with valley winemakers, asking them why they chose a career in the wine business.

“I make wine because I need the intellectual challenge and the satisfaction of crafting something beautiful for those that will appreciate it,” says Aaron Pott. “I look forward to those foggy, pre-harvest mornings when you taste the grapes and begin to imagine what they will do in the glass.”

Addressing his latest effort, Kovacic points out “Decanted” is a feature-length documentary “that tracks the trials and tribulations of winemaking in the Napa Valley, and discovers what it takes to create a new winery from the ground up. From the initial growth of the grapes all the way to the fermentation process, there are infinite ways to create wine.”

A second screening is offered at 9:45 a.m. Sunday at Freemark Abbey in St. Helena.

Both narrative films and documentaries being shown at this week’s Napa Valley Film Festival were selected for competition.

Director Bill Purple’s “The Book of Love” follows Henry, an introverted architect, and his free-spirited wife, played by Jason Sudekis and Jessica Biel. After the death of his wife in a car accident, the architect sets out to help Millie, a homeless teen, to build a raft to sail across the Atlantic. The teen is played by Maisie Williams. Also starring Mary Steenburgen and Paul Reiser, “The Book of Love” will be screened at 8:30 p.m. Thursday at Lincoln Theater in Yountville, at 5:15 p.m. Saturday at Calistoga’s Gliderport and at 8:30 p.m. Sunday at Napa’s Uptown Theatre.

Also in competition is “Love Is All You Need?”, which explores bullying, racism, and prejudice in a way never done before on the big screen. Teen suicide in the LGBT community is an issue director Kim Rocco Shields tackles head-on in this feature film where homosexuality is the norm. A favorite entry of festival directors, “Love Is All You Need?” will be shown at 1 p.m. Thursday at Yountville Community Center, at 1:15 p.m. Friday at Cameo Cinema in St. Helena, at 8:30 p.m. Saturday at Napa’s Uptown Theatre and at 5:15 p.m. Sunday at Calistoga’s Gliderport.

Another competition film is “Sticky Notes,” the story of Athena (Rose Leslie), a struggling dancer trying to make it in Los Angeles. Athena’s father Jack (Ray Liotta) interrupts her lonely and detached existence when he asks her to move home to Florida to care for him — he has cancer. “Sticky Notes” screens Friday at Calistoga’s Gliderport, at 9:30 a.m. Saturday at Napa Valley College and at 8:30 p.m. Sunday at Lincoln Theater in Yountville.

In director Doug Archibald’s “I Love You Both,” Krystal and Donny are a pair of co-dependent twins still living in a one bedroom house together deep into their late 20s. The affable pair confront a unique new challenge when they both start dating the same man. Screenings are scheduled at 8:15 p.m. Friday at the Yountville Community Center, at 8:15 p.m. Saturday at Calistoga’s Gliderport and at 5 p.m. Sunday at Napa Valley College.

Director Rob Meyer chronicles the challenges of an interracial family in “Little Boxes” as members struggle to acclimate when they move from New York City to a small, predominantly white town in Washington State. “Little Boxes” will be shown at 9:30 a.m. Friday at Charles Krug Winery, at 10 a.m. Saturday at Calistoga’s Gliderport and at 5 p.m. Sunday at Yountville Community Center.

Emerging female film director Saina Allen’s “The Rebound” is the unlikely, but true, account of the Miami Heat Wheels’ quest for victory and redemption during the year following a crushing defeat at the wheelchair basketball national championships. Allen and three of the players are expected to attend the 10 a.m. screening Thursday at Yountville Community Center.

Politics silenced Cuban voices beyond its shores, but within, music is its very heartbeat. For the first time, through over 40 concerts and unprecedented access to Cuba’s streets and people, documentary filmmaker Ron Chapman brings to life the full spectrum of Cuban music in “The Forbidden Shore.” It will be shown at 8:30 p.m. Friday at Napa’s Uptown Theatre and at 1 p.m. Saturday at Calistoga’s Gliderport. Eight of the film’s Cuban musicians will perform at the Calistoga Wine Pavilion following the showing.

The festival’s edgy Lounge films are being screened this year at both Copia in Napa and St. Helena’s Native Sons Hall. One of the highly recommended features is a psychological thriller, “The Drowning,” starring Josh Charles (best known for his role on “The Good Wife”) as a child psychologist haunted by his past. The film also stars Julia Stiles. It will be shown Friday at 4 p.m. at Copia in Napa and at 5:30 p.m. Saturday at Native Sons in St. Helena.

The festival continues through Sunday. For a complete list of festival films and information on passes and tickets, log onto www.nvff.org.

Hank Azaria, who voiced Apu on 'The Simpsons', apologizes for playing character

"I apologize for my part in creating that and participating in that," Azaria said. "Part of me feels like I need to go to every single Indian person in this country and personally apologize."

Review: Napa Valley College's "Chorus Line" is a triumph of talent plus technology

The COVID-19 live theater shutdown has inspired performers to learn new technical skills, as seen in the Napa Valley College production of "A Chorus Line."

'The Bachelor' star Colton Underwood comes out as gay

Will Smith film pulled from Georgia over voting law

Production of Will Smith's film "Emancipation" has been pulled from Georgia over the state's new voting law, the most high-profile film to depart.

Darlene Forbes, a wedding planner for three decades in Napa, had some downtime in 2020, so she wrote a novel. Then she wrote three more.

Jennifer Lopez and Alex Rodriguez told the "Today" show Thursday in a joint statement that they are calling off their two-year engagement.

Prince Philip vs. Philip of 'The Crown': Fact and fiction

How does the Netflix drama's portrayal of Prince Philip, who died at age 99 on Friday, compare with the man himself and the life he lived with Britain's Queen Elizabeth II?

The company that sold Lil Nas X's "Satan" shoe made from Nike Air Max 97s will buy it back from customers for a full refund after a settlement with Nike.

“Decanted” will receive its world premiere at 1 p.m. Friday at Napa’s Uptown Theatre as part of the 2016 Napa Valley Film Festival.