Become a Member
Read Today's E-edition
Share This
Wilfred's: Napa gets a Tiki bar
Share this
1 of 6 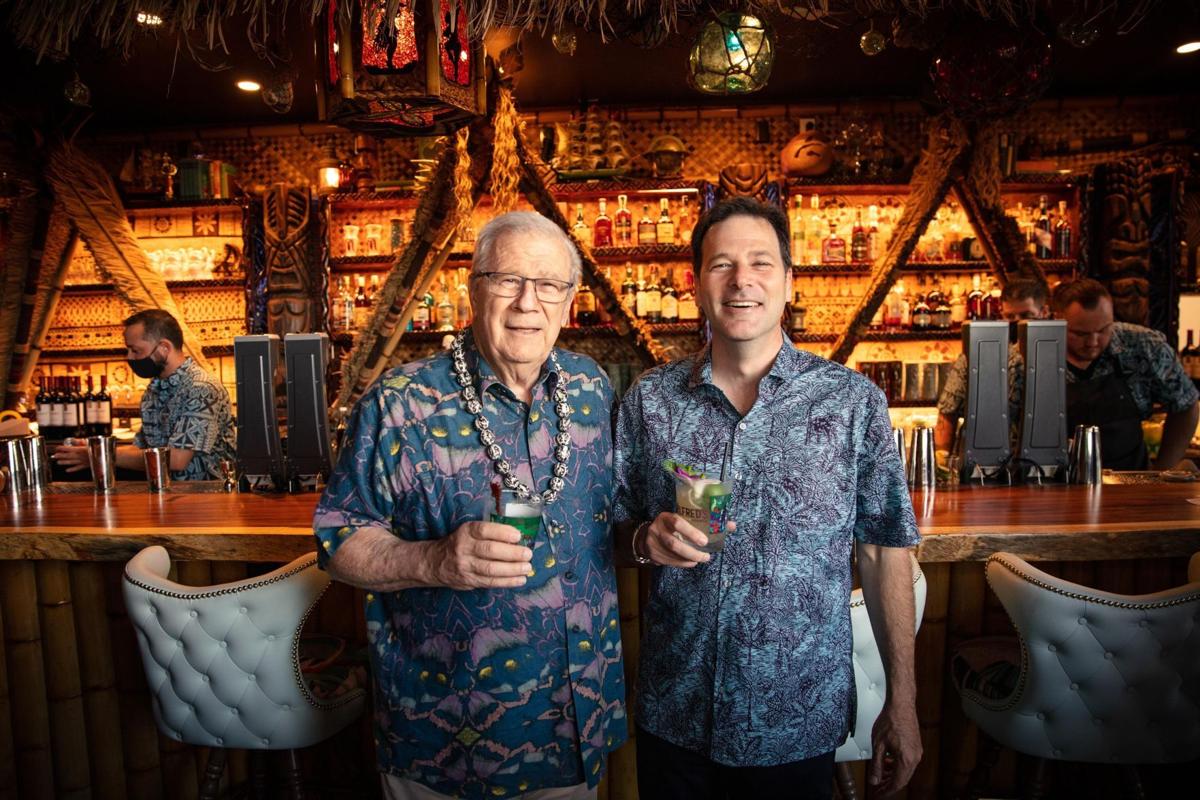 John and Nat Komes at Wilfred's Lounge, which opens Friday, Nov. 12, in Napa. 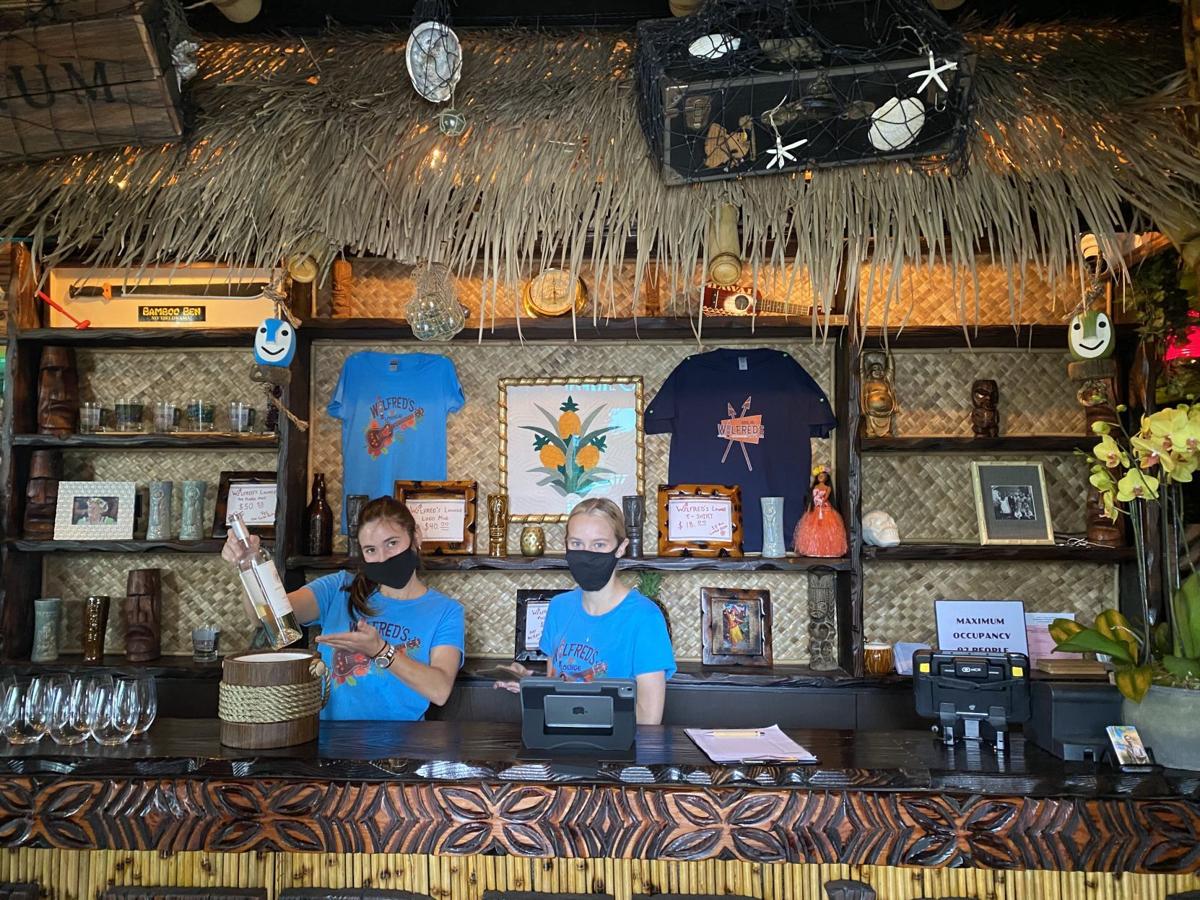 Hanging over the entrance to Wilfred's Lounge is the trunk that Flora Komes, the sister of the original Wilfred, brought with her from Hawaii to California in 1929. 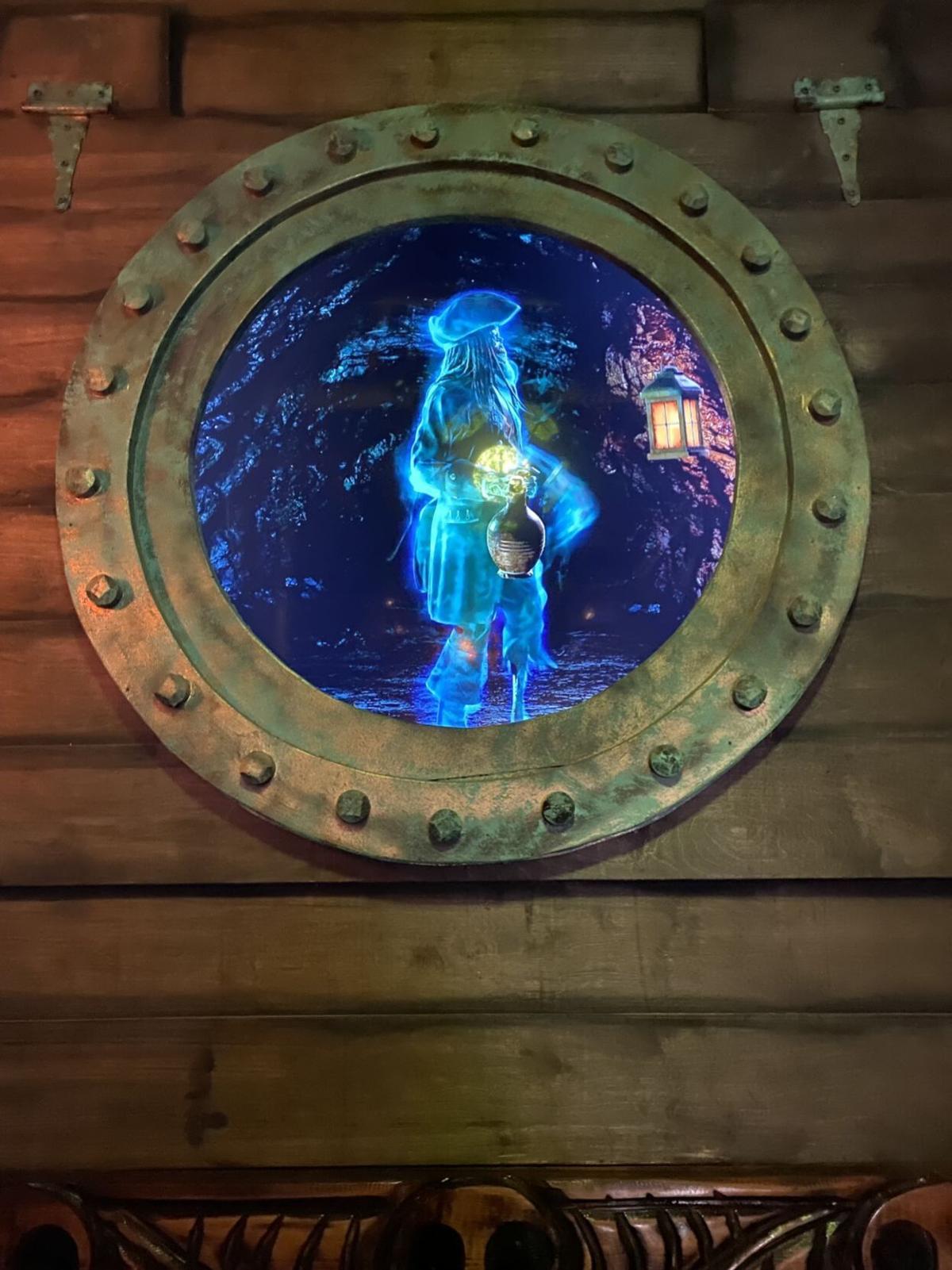 A pirate peers in through a window at Wilfred's Lounge. 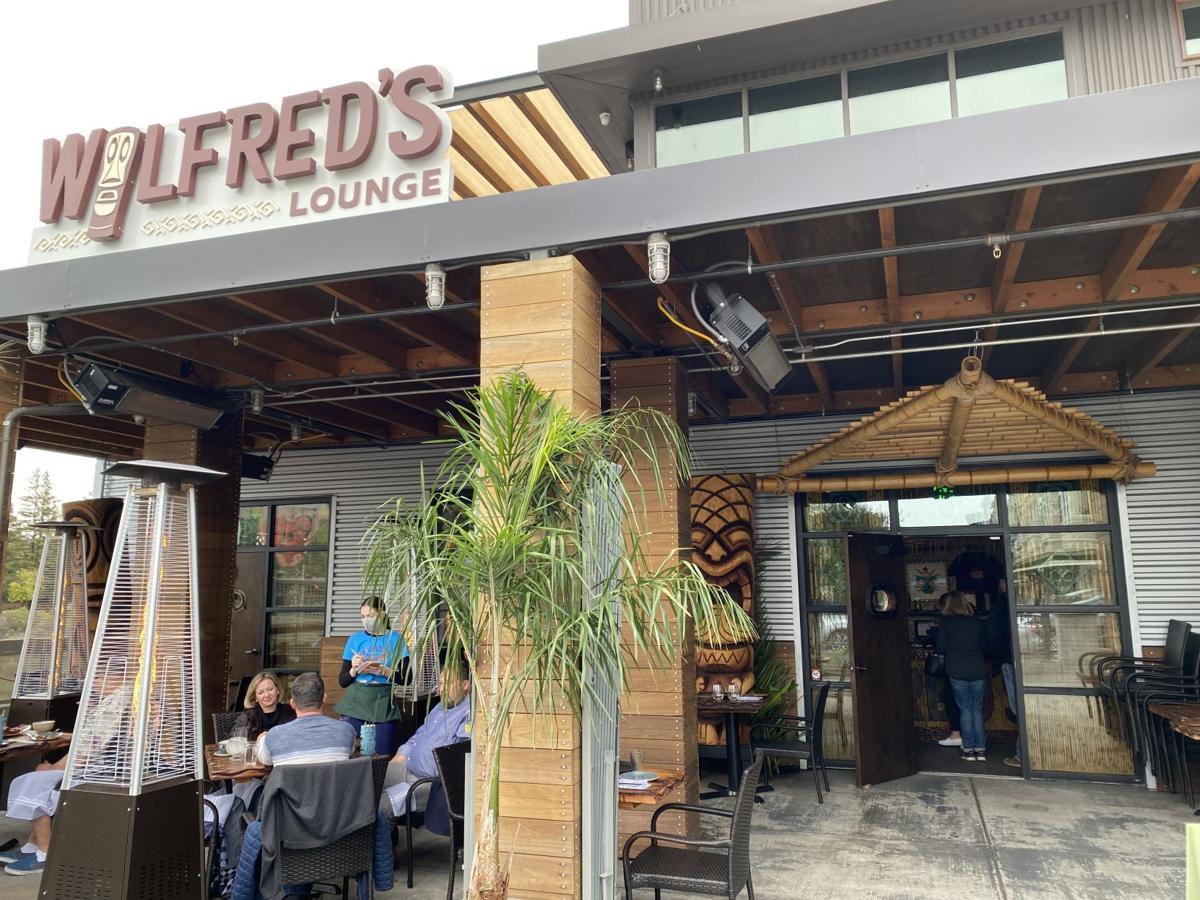 The exterior of Wilfred's Lounge on the Napa River. 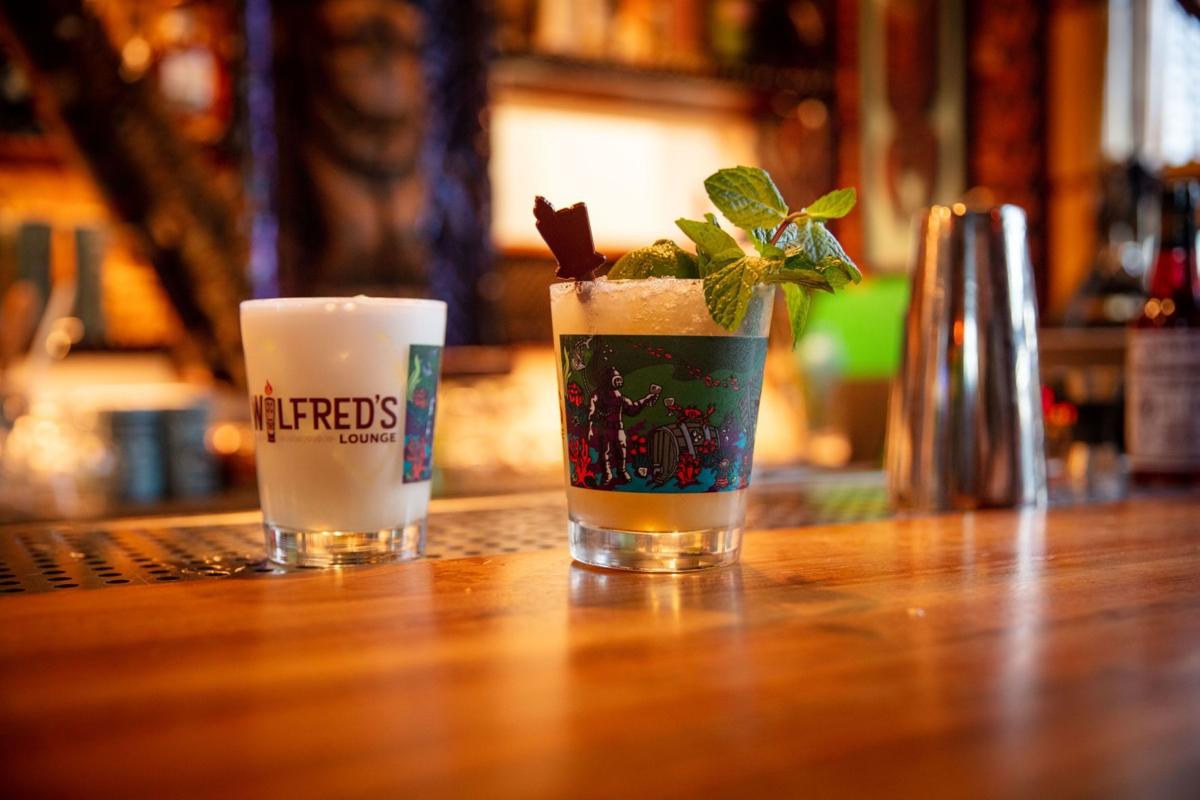 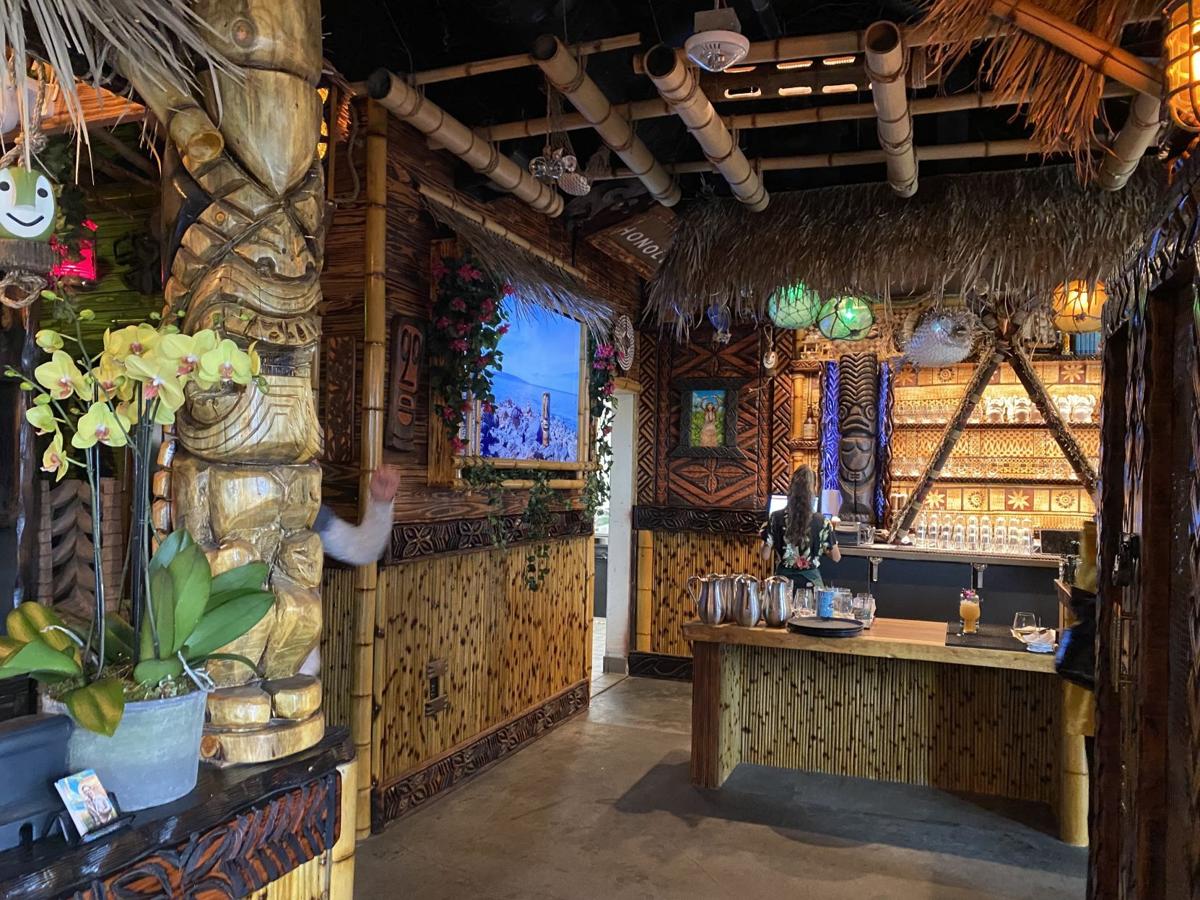 Artists and craftspeople who specialize in Tiki art helped to recreate a Polynesian feeling in the new Napa restaurant and bar.

Mermaids and Mai Tai, pirates and Tahitian punch: Napa is finally getting a tiki bar and restaurant.

If you are wondering who Wilfred is, that is all part of the story.

When the father and son duo of John and Nat Komes decided to buy what might have been the ugliest building to ever pop up in downtown Napa, there was a collective sigh of relief around town. Whatever they did, it would have to be better than the bizarre creation that resembled a washtub hit by a hurricane, created to house a short-lived hamburger joint.

Briefly, the Komes toyed with the idea of opening a wine tasting bar for their Flora Springs, John Nathaniel, and Bodacious wines. Then, Nat said, they heard loud and clear from the Napa community: please, something different.

"And we really did want something for the community," said Nat, who lives in Napa with his family. His parents, who founded Flora Springs Winery in 1978, divide their time between St. Helena and Arizona.

Flora Springs took shape in a pre-Prohibition ghost winery, but its name was inspired by John's mother, Flora, who left her native Hawaii in 1929 to study nursing in California.

Flora had a brother, named Wilfred, who long ago welcomed guests to his Honolulu bar.

As the idea of paying homage to their Hawaiian roots began to take shape, so did the pandemic, which did give the Komes time to develop the idea, detail by detail, transforming the ugly duckling building into a rare tropical bird on the Napa River.

As the word spread that it would become a Tiki bar and restaurant, local interest grew, especially from the thriving community of Tiki aficionados. Nat Komes said he was continually surprised and delighted as suggestions and tips -- such as where to find shrunken heads -- poured in.

Observers could watch the transformation, from the new siding that covered the old metal building to the two artists who carved the giant Tiki statues from fallen eucalyptus trees; they now stand on the patio at the entrance facing First Street.

Step inside and you are in a Polynesian wonderland everywhere you look:  a  bamboo-wrapped bar, palm fronds and flowers, and the mermaid and pirate who take turns appearing behind a window in a corridor.

The Komes worked with a team of artists and craftspeople who specialize in Tiki culture including Bamboo Ben Bassham, Michael Cobb and Billy Crud, as well as Bill Collins, Chris Lopes, Woody Miller, Jose Mendez and Ken Pleasant.

Downstairs, it's all Tiki, with an outrigger dangling from the ceiling, abundant carvings, a pufferfish light, and an ohana case where regulars can store their mugs. (It's already filling up.)

Ascend the staircase lined with a mysterious lava wall and embellished with giant statues from one of Trader Vic's classic Polynesian restaurants, and you are inside a ship with red velvet sofas and a skeleton behind a bar, a skull and crossbones on the wall -- could this be a pirate captain's quarters?

From here, you can step out onto the upper deck and gaze at the vista of, well, it's the Napa River, not the rolling Pacific, but it's still a grand sight.

Throughout Wilfred's, mingled with the Tiki carvings are Komes' family heirlooms. The trunk Flora Komes brought from Hawaii hangs over the bar; some of the chairs belonged to Nat's grandparents. Look carefully and you'll find a painting of Flora and another one of Wilfred from artist Steven Horlock.

Yet to come is an exterior mural, created by Ken Ruzic that combines Napa Valley and island images: Flora Komes is arriving from Hawaii on an outrigger canoe along with the Napa's old First Street bridge. Right now you can see the design for the mural on the cocktail glasses.

Wilfred's general manager is Daniel “Doc” Parks, a mixologist and 2017 San Francisco Chronicle “Bar Star. ” Parks was beverage director at the Pagan Idol and Zombie Village bars in San Francisco, and he also brings his Tiki experience from working at Trader Vic’s flagship restaurant in Emeryville.

Among the drinks on Parks' cocktail list is the 1944 Mai Tai invented by Trader Vic Bergeron in Oakland, as well as other creations such as Batten Down the Hatches (which includes absinthe as well as the Tiki staple, rum), a Wiki Wiki Spritz (with sparkling wine) and a Hipa Hipa Hooray made of rum coconut, pandan, pineapple, lime and orange, ad described as "not your everyday pain killer."

Daring souls who order the Waikiki Wipeout (for three to five people) will get a special surprise; one would not want to give it away, but it involves the Three Stooges.

Wilfred's executive chef is Max Ackerman, a native of San Diego, who found his way to Napa, where he first worked at Compline. Ackerman is also the owner of Sushi Monkey in Napa, which offers a creative range of sushi -- and he plans to bring the fun spirit he incorporates in his sushi to Wilfred's menu.

The menu, he said, is still evolving but in addition to island classics, like Coconut Shrimp with a ginger mango dipping sauce, Five-Spice Sticky Ribs, and Huli Huli Chicken Skewers. There will also be Spam Sliders.

"We have had fun," Nat Komes said. "My dad brought out a folder full of old recipes."

And will there be wine? Absolutely. John Komes also took charge of this area, Nat said. "It's just Napa Valley wines -- a 'died and gone to Heaven wine list.'"

"I’m proud how my dad and I transformed it into a place with layers of fun and surprise," Nat said.

“Wilfred’s Lounge will attract true ‘Tiki-philes’ as well as folks looking for a completely novel experience,” Doc Parks said. “From the cocktails to the food to the décor, we’re focused on creating an authentic island experience that offers people an escape and the warm hospitality the Komes family is already known for in Napa Valley.”

Plans are to include live music including performances by and Judd Finkelstein's Maikai Gents on Nov. 12 and the Alcatraz Islanders on Nov. 13.

More information is at wilfredslounge.com.

Jon Nathaniel and the Fabulist: A father and son's new winery in St. Helena

The flagship wine of the new John and Nat Komes' new Jon Nathaniel winery is The Fabulist, a tribute to John's legendary storytelling skills.

John and Nat Komes at Wilfred's Lounge, which opens Friday, Nov. 12, in Napa.

Hanging over the entrance to Wilfred's Lounge is the trunk that Flora Komes, the sister of the original Wilfred, brought with her from Hawaii to California in 1929.

A pirate peers in through a window at Wilfred's Lounge.

The exterior of Wilfred's Lounge on the Napa River.

Artists and craftspeople who specialize in Tiki art helped to recreate a Polynesian feeling in the new Napa restaurant and bar.