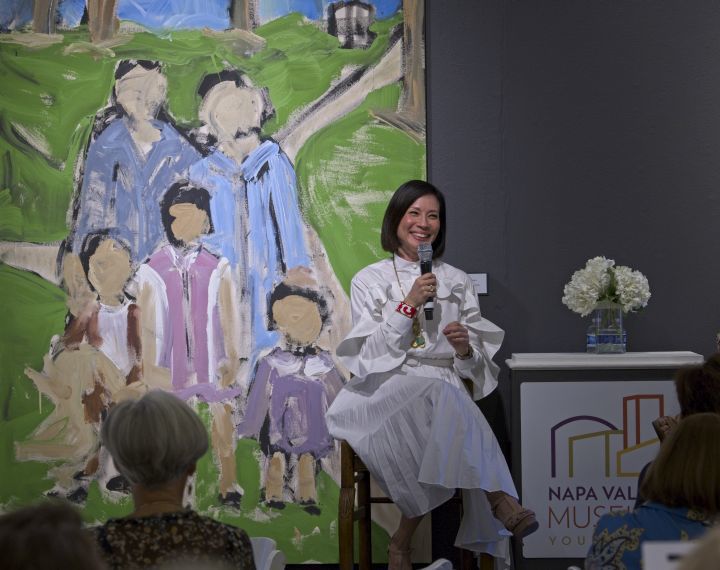 Lucy Liu was keynote speaker at the Phenomenal Women 2020 Luncheon, a benefit for the Napa Valley Museum Yountville. 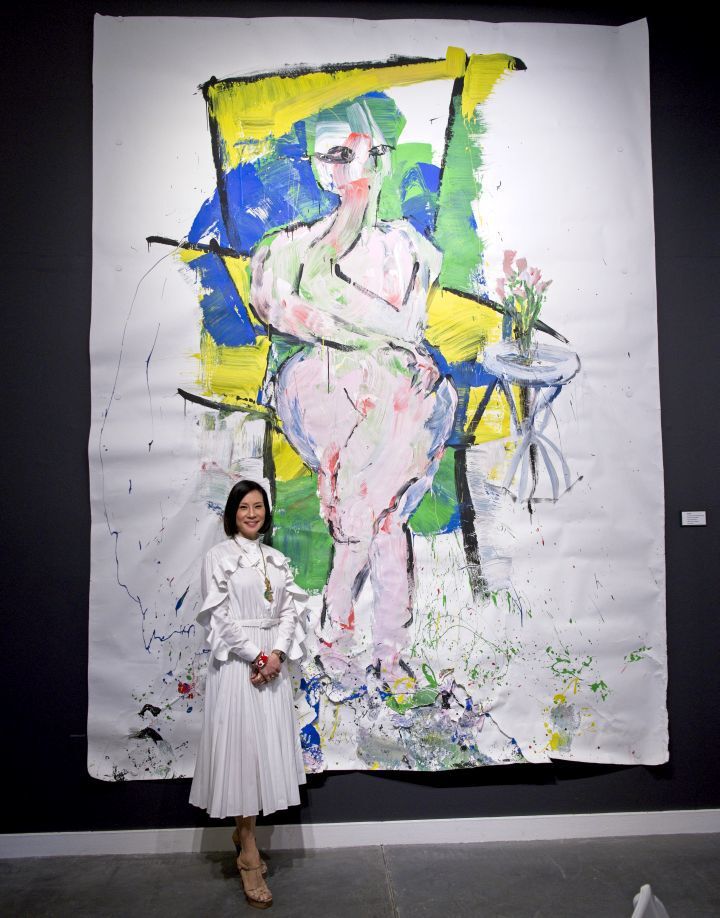 Artist and actress Lucy Liu stands in front of her painting “Hunger.” It's part of  "One of These Things is Not Like the Other," a show of her works at the Napa Valley Museum Yountville. It can be viewed online until the museum reopens.

The team at the Napa Valley Museum Yountville gets asked one question more than any other these days:

“How did you ever get Lucy Liu to bring her first U.S. museum exhibition to you here in the Napa Valley?”

The answer, it turns out, is simple: “We asked.”

“I began looking for someone who was an accomplished visual artist but who brought other aspects of life to her work, since I find that so many artists these days—and so many women—are involved in multiple creative endeavors. When I saw Lucy Liu’s art, as exhibited at the National Museum of Singapore, and considered it in the context of her accomplishments as an actor and director and work on behalf of children as an ambassador for UNICEF, I knew that I wanted our museum to present the first U.S. museum exhibition of her work.”

The result is: “Lucy Liu: One of these things is not like the others,” on exhibition at the Napa Valley Museum Yountville through April 26. It also brought Lucy Liu to Yountville last week, where she gave an inspiring keynote speech at the “Phenomenal Women” luncheon fundraiser, helping the museum raise more than $90,000 for the nonprofit. The Phenomenal Women event sold out quickly with a substantial waitlist of those wanting one of only 92 seats at tables tightly tucked inside the museum’s Main Gallery, surrounded by artwork of the TV and movie actress.

It helped that Liu, who has with millions of devoted social media followers (including a fan club of self-described “Liu-natics”), donated an original silkscreen valued at over $10,000 for auction at the luncheon, to benefit the Museum’s arts and education programs.

Speaking about her first U.S. museum exhibition, Liu said: “I’m so happy to collaborate with the Napa Valley Museum and to share my work with the community. Art has been an important part of my life and development since I was a child; it helps cultivate imagination and also fosters critical thinking skills. Supporting lifelong arts education is imperative and I am thrilled to be a part of this important endeavor.“

Liu’s visit to Yountville gave the museum team its first chance to meet Liu in person, and to discuss the inspiration behind her multi-faceted body of work. The exhibit was curated by Daniel Chen, director of Chambers Fine Art in New York, which represents Liu’s art, and who worked closely with Liu on the project.

Chen, an expert on modern Chinese art who helped curate Liu’s National Museum of Singapore exhibition, traveled from New York to Napa Valley to help the museum team with the installation and to attend the opening night on Feb. 1.

To put this work into larger context, the museum obtained an example of a traditional Japanese Shunga hand scroll from San Francisco’s Asian Art Museum, which it displays at the entrance to the Shunga section.

In her artist statement for the exhibition, Liu describes the genesis of the Shunga series: “My works tend to be intimate and personal; I often try to dissect things that were not explored when I was growing up. During my adolescence, I was constantly questioning things that were considered ‘taboo’ and was never satisfied with the answers I was given. Curiosity is key, and looking into the crevices of these questions and answers is something that I can express and explore through my art.”

There are examples of her silkscreens (including the auctioned work), plus pieces from Liu’s “Lost & Found” series, in which found objects are incorporated into handmade, hand-tooled books that are works of art in themselves.

“Another ongoing concern in my artwork has been the notion of security and salvation,” Lui said. “There are long-term effects that result from personal relationships, reflected in both our physical and emotional selves, and I have always used art to address these ‘effects’ and ideas. This theme is sometimes realized by the appropriation of discarded objects, which I place into handmade constructions, where the objects are protected and given a new significance.”

The exhibition also showcases Liu’s “Totem” series, in which intricate embroidered “spines” are paired with bold designs fashioned from fabric, paper and thread. The series includes “41”: individual small panels depicting each of the first 41 years of the artist’s life. Patterns and cutouts in the “Lost and Found” books are repeated in the “41” series on the wall behind them, while the spinal patterns of the Totem series adorn the spines of the “Lost and Found” books.

Large beige “Totem” works that seem flat from a distance reveal multi-dimensional and colorful connections upon closer inspection. The result is to be immersed in the world of an artist seeking intellectual order from emotional chaos.

“Although it’s only in retrospect that I discover the threads that tie my various bodies of work together, I find that no matter which medium I am working with, I often focus on the connections between people who pass through our lives,” Liu said. “Perhaps I am subconsciously seeking a closer examination of the meaning behind our personal relationships. Whether positive or negative, each interaction in our life leaves a mark on our psyche, and sometimes can manifest itself in a surprising, physical manner. These ‘marks’ manifest themselves in my work.”

In addition to the artwork, the museum offers video presentations illustrating Liu’s influences and creative processes, and a “living” title wall featuring audio and video of Liu in her studio. It shows Liu creating the giant painting: “Hunger,” which at nearly 12 feet tall takes up the entire back wall of the Main gallery.

The reaction to Liu’s work has been overwhelmingly positive, Rafaty said. “Visitors enjoy learning more about Lucy, who reveals so much about her interior life through her art. People seem to connect to the vulnerability on display, and to the work’s essential humanity.“

Due to the adult themes in the exhibition, the museum recommends that a parent accompany visitors younger than age 18. Other exhibitions currently on display include “The Yates Collection” of masterworks by Picasso, Pissarro, Chagall, Matisse and others, on long-term loan to the Museum from the Yates Foundation, and the museum’s permanent Napa Valley History Gallery, with a new Veterans Home history display.

The Napa Valley Museum Yountville is at 55 Presidents Circle in Yountville and is open Wednesdays through Sundays from 11 a.m. to 4 p.m.

Regular admission is $15; $10 seniors 65 and older, $5 Youth 6-17. Admission to the museum is free for Napa Valley Museum members, children 5 and under, residents of the Veterans Home in Yountville, and active duty military. Admission is free for Bank of America/Merrill Lynch cardholders during the weekend of March 8-9 through the Museum’s on Us program.

For more information about the exhibition, visit the museum’s website at napavalleymuseum.org.

HERstory: Women in the arts considered at Napa Valley Museum

“Does a woman have to be naked to get into the Met?”

Bardessono Hotel & Spa was named Business of the Year by the Yountville Chamber.

Are are people from the arts community filling their time when all the venues are closed?

The Napa Valley Museum, temporarily closed by COVID-19, has created an online gallery of student works in "Not From Around Here."

The Napa Valley Museum Yountville’s popular exhibition: “Lucy Liu: One of These Things Is Not Like The Others,” is now available as an online virtual tour.

Fifteen months of enforced emptiness at the Napa Valley Museum will end late next week.

Lucy Liu was keynote speaker at the Phenomenal Women 2020 Luncheon, a benefit for the Napa Valley Museum Yountville.

Artist and actress Lucy Liu stands in front of her painting “Hunger.” It's part of  "One of These Things is Not Like the Other," a show of her works at the Napa Valley Museum Yountville. It can be viewed online until the museum reopens.