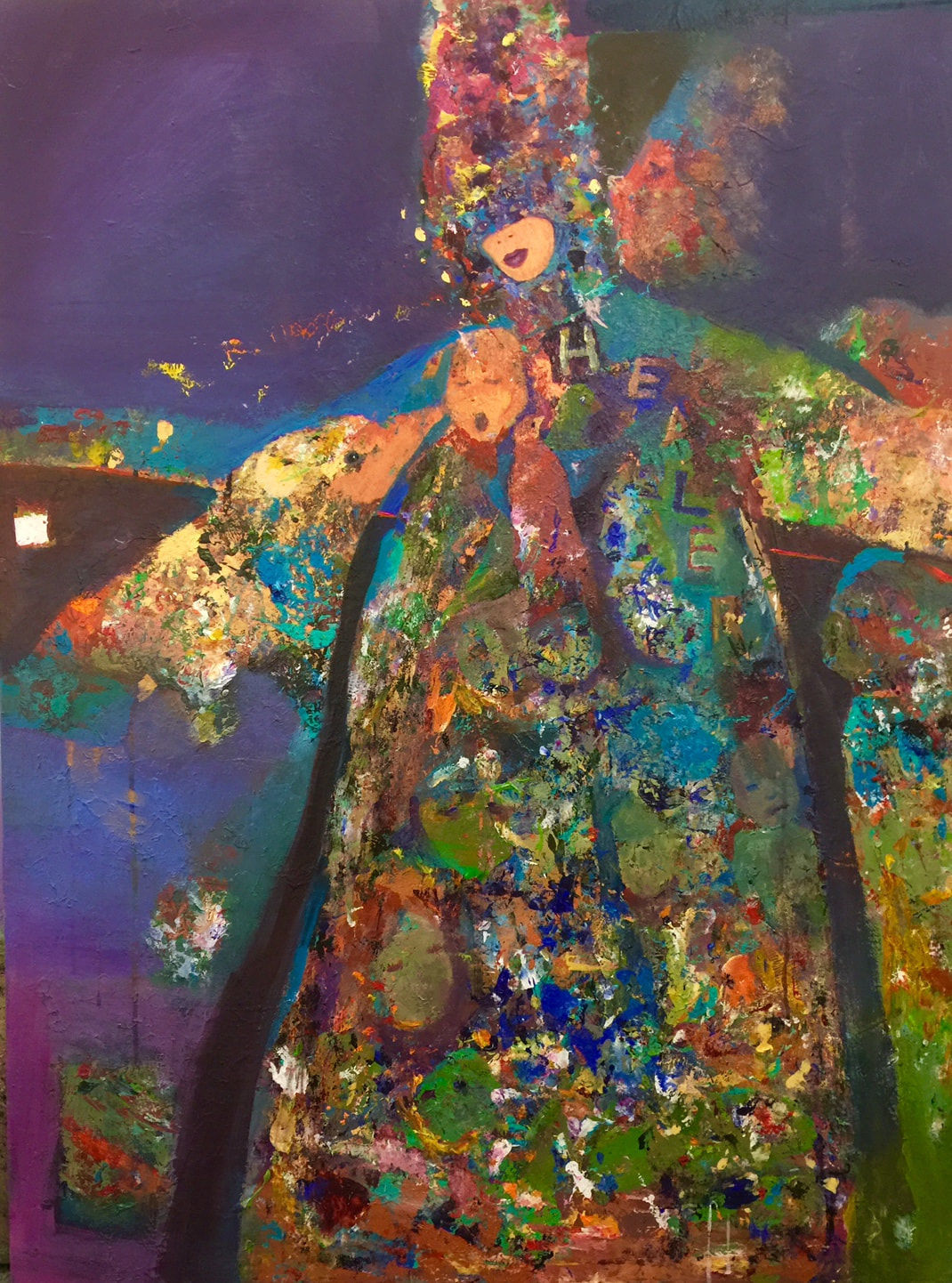 "The Healer," by Jessel Miller is one painting from her new series, "Soulful Voices." "It is dedicated to all those powerful brave souls who spend each day caring for others and putting their own lives at risk for all of us," the artist said. 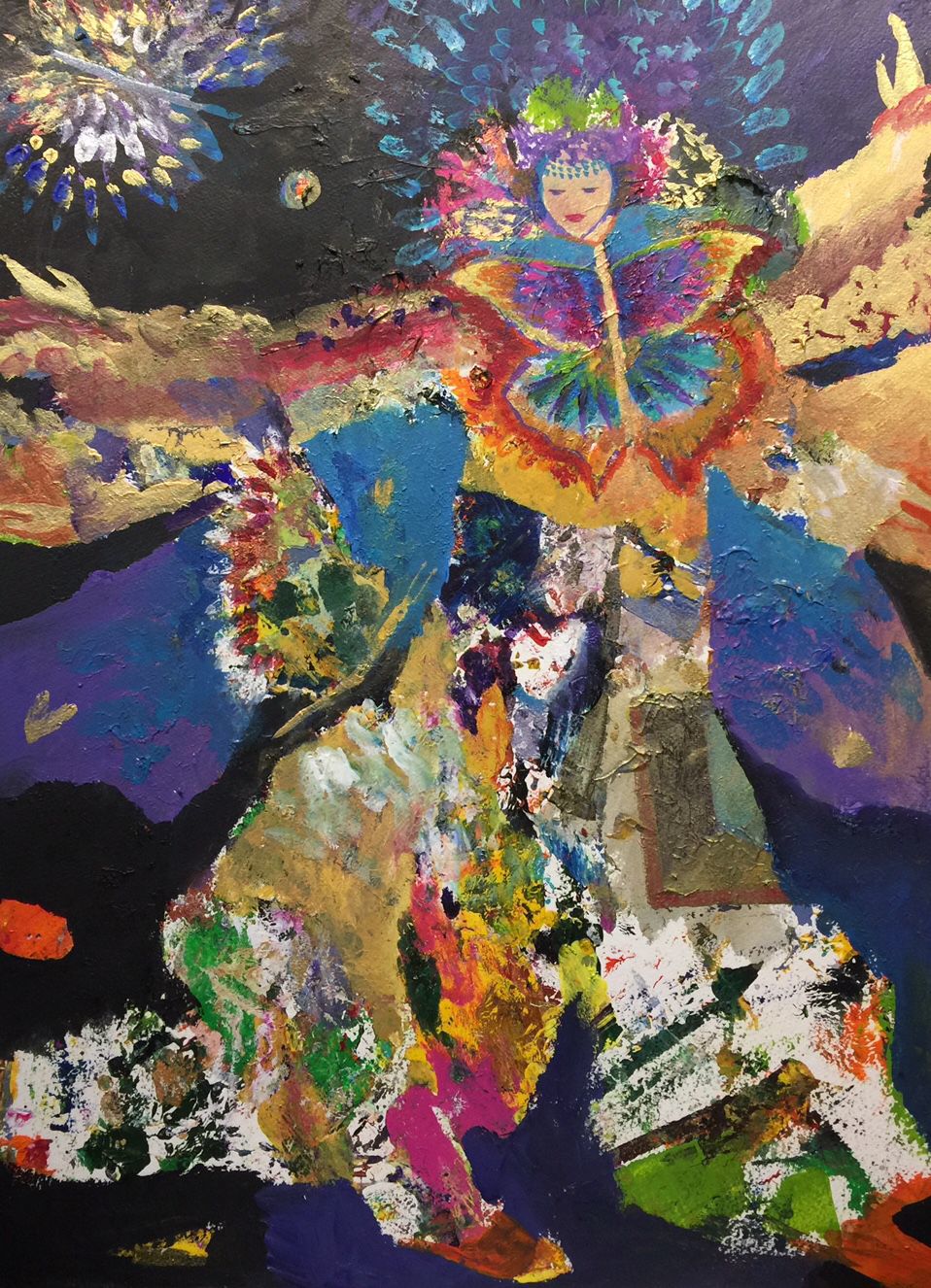 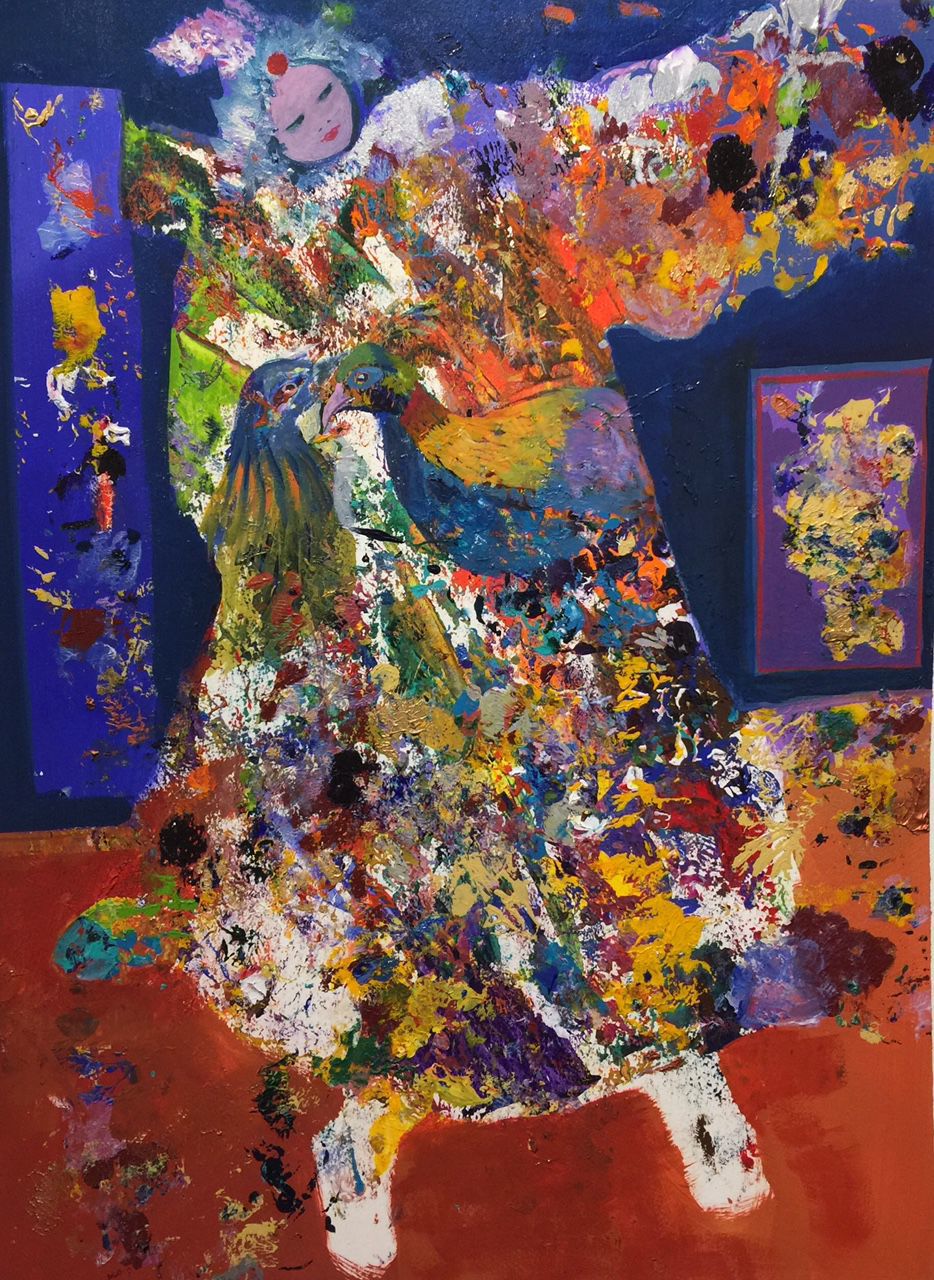 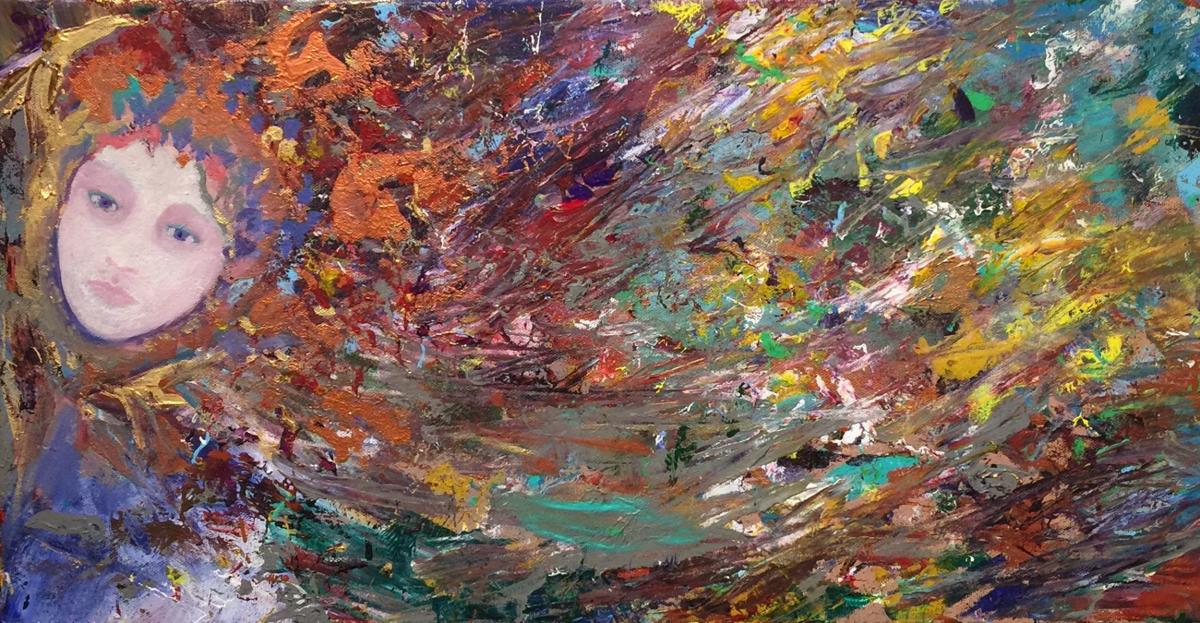 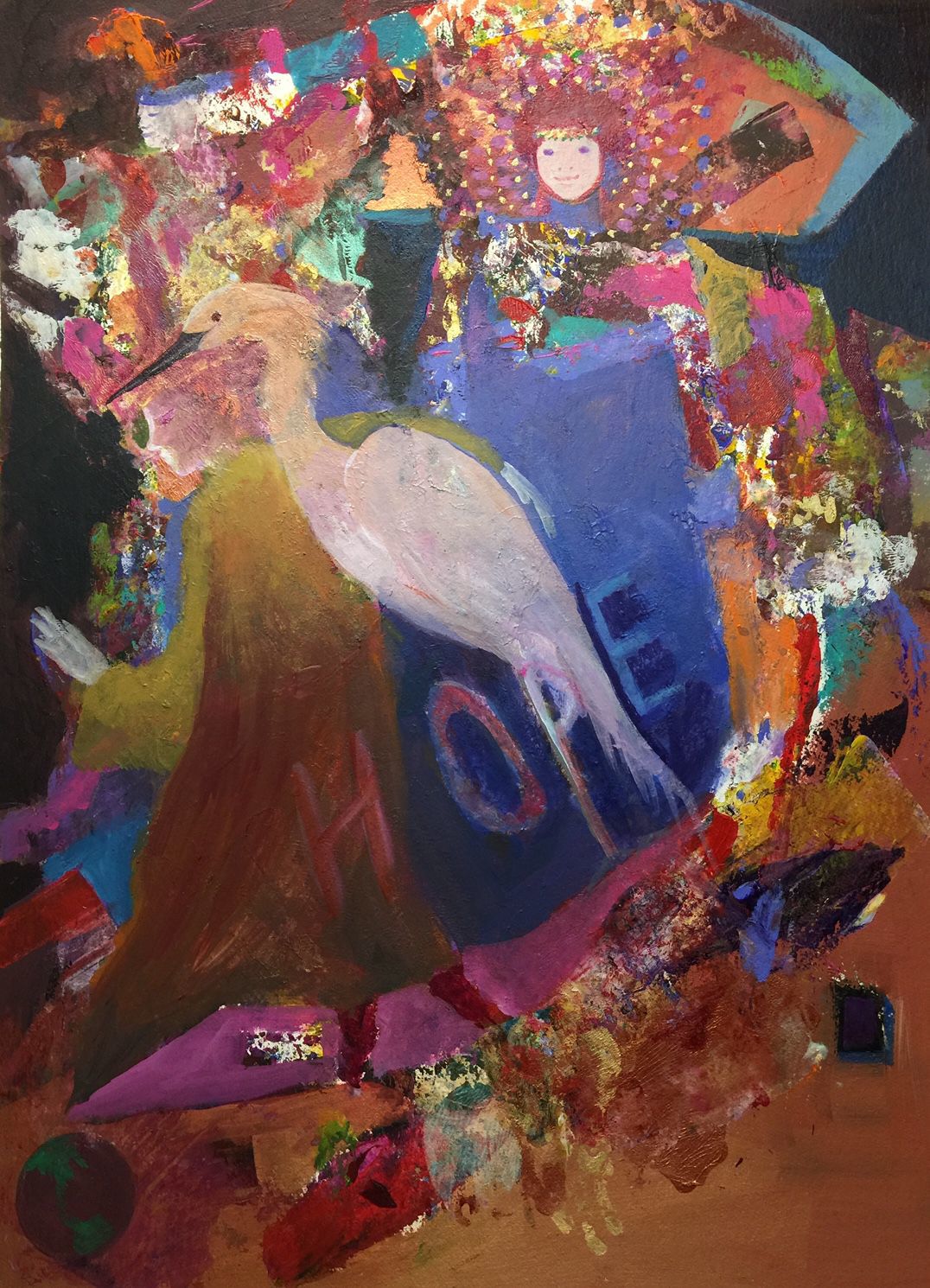 While the coronavirus pandemic is taking a toll on the arts and artists across the nation, for Napa artist Jessel Miller, the effect is a challenge that she describes as “an enormous overhaul, transformation, evolution and complete reinvention of my art.”

Miller opened her gallery 35 years ago in an rambling old stone winery on Atlas Peak Road in Napa. Over the years, she evolved in a dual role, both as an artist and a supporter of others, showing works local and international artists and local artisans, and hosting receptions for writers and musicians and teaching classes and making the gallery available for other artists to teach.

Mingled in the gallery, among Guy Buffet’s witty, culinary paintings, Daniel Mundy’s idyllic pastoral studies and Stuart Dunkel’s charming paintings of mice at work and play, one could find Miller’s works, too — romantic watercolors of vineyards, fields, rivers and mountains, all filled with a rainbow of colors.

“Jessel Miller,” said Napa author Lenore Hirsch, “is the heart of the valley.”

Today, however, the main gallery has undergone a metamorphosis. White tarps cover the floor, and four different painting stations display works in progress. A dizzying explosion of paintings cover the walls. More are stacked on tables and propped against each other on the floor.

The paintings are dark and wild, swirling patchworks of jewel tones, scattered with gold. From the storm of colors and shapes, forms emerge: an owl, a hawk, a wolf, a giraffe. Caught in them, too, are human faces. Some are recognizable: Michelle Obama, Kobe Bryant and his daughter Gianna, Greta Thunberg, John McCain. Other faces might have been drawn from a timeless well of archetypal images, angels, goddesses, and nearly formless windblown shapes.

Perhaps the most striking painting, resting on a massive easel beneath spotlights is titled “The Healer.”

They are all Miller’s works, and they are unlike anything she has ever created before in her long career as an artist. Miller is painting daily,moving from one station to another, turning out work after work. She says it is “as if a door has opened — or maybe it’s doors and windows all at once” to capture in one dizzying whirlwind of creativity, the spirit of our times, and find inside it, hope.

“When my family abruptly moved from deep in the woods of northern Ontario to Miami, Florida in 1965 I had no outlet for my very creative soul,” Miller writes in the blog she is posting to chronicle her work.

Growing up in Canada,” she said, “music, art and movement were my greatest daily joy. Landing in Florida, my heart and art turned inward and I began drawing for hours in my room. Faces began to appear on my pages and words and music flew out of my hand. It was the worst of times because of the drastic change in climate, culture and lack of friendships, yet it was also the beginning of my focus towards a creative life, which to this day is what I do every single day.”

When she moved to Napa as a young artist, she left behind her early work in portraits and began painting light-hearted, joyful studies, inspired by the valley that became her home. She became the artist for the now-defunct Mustard Festival and published a series of colorful books “for children of all ages.” Illustrated with her merry art, her Mustards stories, as well as “Angels in the Vineyards,” and “The Calico Cat” advocated the good, simple life on the land.

The metamorphosis in Miller’s works, both style and content, began last fall when she decided to try using acrylics, instead of her usual watercolors. The new medium led her to experiment with abstract paintings “a whole new world.”

In November, she began preparing for the gallery’s annual holiday show and that brings together artisans and artists from Napa Valley. “It is always filled bright and full of energy and light,” Miller said. “While setting up the Christmas show, I noticed a couple of blank spaces on the wall. I popped out two abstract pieces, put frames on them — and voila! — a door to a new exciting road opened and I raced through it.”

She began painting more abstracts experimentally on paper. When she turned to painting on canvas, much to her astonishment, a figure appeared in one of her works.

“At first, I thought the woman was holding a child, and the child’s head was the round, greenish-gold ball. When I stepped back, I realized the child was holding the world up in its hands.”

She added, “That painting was the first time in years I let the messages take over, and I allowed the paint and canvas to guide me. I let them speak.”

“When this transformation took complete hold of me, I would get up and race down to the gallery at all hours, from 1 a.m. to 4 a.m., and start painting. Instead of fighting the forces, I gave in to them and honored and trusted that this was really important work.”

Miller said, “I realized I had a job to do and a new book to write. After publishing six books I thought I was done with books. Imagine my internal shock when I realized there was more to be said and I was being given the task.”

As more forms emerged in her work, shapes of animals and sometimes letters, she decided to call her new work “Soulful Voices.” She began writing text to accompany the paintings, capturing voices she felt were calling for help in averting the impending climate catastrophe: whales, elephants, giraffes, and monkeys, as well as human children and mysterious spirits.

Throughout January, absorbed in her work, she said, “I made a conscious decision that I could no longer watch the negative news and all that ripping and tearing of common kindness ... I cleared my life and turned off all ‘bad news.”

But then a friend came to visit on Jan. 26, and “mentioned that Kobe Bryant and his daughter, plus several other people, had died in a tragic helicopter accident. I didn’t really know who Kobe Bryant was.”

Nonetheless, that night, she got up to paint the faces of the father and daughter. “What struck me and is driving me to this day is that life is so fragile. The instant death of these precious souls reconfirmed my commitment to getting this book out as a quickly as possible.”

Tuning back into the news of the pandemic overtaking the world gave her a new energy and more faces for her paintings. In one of her paintings, letters emerged, spelling out, “hope.”

“Every day, images are appearing and I simply get out of the way and let them come through,” she said. “Every night I ask the universe, ‘What is the message I need to paint?’

“One night, the words ‘moon man and nightingale’ came through loud and clear. The nightingale has a long history with symbolic associations ranging from creativity, the muse, nature’s purity, and, in Western spiritual tradition, virtue and goodness. The nightingale became a voice of nature. I looked online for images of this bird and suddenly it hit me. This was not just about a bird, it was about Florence Nightingale, who devoted her life to helping the sick.” Nightingale became another face in a painting.

As for “The Healer,” she said, “(it) came in a completely different body when I first painted her, and I let her take time to reveal herself over a month’s time. This is the process we are all dealing with and I believe if we are vigilant and also protect our minds from too much negative news, we will weather this storm together.

She added, “This image is dedicated to all those powerful brave souls who spend each day caring for others and putting their own lives at risk for all of us.”

“I am listening to the doctors and scientists, while spending this time finding creative ways to express my thoughts,” Miller said. “We will rise to the challenge. For the first time in 35 years, I have nothing to do but paint. I think this is what is happening to a lot of creators. I have a lifetime of images inside me. I am flying.”

Visitors to the gallery, before the shelter-in-place directive took effect, began asking to buy her new paintings, and Miller has agreed to sell some, both originals and giclee prints, with the condition that she keep the originals for now, until the coronavirus crisis has passed, and she can again host a show in her gallery.

And the paintings will all appear in “Soulful Voices,” which Miller calls, “the culmination of 70 years of flowering formations and wisdom gleamed and gathered in my life adventure.”

For more on her work, to follow her blog, or to purchase paintings or prints, visit jesselgallery.com.

Invitation to a Winter Wonderland in Napa: Jessel Gallery opens its annual arts and crafts boutique

The Jessel Gallery in Napa continues its holiday tradition of bringing in artists and craftspeople from around the valley to showcase their creations.

This month, artists at Jessel Gallery are paying tribute to Signorelllo Estate, a winery that burned to the ground two years ago.

'Bright, Bold and Beautiful' at the Jessel Gallery: Four artists (and one writer) in July's new Napa Valley show

The colors of the “Bright, Bold and Beautiful” show, running July-August, at Jessel Gallery reflect the “brilliant” light of summer in Napa Va…

Artists are coming together globally for extraordinary performances.

The World in a Glass: Boisset and the art of blending

When he bought St. Helena's Raymond Vineyards, Jean-Charles Boisset admitted cheerfully, "I had no idea how to make Cabernet Sauvignon."

"The Healer," by Jessel Miller is one painting from her new series, "Soulful Voices." "It is dedicated to all those powerful brave souls who spend each day caring for others and putting their own lives at risk for all of us," the artist said.