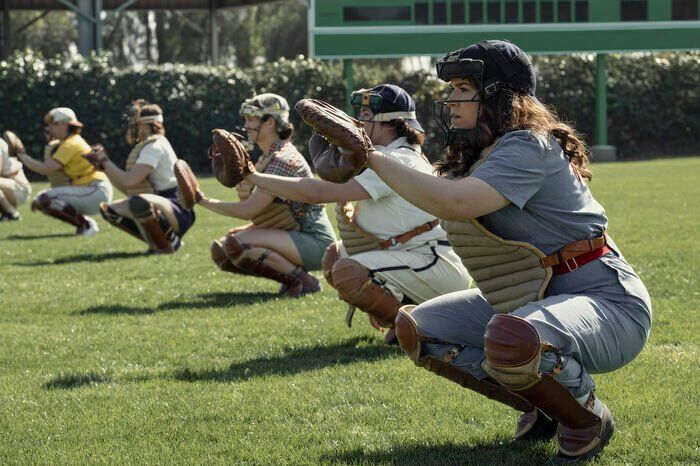 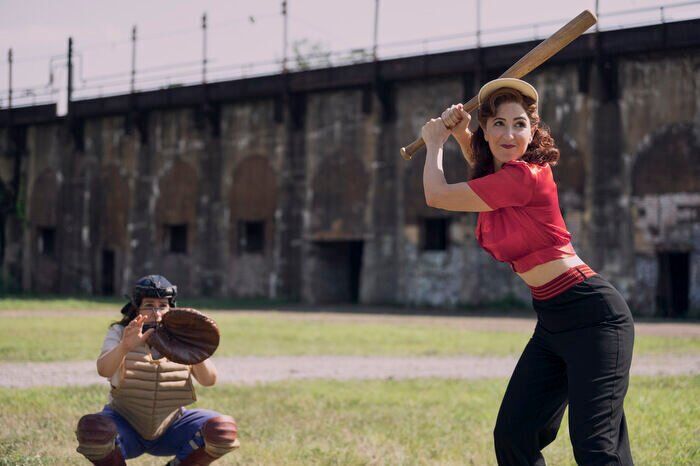 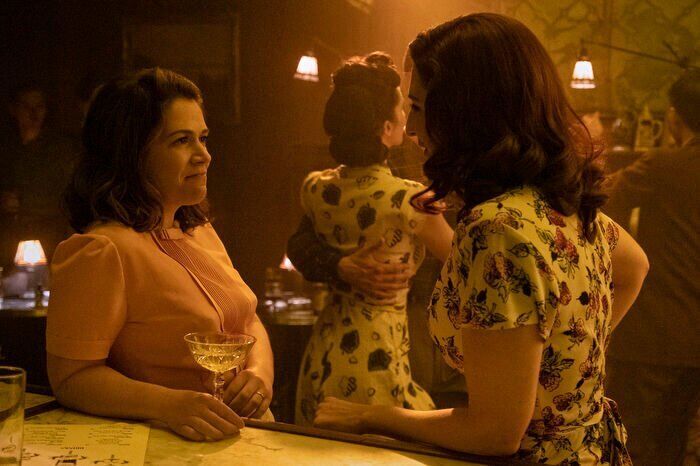 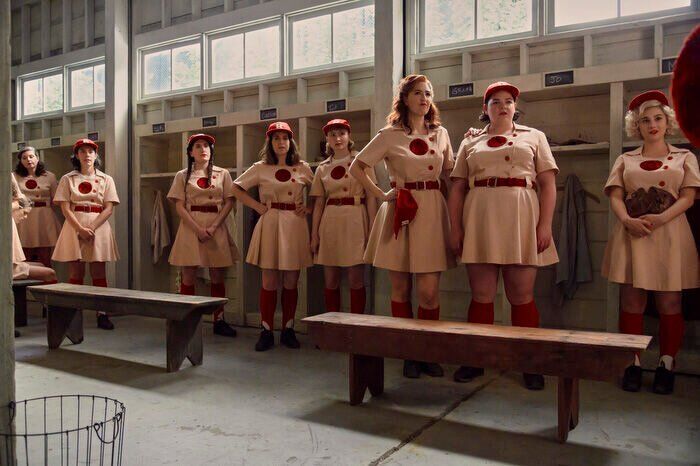 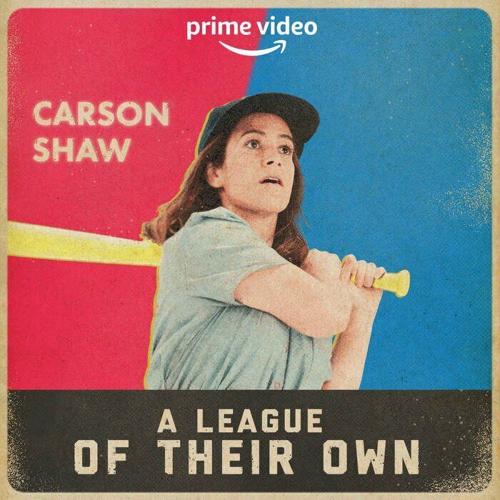 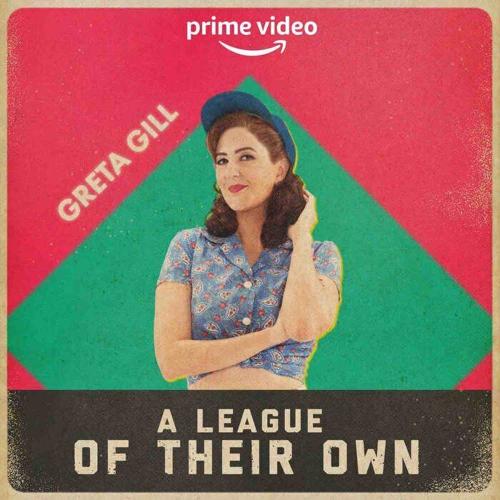 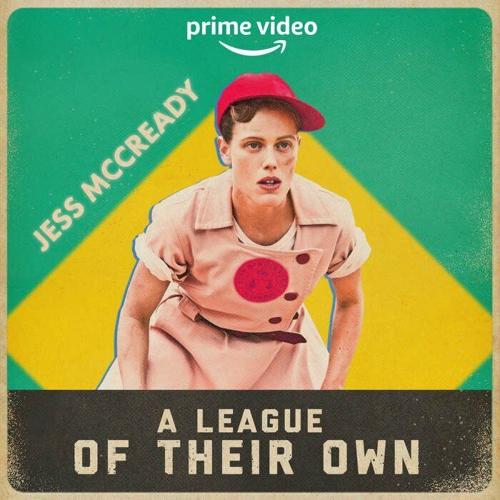 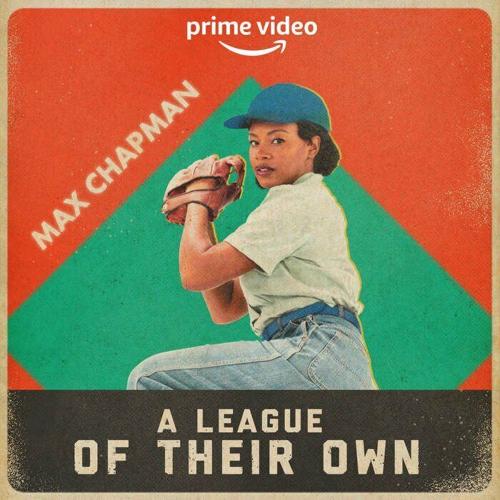 Underneath, there were stories about the players’ personal lives and the challenges they faced in a less-than-friendly sports world. Working off that 1940s history, creators Abbi Jacobson and Will Graham found material that could fill multiple seasons of television.

One scene in Penny Marshall’s 1992 film, for example, prompted a secondary plot in their new Amazon Studios series. A foul ball is picked up by a Black player and tossed back to Geena Davis.

“That’s supposed to let the audience know that she’s good, but she can’t be on the benches,” says Jacobson, who also stars as one of the players. “We wanted to show the All-American Girls (Professional Baseball League teams) were an incredible opportunity for white women and white paths, but they did not allow Black women to even try out.”

In a parallel story, the new series shows how a Black athlete like Max (played by Chante Adams) has to find a different route to success. “Their journeys are really important to tell side by side,” Jacobson says.

And, because her character works in a factory, Adams also got training in welding. “I had my Rosie the Riveter moment,” Adams says. Like the other actors, she was sent to boot camp to make sure her baseball skills were camera-ready.

“We trained for a month before we shot the pilot and then another month before we started the series,” says Kelly McCormack, who plays Jess. “By the end of it, we were more like baseball players than actors.”

Other stories to tell

Executive Producers Will Graham and Desta Tedros Reff say talking with actual players from the era revealed just how determined they were to play the game. “It’s been life-changing,” says Graham. “It taught us we should be less cautious and less careful about going for the things that we want.”

The new series also looks into the women’s personal lives and touches on LGBTQ themes.

“So often when you tell stories about that, whether (they’re stories about) women or queer stories or people of color, they’re always rooted in trauma and pain,” adds Reff. “That’s not to say that that doesn’t exist. But there was a joy (here) about their lives and their experiences and chasing their dreams. We really wanted that to translate to the show.”

Sexuality isn't the point of "League," Graham says. "It's that that they want to play baseball and they have to overcome obstacles on the road to doing that. We're just getting an opportunity to tell their story authentically."

Those off-the-field moments gave the actors a chance to show what other interests the women had. “It was so cool to see all the different layers,” says D’Arcy Carden, who plays Greta.

When Saidah Arrika Ekulona, who plays Max's mother, saw the baseball scenes, she realized just how amazing the series was. "As an actor, you have this myopic view of your storyline and the things you're a part of," she says. "And then you watch the whole story and realize how unbelievable the series is."

Early into the training process, the actors found themselves bonding, more so than they would on another film or series. “We became a team,” Carden explains.

Adds Melanie Mayfield, who plays Jo: “We were friends when we started filming, which almost never happens. And we got to play characters who were really three-dimensional.”

When they hit the field, the actors looked like players. “We’re kind of pinching ourselves because we wanted to tell the story authentically. We might only get to do this once and we couldn’t leave anything on the table,” says Graham. “It was a challenge, but also an enormous privilege.”

McCormack says there was little down-time for those playing Rockford Peaches. "If we weren't at bat, we were all running around in the background. So we were actors in the show, but also we were sweaty extras."

That depth, McCormack adds, "made the whole ensemble feel like each one of us was very much an important part of the show."

Changes are coming to the 'All Creatures Great and Small' dynamic

Now in his third season of “All Creatures Great and Small,” actor Nicholas Ralph says he’s more confident about his work, just like the man he plays, James Herriot.

The 50 best reality TV shows ever, according to IMDb

Using data from IMDb, here's a look at the 50 highest-rated reality TV shows of all time.

What's ahead for 'All Creatures Great and Small'? We've got answers

Now in his third season of “All Creatures Great and Small,” actor Nicholas Ralph says he’s more confident about his work, just like the man he plays, James Herriot.

REVIEW: It's a new game for 'League of Their Own'

Television’s “A League of Their Own” starts a bit like the 1992 film about the world of women’s professional baseball. Then, it throws a curve ball.

Worth Watching: Megan Thee Stallion Co-Hosts ‘Tonight,’ ‘Alone’ Gets Frozen, Baseball in the Field of Dreams

From a guest shot on "P-Valley" to co-hosting "The Tonight Show," rap queen Megan Thee Stallion is having a busy summer. The CW imports the teen dramedy "Bump," about an overachieving high-schooler who unexpectedly gives birth.

Martha Plimpton heard her old boss Greg Garcia was looking for a “Martha Plimpton type” for his new comedy and, frankly, was upset she wasn’t called.

A tense finale of the space-race drama "For All Mankind" leads a busy Friday for Apple TV+, including the season finale of the Maya Rudolph comedy "Loot" and the Hurricane Katrina docudrama "Five Days at Memorial."

REVIEW: 'The Bear' may be the one show you need to see

Like an ‘80s drama on NBC, “The Bear” makes everything count. The cast – filled with many flavors – makes it immensely relatable. It is, for lack of a better comparison, the one show Steven Bochco might have wished he had created.

When “13” premiered on Broadway, it boasted a cast of 13-year-olds. No adults. Even the band was populated by teenagers.