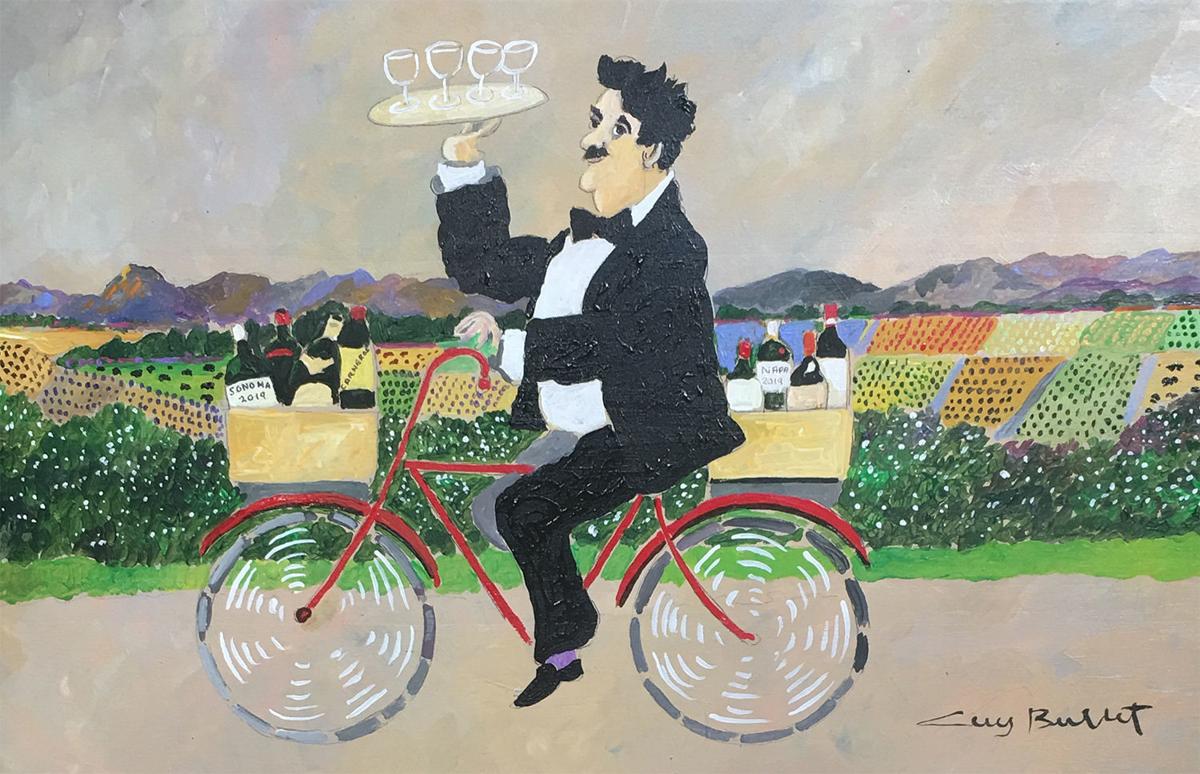 Guy Buffet’s sense of humor and artistic talent highlight his wine box art on exhibit at Jessel Gallery this month. 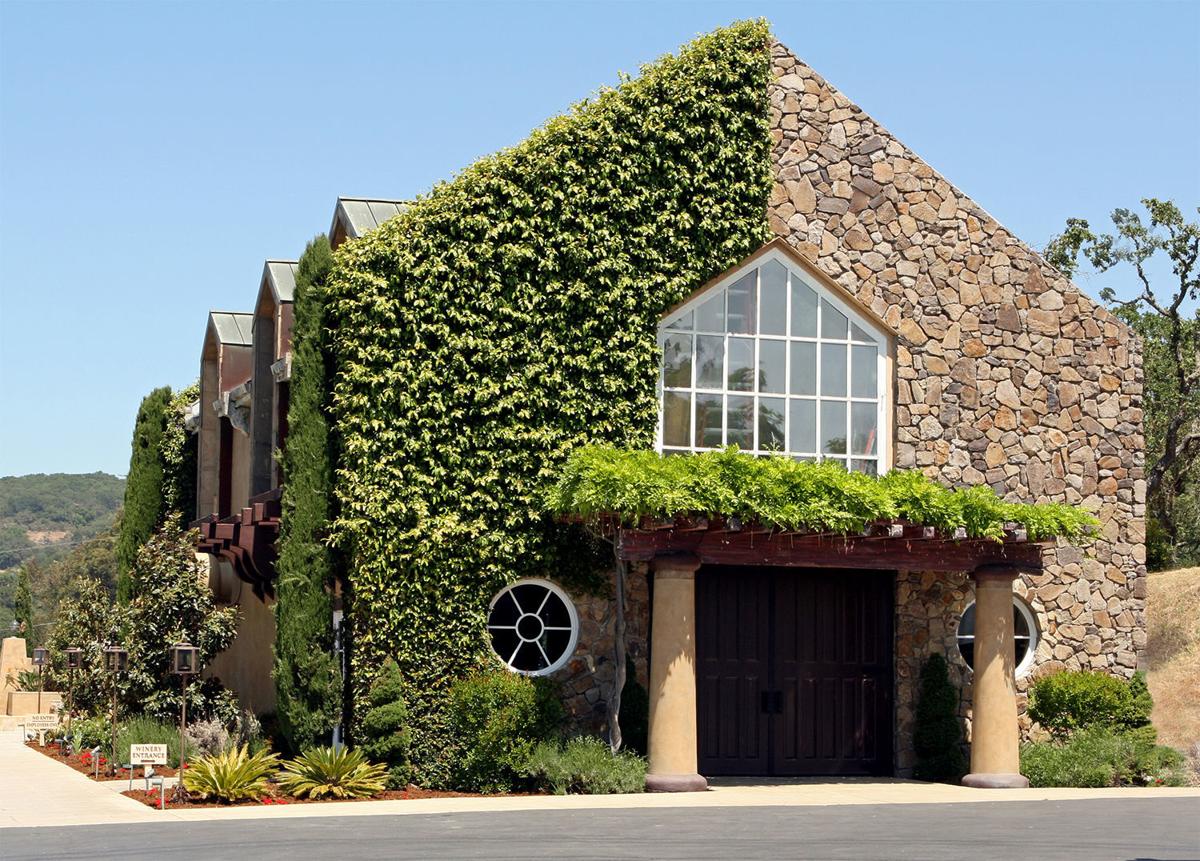 Signorello Estate, a majestic winery perched on a Napa hill, as it appeared before the 2017 wildfires, is being honored at Jessel Gallery this month. 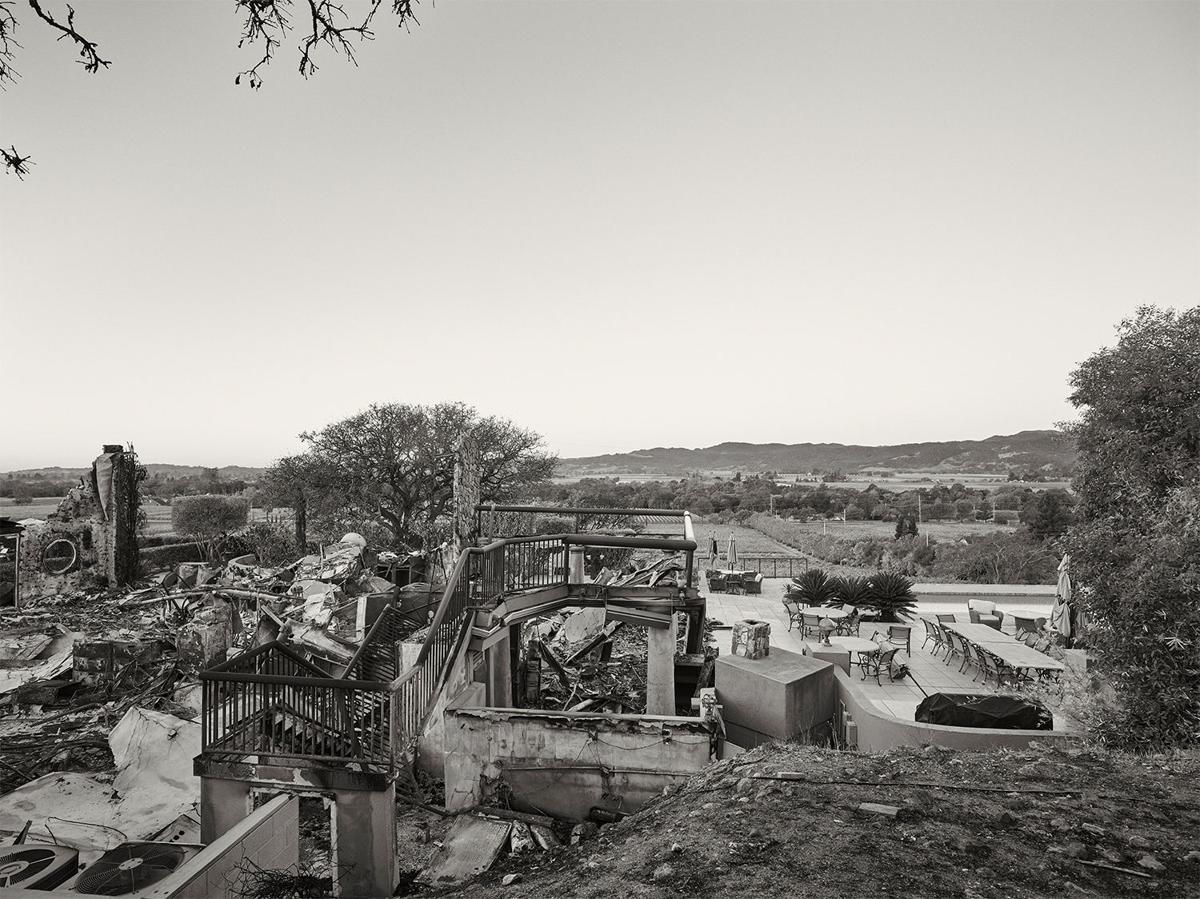 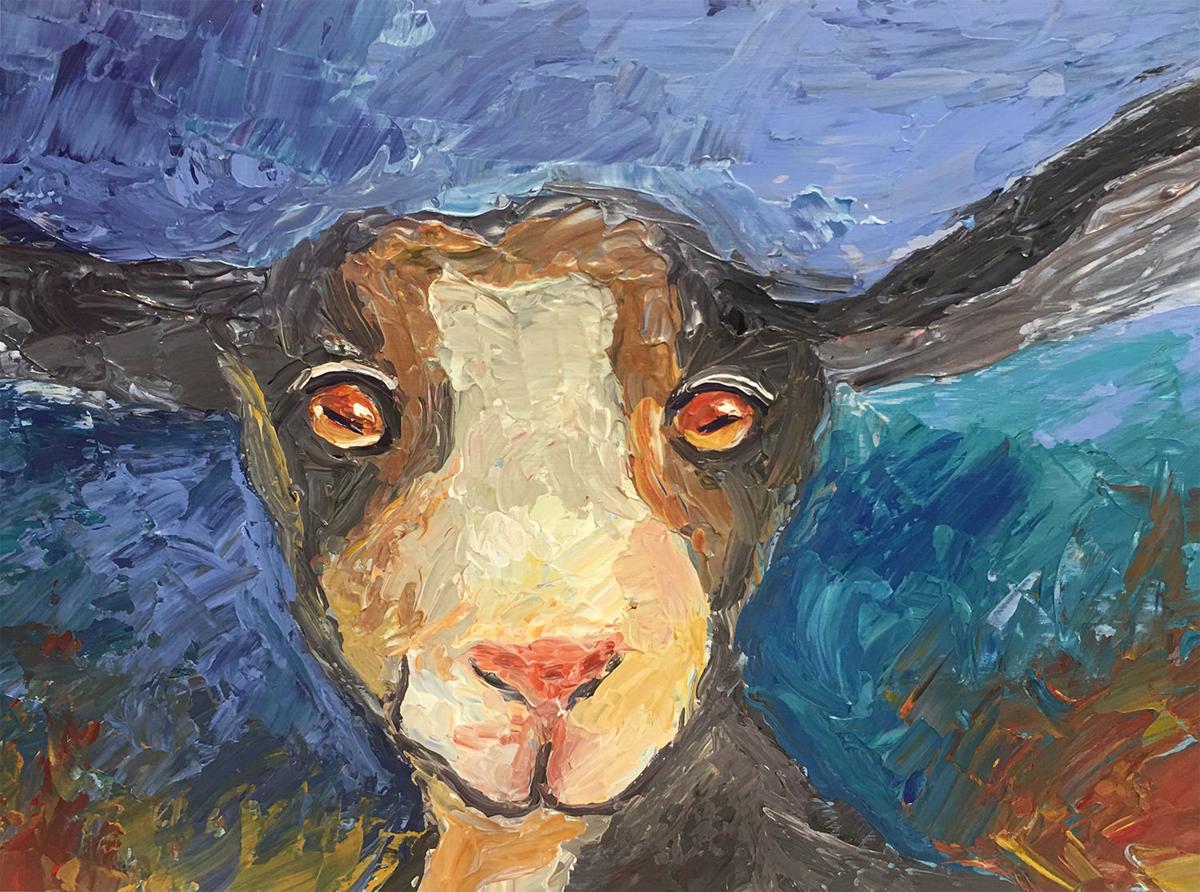 Jessel Miller’s humorous “Float Your Goat,” was done with a palette knife. 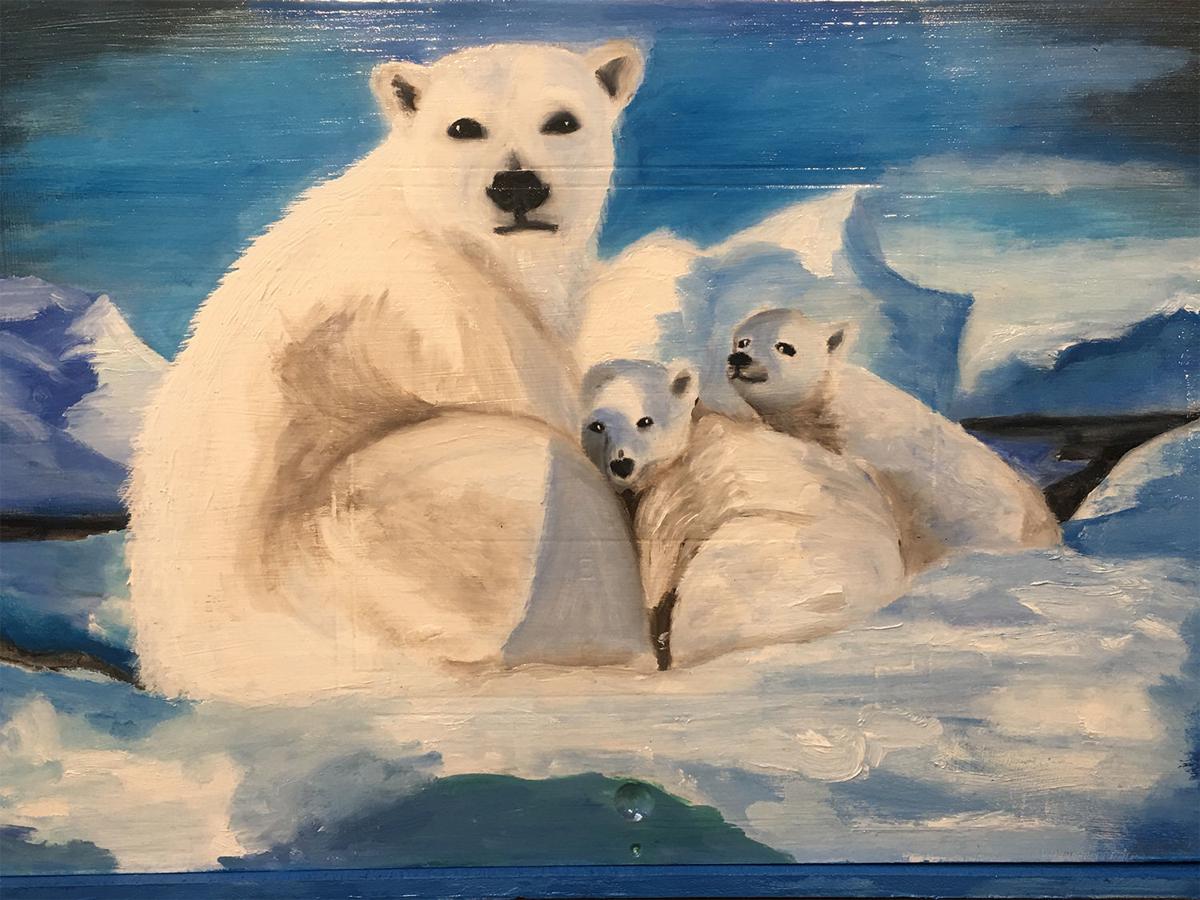 The polar bears in Sally Sparling’s “Living on the Edge” draw attention to beauty and climate through animals that have no voice to tell us about the impact of climate on their children and families. 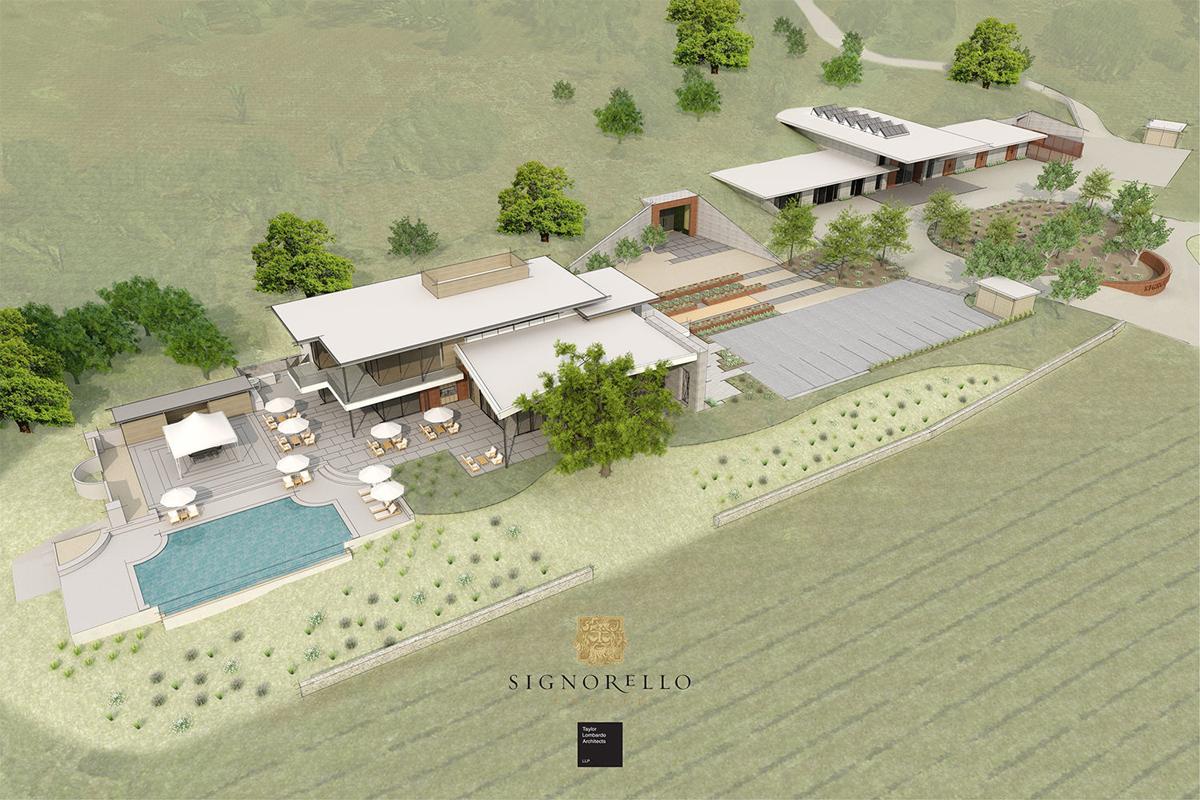 Guy Buffet’s sense of humor and artistic talent highlight his wine box art on exhibit at Jessel Gallery this month.

Signorello Estate, a majestic winery perched on a Napa hill, as it appeared before the 2017 wildfires, is being honored at Jessel Gallery this month.

Jessel Miller’s humorous “Float Your Goat,” was done with a palette knife.

The polar bears in Sally Sparling’s “Living on the Edge” draw attention to beauty and climate through animals that have no voice to tell us about the impact of climate on their children and families.

This month, artists at Jessel Gallery are paying tribute to Signorelllo Estate, a winery that burned to the ground two years ago.

The winery, which is just a few miles from the gallery became “the face” of the October 2017 Atlas Peak fire as images of flames leaping from it circulated around the world.

“I am so excited about this show. It is a collection of amazingly creative artwork on wine boxes donated by Signorello Vineyards,” said gallery owner Jessel Miller. “We are honoring this wonderful winery that was destroyed in the fire. Like a phoenix, it is rising again and exemplifying the resilience and spirit of this community.”

The show, featuring the work of over three dozen artists, will be up all month. It opens with a reception Friday, Oct 4 at Jessel Gallery, 1019 Atlas Peak Road, from 5-8 p.m. Signorello Estate ambassador Tim Gill and the artists will speak at 6 p.m.

Miller learned about the wine boxes from Janis Adams, vice president of Art Association Napa Valley. Adams had a friend working at the winery, who told her that Signorello Estate was going to get rid of 100 wine boxes being stored in a warehouse.

Miller, who is always looking for new ways to foster community spirit through art, was “thrilled” with the idea of having artists use wine boxes – containers integral to Napa Valley’s wine industry - as their canvases.

“It wasn’t long before Tim Gill delivered the wooden crates to the gallery. The wine boxes were from a year that was lost in the fire,” Miller said. “We honor them with this creative process and by bringing new life back to the boxes.”

As Miller distributed the wine boxes to artists, she gave them carte blanche to do whatever they were “moved to do” with the wine boxes.

For most artists, creating paintings on wine boxes was a first.

Lis MacDonald reported that she spent a long time “pondering what to paint on such an elegant and sturdy wine box” before coming across an image of a “stately and colorful barnyard fowl.” Her box sports a regal looking rooster she refers to as Signor Rooster from Signorello Vineyards.

Miller’s comical “Float Your Goat” painting was done with a palette knife. “This was my first attempt at working on wood with a new instrument and it was so much fun,” Miller said. “Humor seems to be my focus when it comes to creatures, and this goat is ready to fly and float.”

Some of the wine boxes contain surprises.

The cover of Guy Buffet’s wine box reveals a man dressed in a black suit and bow tie who is riding a bicycle with a basket of wine above its front tire and an additional basket of wine above its back tire. Appearing nonchalant, the cyclist has his right arm raised up to balance a tray of wine glasses while he maneuvers the bike with his left hand.

Inside Buffet’s humorously painted wine box are wine glasses, napkins, a knife, cutting board and other items that would enhance a luxurious picnic.

Another Buffet painting depicts a chef dressed in white and wearing a toque transporting a basket of chickens and another basket of culinary items on a bicycle through scenic vineyards.

Many artists captured the Napa Valley's bucolic beauty on their wine boxes.

Gayle Simpson painted a rural scene. A tree in the foreground stretches its bare limbs across a pasture where cows are eating, and a rustic barn is in the background.

Another Simpson painting is representative of the “beautiful residences” the artist has seen in the valley. She said it is an homage to the Napa lifestyle. She called it “Tuscan Estate” because it “could be here; it could be in Italy. Napa is very European in many ways.”

“While working on these boxes I thought of two families we know who lost everything in the fires, and are still starting over,” Simpson said. “Even though Signorello Winery lost most of their buildings, they and our friends (who lost their homes) did not lose their spirit.”

Some artists, like Sally Sparling with her “Living on the Edge” covered the entire box with separate paintings of polar bears, penguins and seals.

“This is a box that depicts the beauty of the climate and inhabitants of the edges of our world. These animals live on the edge of their habitat being destroyed. They have no voice to tell us about the impact on their children and families,” Sparkling wrote.

“I have always loved flowers,” Mendelson wrote. “But sometimes they are so spectacular, so showy, so self-confident that they are almost indecent. Wilting flowers, on the other hand, are self-effacing and approachable. I have always been moved by their vulnerability. This wine box seems like an appropriate place to paint a wilting bouquet given that the fires that prompted this show demonstrate nothing if not the ephemeral nature of our landscape and ourselves.”

“There are some wild ones. There’s a wine box with monster tires and another one with an amazing light show. I don’t want to say more about them. I want people to be surprised,” Miller said, laughing.

An artist's World War I series at the Napa Library

Like looking through an old photo album lovingly put together by a long deceased relative, the art on the walls of the Napa Main Library this …