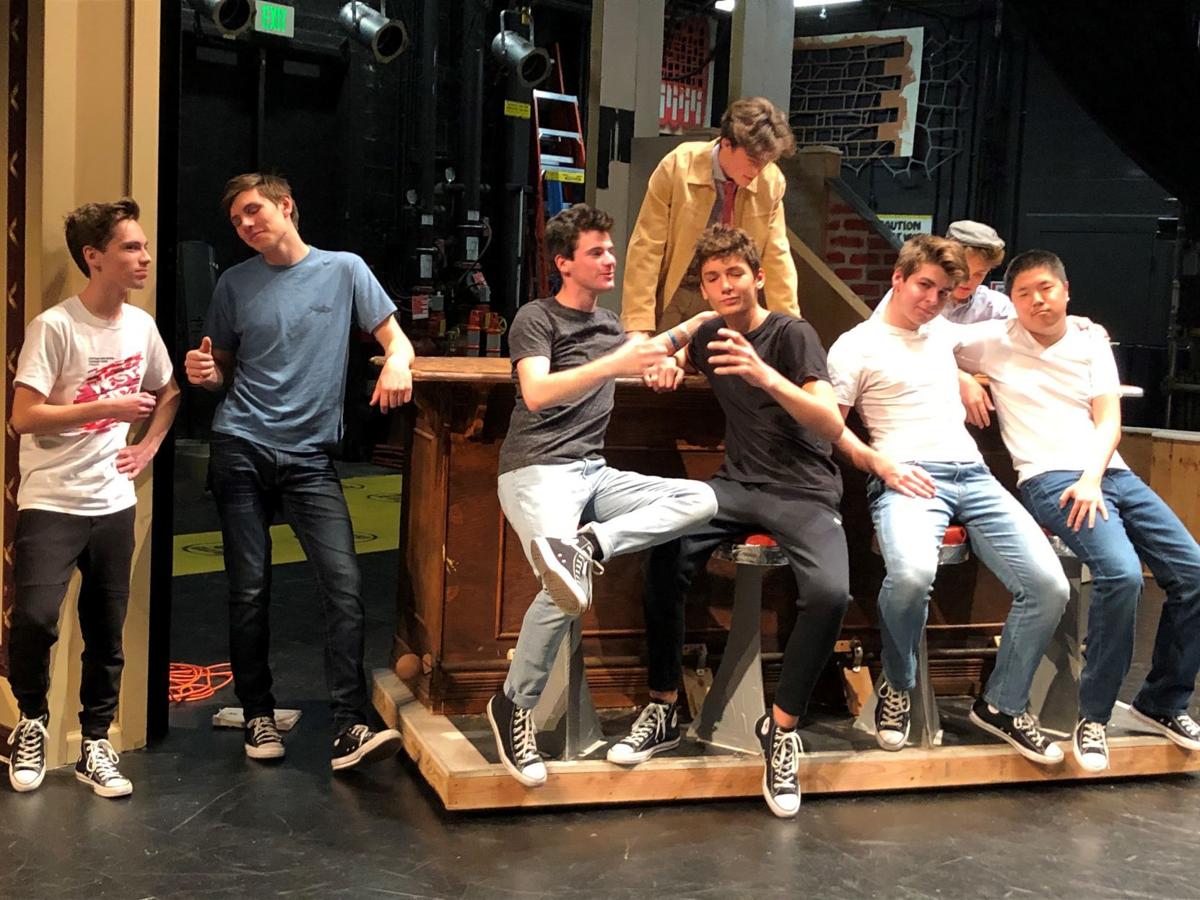 Starring in "West Side Story," are, front row, from left, Shane McGrath, Anthony Marek, Dylan Frye, Matthew Lloyd, Dylan Scott and Parker Gallaway; in the back, Cutler Low and Harrison Barrett in the hat. The musical opens on March 6 at the District Auditorium and runs through March 15. 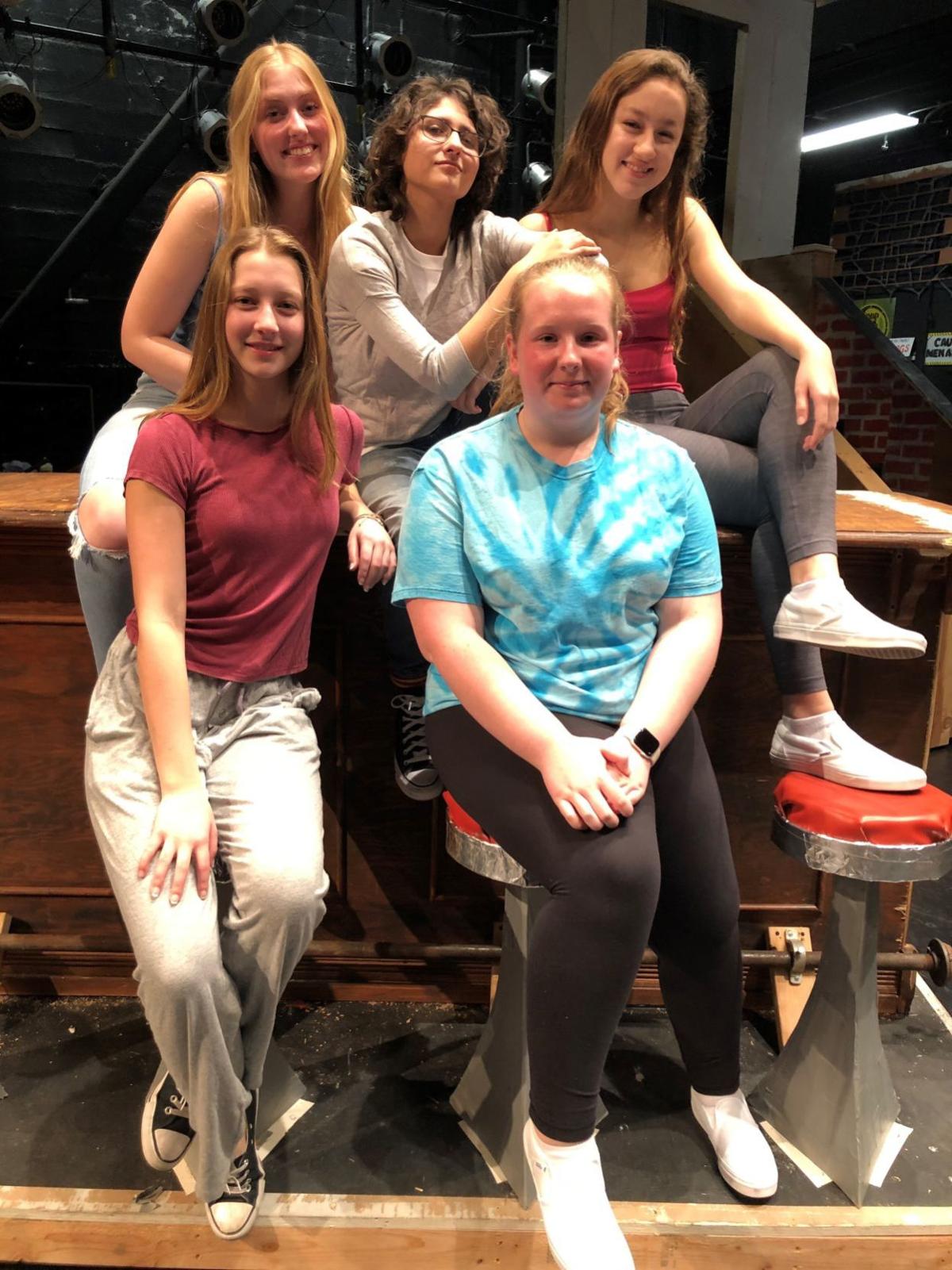 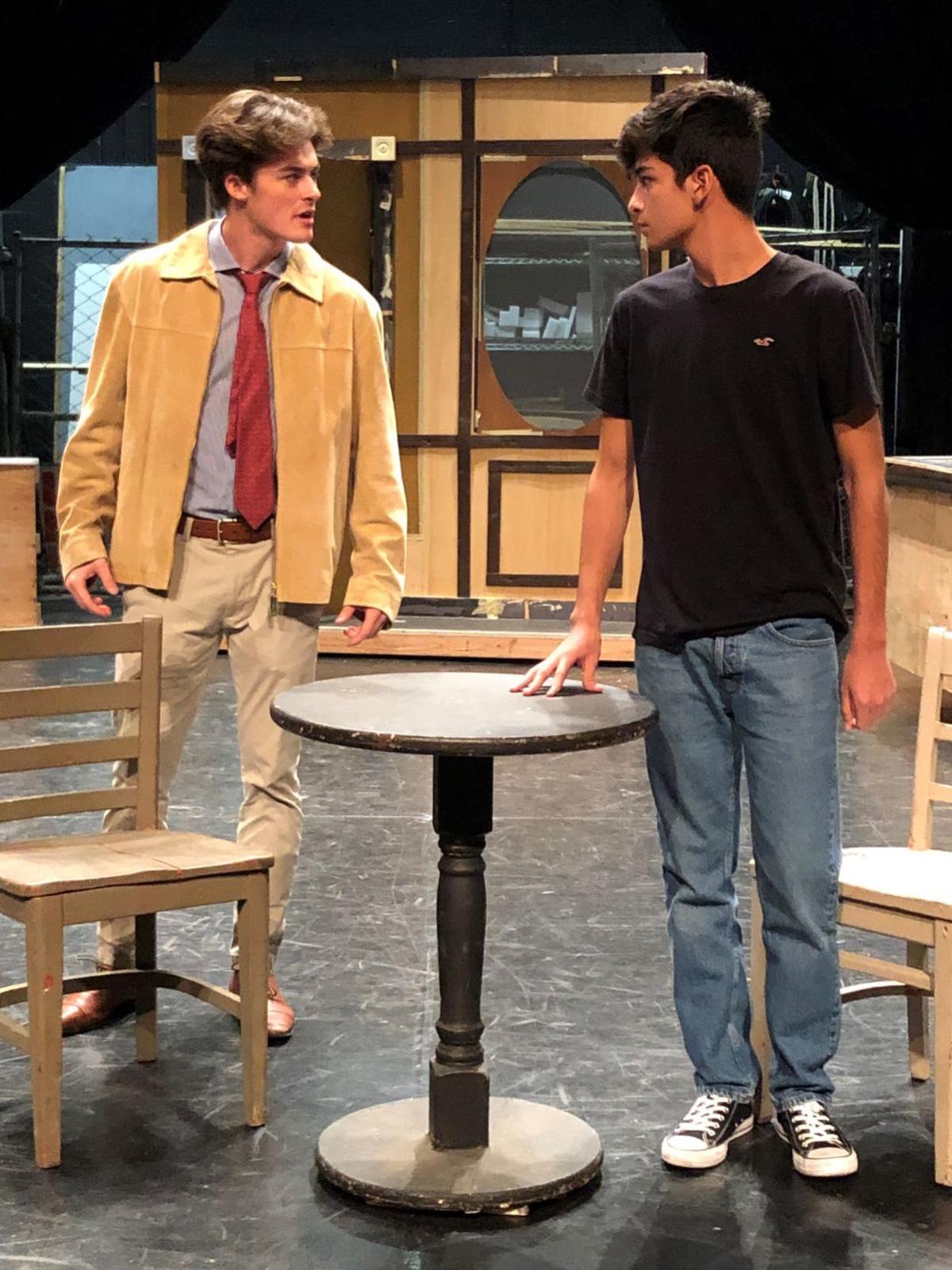 Cutler Low is Tony and Rodrigo Farfan is Bernardo from the rival gangs, the Jets and the Sharks, in Leonard Bernstein and Stephen Sondheim’s “West Side Story,” a modern retelling of “Romeo and Juliet” set in New York City.

Vintage High School’s production of the Tony-winning musical “West Side Story,” opens on Thursday, March 5, with professional sets and costumes, and a cast of 57 dedicated students who have been studying the show since last fall.

Leonard Bernstein and Stephen Sondheim’s “West Side Story,” which premiered on Broadway in 1957, is a modern retelling of “Romeo and Juliet” that is set on the Upper West Side of Manhattan.

Rather than Montagues and Capulets, there are rival street gangs. The Jets are a gang of white teenagers, who are at odds with the Sharks, a gang composed of Puerto Rican immigrants. The Romeo is Tony, played by Cutler Low, who is a member of the Jets. His Juliet is a Puerto Rican girl named Maria, played by Diana Gonzalez.

At a recent rehearsal, the two gangs were in Doc’s Drugstore, just about to negotiate the location of the infamous “rumble,” a violent showdown where the winning gang will take control of the streets.

When they hear Christian Wilson’s Lieutenant Schrank approach, the entire cast panics. They scurry across the stage and mix with each other to make it look like they are all friends. Riff and Bernardo sit side by side at the table, with their arms around one another to project to Schrank the facade of harmony. But Riff and Bernardo are stiff and serious. Despite their close proximity, they seethe with hate for one another.

“Hate only produces more hate,” says Dr. Barbara Nemko, Napa County Office of Education Superintendent, who has acted in many local productions and is the drama coach on this production. That is a lesson she hopes the cast of high school students will learn as they produce the show. “So much pain and suffering to protect a small piece of turf. Yet all around the world, since the beginning of time, we have behaved in this way.”

Nemko was a teenager in New York when “West Side Story” opened on Broadway and was impressed by its groundbreaking message. “If change is ever going to happen, it starts with us,” she said.

The job of preparing the students to take the stage is Mark Teeters and Liz Amendola. Teeters is the choir director at Vintage High and Amendola is a teacher and the department accompanist. They began in the fall of 2019 when the decision was made to do this musical in the spring of 2020.

The students audition to get into Teeters’ class where the musical is taught. Then, once the music is learned, each student auditions for the individual roles. Teeters makes the final decision. “It’s the hardest part of my job,” he says.

Learning to perform the music is only one aspect of the educational experience. There are broader lessons to be learned from a musical like “West Side Story.”

“It has so much to do with our culture,” Teeters said. “We want to teach empathy and the ability to look past skin color, ethnicity or gender and our differences. All of the things that separate us. It’s one of those shows where we have to examine that in our society and address it. It forces you to do that. I think it’s good for the students.”

Another element of learning the show has to do with the historical context in which the show takes place, which Amendola and Teeters always focus on with any new piece of music. For example, the dialogue was written for a New York audience in 1957. The actors were born in Napa in 2005. They had to answer basic questions like, ‘What is the Upper West Side?’ What is “fraba-jaba?” They’ve changed a profane colloquial expression to “when the spit hits the fan” but the kids didn’t even know the meaning of the original. That is not to mention the history of gang warfare in 1950s New York.

Amendola said, “We had to unpack the past for them in order for them to get them into the mindset by examining the sense of otherness and internalizing it. What was it like to feel different from someone else? Do you embrace it? Shun it? What kind of feelings come up with that? You have to have lessons about it. You have to talk about it in class. You have to get them in touch with those feelings, very 21st century feelings, and translate that back to what has been happening in 1959.”

The experience for kids in high school to be a part of a dramatic production teaches so many things, Nemko said.

“I think drama is one of the most wonderful avocations a person can have, especially as a student,” she said. “It gives you a ‘family’ at school. It teaches responsibility; you have to learn your part or you let the other members of the cast down. Same for showing up. You have to figure out time management strategies, because you’ve got to fit this huge block of time into your already overcrowded daily schedule. And it’s fun!”

“Today, while we are working so hard to deal with the increase in mental health issues among our students, the experience of being in a play is a great antidote,” she added. “I think the incidence of bullying among cast members is near zero, and if a student is experiencing that elsewhere in their life, they now have a daily escape and a group of people who can be called on to help. And that’s only during the rehearsal phase.”

“There is nothing like the excitement of getting your costume, your makeup, getting nervous before opening night, and finally, the applause. Or, we hope, the standing ovation. And the recognition you get at school once the play opens. Even if you used to be a nerd, now you’re one of the cool kids!”

John Henry Martin can’t believe what kids do in high school these days. Is your kid amazing? Do they deserve a profile in the paper? Email John Henry at jhm@johnhenrymartin.com.

Napa County youth take on challenges in 'This is My Brave'

Local youth express the challenge of overcoming the stigma of mental illness through performances.

SpaceX crew returned to Earth and other space news you missed

Movies in a Minute: 'Summerland,' 'Cut Throat City,' & 'The Secret: Dare to Dream'

Movies in a Minute: 'Summerland,' 'Cut Throat City,' & 'The Secret: Dare to Dream'

The weirdest Airbnbs to add to your bucket list

The weirdest Airbnbs to add to your bucket list

Coolest drive-ins to visit this summer

Coolest drive-ins to visit this summer

Starring in "West Side Story," are, front row, from left, Shane McGrath, Anthony Marek, Dylan Frye, Matthew Lloyd, Dylan Scott and Parker Gallaway; in the back, Cutler Low and Harrison Barrett in the hat. The musical opens on March 6 at the District Auditorium and runs through March 15.

Cutler Low is Tony and Rodrigo Farfan is Bernardo from the rival gangs, the Jets and the Sharks, in Leonard Bernstein and Stephen Sondheim’s “West Side Story,” a modern retelling of “Romeo and Juliet” set in New York City.