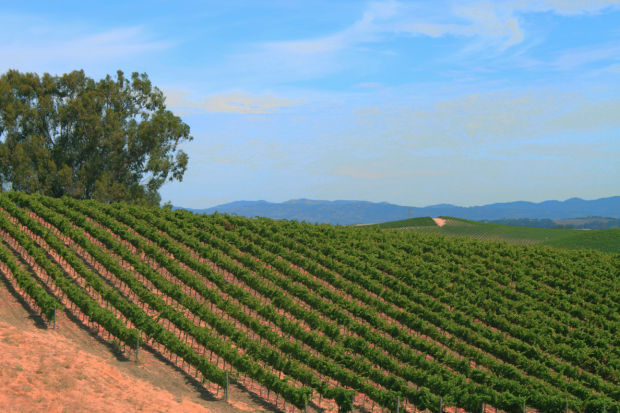 Stony Hill Winery has been growing gewürztraminer on its Spring Mountain property since 1948.

Stony Hill Winery has been growing gewürztraminer on its Spring Mountain property since 1948.

Napa Valley is famed for its big cabernets, which gain great reviews and sell for top dollar. It’s also noted for its big chardonnays, which also fetch premium prices.

So why do a few Napa Valley wineries produce gewürztraminer, a delicate wine, little appreciated by most wine drinkers and most associated with Alsace, the part of France that has toggled back and forth from German to France over the centuries?

Some make it for sentiment, and others because they personally love the wine. Most find it very popular with part of their customers, and it also gives them something special they won’t find at many other wineries.

Most of the producers buy their grapes elsewhere, and Mendocino’s cool Anderson Valley is the preferred source. But at least three wineries grow gewürztraminer in Napa County because they have vineyards in atypical spots.

Peter McCrae’s parents Fred and Eleanor McCrea planted one row of gewürztraminer high up on Spring Mountain in 1948. “They were planting chardonnay, but UC (Davis) said it might not do well, so they suggested diversifying,” he said.

“The chardonnay does very well, in fact, but they liked the gewürztraminer and planted about an acre in about 1952.” They later added two and a half acres more in 1960. The winery now has five acres including the original vines form 1948.

Stony Hill usually makes 200 to 300 cases per year. Its gewürztraminer, like its chardonnay and riesling, has many fans though the winery now also grows cabernet sauvignon at an unusual west-facing ridge at about 2,000 feet.

“We make gewürz because, being in the coolest part of the Napa Valley, Carneros is suited for growing these grapes,” said owner Susan Bartolucci. “Although we can grow cabernet in Carneros — and we do — it is better suited for early maturing varieties such as chardonnay, pinot noir and gewürztraminer that require less heat.”

Madonna Estates grows eight acres of gewürz organically and dry farmed. “This produces better quality grapes that are not pumped up with water,” she said.

She said that they make gewürz as a tasting room wine and for wine club members. “We make it off-dry and slightly sweet, which gives an alternative for people who enjoy sweeter wines that are sometimes hard to find and taste in the valley. People search us out because we do craft a few sweeter wines, and we have developed a following.”

They produce 500 cases a year that they sell direct to consumers and to wine club members. “Economics justifies us producing gewürz,” she concluded.

Baldacci Family Vineyards was established in 1998 by Tom and Brenda Baldacci in the Stags Leap District.

Matt Mills, direct-to-consumer manager at the winery, said that Tom was raised in the small town of Clayton, Calif., and spent his vacations on his grandfather’s farm in Brentwood.

“Grampa Fred Temps was from Hamburg, Germany, and he retained many of his European habits, especially around the table,” he said.

Tom and his siblings were introduced to wine through these European traditions, and, in particular, Grampa Fred had a special affection for gewürztraminer.

Some of Tom’s fondest memories are of summer holidays at the Brentwood Farm ending the family meal with sweet gewürztraminer served over strawberry shortcake.

In 1998, when Tom and Brenda purchased their property, Tom knew that he wanted to use wine as a focal point to continue his family values. The Baldacci Family Carneros gewürztraminer is named Frederich in honor of Tom’s grandfather, Fred Temps.

The wine grapes are grown on the family’s Carneros Honey B vineyard located on Cuttings Wharf. It is made in a totally dry style with floral aromatics and a long, crisp finish. The winery produces between 150 and 200 cases each year, and it is well received by the winery’s club and on sale trade.

Based on the 2013 California Grape Crush Report, the Honey B vineyard accounts for 17 percent of all gewürztraminer crushed in Napa County. The wine is available from the winery for $25 per bottle.

Other wineries in Napa Valley that sell gewürztraminer generally buy their grapes in Mendocino County, but Dario Sattui’s Castello di Amorosa has its own nine-acre vineyard in Anderson Valley to grow the grapes.

“We often try to make wines nobody else does,” Sattui said.

“They’re all very popular,” Sattui said, adding they even though they have a vineyard, they also have to buy grapes in Mendocino County.

Castello di Amorosa specializes in Italian varieties. Although Alsatian gewürztraminer is best known, Sattui pointed out that the grape’s name means “spicy Traminer,” and the Traminer grape is named after a town in South Tyrol in Trentino-Alto Adige, which Italy absorbed after World War I.

Here’s a quick look at other producers:

The Hess Collection produces a dry gewürztraminer sourced from Anderson Valley in Mendocino as part of its Small Block Series wines that are offered just at the winery and in special offers to Hess Collector’s Club members.

Spokesman James Caudill said that Small Block Series wines are typically made in limited case quantities and include a viognier, albariño and grüner veltliner from its vineyards on Mount Veeder, and an orange muscat, also from Mendocino.

They allow the winemakers to explore interesting varietals, and they provide something unique for visitors to the tasting room.

A percentage of sales from these wines also goes to 1% For The Planet, and the donation through that program for the past several years has gone to the Land Trust of Napa.

“People are often delighted to add to their exploration of wonderful Napa chardonnay and cabernet sauvignon something entirely different and often quite refreshing, which a lovely chilled gewürztraminer can certainly be,” said Caudill.

He added, “Paired with cheeses selected by our executive chef Chad Hendrickson, it also allows our wine educators to talk about the concept of dry wines and the range of flavors and varietals available to explore. Gewürztraminer is a wine educator’s dream since it comes in so many styles, from sweet to off-dry to dry.”

Chris Madrigal at Madrigal Family Winery gets his grapes from Stipp Ranch, a certified organic ranch in Potter Valley, Mendocino county. He would love to make Napa Valley gewürz but there were only 9.7 tons harvested in Napa County in 2014, and so he farms varieties that make more sense economically. The gewürz is the only grape Madrigal crushes from outside Napa Valley.

He makes it because he loves Alsatian wines. When he was developing vineyards in Mendocino county for Duckhorn’s Goldeneye brand, he had the opportunity to taste gewürz from Hanz and Theresia Kobler, a Swiss family in the Anderson valley. That got him excited about doing Gewurz.

He tasted Lazy Creek and Navarrao vineyards but knew it was impossible to find Napa Valley gewürz . “It’s a rarity. It took me five years to find gewürz because all the gewürz in the Anderson Valley was taken,” he complained.

Finally, he found it in 2009 but not in Anderson Valley. “I would prefer a little cooler climate but the grapes are great. It’s a project that is near and dear to my heart.”

Madrigal make 200 cases a year for sale in the tasting room only for $30 a bottle. “It sells out every year in tasting room. It’s especially popular amongst visiting guests but it won’t overtake the world,” he said.

Stonehedge Winery, part of the Smith-Anderson Wine Group, also buys gewürztraminer grapes come from vineyards in Potter Valley in Mendocino County. “Because of its cool climate and unique soils, we have found this to be the best place for growing gewürz. There is nothing similar to it in Napa,” said senior winemaker Don Baker.

The wine goes well with Asian and Indian cuisine, and Baker says that the winery are doing a lot of business in those areas. “Our first vintage was 2008, and was a big success so we decided to continue making it. Our production is small, about 300 to 500 cases per year. The wine is slightly off-dry, and fits the Asian palate quite well. Most Asians like their wines to be a bit on the sweet side with a hint of spice.”

Perhaps the best-known producer of gewürztraminer in California is Navarro Vineyards in Philo in cool Anderson Valley in Mendocino County.

Why gewürz? “We’re big fans of Alsatian whites, and so we decided to find a site on which to grow gewürz,” said winemaker and owner Ted Bennett.

“We were armed with UC Davis Viticultural Climate studies, and we also knew that the great wines of Europe were generally from grapes that ripened as autumn ended. So we set off on a two-year quest in California from the Central Coast (Santa Barbara, Santa Cruz, etc.) all the way up to Mendocino.

“In 1973, we picked grapes at Edmeades in Philo in October after some rains. The fruit looked and tasted as good as it seemed in Alsace. We bought the ranch across the street.”

Winemaker Ted Bennett said that after winemaking and grape growing over the last 40 years, most of his regimes were a result of experimentation and re-designing.

All gewürz grapes are estate grown, without herbicides or insecticides. Most recently bottles of flagship estate gewürz was off a recently designed (and successful) trellis that reduces direct sun exposure and cooler fruit midday. The grapes are caned pruned as in Alsace.

He harvests ripe grapes keeping each block separate, destem and press (some blocks with skin contact) without sulfur dioxide (SO2), cold settle, rack to ferment in oak ovals, fermentation ends and casks are topped, SO2 added, rack off of gross lees in April or May, select a blend from the various blocks, and bottle.

He also makes Late Harvest and Cluster Select Gewürz, but not every year. The winery even makes a Gewürz Brut sparkling wine and bottles gewürz grape juice.

The winery bottles about 3,000 cases of estate gewürz each vintage. “We manage to sell it but it is certainly not a widely popular wine,” said Bennett. “I don’t think demand has grown, and given the [high] level of sweetness of most Alsatian imports and most U.S. gewürz, I don’t suspect that demand for serious (dry) gewürz will increase.”

Don't miss out on local history! Check out the Napa Valley Publishing archives!