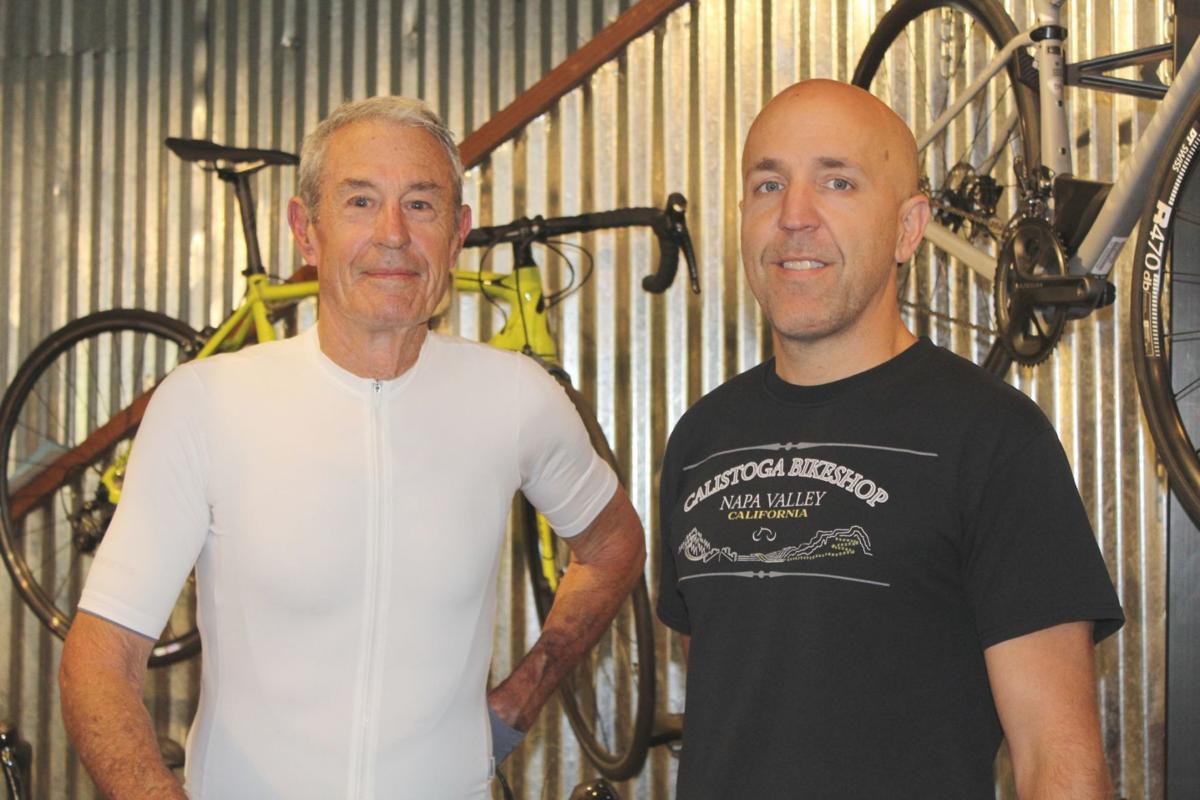 A collection of historic racing bikes hangs in the Calistoga Bikeshop. The bikes are owned by Steve Prevost, left. Brad Suhr is the owner of the Lincoln Avenue store. 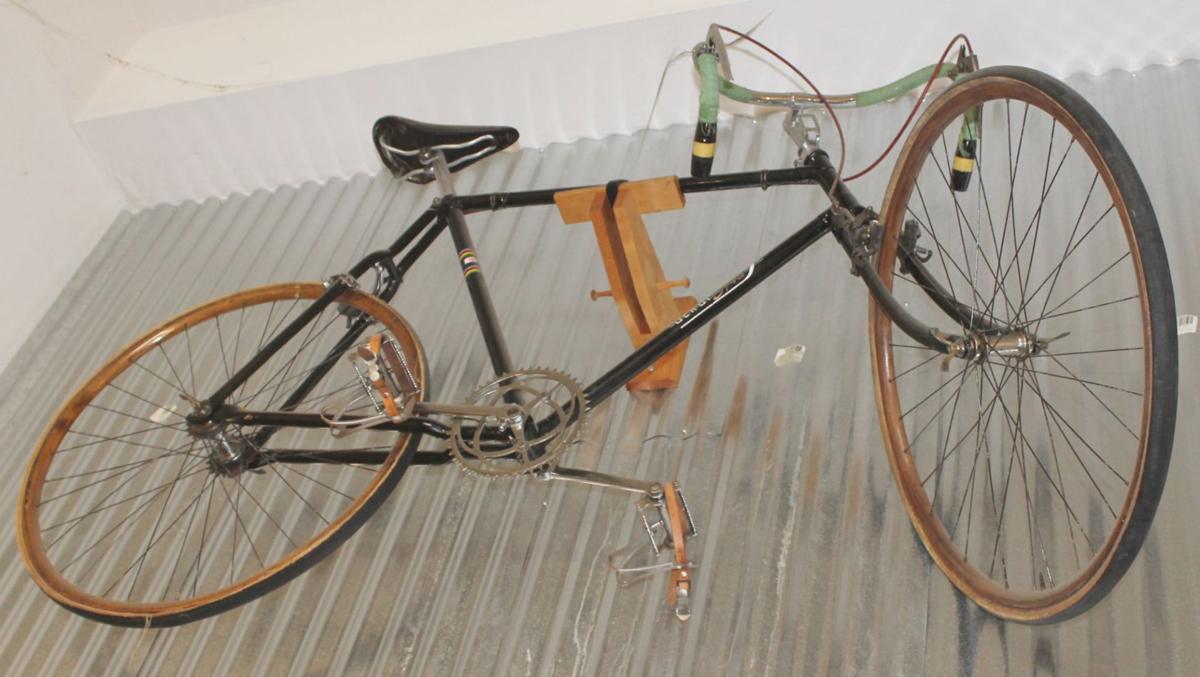 This 1930s Gerbi, raced by Italian cyclist Giovanni Gerbi, has wooden wheels and two gears, one on each side of the rear wheel. It is the oldest bike in Steve Prevost's collection hanging in the Calistoga Bikeshop on Lincoln Avenue. 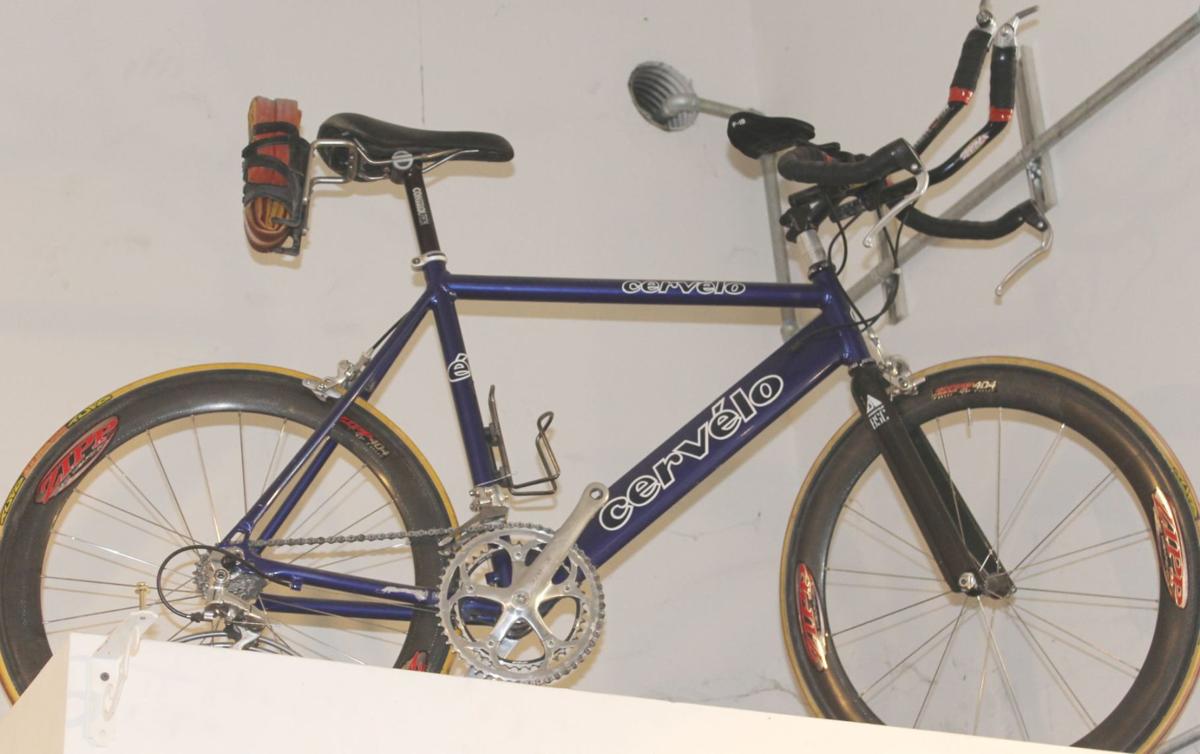 At the time this was built, this blue, 1990s Cervelo was a top-of-the-line triathlon bike, designed in a wind tunnel to act as an airplane wing in the wind. It is part of a collection of historic bikes in the Calistoga Bikeshop. 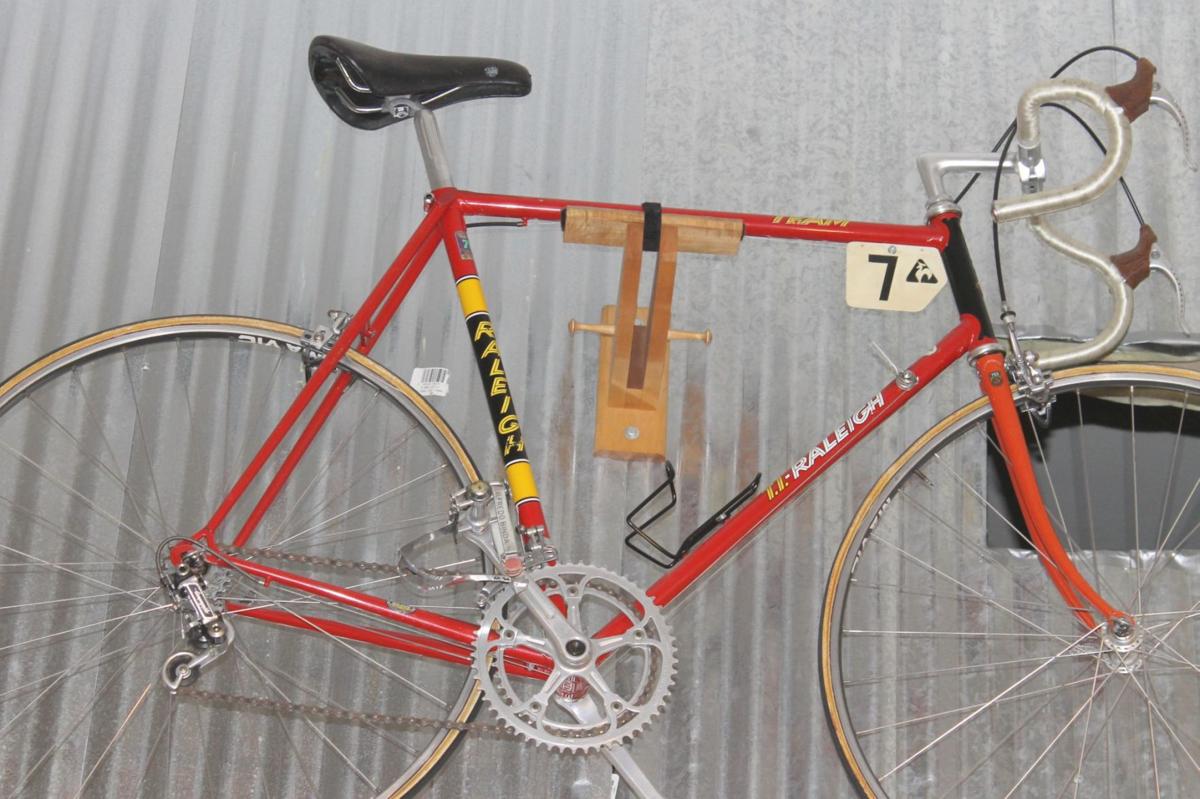 Hanging on the walls in Brad Suhr’s Calistoga Bikeshop on Lincoln Avenue is a collection of historic bicycles, ranging from a bike used in the early 1930s to a triathlon bike used in the late 1990s.

After racing in an early edition of the Tour de France, Italian cyclist Giovanni Gerbi stopped racing in France and raced only in his home country. In 1905, he won the first Giro di Lombardia and went on to win a lot of races in Italy.

After retiring from professional cycling in the early 1920s, Gerbi won the Italian championships in 1932 and 1933.

A 1930s Gerbi, the epitome of a 1930s-style racing bike, is one of the bikes hanging on the wall. With handlebars covered in green handlebar tape, its steel frame has wooden wheels, shod with rubber. Since there’s no derailler or shift mechanicism on this bike, it’s basically a direct-drive, single-speed bike. Suhr said at the bottom of the Alps, for example, a rider would stop and switch the rear wheel around to get an easier gear for going uphill.

Calistogan Steve Prevost has had the bike for 10 years and at last count owns 18 historic bikes, including the ones that hang at the Calistoga Bikeshop.

“I sorta got the racing bug in the late ’70s, when I was living in Half Moon Bay,” Prevost said, who at age 73 is retired and living in Calistoga.

He fell in love with Italian frames, although he couldn’t afford complete bikes, so he would build bikes from parts. He said he bought his first premier Italian frame bike 15 or 20 years later, when a friend who owned it passed away.

The newest bike on the walls is a Cervelo triathlon bike from the 1990s. It is owned not by Prevost but by a longtime Napa Valley resident who did a couple of Ironman events on it, Suhr said.

“He retired it, so we convinced him to let us clean it up and display it because it’s a classic,” he added.

The bike store owner is partial to that bike, because he competed in triathlon events some 15 or 20 years ago, using a Cervelo bike.

“In the late 1990s, there was a movement in the industry to go with a smaller wheel, for a race bike,” Suhr said. “That’s not the same size wheel as a road bike, and the industry has completely moved back away from that. Nobody races that size wheel anymore.”

Additionally, the wheels used tubular tires with integrated tubes that needed to be glued onto the rims, which was much harder than conventional clincher tires.

“Cervelo was the first company that made a triathlon specific frame that was tested in the wind tunnel for aerodynamics and was built with a frame shape that mimics an airplane wing for speed and aerodynamics,” Suhr said.

Prevost’s collection also includes a 1975 Graftek, which was one of the first carbon fiber bikes built in the United States, and a 1984 Teledyne titanium bike, also the first titanium bike built.

There are several Schwinn bikes, both the racing Paramounts and Schwinn BMX bikes from the 1950s with Calistoga bike licenses attached, which Suhr said is very cool because it was “back when you had to license your bike.”

The collection also includes a 1984 Cinelli single-speed track bike, which is a premier Italian bike. Prevost adds it is also very rideable.

The connection to France, though, and the Tour de France – a grueling, three-week race throughout France that has been held since 1903 – continues in the form of a 1981 TI-Raleigh team bike ridden by Dutch cyclist Johan van der Velde.

In 1980, van der Velde won the white jersey at the TdF, being named the best young rider and finishing 12th overall. The following year, he won two individual stages on the TI-Raleigh bike and was part of the winning team that won two time trials in the Tour de France. Again, he finished 12th overall.

His highest finish in the TdF came in 1982, when he was third overall.

Prevost bought the bike from an owner in Holland. The red team bike is Suhr’s favorite bike on his walls, because it was in the Tour de France and for another reason.

“It crashed early in that season in the spring classics and the frame was broken,” Suhr said. “These days you see the riders just throw away a really expensive frame if they wreck it.”

But the Raleigh was sent back to the frame manufacturing facility and the factory re-welded in a steel seat tube “and put it back in service for the tour,” Suhr said.

Prevost said he retired four years ago and, although he still has one more bike to put together, he hasn’t yet done it because he’s getting back to more riding. And racing, through the National Senior Games Association, which is a group that encourages healthy habits for seniors.

Prevost races against others his own age, and half of them race for fun while the other half really compete. In October, he will compete in a regional race in the Bay Area and try to place in the top four in his age group. If he does that, he will be eligible to race in the national games being held in New Mexico in June 2019.

What do Suhr’s customers think of Prevost’s collection?

“We have a lot of customers who key in on them,” he said. “They are bike enthusiasts and they are pretty enamored with the scope of the years they encompass from the ’30s to the ’90s.”

Other customers, though, look at them and “say this is only a steel bike that doesn’t mean anything,” Suhr added.

Fewer than a dozen people attended a July 11 public meeting involving the city’s plans to improve a key gateway to Calistoga.

Things to do in Calistoga

There were the white steeds of the carousel, the towering heights of the Ferris wheel, the stomach-churning rides on the Zipper and the Crazy …

An aspiring real estate agent has appealed to the City Council after the Planning Commission rejected her application to open an office downtown.

Along with a renovated interior, Calistoga Bikeshop has shifted inventory to ride the wave of new electric assist bikes.

A collection of historic racing bikes hangs in the Calistoga Bikeshop. The bikes are owned by Steve Prevost, left. Brad Suhr is the owner of the Lincoln Avenue store.

This 1930s Gerbi, raced by Italian cyclist Giovanni Gerbi, has wooden wheels and two gears, one on each side of the rear wheel. It is the oldest bike in Steve Prevost's collection hanging in the Calistoga Bikeshop on Lincoln Avenue.

At the time this was built, this blue, 1990s Cervelo was a top-of-the-line triathlon bike, designed in a wind tunnel to act as an airplane wing in the wind. It is part of a collection of historic bikes in the Calistoga Bikeshop.