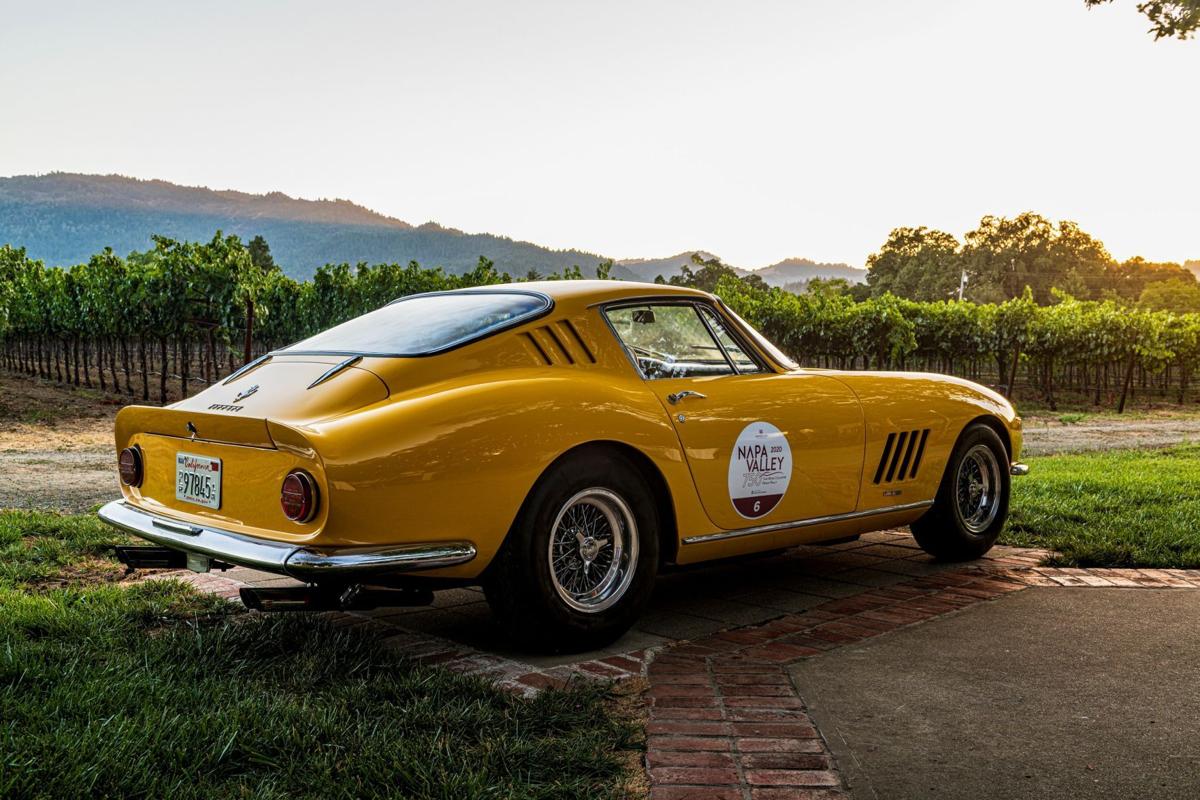 A 1967 Ferrari 275 GTB4, one of the cars participating in the first wine country road rally. 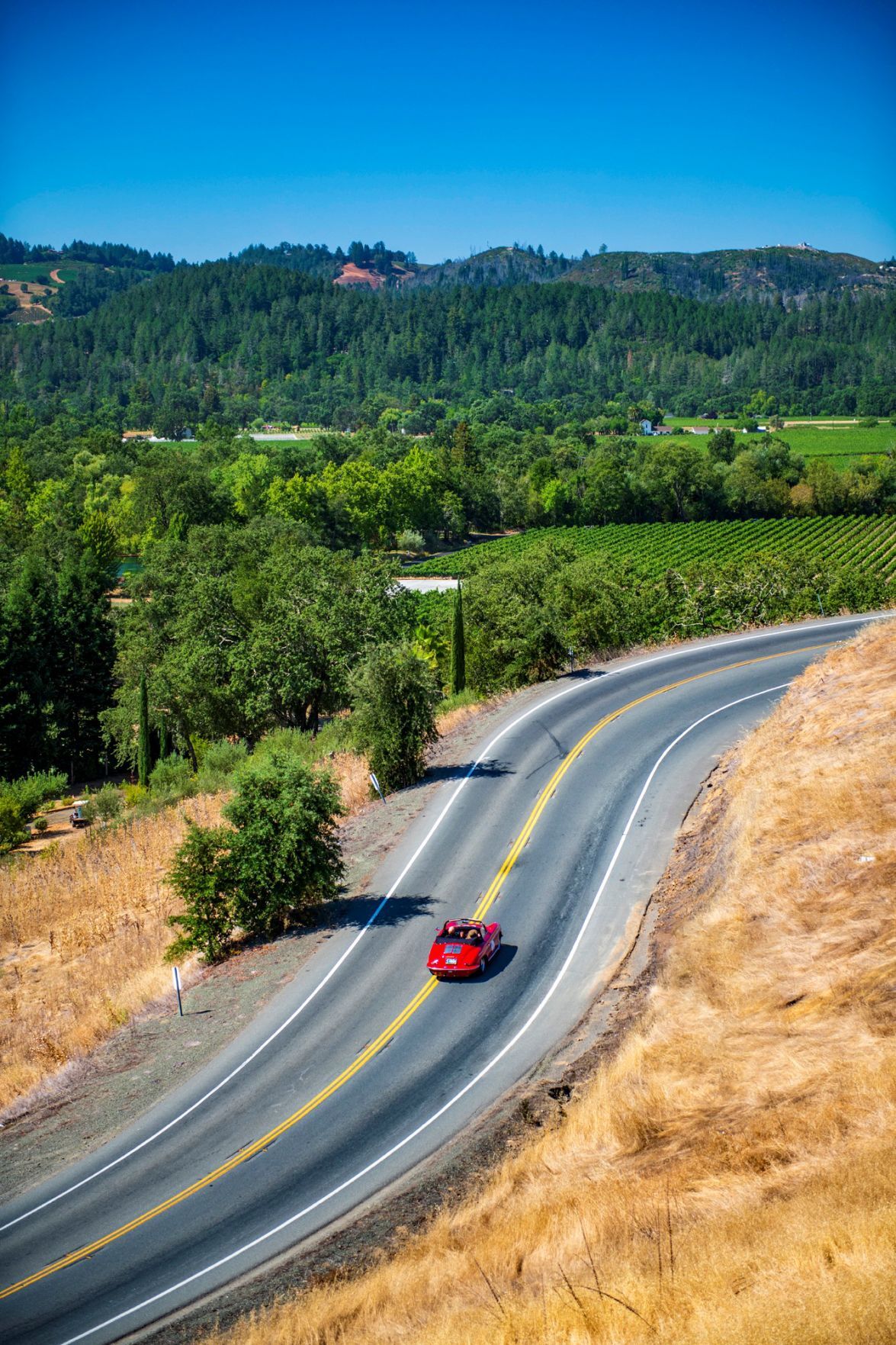 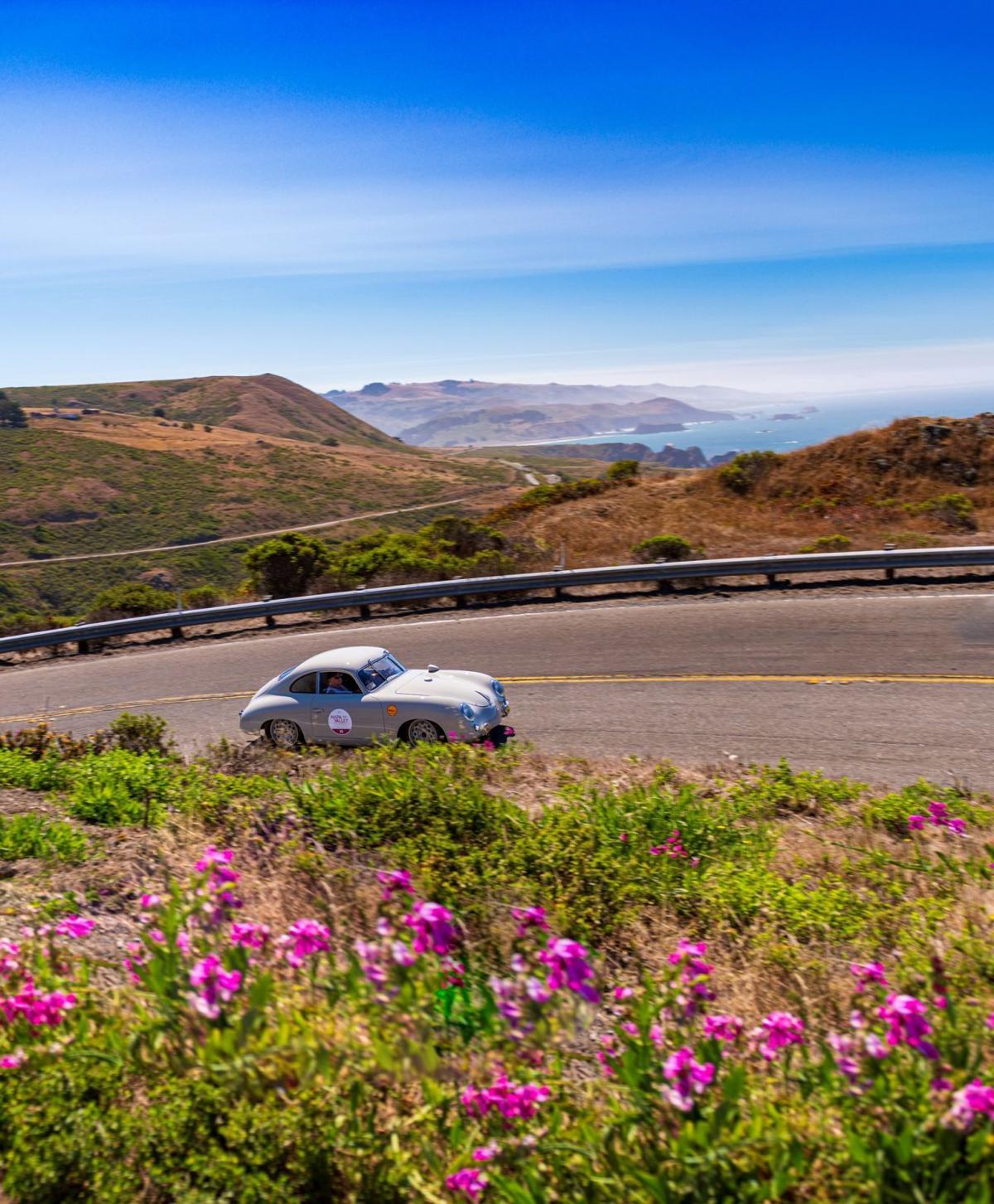 A 1953 Porsche 356 Outlaw at the California coast. The route went through Napa, Marin, Lake, Yolo, Sonoma and Mendocino counties. 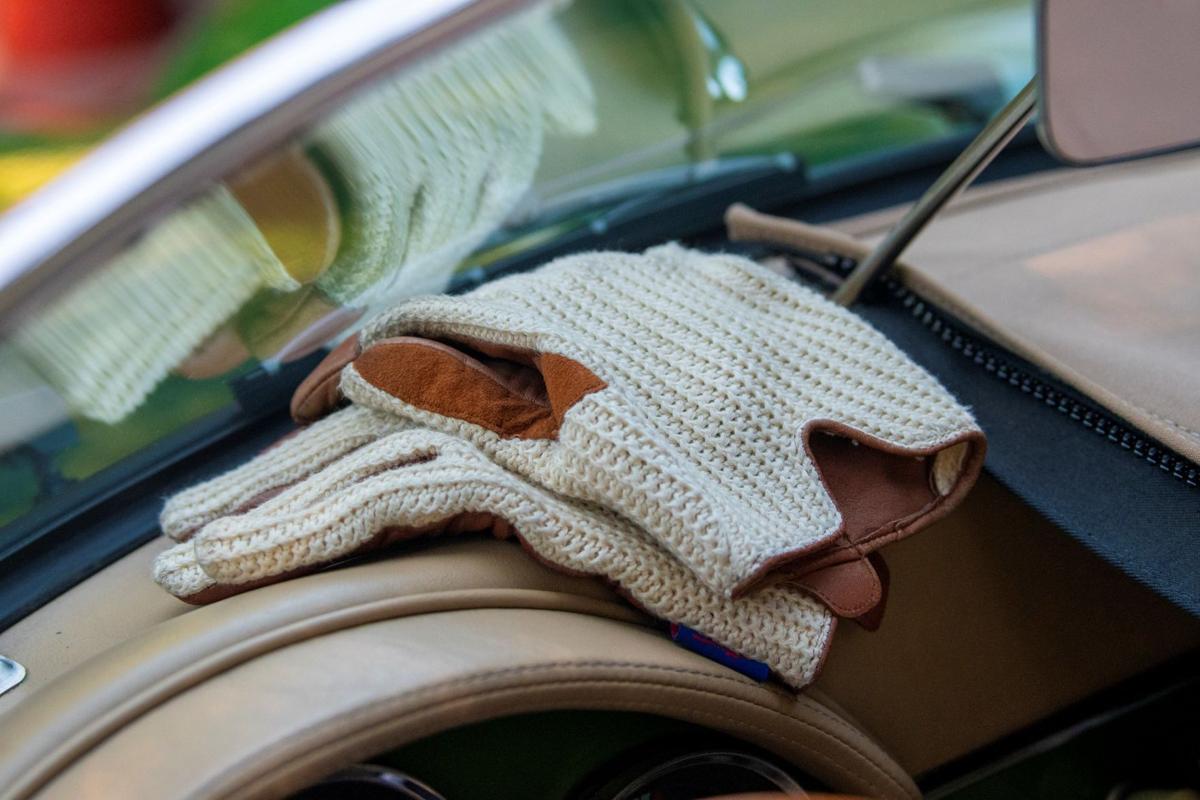 Driving gloves from the first wine country road rally in the U.S.

The first rule of a road rally is that it’s not a race.

Or, more simply put by Rick Kaufman, a principal owner of St. Helena’s Harvest Inn, it’s an event for people who “enjoy the smell of gasoline” and “share a common interest in cars, tinkering with cars, and enjoying scenery,” much like people enjoy fly fishing in Montana.

Other important rules of a road rally, which may or may not always be followed, are to obey local laws, avoid speeding, pass safely and never cross a double yellow line.

Kaufman is the (pun intended) driver behind Napa Valley 750, the first wine country road rally in the U.S., which after an initial postponement in April, took place the first week of August. Over the course of three days, roughly 24 participants in a dozen or so perfectly-polished, brightly colored cars—a mix of vintage and new—covered 750 miles of twisty, vineyard-dotted, scenic road. Highways were avoided as much as possible because, as Kaufman quipped, “Highways are for station wagons.”

The point, he said, is to fully enjoy the manual. He even owns a shirt that reads, “Save the Manual.”

“The back roads are really where you get to shake out your car and rattle your teeth,” Hagar added in agreement. “It’s a more tactile experience to shift the gears.”

Turning heads at every turn, the cars made ambitious pilgrimages through Napa Valley, Marin, Yolo and Lake counties, and as far north as the Sonoma Coast and Mendocino County. The soundtrack wasn’t music, but the roar of the engines, and in some cases, the wind in one’s hair, if the car was open top. Couples bantered over navigation (as they do) and some drivers, like Kaufman, smoked the occasional cigar along the way. The goal of each day: have fun and enjoy the ride, make it to lunch on time, try not to get lost and don’t break down.

But being that many of these cars are old and rarely driven, there were a number of breakdowns and subsequent tows. The beauty of that, Hagar pointed out, was that later, a handful of drivers would stay up until the wee hours of the morning working on it together. “There’s a camaraderie here that has no boundaries,” he said.

The car-collecting participants were pretty evenly split between a cohort from Colorado and Northern California locals, and most were longtime friends from the sport. As for the cars, in attendance was a 1957 Jaguar D-Type driven by KR Rombauer, a 1953 Porsche 356 Outlaw (the oldest of the bunch), race car driver David Donner’s 1973 Dino 246 GTS, a 2012 Lamborghini Aventador, Hagar’s tiny, impossibly low-to-the-ground 2013 Morgan 3-Wheeler, and Kaufman’s bumblebee yellow 1967 Ferrari 275 GTB/4, to name a few.

Kaufman has been attending road rallies for 16 years and grew up in the world of motorsports, thanks to his father working as a race track doctor. He set out to make this road rally different than all other road rallies, which take place all across the country. First and foremost, there was a charitable component.

The event benefited the St. Helena Hospital Foundation and raised more than $10,000, in part thanks to the auctioning off of a painting Hagar completed for the cause. It depicted Kaufman’s yellow Ferrari driving a wine country road. Auction winner Scott Long also snagged the right to have his car on the cover of next year’s Root Book.

But the biggest difference between this rally and others that this group has attended in the past was what occurred when the drivers weren’t in their cars. At most rallies, participants often have to shlep from one modest hotel to the next each day and the food is only as good as what the destination offers. According to one driver, hamburgers and hot dogs are not uncommon lunch fare, but by hosting a road rally in Napa Valley, Kaufman was able to tap into everything the region is famous for: world-class wine, food, and hospitality.

And so, the drivers spent every night in premium accommodations, some with a vineyard-view hot tub, at the romantic Harvest Inn. The drives were broken up with socially-distanced, multi-course lunches at the Albion River Inn Restaurant, the Calistoga Inn Restaurant & Brewery, and Aperture Cellars, the much talked about and recently-opened winery in Healdsburg, which hosted lunch from chef Dustin Valette of the iconic Valette Restaurant.

Set at the Harvest Inn, Far Niente Winery, and Inglenook, dinners also featured multiple courses, but this time paired with endless pours of local wines since, at night, no one had to drive. The conversations got nerdy, though they weren’t about hang times and fermentation techniques, like most Napa Valley wine dinners. Instead, the talk was of engines, carburetors, clutches, and fan belts.

“He nailed it,” said Hagar, who resides in Lake Tahoe and has been friends with Kaufman since childhood. “He raised the bar to such a standard that it’s, like, game over.”

“He nailed it. He raised the bar to such a standard that it’s, like, game over.” Aaron Hagar, on the first Wine Country Road Rally

“He nailed it. He raised the bar to such a standard that it’s, like, game over.” Aaron Hagar on the first Wine Country Road Rally

“He nailed it. He raised the bar to such a standard that it’s, like, game over.”  Aaron Hagar on the first Wine Country Road Rally

These days, a simple trip to Sonoma County can feel like a big adventure. Here are two new wineries to explore.

Jess Lander Leftovers: Eating on the run from wildfires

Jess Lander and her husband moved accommodations four times during the latest fire evacuations, and aside from “wWhere are we going to sleep tonight?” the big question of each day, since they were suddenly living without a kitchen, was “What are we going to eat?”

A tasting in light and dark: Faust Haus opens in St. Helena

Faust Haus, a tasting room for the Coombsville AVA wine, is now open in St. Helena.

Tahoe unmasked: A high-energy escape to the Sierra

After six months at home, travel writer Robert Kaufman ventures out and up to Lake Tahoe to explore the links and embark on a challenging bike ride around the lake.

These tales of survival are often rife with tragedy and despair yet also ripe with glimpses into other cultures from Asia to Latin America. “Separated” exposes the truth behind the humanitarian crisis brought about by Donald Trump’s decision to separate thousands of migrant families at the border.

The long road to justice: The 37-year search for a Napa woman's murderer

Retired Judge Raymond Guadagni has published an account of the murder of Anita Fagiani Andrews in Napa in 1974, the 37-year effort to find her killer and his trial 2011 at which Guadagni was the judge.

A 1967 Ferrari 275 GTB4, one of the cars participating in the first wine country road rally.

A 1953 Porsche 356 Outlaw at the California coast. The route went through Napa, Marin, Lake, Yolo, Sonoma and Mendocino counties.

Driving gloves from the first wine country road rally in the U.S.