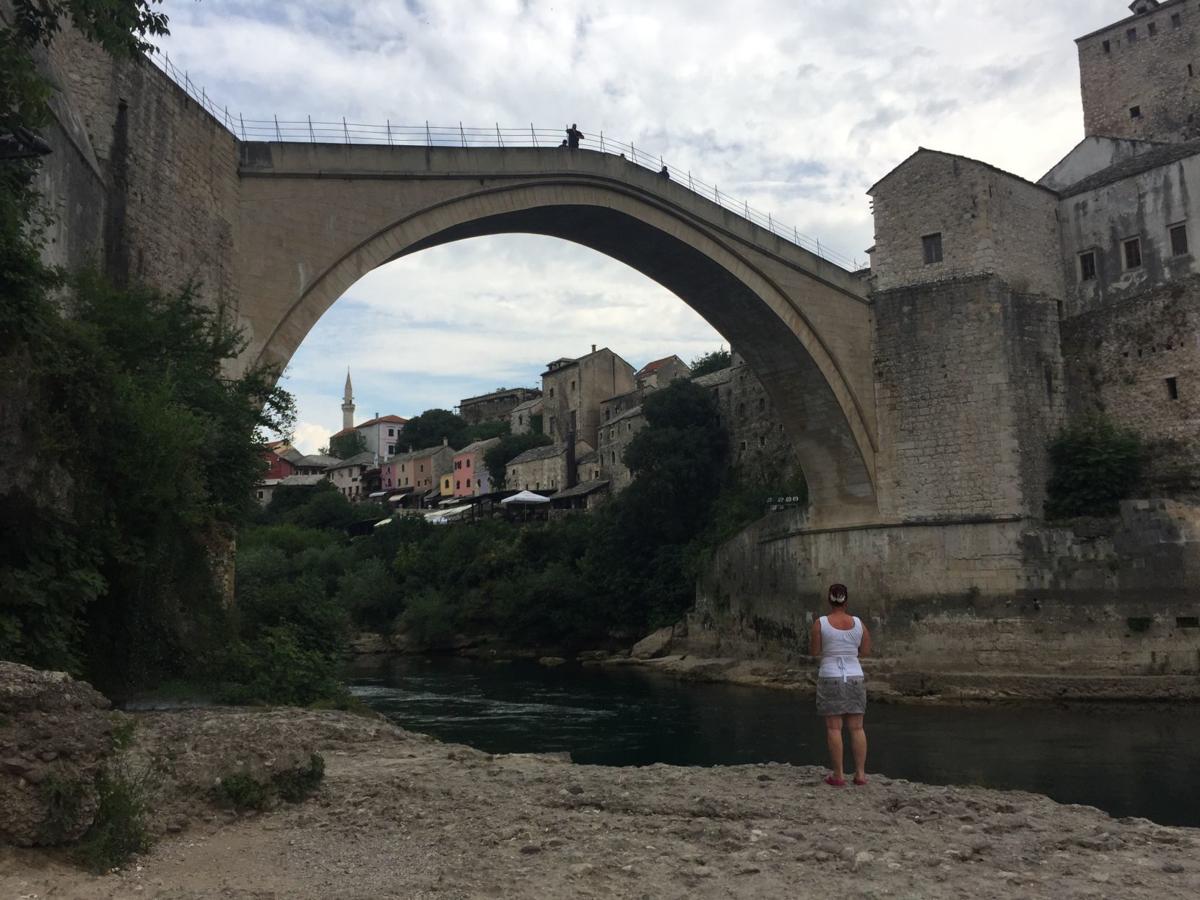 Bosnia, a small Balkan nation, is drawing more visitors to explore its many treasures. 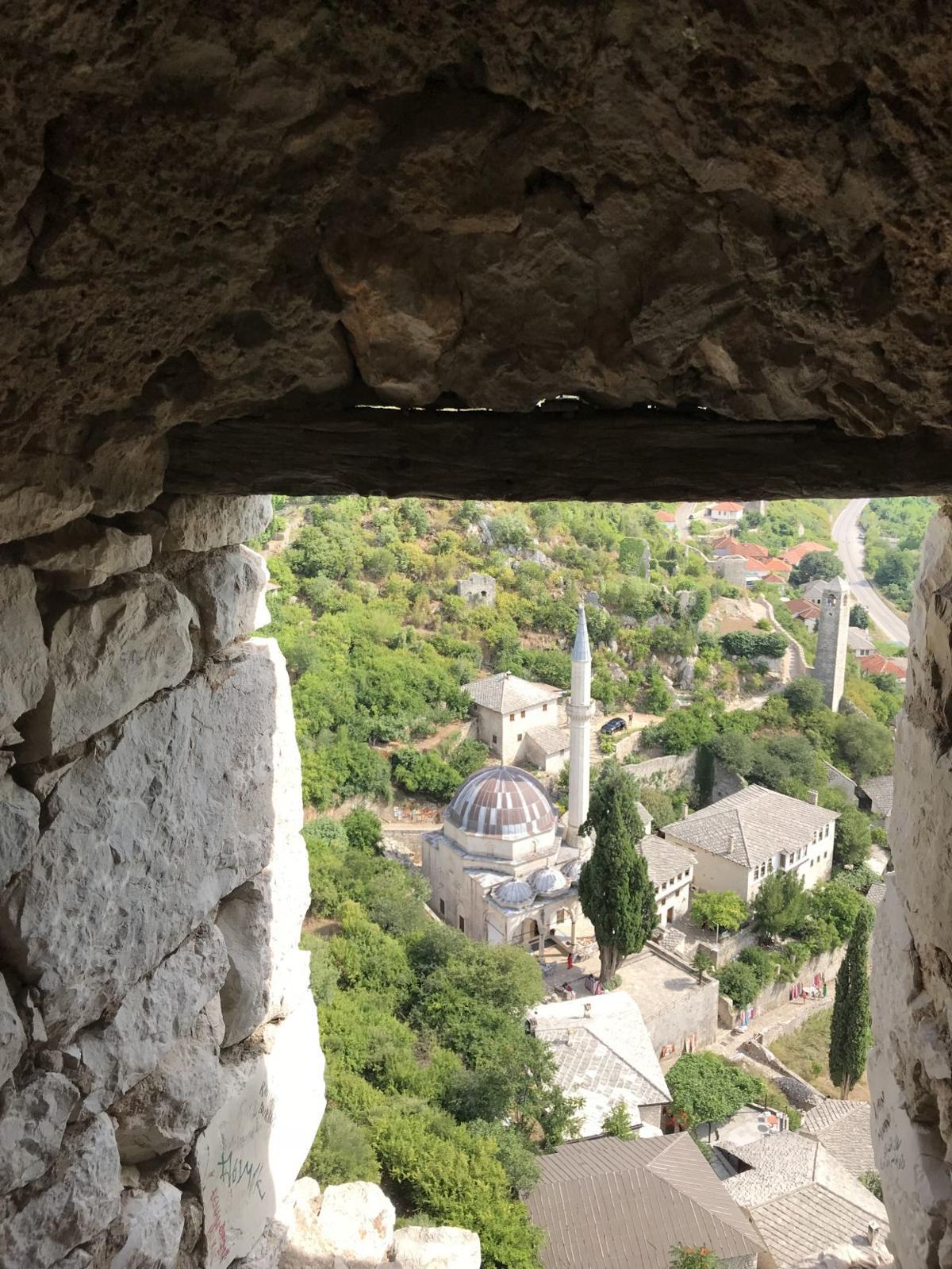 Religious buildings dating as far back as the 16th and 17th centuries are spread throughout in Bosnia. 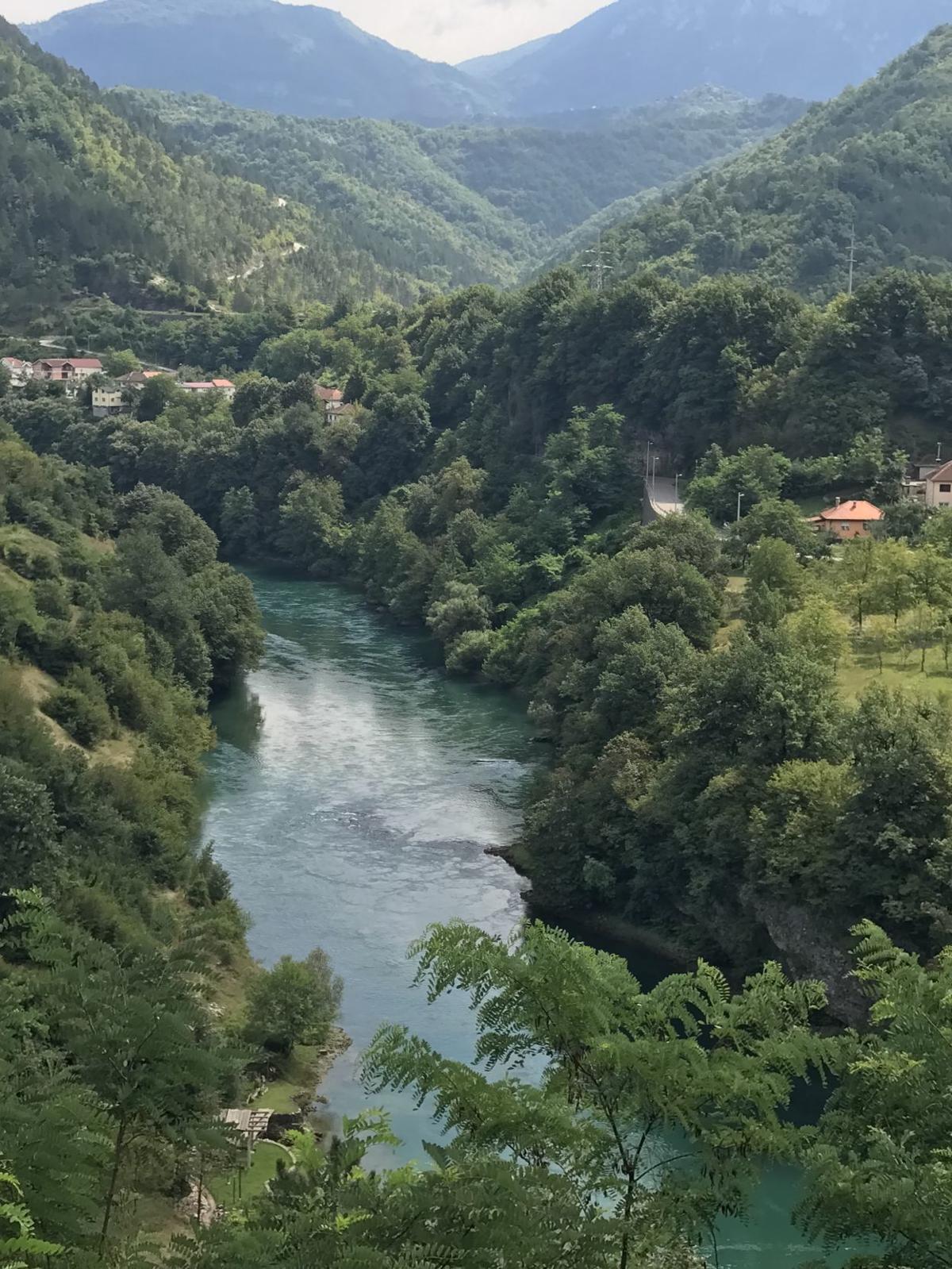 A view of the Bosnian countryside.

For many people, the word “Bosnia” evokes images of war and suffering. The 1990s were not a kind decade to this ancient land whose people suffered as a result of ethnic cleansing and genocide campaigns by Serb and Croat nationalist forces. Today, the country is no longer embroiled in war, but the political situation in the country is still far from ideal. Despite its problems, tourists come to this Balkan country en masse every year.

What is drawing them to this small European nation of approximately 3 1/2 million people? Much like its neighbor Croatia, Bosnia and Herzegovina are experiencing a healthy tourism growth rate, one of the highest in Europe. Bosnia’s affordable prices, proximity to other European capitals, culinary delights, and historic and natural beauty have been potent magnets for travelers around the world. Bosnia carries a blend of traditions — medieval, Ottoman, Austro-Hungarian, Yugoslav, and uniquely Bosnian — and this is evident everywhere from its architecture to its cuisine.

Bosnia is a multi-ethnic and multi-religious country, and its capital, Sarajevo, was the first European city to feature a mosque, Catholic Church, Orthodox Church, and synagogue on the same block, earning it the nickname the “Jerusalem of Europe.” Religious buildings dating back to as far back as the 16th and 17th centuries are prevalent. The style is a mix of traditions as a result of its history as an independent kingdom, and territory within the larger Ottoman and Austro-Hungarian empires.

Sarajevo, a city that withstood the longest siege in the history of modern warfare, played host to the Winter Olympics in Yugoslavia in 1984, only a few years earlier. Skiing, winter sports, and outdoor activities are popular in the region, and many European tourists enjoy the lower prices for lodging, food, and activities, even compared to its neighbors Croatia or Slovenia, which are experiencing the beginning of over-tourism and significant crowds. Sarajevo’s old town district, known as Bascarsija, is a maze of cobblestone streets and artisan shops where traditional metal work is still practiced by the city’s craftsman guilds.

Historic and architectural treasures abound in Bosnia with numerous forts and castles dotting the landscape. One of the most beautiful architectural pearls in the country is the ancient settlement of Pocitelj, near the southern city of Mostar, which is a popular day-trip destination for tourists on the Dalmatian coast. The city resembles an ancient fortress, seemingly carved out of the hillside.

One of its immediate distinguishing features is its central citadel. It was constructed by the Bosnian King Tvrtko I in 1383 as a way to cement control over the local region on the way to the Adriatic Coast. Most of Pocitelj’s structures came with the arrival of the Ottoman Empire. Many of the surviving structures in Pocitelj are from the 16th and 17th centuries, including a sahat-kula (clock tower), the original residence of the ruling Gavrankapetanovic family, the Hajji Alija (1563) mosque, and other notable structures. It is easy to imagine the sleepy settlement as it once was, a busy strategic and economic center of trade. The spectacular views of the river valley alone are worth a visit.

Nearby is the the largest city in Herzegovina, Mostar, another must see destination. Its 16th century stone bridge, the Stari Most, (Old Bridge) is a UNESCO World Heritage site and host to an annual bridge diving competition. Some brave locals will routinely dive into the frigid waters of the turquoise Neretva River below. The arching bridge was constructed by Ottoman architect Mimar Hayruddin, a student of the famous Mimar Sinan. According to legend, Hayruddin was tasked with building the bridge but feared failure so badly that he prepared for his own funeral before the scaffolding was removed on the bridge.

In 1993, the bridge was destroyed by Bosnian Croat military forces but has been since rebuilt with much of the original stone recovered from the Neretva river below, thanks to donations from the international community. Besides its iconic bridge, Mostar offers a quaint old town district, complete with small handcrafted goods stores, restaurants, and historic sites such as the Partisan cemetery, nearby Kravice waterfalls, and the Koski Mehmed Pasha Mosque.

A short drive from Mostar is the ancient Sufi monastery, perhaps the oldest in the region, of Blagaj. The Blagaj Tekija or Tekke, is a Muslim religious settlement that was built at the source of the Buna river, located inside of a cave. The tekke was constructed in 1520, at the source of the Buna River, which some speculate was because of an earlier Bosnian Church tradition of constructing religious sites at the source of rivers. Today, much of the complex is preserved and guests are invited to explore the inside of the monastery and various buildings.

Farther north is another untouched jewel, which, amazingly, still exists in our modern world: the settlement of Lukomir near the capital Sarajevo. Lukomir is one of the last semi-nomadic mountain villages in Europe. The small settlement is virtually inaccessible during the winter months, sitting at an elevation of 4,900 feet near Bjelasnica Mountain, which also served as a venue during the 1984 Olympic Games. Much like Blagaj, Lukomir is a quiet escape from modernity where history is still at peace with modernity.

An impromptu outdoor museum, Lukomir’s houses are mostly constructed out of stone and wood shingles and still houses a small community of residents who calls it home for part of the year. The Historical Architecture Society of the United Kingdom has considered Lukomir to be one of the longest continually inhabited villages in all of Europe.

To the northwest of Lukomir are the central Bosnian cities of Travnik and Jajce. Constructed in the 14th century, Jajce was once known as a royal city because it served as the home for several members of the Bosnian royal family. Its most prominent feature is its waterfall, which feeds into the Pliva and Vrbas rivers and lake below. Much like other cities in the country, its old city is still preserved and some notable attractions include an ancient Temple of Mithras, Komotin Castle, the royal catacombs, and a variety of churches and mosques. It is rumored that the city also served as a hiding place for Yugoslav leader Josip Broz Tito, who was the leader of the partisan resistance to Nazi occupation.

Nearby Travnik is known as the “city of the viziers,” because of its role as the capital of the Ottoman-controlled Bosnian province. The city is said to have contributed numerous high ranking officials to the service of the sultan. Today, much of the old city is still preserved, including the home of Bosnia’s Nobel Prize-winning author Ivo Andric, famous for his book “Bridge on the Drina.”

Travnik is also known for its sheep’s cheese known as Travnicki sir, a local delicacy. Cevapi, small beef or beef and veal mixture sausages that are paired with a soft flat bread known as lepina, are one of the most popular dishes in the country and can be found almost anywhere. Other popular dishes include burek, (a savory flaky pastry usually rolled into a spiral filled with seasoned ground beef or other ingredients like cheese, potatoes, spinach, or squash), sarma (meat and rice rolled in pickled cabbage leaves), Bosanski lonac (a Bosnian meat and vegetable stew cooked over an open fire) and sudzuk (spicy beef sausage). For dessert, common options include baklava, halva, tulumbe, or tufahije (sweetened and stewed apples with a walnut filling).

Bosnian coffee, which is similar to Turkish coffee, is usually paired with any dessert. In fact, coffee culture is immensely important in Bosnia, so don’t find yourself surprised if you are routinely invited to these protracted sessions of caffeinated bliss.

Beyond sightseeing, Bosnia is a major destination for outdoor enthusiasts of all kinds. Hiking, fishing, skiing, kayaking, canoeing, swimming, horseback riding and a variety of other activities are immensely popular, and the country is home to one of the last primeval forests in Europe, located in Sutjeska National Park, which also served as the background for important battles against Axis occupation in World War II. The small city of Neum, on the Adriatic Coast, serves as a summer getaway for many people in the country.

Bosnia and Herzegovina is a country with immense historic and natural treasures. The warm-hearted hospitality of its people leave anybody that visits with a sense of belonging and inclusion. As one famous local legend dictates, if you drink the water from the Sebilj fountain in Sarajevo, you are bound to return to the city. The same can be said for the country in general. Sip from the experience once, and you are bound to return.

Albinko Hasic is a native of Bosnia, now living and working in New York. He is the founder of BosnianHistory.com.

PennyWise Episode 5: How to Prioritize Your Debt Payments

Why masks could still be necessary in 2022

Why masks could still be necessary in 2022

The best dog breeds for families with kids

The best dog breeds for families with kids

Here's why that second coronavirus shot can be such a doozy

So you finally got your coronavirus vaccine. It took weeks of waiting, maybe a few calls before hitting the jackpot with a drive-through vaccination clinic. Or maybe you're a health care worker who got the shot at work.

What is it like to have your school shut down abruptly and shift to online learning? What's it like when this goes on for a year? Angelica Morales, a seventh-grader in Napa, shares her experiences.

Vaccinations can banish COVID. So can a summer-like day in February with live music.

In the late 1800s, a Napa woman, Elodie Hogan, married her determined European suitor, Hilaire Belloc, who would gain fame as an orator and author. The course of their romance was far from smooth, however, and involved a cross-country hike and a meddling mother.

Get ready for a sauerkraut dish you’ll never forget.

How to prevent indoor rodent invasions

The best way to deal with rodent problems is to prevent rats and mice from ever getting inside in the first place. That can be easier said than done.

Greg Kelly, a cable channel host, has been skewered online after disparaging President Biden’s dog Champ, saying he looks “from the junkyard.”

The cities with the highest (and lowest) rental vacancy rates

The pandemic has disrupted many aspects of life, and some of the most significant shifts have occurred in housing. A combination of factors could lead to high activity in some parts of the rental market while creating uncertainty or vulnerability in others.

Carol  Hall, keeper of the Girl Scout supply of cookies during the annual sale, converts her garage each year into the "cookie cupboard" for Napa and Yountville.

Bosnia, a small Balkan nation, is drawing more visitors to explore its many treasures.

Religious buildings dating as far back as the 16th and 17th centuries are spread throughout in Bosnia.

A view of the Bosnian countryside.