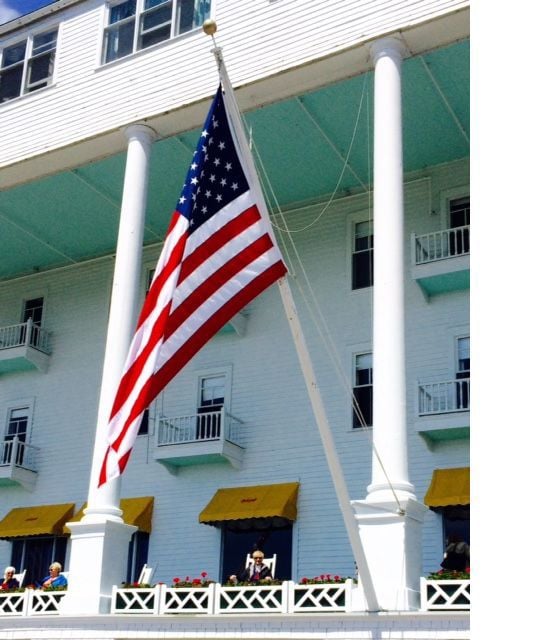 Do unusual things happen to you on your vacations? They certainly seem to happen to us. I think that the travel gods know that I like fun and unusual stories for my column.

Potpourri is an old-fashioned French word that refers to a Spanish stew made of many ingredients. That is why I call this column a potpourri. It is full of fun, odd and wonderful experiences we had traveling across the U.S. for the past six weeks. Philip’s 55th Yale reunion was our main reason for the trip, but on the way to New Haven we made several new stops on our bucket list, did some genealogical research, and visited new places.

After a few days on Interstate 80 we bypassed Chicago and aimed for Milwaukee where we enjoyed touring the Harley-Davidson Museum and factory. After 30 years of riding these big machines, Philip wanted to make the pilgrimage to the Harley-Davidson “birthplace”. Then it was north and around Lake Michigan to Mackinac Island.

If you have the chance to visit the Grand Hotel on Mackinac Island, be sure to watch the classic 1980 movie “Somewhere in Time” staring Christopher Reeve and Jane Seymour. You, too, will want to sit on the long veranda looking at the water while someone is taking your picture. The island is accessible only by ferry. No cars are allowed so transportation is by horse-drawn wagons, bicycle, or foot. We toured by horse-drawn wagon driven by a young guide and enjoyed the beauty of this famous resort island in Lake Huron.

Sailing Master Steven Champlin fought with his uncle, Oliver Hazard Perry, at the Battle of Lake Eire during the War of 1812. The American fleet sailed from Put-in-Bay, Ohio to meet and defeat the British fleet. The quaint town of Put-in-Bay is also on an island. You must take the ferry and rent a golf cart to get around. Philip wanted to see the tall tower commemorating Perry’s naval victory. But he was disappointed that the replica of Perry’s ship was sailing, so we drove to its homeport of Erie, Pennsylvania to visit the Maritime Museum.

In the 17th century. Philip’s 11th great grandfather, John Howland, and grandmother, Elizabeth Tilley, came to America on the Mayflower and landed in Plymouth, Massachusetts. Actually, Howland fell overboard in mid-Atlantic but grabbed a trailing rope and was rescued. Thank goodness, or Philip’s life would be quite different. Howland and his wife had 10 children and 88 grandchildren and several million descendants. It seems like Philip was related to about half the population of Plymouth.

We stayed a few days, ate a lot of seafood, toured the Mayflower Society building and bought family books there. We visited Plymouth Rock and hiked through the ancient cemetery until we found Howland’s grave. I loved visiting this charming historical community and was sorry to leave.

My husband has the most amazing collection of ancestors. I often tell him that I am so jealous as I am just from a family of potato growers in Northern Ireland. I do genealogy but he has all the history. The Champlin family genealogist says the Champlins are like the Forrest Gumps of American history.

Another multiple great grandfather was Captain John Dennison of Stonington, Connecticut. We visited the Dennison Homestead in what is now Mystic, Connecticut, met more relatives and joined the family society. Dennison fought with Oliver Cromwell, came to America and he continued to fight wars over here. He won and is now celebrated as a hero of colonial Connecticut.

Actress Julia Roberts put Mystic, Connecticut on the map with her 1988 movie. So we had to have lunch at Mystic Pizza followed by a tour of the Mayflower replica being renovated in the nearby Mystic Seaport. Philip finished the day off with another lobster roll at a snack shack by the water in this seaside community.

We soon reached New Haven, the home of Phil’s alma mater, Yale University. We had a whirlwind time attending lectures, panel discussions, banquets and meeting classmates and old roommates. The first program was given by a classmate, a retired physician, who is an advocate of physician assisted end-of-life procedures. The program was informative but a little somber as a subject for the reunion opening.

I remembered an earlier column and suggested that classmates thinking about ending their lives, write their own obituaries before they did so. I told them that many Napans responded to my column in the Napa Valley Register. Several couples came up to me later and thanked me for the suggestion. I felt very brave addressing those sophisticated Yalies on the microphone.

You might remember my column Motel Roulette. On this trip, there were two motel experiences that could have been in that column. In New Haven, we stayed in a nice motel suite. On our last night, a guest had a party in his neighboring room after a wedding reception. Rap music, with a heavy drum beat, vibrated through the vent system until midnight. Philip walked the parking lot with the security person and found them, drinking and dancing through open drapes.

Our next experience involved a lady in a hallway, but that will have to wait until we get to Gallup, New Mexico. After a night of singing the Wiffenpoof song at Mory’s, we left Yale the next morning to visit old Navy friends in Virginia Beach, Virginia.

Our friend Ed is a retired admiral who was an early commanding officer of the nuclear aircraft carrier, U.S.S. Dwight D. Eisenhower, or the “Ike” as it is known. The Ike was leaving Norfolk for its 15th deployment to the Persian Gulf. Our hotel was on the beach and we saw it sail right past us with F-18 fighter jets flying overhead all night, to land on it at sea. In Virginia Beach, they call the sound of jets, “The Sound of Freedom.”

At dinner, we met more of Ed’s Navy friends. As we walked into the restaurant we met “Joe,” who as we shook hands, said, “I know all about you Champlins.” At first, we thought he was kidding but it turned out his first cousin is Sarah Dunlap Galbraith, the wife of St. Helena Mayor Allan Galbraith and the niece of Philip’s former law partners, Frank and John Dunlap. Joe had visited the Coombs Ranch many times here in Napa. Sarah is my close friend and a faithful reader of my column.

“Joe” turned out be retired Admiral Joseph Prueher, former vice chief of naval operations and, after his retirement, U.S. ambassador to China. We talked more about the Dunlap family than his Navy and diplomatic career. During dinner, his wife whispered to me that he is really enjoying their new farm over on the Eastern Shore. After years at sea and flying jets, he has turned to farming. Since childhood, he had always wanted a John Deere tractor and he finally got one. Our 5-year-old grandson Simon Finn Eisele and Joe share a love of mini John Deere tractor toys.

After Virginia Beach, we turned West and headed home. We stopped briefly in Brunswick County, Virginia where some more of Philip’s ancestors settled in the early 1700s and then visited one of Philip’s favorite cousins in Oklahoma City.

Gallup, New Mexico is a favorite stopping point. We enjoy the Native American history of that part of the Southwest. We have attended the Inter-Tribal Ceremonial at Red Rock Park in Gallup and toured the ruins of ancient civilizations in the area.

We stayed in a nice Gallup motel and settled in our room for the evening. About 2 a.m., we were awakened by sounds in the hallway. Guestroom doors were opening and shutting. I got up to see what was happening. There were two women outside our door. One was visibly under the influence. The other was trying to help her find her room. I suggested they check at the front desk and they left. The next morning we heard the rest of the story. The drunk lady was a guest and the one helping her was the night clerk. The employee finally got the drunk lady back to her room. But two hours later, the guest was out in the hall again. This time, she was naked and the Gallup Police were called.

After weeks of learning about Philip’s dead relatives, I finally was about to meet a living relative of mine in Flagstaff, Arizona. I had my DNA done by Ancestry.com and it matched a lady in Arizona. I contacted her and we discovered that we were second cousins and both shared an interest in our family history.

Her husband is a retired Arizona Highway Patrolman and they are a Mormon family. His ancestors were part of a handcart party. They were stranded in winter storms and Philip’s great, great, great grandfather, Brigham Young sent out a rescue party who found them and brought them into Salt Lake City. Once again, it’s a small world.

Cousin Alexa was delightful, and I felt like I had known her for years. We spent hours sharing our family research and pictures. What seemed so strange is that we almost looked like sisters with our coloring and body frame. We are eager for them to come to California and meet the rest of the family.

Six weeks is a long vacation, and our potpourri Spanish stew is still simmering, leaving us with lots of happy memories. I am still putting away clothes that I took but never wore. Funny how that happens to me all the time. I’ll never learn.